Home Economy, Policy & Business The rise of the renminbi in Asia forex

The rise of the renminbi in Asia forex

While the renminbi has a long way to go before it can challenge the US dollar’s financial clout in the Asia-Pacific markets, its influence is clearly growing
28.09.2021
Louis KuijsAsia-Pacific Chief Economist at S&P Global
Lloyd ChanSenior Economist at Oxford Economics

While China’s influence in the global economy has increased, its role in the global financial system in many respects has been remarkably subdued. One important exception to the modest presence in global finance is the growing sway that the RMB has in driving exchange rate movements in other countries.

We quantify the RMB’s role in forex (FX) movements in the Asia-Pacific, relative to that of other major currencies, and find that it has extended its influence in the region over recent years, largely at the expense of the US dollar, while the role played by the euro and the Japanese yen continues to be marginal.

Exhibit 1: The RMB/USD rate has moved significantly, since 2005 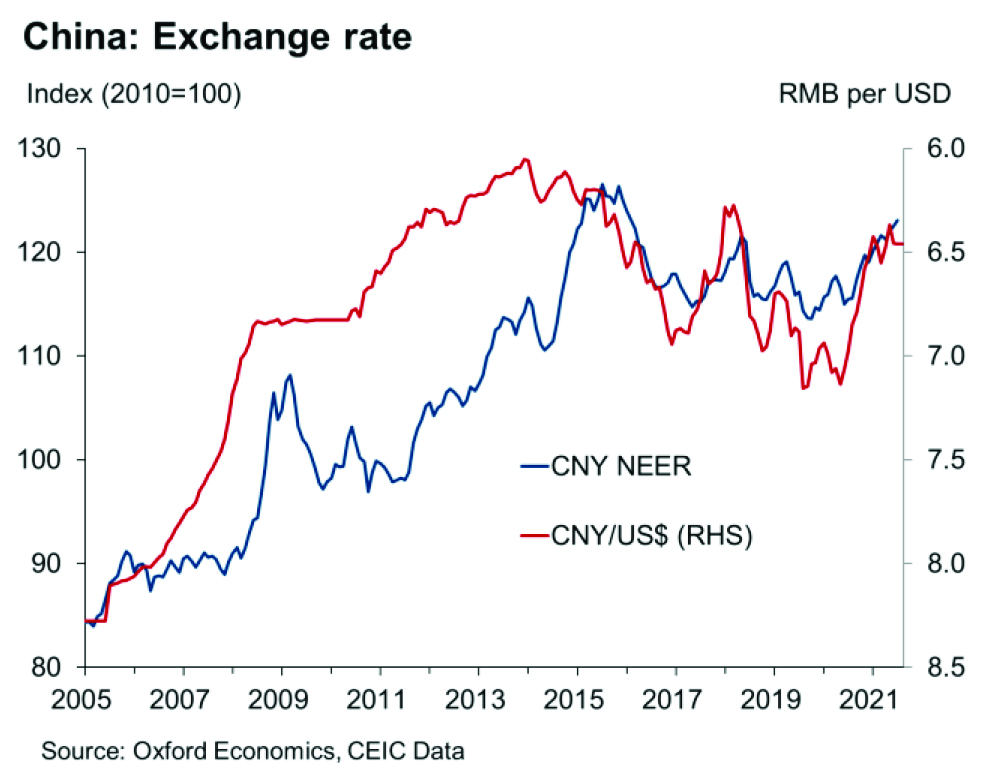 We estimate the role of the USD, the RMB, the euro and the Japanese yen in influencing Asia-Pacific FX movements using the well-known Frankel and Wei (F&W) method. This involves an econometric regression of the changes in the value of each Asian currency against the changes in the values of the four major international currencies. We use the average monthly exchange rates of these currencies, priced in terms of the freely floating New Zealand dollar as numéraire. We start our estimation in July 2005, after China had relinquished the USD peg, and split our sample roughly in half, to compare the results for July 2005-June 2013 with those for July 2013-July 2021. The resulting regression coefficients of these four major international currencies capture their estimated degree of influence on individual Asian currency movements.

After the RMB was de-pegged from the USD in 2005, the People’s Bank of China has regularly intervened in the FX market to influence the RMB rate, including at times to limit changes in the RMB/USD rate. If this intervention systematically supresses movements against the greenback, there may not be enough independent movement in the RMB for its estimated impact to be statistically significant. Kawai and Pontines (K&P) have devised a method to adjust the F&W estimation to deal with such FX management (see Appendix).

We think that the RMB/USD rate has moved sufficiently since 2005, with the notable exception of the Global Financial Crisis, when China locked the RMB/USD rate to limit financial instability (Exhibit 1). This is confirmed by the significant impact we find for the RMB, evidenced by Exhibits 2 and 3, which show the results of the original F&W approach.

But, to confirm our hypothesis we also applied the K&P approach for the period 2013-2021, which yielded broadly similar results. While we think the F&W results correctly identify the impact of major currencies generally, the approach is not well-suited for ‘commodity currencies’ such as the AUD and, to a lesser extent, the IDR.1

Exhibit 2: Increased influence of the RMB on TWD, KRW and SGD 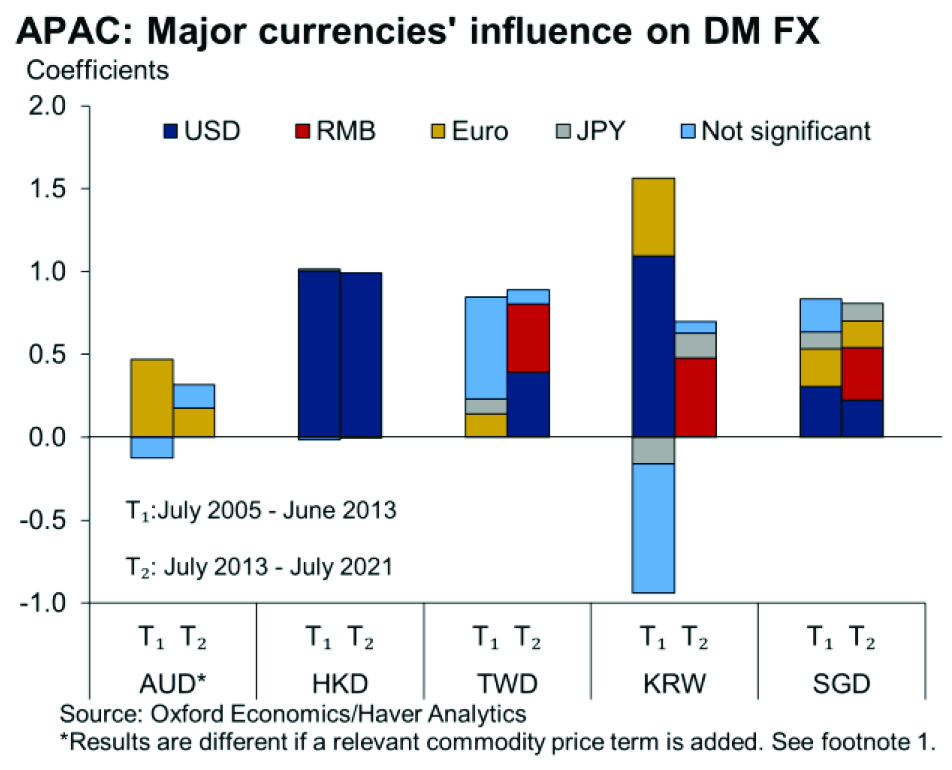 Rising influence of the RMB

In particular, the RMB has become the most important anchor for five of the 11: the won (KRW), Taiwan dollar (TWD), Singapore dollar (SGD), baht (THB) and ringgit (MYR). Meanwhile, the USD has remained dominant for five Asia-Pacific currencies: the Hong Kong dollar (HKD), Indian rupee (INR), Indonesian rupiah (IDR), the Philippine peso (PHP), and the dong (VND). In comparison, the USD was dominant for seven of the 11 Asia-Pacific currencies in 2005–2013, with the RMB being the key driver for only the MYR. We did not find a significant role for the euro and the yen. 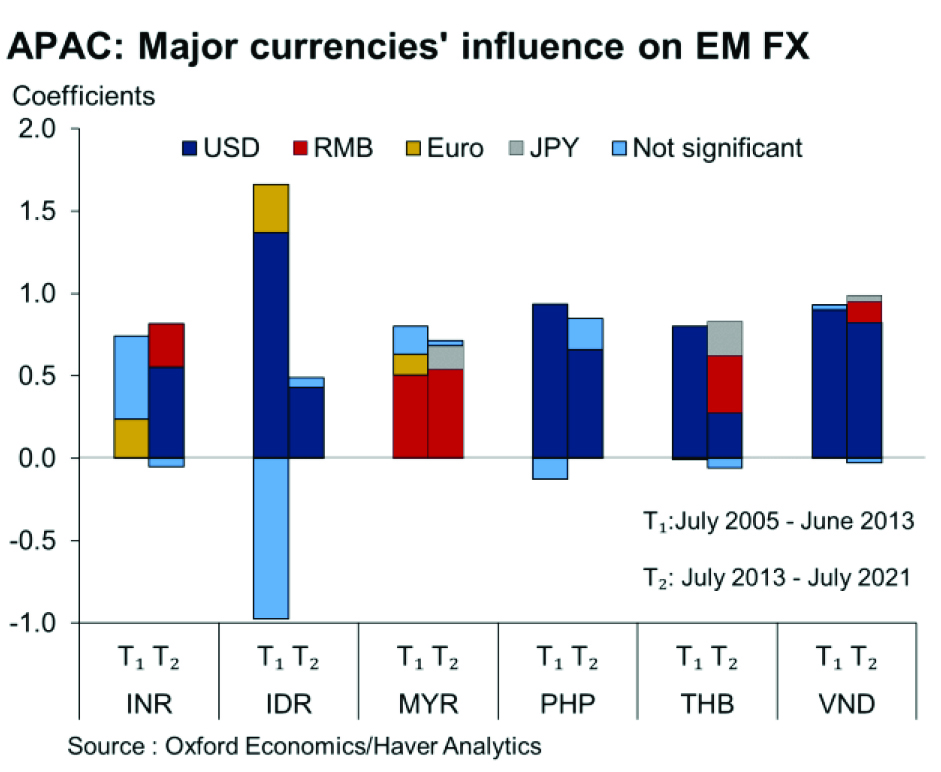 The influence of the RMB is largest where China is a major destination for manufacturing exports. Across Asia-Pacific, many economies have seen the economic importance of China rise, reflected in an increase of exports to the country as a share of GDP (Exhibit 4).2

In economies where manufactured products dominate exports, this has increased the influence of China-related factors: the factors and shocks that tend to move the RMB also move local currencies. Financial markets and capital flows play a key role in this transmission and co-movement, especially at times of abrupt events such as the 2015 RMB depreciation and the escalation of the US-China trade war. There could also be synchronised currency management. It’s no surprise then that the role of the RMB in influencing FX movements is now strong for the TWD, KRW, SGD, THB and the MYR.

Exhibit 4: China a key export partner for many Asia-Pacific economies 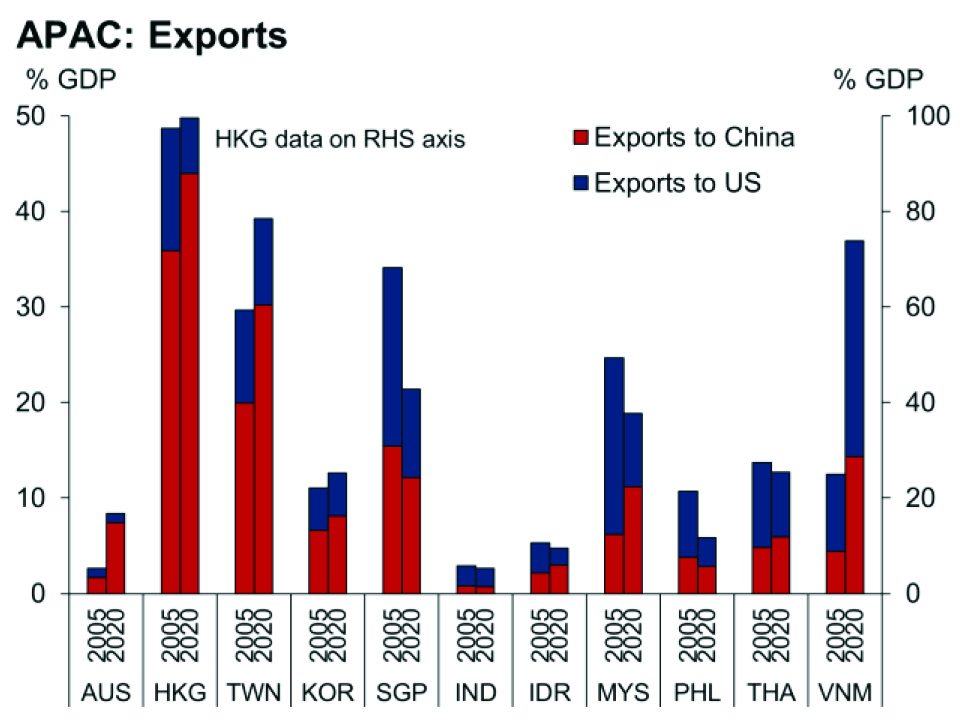 However, for India, the share of exports to China relative to GDP has remained very small. For Indonesia and the Philippines, the importance of manufacturing exports to China for the overall economy has also remained modest. Therefore, it’s also not surprising that the estimated impact of the RMB on the currencies of these economies remains minor.

We find the influence of the RMB on currencies is weak in economies where raw commodity exports make up a large share of total exports, such as Australia and to some extent Indonesia. In reality, the currencies of commodity exporters tend to be heavily influenced by commodity prices, which are globally priced and traded in USD. Thus, even if, as in the case of Australia, a large share of its exports goes to China, the impact of China-related factors such as the RMB tend to be ‘drowned out’ by commodity price swings. This is so even though China’s demand is important in driving international commodity prices. Indeed, the estimated impact of the RMB on the AUD and IDR is negligible; whereas, if we add a commodity price term for the AUD, it is the dominant determinant. The results from the K&P approach suggests that the coefficient for the RMB is sizeable for the AUD and IDR. But we cannot rule out that this is an overestimate.

Malaysia has sizeable commodity exports, and the MYR is influenced by the oil price. But the role of exports of manufactured products to China is large enough for the RMB to matter greatly in terms of MYR movements.

Focusing on the relative role of the RMB and the USD, a rise in the relative importance of China as an export market compared to the US tends to lead to a larger estimated role for the RMB relative to that of the USD. Indeed, in economies with a higher share of exports to China than exports to the US, we find that the relative influence of the RMB is generally stronger, such as in the case of the KRW, TWD, SGD, MYR and THB.

Comparing our main findings with the results of an IMF Working Paper of 2018, our updated results differ considerably, most likely because we use more recent data. Overall, we find the influence of the RMB is larger for the 11 Asia-Pacific economies we consider. The IMF study used the K&P approach and monthly FX rates from 1969-2015, while the results reported are based on the average of the monthly coefficients from 2011-2015.

We expect the trade-oriented importance of China to strengthen further for many economies in the Asia-Pacific region. We forecast China’s trend growth will continue to exceed that of the US in the coming two decades.

Also, in spite of fears among some, we don’t expect China’s growth to turn inward significantly. We expect China’s imports into its domestic economy will continue to broadly grow in line with its domestic demand, suggesting that there’s scope for the importance of exports to China to rise further, at least compared to that of exports to the US. Moreover, despite a general slowdown in globalisation, governments in the Asia-Pacific region generally seem keen to continue to expand intra-regional trade, as evidenced by the signing of the Regional Comprehensive Economic Partnership (RCEP) agreement late last year, which does not include the US.

However, we think the US dollar’s financial clout will continue to support its influence on Asia-Pacific markets. While the global role of the RMB will likely rise as China’s economic heft grows and the gradual opening of its financial sector and capital account continues, it will be decades, if ever, before the RMB can truly challenge the USD on this front.

In all, we expect the role of the RMB in Asia-Pacific FX markets to rise further in the coming decade but still see the USD continuing to hold sway. 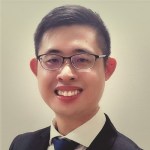 Lloyd is an economist for the Asia-Pacific Global Macro Services team. He is responsible for conducting macroeconomic research and forecasting with a focus on the East Asia region. Prior to joining Oxford Economics in May 2019, Lloyd spent three years at United Overseas Bank (UOB) in Singapore. Before joining UOB, he worked as an economist at BMI Research.