No signs yet of China’s growth turning inward

There’s little evidence of a decoupling by China’s economy from the outside world, but some countries have seen their exports to China grow more than others
31.08.2021
Louis KuijsAsia-Pacific Chief Economist at S&P Global

There is little evidence so far that developed countries are decoupling from China, judging by the country’s export performance in the last two years.

But what about decoupling by China? Is, as some fear, China turning more inward, with its growth becoming less import-intensive?

Not obviously, our analysis shows. Imports used in the domestic economy have largely grown in line with domestic demand (Exhibit 1), suggesting little trade-oriented decoupling by China so far. But we also find that some countries’ exports to China have done significantly better than others’. 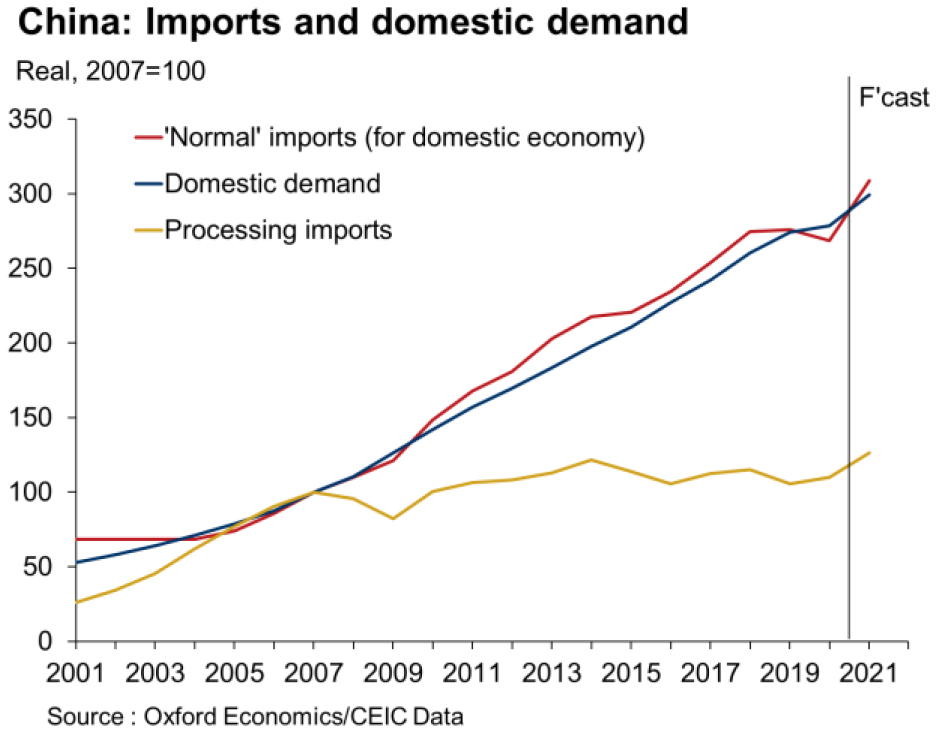 The importance of international trade to China’s economy has trended downwards since peaking in the mid-2000s. The export to GDP ratio fell to 18.6% in 2020, from 36% in 2006 (Exhibit 2). This illustrates that China’s economy has increasingly become dependent on domestic demand, rather than exports.

The decline, however, is less pronounced for imports than for exports, especially once we exclude the import of components processed in China’s “processing” sector, which serves final demand in other countries. The remaining “normal” imports—which go to the domestic economy—were 13.4% of GDP in 2020, compared to 17.5% a decade earlier.

Exhibit 2: Trade has declined in importance 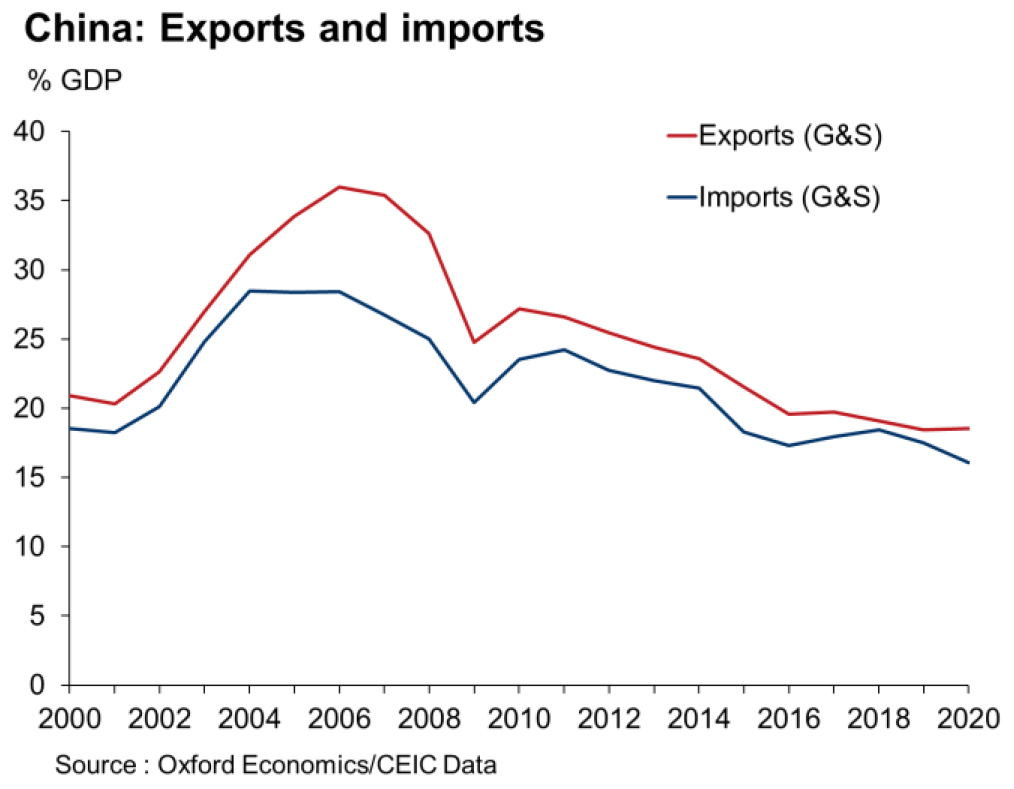 Relative price changes and the economy’s outgrowing of international trade have driven the decline in the share of external trade. Since the 1990s, prices of exports and imports have grown more slowly than domestic prices, although relative prices bottomed out around 2016 (Exhibit 3). 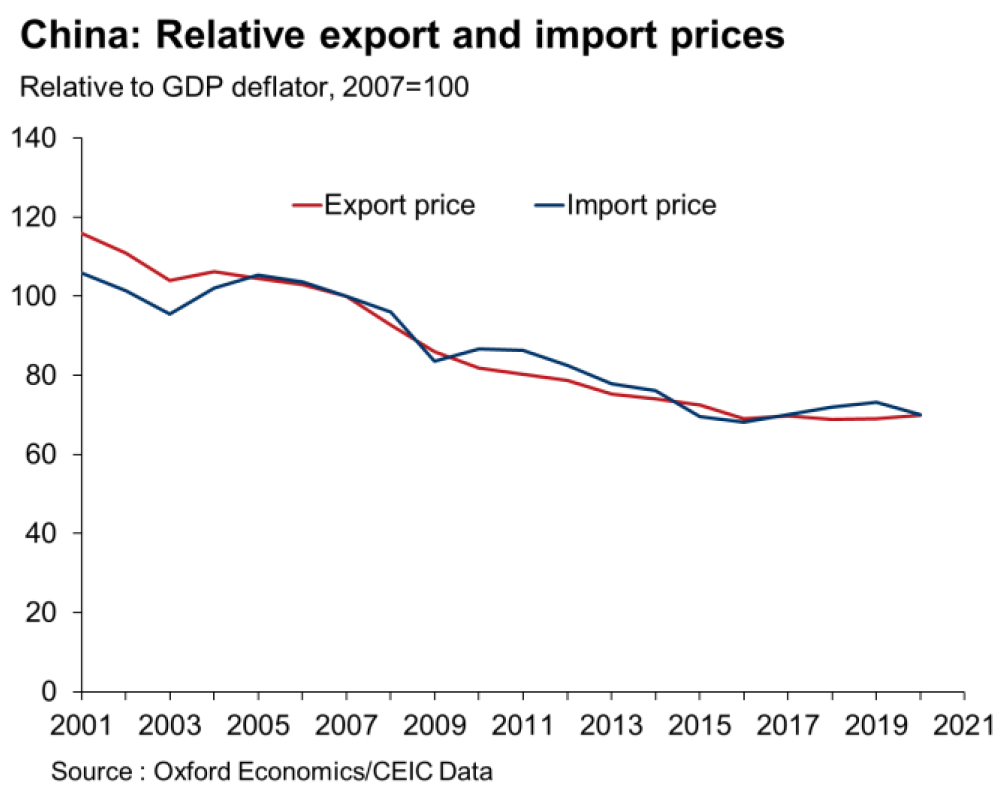 And, after outpacing China’s GDP for a long time, trade volumes more recently have lagged China’s growing economy, with exports trailing since the Global Financial Crisis (GFC) of 2008 and imports having started to lag more recently (Exhibit 4). 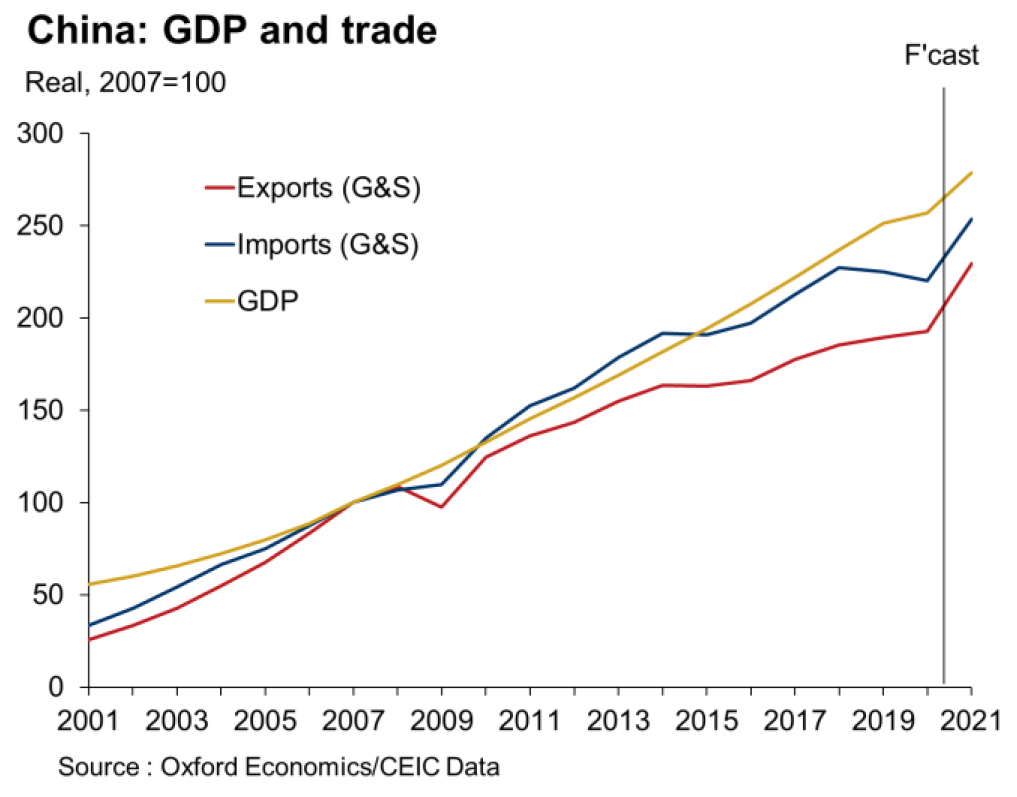 The decline in the importance of trade doesn’t necessarily say much about growth becoming more inward-looking. To assess whether China’s growth has become more inward-looking, we compare import growth with spending in the economy. Overall imports (of goods and services) largely kept pace with China’s total final expenditure (domestic demand plus exports) in real terms through around 2015. But it started to lag in 2015, slowing especially in 2019 and 2020.

The key reason for the slowing import growth is the diminishing role of the processing sector. In the 1990s and early 2000s, China’s processing sector expanded rapidly as global supply chains were routed via its manufacturing sector. Since the GFC, however, processing exports have grown more slowly. As a result, processing imports have also been sluggish, trailing overall imports and the rest of the economy.

Other factors have weighed on imports too.

Domestic inputs. As China has moved up the value chain, domestically produced components and goods have substituted imported ones, both at the level of manufacturing inputs and final consumption. Consumers have sometimes also embraced national brands for “patriotic” reasons.

Rebalancing towards consumption tends to weigh on imports, as consumption is less import-intensive than investment, especially compared to real estate and corporate investment. Thus, when progress is made on the rebalancing front, “normal” imports don’t follow domestic demand as closely as when growth is led by investment.

Service imports decline. Recently, amid the COVID pandemic and subsequent international travel restrictions, China’s imports of services plunged (Exhibit 5), as outbound tourism tanked. But this decline has been partially offset by increased imports of goods amid a boom in sales of foreign luxury products. 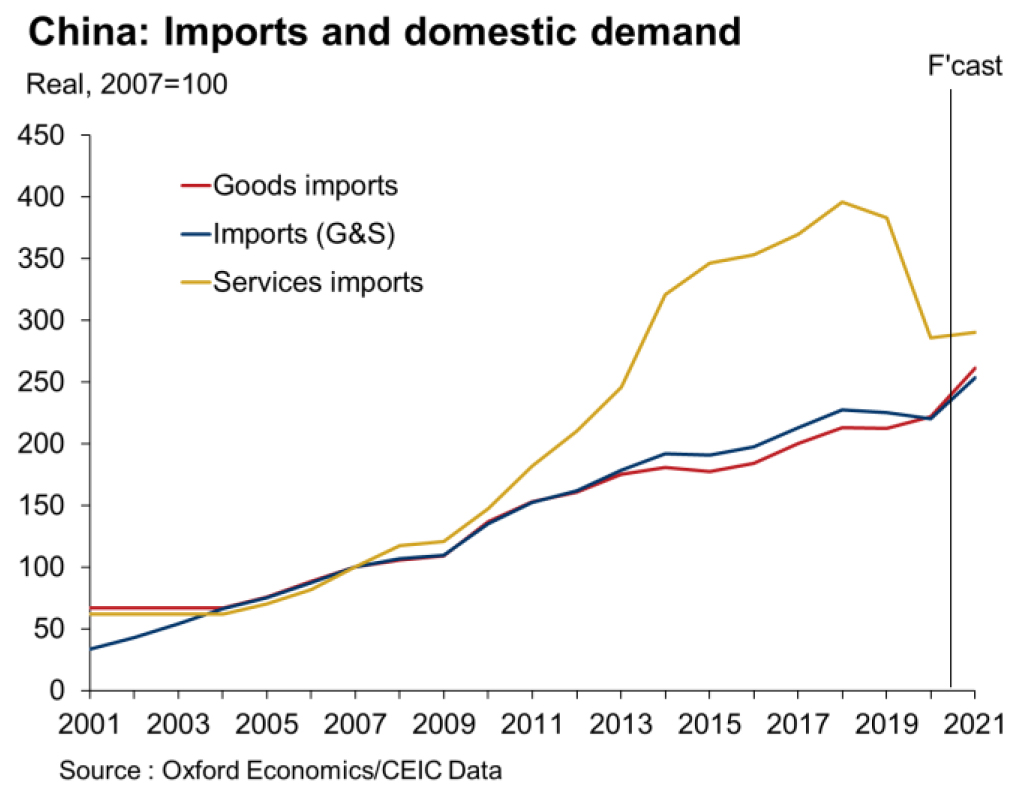 But there are offsetting forces. Household income growth tends to lead to more interest in foreign products. Greater emphasis on environmental protection can also support imports, as is the case of coal, where imports of cleaner, higher-grade varieties have increased to replace more polluting domestic coal. Further opening up of the economy supports imports – average import tariffs have decreased in recent years, even as tariffs on imports from the US have spiked.

Overall, there’s little evidence of a decoupling by China’s economy from the outside world.

But some countries have seen their exports to China grow more than others.

Due to the US-China trade war and the heavy tariffs imposed on US exports to China, the share of North America in China’s total imports has fallen to 7.6% in 2020, from 8.6% in 2018 (Exhibit 6), although it has recently recovered somewhat.

Exhibit 6: Some gain, some lose 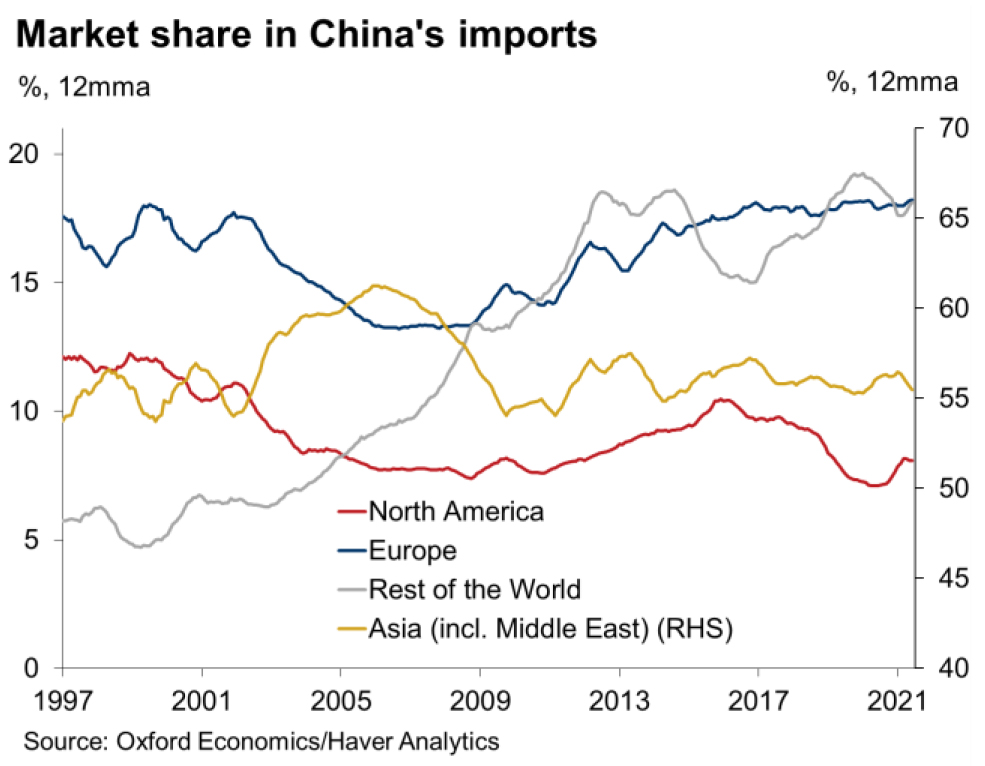 Asia’s market share fell from 66.4% in 2006 to around 56% in recent years, in large part due to the diminishing role of processing trade, which had boosted imports from other Asian economies earlier on.

Indeed, Japan, South Korea and Taiwan have seen their market share fall since the mid-2000s, mostly due to the shrinking role of processing trade. But the declines seem to have bottomed, with Taiwan’s share in particular on the rise again recently.

Separately, ASEAN has seen a steady rise in its market share, with Vietnam’s share having risen particularly rapidly, and that of Indonesia and Malaysia too (Exhibit 7).

The Middle East, which is included in Asia in China’s trade statistics, has a market share of around 4-7%, due largely to oil and gas exports. 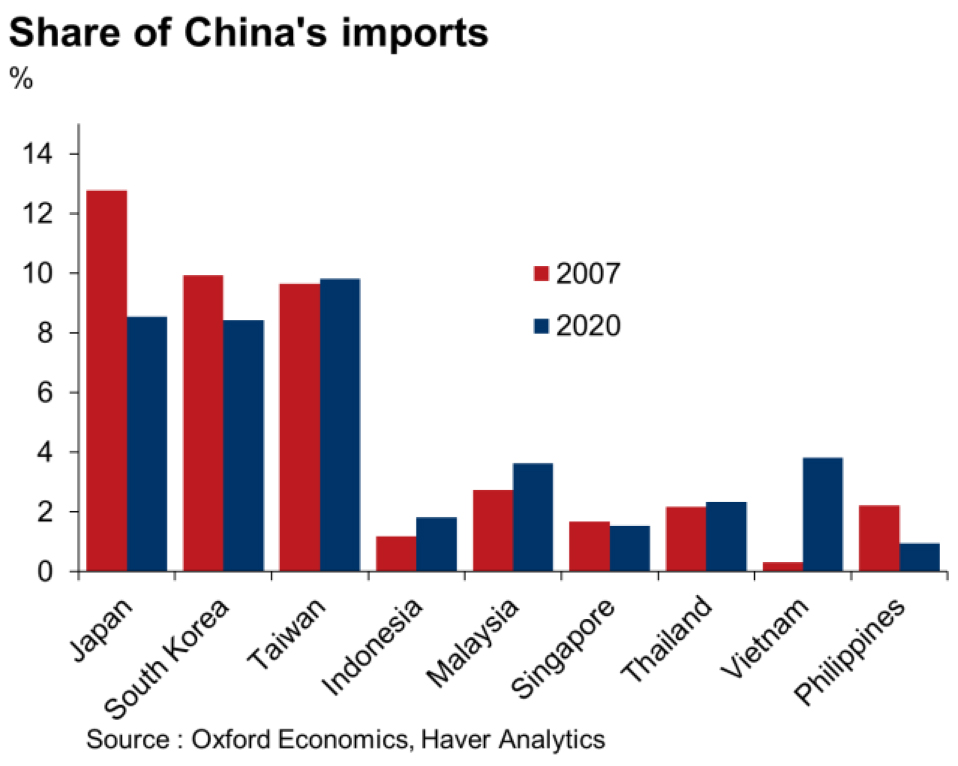 Thus, exports to China of individual economies have evolved substantially, the result of both specific competitiveness and structural changes such as the declining role of processing trade, rebalancing and consumption trends.

Looking ahead, we expect China’s movement up the value chain, rebalancing towards consumption and embrace of national brands to put downward pressure on normal imports.

Overall, while there is a risk that China’s growth will turn more inward-looking, our baseline assumes normal imports will continue to grow broadly in line with domestic demand in coming years. While changes in shares of individual countries in China’s imports are hard to predict, ASEAN countries should be particularly well-placed to benefit from future import growth in China.