Japan’s next prime minister will need to consider the failures of Abenomics in addressing endemic structural issues in the economy
21.09.2021
Shigeto NagaiHead of Japan Economics and Chief Representative in Japan, Oxford Economics

The world's busiest pedestrian crossing, Shibuya Crossing in Tokyo. Japan’s middle class seems to be disappearing in terms of both household income and wealth. Photo by Daryan Shamkhali on Unsplash.

The latest survey of Japan’s households shows the stark failure of Abenomics to boost household wealth through asset price growth. As the ruling Liberal Democrats choose a new leader, the party will need to consider why monetary easing has failed to reflate wealth and, alongside stagnant wages, consumption.

The National Survey of Family Income and Expenditure conducted every five years by the Statistics Bureau of Japan, showed that from 2014 to 2019 under Abenomics, average household net wealth (real estate and financial asset/debt) per household in Japan fell 3.5% to ¥28.3 million (about $0.26 million), while average nominal household income rose marginally by 3.6%.

Exhibit 1: Changes in net wealth per household by wealth deciles 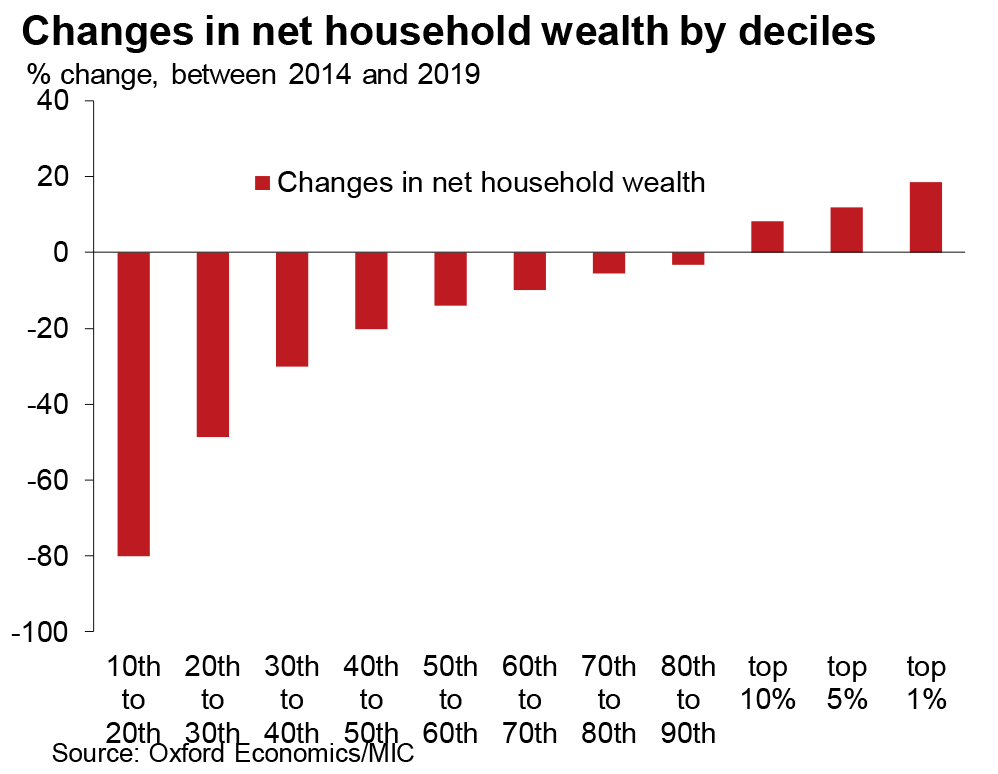 Distribution of households by the size of net wealth

Japan’s middle class appears to be disappearing in terms of both household income and wealth.

Among households with net wealth less than ¥15 million, a notable change was a sharp rise in the number with almost zero or negative wealth. The share of those with net wealth less than ¥250,000 rose from 11.4% to 16.3%. In 2019, the negative wealth of this group was ¥3.7 million of which ¥10.1 million was financial debt. Household wealth data confirm that poverty is increasingly becoming a problem in Japan. 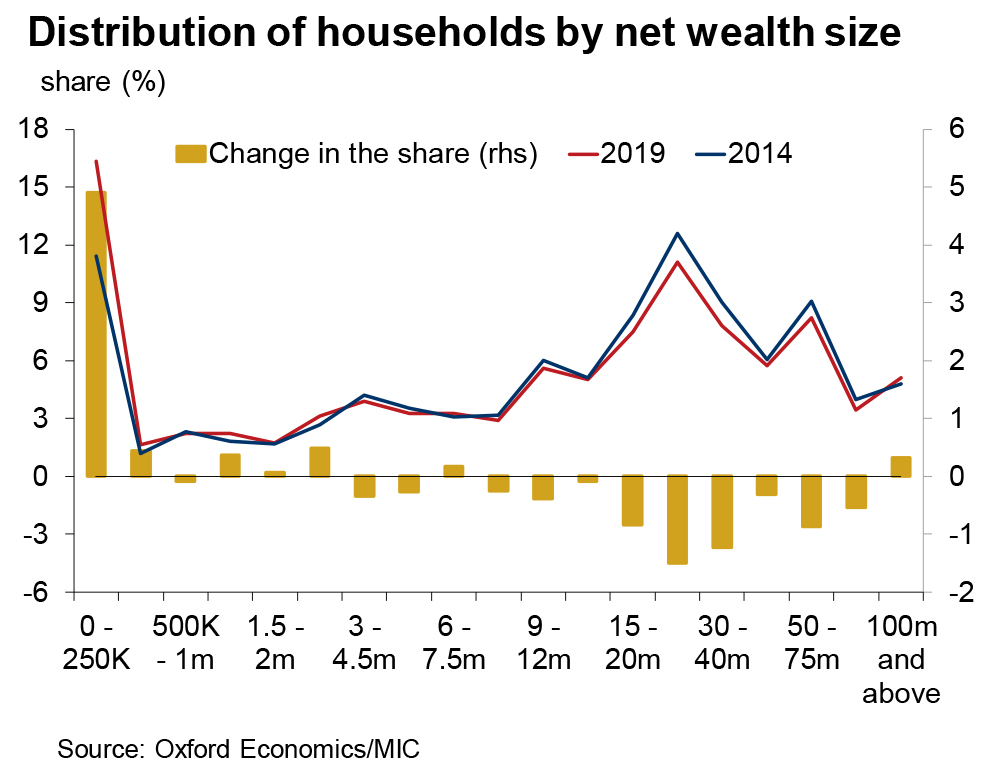 Real estate also drove the divergence of net wealth changes among households. Although real estate rose by 3.5% on average, only the wealthiest 20% enjoyed positive growth (Exhibit 3). Most of the positive growth in the net wealth of the top 10%, 5% and 1% came from real estate, mainly from properties they reside in rather than those owned for investment. For the 70th-80th wealth decile and below, real estate made a negative contribution, and the drag was larger for lower deciles.

Exhibit 3: Breakdown of changes in net wealth by assets and debt 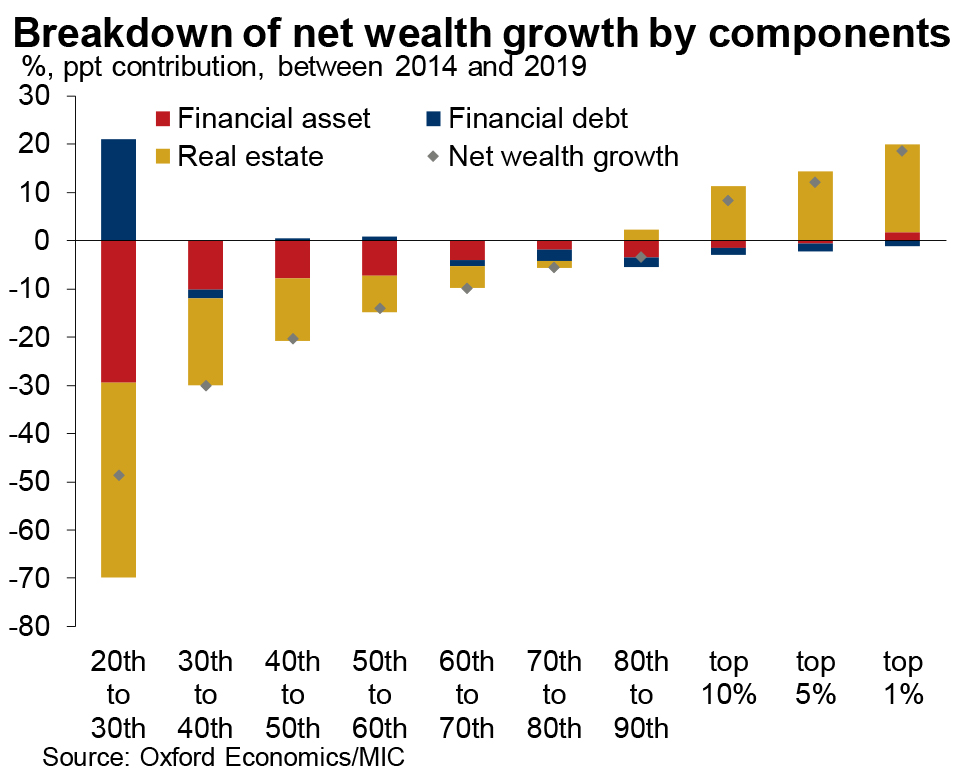 Real estate has driven the divergence of net wealth changes among wealth deciles. Real estate made positive contribution to net wealth of top tiers but negative contribution to lower deciles. This reflects the polarisation of real estate prices in recent years. While the overall residential property index rose by around 11% from 2014 to 2019, those who managed to own expensive properties enjoyed a higher rise in value. An estimation by a research firm clearly illustrates the difference in price changes between properties in the bottom 10% price decile and the top 10% decile after controlling for quality.

While adverse demographics (an aging population, which is also shrinking due to low birth rates) are negative for overall residential property demand, the prices of expensive properties in cities, especially luxury apartments, have increased sharply. In addition to a demand shift from detached houses in suburbs for young families to more convenient apartments in urban areas for seniors, a rise in double-income couples also added demand for residences in cities.

Low interest rates have also led to investment demand, both domestic and global, for luxury apartments in city centres with good access to public transportation. Increasingly, limited supply of land in cities has pushed new luxury apartment prices up further.

Financial assets made a negative contribution across deciles (Exhibit 3). The overall 8.1% decline is mostly from fixed-term deposits (7.7 percentage points) and insurance (3.2 percentage points). Households shifted away from these products because of their diminishing returns under Abenomics. Both short-term and long-term interest rates declined further due to the Bank of Japan’s easing measures, including the negative interest rate and yield curve control policies. More importantly, as evidenced by a limited rise in other financial assets, the overall decline in financial assets reflected diminishing disposable income due to stagnant wages and rising social security costs.

Despite increasing equity prices, the contribution of securities investments—including equities and investment trusts—was negligible. Although the top 1% and top 5% wealth tiers enjoyed a 13% increase in securities investments, this raised their wealth only modestly. Financial assets play a limited role in raising household wealth because of the risk-averse investment style of households in Japan, with very little exposure to securities investment. In the US and Europe, on the other hand, nearly half of household assets is held as cash and deposits, and more than 20% is claims to insurance companies and pension funds.

The impact of financial debt on net wealth changes was almost negligible for the middle and upper deciles. Taking advantage of aggressive monetary easing, financial debt rose sharply for the upper deciles (80% for the 80th-90th decile and 52% for the top 10%). However, the amount of debt was not significant enough to make a visible contribution to net wealth.

Given that around 60% of households own their houses, purchasing houses and repaying mortgage loans is a dominant driver of the lifecycle of household wealth (Exhibit 4). Net wealth increases as households get older. The share of 65+ year-olds in the top 10% wealth decile was 60.9% in 2019. 35–44-year-olds had the largest financial debt (of which 84% was mortgage debt) and the debt is gradually repaid as they get closer to retirement. As mortgage debt is repaid, 55–64-year-olds focus on building up savings (financial assets) to prepare for retirement. After almost reaching a peak when households reach their 60s, net wealth then changes only marginally when they turn 70 and 80.

Our interpretation is that working-age households had a better chance of purchasing expensive apartments and benefited more from the polarisation in real estate prices. They also fully took advantage of super-low mortgage rates as evidenced by the sharp increase of mortgage debt among 35–44-year-olds (18%) and 45–54-year-olds (13%).

Exhibit 4: The changing composition of net wealth by ages 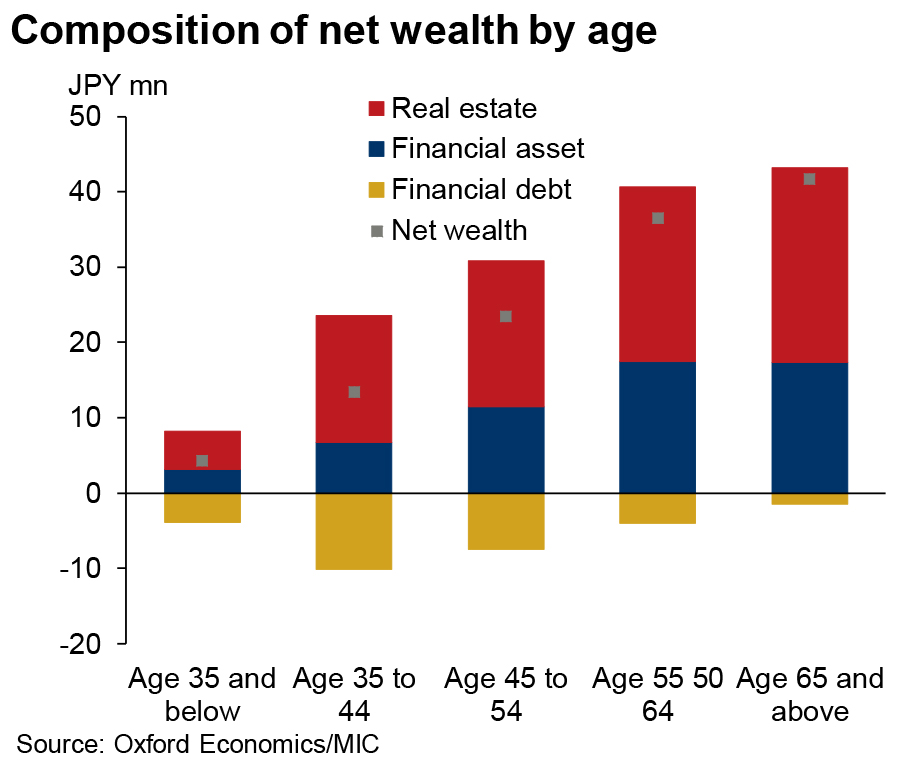 In retrospect, Abenomics has clearly failed to achieve strong growth and reach 2% inflation because the policies were not able to establish positive feedback between corporates and households, and thus boost domestic demand. Although Abenomics initially spurred corporate profits and sentiment through a weaker yen and higher stock prices, its positive momentum fizzled out without a significant increase in wages.

Stagnant—or falling—household wealth has also depressed domestic demand. Average household net wealth declined as the modest increase in the top tiers has not been sufficient to compensate for an across-the-board decline in the other wealth deciles. Why did Abenomics fail to reflate household wealth through asset price increase? In our view, households have not benefited much from the strong recovery in equity prices because of their risk-averse investment approach. While a sharp rise in expensive real estate properties, especially luxury apartments in cities, has benefited wealthy households, overall real estate prices have remained stagnant against the background of adverse demographics and disappointing economic growth. The polarisation in real estate prices has also exacerbated rising economic inequality.

This month, the ruling Liberal Democratic Party (LDP) will choose a successor to Yoshihide Suga. Given the LDP’s grip on power, the new leader will most likely be Japan’s next prime minister following elections to be held before the end of November. We think the new premier will need to consider the failures of Abenomics and recognise that reflation policies relying on aggressive monetary easing will not solve all of Japan’s problems without tackling endemic structural issues, such as boosting household wealth and driving consumption. 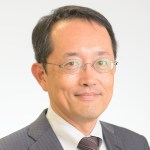