Government leaders are optimistic that COVID-19 is becoming endemic, meaning more predictable and manageable. But many scientists say it’s too soon to behave like the pandemic is over
29.11.2022
Claire KlobucistaDeputy Editor at Council on Foreign Relations

Walkers rest at a park in New Delhi. Photo by Dollar Gill on Unsplash.

What does “endemic” mean?

Epidemiologists say a disease is endemic when its presence becomes steady in a particular region, or at least predictable, as with seasonal influenza. But there’s no consensus on the conditions for meeting this benchmark. By this broad definition, endemicity doesn’t necessarily mean a disease is rare or common, mild or severe. For example, infection rates can still be high; they just have to remain static. Malaria, which is endemic in dozens of countries, mostly in sub-Saharan Africa, killed more than six hundred thousand people in 2020.

It’s easier to define endemicity in retrospect, when scientists are able to determine a baseline level because the disease has reached an equilibrium. This can be possible when the general population has protection from the disease, whether from vaccination or prior infection.

An endemic disease can still (and often does) require a robust policy response. The United States and many other countries urge individuals to get a flu vaccination each year, and they promote practices such as frequent handwashing and covering one’s mouth and nose when coughing or sneezing. For malaria and HIV, which is also endemic, various global initiatives are ongoing to develop more effective and accessible prevention tools. However, the responses are typically not as intense as those during a pandemic, when surging infections prompt the type of tight restrictions seen throughout the COVID-19 crisis.

Is COVID-19 becoming an endemic disease?

It’s still too early to tell. Many government and industry leaders are promoting policy shifts in that direction, but officials from the World Health Organization (WHO) and other health experts have warned against treating COVID-19 as an endemic disease. By the end of 2022, there were several hundred thousand new infections and hundreds of deaths being reported worldwide each day, and new variants of the virus continued to emerge. However, with new vaccines and treatments, the number of people dying from COVID-19 had gone down dramatically. The WHO didn’t declare any new strains of omicron a “variant of concern” in 2022, and by year’s end, none had produced the kind of toll the world saw with delta or the original strain of omicron. 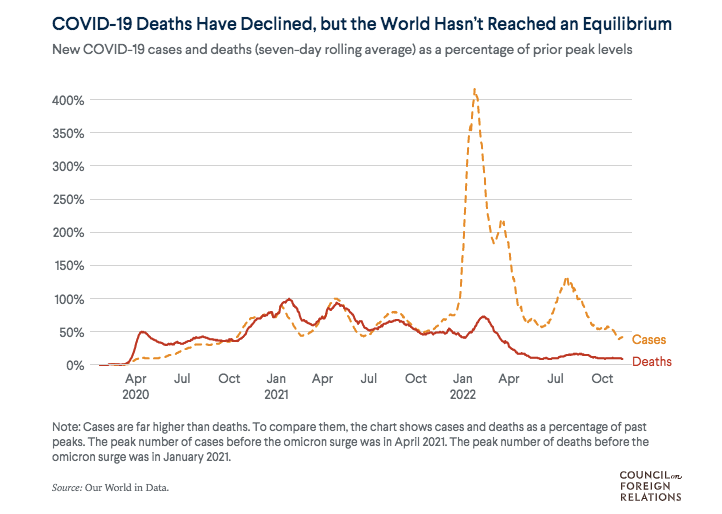 “It could mean we’ve hit this point where molecular evolution has played out its hand, or it could be this is the quiet before the storm,” the University of Minnesota’s Michael Osterholm tells CFR.

The world has made significant progress immunising against COVID-19, but roughly one-third of people have yet to receive a vaccine dose, and the vaccination rate has slowed. At the same time, health experts have raised concerns about waning immunity in vaccinated people and vaccines’ reduced effectiveness against new variants. 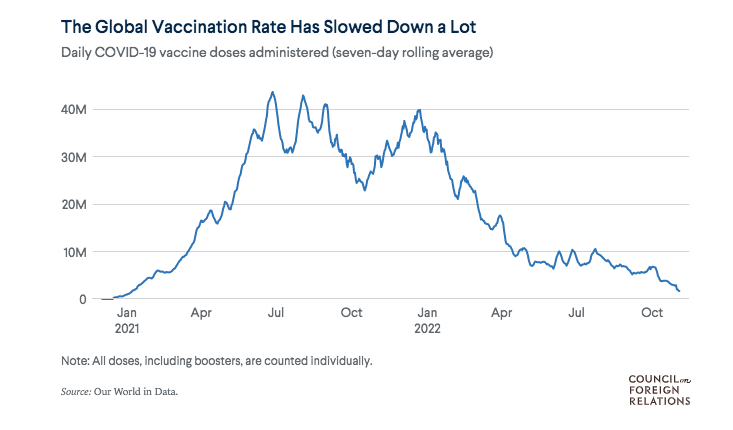 Some countries are already treating COVID-19 as an endemic disease, while others, namely China, are keeping rigid pandemic measures in place. These policies can depend on infection trends as well as on the social mood, says CFR’s Jennifer Nuzzo. “In terms of when a pandemic is over, it’s really a social term,” she says. “We don’t have an epidemiologic criteria for the end of a pandemic.” Portugal, with among the highest vaccination rates, was an early model for dropping many of the tighter COVID-19 restrictions. Mexico and Spain have also moved toward treating the virus as endemic. And in a September interview, U.S. President Joe Biden stirred debate by stating that “the pandemic is over,” though a federal public health emergency declaration remains in place.

What are the risks of prematurely thinking the pandemic is over?

The predominant risk is that the world will again find itself largely unprepared in the face of a more dangerous variant of the virus, and the possibility remains that a variant could emerge against which existing vaccines are ineffective.

Complacency and government inaction contributed to the devastating surge of the delta variant across India in early 2021. And the United States found itself scrambling as the omicron variant spread like wildfire at the end of that year, without sufficient tests and other supplies to manage the record infection levels. U.S. health officials say the majority of Americans have been infected with COVID-19 at least once, but they caution people not to presume they have protection for the future.

What should governments do until the world reaches an equilibrium with COVID-19?

The best-case scenario is that broad immunity from vaccination and previous infections indeed prompts the transition to endemic COVID-19, but that is just one possibility. Governments should be prepared to handle the worst, such as a case in which the world’s current vaccines are unable to defend against a new variant.

The WHO continues to advocate for vaccination, particularly across Africa and parts of the Middle East where small portions of the population are immunised. Experts including Nuzzo and Osterholm also urge dedicating more resources toward developing vaccines and treatments and making them more widely available. Scaling up testing capabilities and improving monitoring and surveillance networks are also high on the list, since having accurate, regular measurements of infection levels in a community allows officials to implement the most effective response. 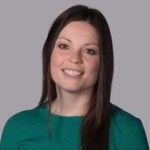 Claire Klobucista covers Africa, global health, and development. Before joining CFR, she was a news writer at Bustle and a fellow at the Pulitzer Center on Crisis Reporting.