What’s behind the growing halal footprint in Southeast Asia?

We speak to an expert about the reasons for a booming halal industry in Southeast Asia
07.09.2020
An interview with
Siti Noorbaiyah Abdul MalekAssociate Professor at the Singapore Institute of Technology

A street vendor sells halal labeled coffee in Ho Chi Minh City, Vietnam. Even the non-Muslim population in ASEAN is very aware of halal, and therefore represents a huge market for halal products beyond the Muslim population. Photo by Shutterstock.

The halal industry is booming in Southeast Asia. Literature around the industry, however, is scant. In this interview, Dr Siti Noorbaiyah Abdul Malek, Associate Professor at the Singapore Institute of Technology’s Chemical Engineering and Food Technology Cluster, speaks with Siddharth Poddar and Shivaji Bagchi of Unravel about the reasons behind the growing popularity of halal products in the region, the sectors driving this growth and the less talked about non-Muslim market for halal products.

Unravel: What is responsible for the growing popularity of halal produce/ products in Southeast Asia?

Siti Noorbaiyah Abdul Malek: Several factors contribute to halal’s popularity. Just to give you a brief overview of the halal market globally, according to the State of the Global Islamic Economy 2019/2020 report which focuses on the entire halal trade, Muslim spending on halal food is growing at 6.3% and is expected to be worth about $2 trillion by 2024.

There are a lot of factors for its popularity in Southeast Asia. First, you can see ASEAN from the perspective of consumer awareness. There are a lot of consumers who are aware about halal. Moreover, of the roughly 630 million population in ASEAN, about 50%-60% is the Muslim market. Look at Indonesia, for instance. Of the 275 million population, about 225 million are Muslims. Then you have Malaysia, southern Thailand, the Philippines, Singapore and Brunei. When you put that altogether, it’s about 50%-60% Muslims across ASEAN and these are progressive Muslims. By progressive Muslims, I mean they are educated, they are internet-savvy – they have all this information at their fingertips. So, there’s a lot of awareness.

Unravel: What about the non-Muslim halal market in ASEAN?

Ms Malek: The ASEAN population is young, with about 60% below the age of 35. These people are aware, and they are globally connected through the internet. Even the non-Muslim population in ASEAN is actually very aware of halal. So, you’re not only looking at the Muslim market, but also the non-Muslim market—in particular, the young population—which is aware about halal food and is very open to the concept.

ASEAN has also achieved tremendous economic growth. We are now a trillion-dollar business market and there’s an increase in intra-ASEAN trade. This means that a lot of products are being traded within ASEAN. If you look at Malaysia, Indonesia, Singapore, Thailand and Brunei, there is already a lot of halal manufacturing. The Philippines, Cambodia and Vietnam already have government initiatives to venture into the halal business. If you look at Malaysian food manufacturers, possibly up to 90% are halal certified. Malaysian food products are going to Thailand, Philippines, Singapore, India, Vietnam, Cambodia, Laos and so on. So clearly, there is a growing demand for halal products well beyond the Muslim market.

Unravel: What edge does ASEAN have in the growing halal market?

Ms Malek: There’s a lot of demand here and the region is well connected. There’s a lot of manufacturing capability and capacity. There are also good logistics players, and that allows products to be transported in a timely manner. Singapore offers great logistics, for instance. Any product that reaches Singapore gets re-exported very fast.

Muslim spending on halal food is growing at 6.3% and is expected to be worth about $2 trillion by 2024.

More importantly, ASEAN has a very comprehensive halal ecosystem. Take Malaysia, for example. It has just set up the Malaysia Halal Council (MHC) under the Prime Minister’s Department. This is the government’s initiative to put under one roof relevant government agencies and research institutions to further strengthen, coordinate and manage the halal industry in the country to ensure its robust growth. The MHC, comprising relevant government agencies such as the Department of Islamic Development (JAKIM), Halal Development Corporation (HDC), Department of Standard (DSM) and Halal International Research Academy (HIRA), will allow holistic development of policies, strategies and R&D activities to help boost the country’s reign as the global leader in halal business.

Moreover, you also have a favourable geographical location. ASEAN is located between the two giant markets of China and India. Both countries are trade partners of ASEAN (they have free trade agreements with ASEAN), and are also involved in this mega trade deal, the RCEP; although unfortunately, India may now be out of the RCEP. Notwithstanding, if you look at the RCEP and other mega free trade agreements, it opens up to 60% of the global market.

Within the RCEP, ASEAN has the centrality, in that it is there as ASEAN and not as 10 individual countries. ASEAN can leverage on the strength of this association. Unlike the EU, ASEAN is not a rule-based system. ASEAN has its own unique “ASEAN” way, where we have built solidarity and brotherhood – ingredients that breed unity and integrity. However, when push comes to shove, ASEAN countries always come together to have one collective voice, despite all their differences in opinions.

These are some of the factors helping the halal industry in ASEAN.

There are also a lot of regulatory reforms underway, and there are more moderates now, rather than conservatives. But given the diversity of the region, challenges do exist. For instance, I don’t know whether the rule makers in Indonesia can be called moderate. Maybe the government is, but when you look at the latest situation where it mandates halal for its food industry, and for the pharmaceutical, health and several other industries, then it is arguably not moderate anymore – that seems a very extreme step. But again, that’s an anomaly. The other nine ASEAN member states are still moderate when it comes to religious freedom, and accepting of different dietary laws, such as those governing halal food and beverages. In my opinion, ASEAN is still a solid playing ground for the growth of the halal industry.

Unravel: Following on from that, what are the main sectors that halal impacts? You said that, globally, the food and beverages sector is the largest. What are some of the other areas?

Ms Malek: In terms of the halal market, F&B is the biggest as there has been a lot of development in this sector, including volumes of books and articles dedicated to it. In fact, among the best articles on halal foods is written by Professor Emeritus of Food Science at Cornell University, Joe Regenstein, in the US, who is Jewish.

Apart from the F&B sector, you also have tourism, hotels, hospitality, fashion, and specialised services. Tourism is getting big. When travellers from the Middle East want to spend their money, they look for halal hotels, halal kitchens, whether hotels have praying rooms and the like. So, it is very big business.

The other is pharmaceuticals because, currently, a lot of the drugs or vaccines are porcine-based, which is not acceptable to many Muslims. There’s a lot of research and development ongoing for halal vaccines, halal over-the-counter drugs and other halal medication. Malaysia is leading in this sector as has the manufacturing standards required for the manufacture of halal pharmaceutical products. This has spurred the growth of the sector and now we have pharmaceutical companies, such as Duopharma Biotech Berhad, and others, producing halal pharmaceutical products that are exported to the Asia-Pacific region.

ASEAN has a very comprehensive halal ecosystem. There's also a lot of regulatory reforms underway, and there's more moderates now, rather than conservatives.

Nutraceuticals is another sector, including bio-active products or ayurvedic type of medicines, like traditional Chinese medicine. In some cases, the raw materials used may be halal, but the processing may not be halal-certified. So, there’s a lot of push to go for halal materials in nutraceuticals. Take supplements, for example, such as Vitamin B, Vitamin C, Vitamin D. You need to make sure that those materials come from a halal source. This is a huge market given the growing popularity of health supplements across the region, and given its large Muslim population.

Another important sector is that of food additives and ingredients; and also non-food ingredients. There are several components that make up the ingredients market – such as flavours, colours, emulsifiers and fatty acids, to name a few. These are all billion dollar businesses.

The other area that is really coming up is Islamic banking and finance. There’s a lot of halal investments, halal banks, and even halal auditing and certification in finance.

These are the main ones. 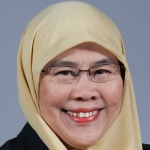 Associate Professor at the Singapore Institute of Technology

Dr Siti Noorbaiyah Binti Abdul Malek is currently an Associate Professor at the Singapore Institute of Technology’s (SIT) Chemical Engineering and Food Technology Cluster. She has served in both public and private sectors. She started her career as an academician and after 20 years, she took up a regional role at the Food Industry Asia (FIA) as its head of regulatory affairs. While holding the post, she was seconded to the ASEAN Food and Beverage Alliance (AFBA) as its first Executive Director. Her primary role in AFBA involved work on harmonisation of food standards and addressing Technical Barriers to Trade (TBT) in the food and beverage sector. Dr Siti is an active member of the Malaysian Institute of Food Technology (MIFT) and was its president for the 2014/2016 term.