Nationalism in China is primarily externally oriented, focused on enemies from outside
20.12.2022
Dr Zheng WangDirector, Center for Peace and Conflict Studies at Seton Hall University

Entrance to the Forbidden City. Photo by Vidar Nordli-Mathisen on Unsplash.

This is the last of three pieces, first published by the UK National Committee on China, that examines the role nationalism plays in China today.

Nationalism has been a well-discussed topic in China over the past few decades.

However, there are different definitions of the term. Nationalism is often seen in the US and by scholars as a negative thing. However, ⺠族主义 (minzuzhuyi – nationalism) is not always seen negatively in China. It is often seen as a positive force to keep people together and make them stronger for positive social change. Indeed, Sun Yatsen used nationalism as one of his Three Principles of the People.

When we think of nationalism, we often think of demonstrations and many people on the streets, such as during the Diaoyu-Senkaku crisis in 2012, when citizens in over 100 cities in China came out to burn Japanese cars and protest.

Scholars have analysed how nationalism shaped their attitudes and behaviours. Over the past 10 years, we have seen a further rise in nationalism in China. This is related to China’s recent achievements and a belief that China is or is going to become number one.

We have also seen the collapse of the US-China relationship, with new sanctions on and criticisms of China. So Chinese nationalism is somewhat ‘responsive’ and China believes it is responding to foreign ‘aggression’ and ‘criticism’. This is particularly so in relation to Covid-19, such as Trump calling it the ‘Chinese-virus’ and many American politicians and media airing very strong criticisms of China. When they criticised China, their target was primarily the US domestic audience, not China. But this rhetoric reaches China, and the Chinese propaganda ministry very skilfully uses this criticism of China to mobilise people. Their actions have been very successful.

How was nationalism used in the 1990s post Tiananmen?

After the Tiananmen student movement, China, like today, also faced stern criticism from the US and the West. The government faced a crisis of legitimacy and in the people’s faith in the communist ideology.

So the government began to use nationalism as the new ideology or at least to fill the vacuum of ideology.

Today’s nationalism is a continuation of this process of using nationalism as ideology to hold the country together. Before that, during Deng’s leadership, he tried to suppress nationalism in order to boost relations with the outside world, especially the Western countries, to achieve the economic reforms he desired.

So the 1990s involved a major transformation in the use of nationalism in China, of which we see the consequences of today. Today’s young people have spent their whole education during a period of rising nationalism. They have received ‘patriotic education’ from kindergarten to college. Many believe today’s young people are more nationalistic than young people 20 to 30 years ago. They are more focused on China’s strategic objectives and have more negative views towards the US and Europe.

Is there a contradiction between the CCP’s use of communism and nationalism?

Nationalism is an effective tool to use. This can be demonstrated by the rise of Donald Trump in the US and the way he employed nationalism and populism to get into power.

How does China use World War II as legitimacy for nationalism today under the CCP?

The CCP’s belief is that only it can save and liberate China and it claims that China’s achievement of national independence and the end of national humiliation are due to the CCP. In recent years, there have been more publications and TV shows of the events of World War II. Compared to the 1960s and the 1970s, there are now many more references to the contributions of the Kuomintang (KMT) to the war victory. Previously, to justify the CCP’s rule, the government emphasised the KMT’s corruption and claimed that China couldn’t have achieved its independence without the CCP. Nowadays, more and more publications, popular culture, and movies have given people more information about the history and the KMT’s role in the victory: and have deemphasises the contradictions between the CCP and KMT as they both defended Chinese national interest.

Moreover, over ten years ago, this was done partly to improve relations with Taiwan and gain credit with the KMT administration there. But relations between the mainland and Taiwan have changed since then and this is no longer an effective strategy.

How does China use popular media to promote nationalism?

The CCP believes that just modifying school education alone is insufficient, and they have extended the “Patriotic Education’ campaign more deeply into popular culture, entertainment, and many parts of daily life. Moreover, school education and textbooks play a much more important role in China than in other countries as almost all schools in China use the same textbooks published by the official press.

In other countries, different schools have more choice over the curriculum. What is new in the last 5-10 years is the use of social media to promote ‘Patriotic Education’. This also includes censorship and the flow of information to make sure people only see approved information. This extends to control of the content of movies and TV shows to expose people to the official narrative of history.

Nationalism in China is primarily externally oriented, focused on enemies from outside.

American nationalism led by Trump is not only that, but also focused on the domestic. And this has created division at home. The rise of nationalism in the US has also shaped its policies towards China. Many recent US policies towards China have not been in the US interest, but have been implemented with the intention of hurting China and being strong and tough to please a domestic political audience. The policies have hurt China, but have hurt the US too.

Nationalism makes people irrational and make decisions against their own interests. The intention becomes hurting the enemy rather than helping oneself.

We are now seeing the interaction between the nationalism of the US and China and how it has contributed to the collapse of the bilateral relationship, leading to the potential of conflict between the two. The current relationship is in my opinion, a ‘Shakespearean tragedy’.

Both countries have common interests and responsibilities, but nationalism plays a very important role in the US and China that has led them to confrontation. It has become a competition in the US Congress on who can be most harsh on China.

What is the main source of CCP legitimacy, nationalism or economic growth?

The CCP’s legitimacy post-Tiananmen comes from firstly, economic growth, the improvement of living standards, and secondly, nationalism. With the economic slowdown, China’s development faces many challenges, internal and external. This includes the pandemic and China’s ‘Zero-covid’ policy. So when the government cannot supply further economic growth or if people’s living standards stop improving, or even start to decline, nationalism might have to play an even more important role in supplying legitimacy for the CCP. For the party, the educational campaign’s most important messages are that only the CCP can make China an independent, united, powerful and wealthy state, and only the CCP can defend China’s national interests and meet foreign competition and hostility. These rising nationalist sentiments are further stimulated by US policy towards China, such as sanctions on Chinese tech companies and actions regarding Taiwan and Hong Kong. 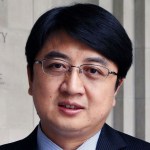 Dr Zheng Wang is the director of the Center for Peace and Conflict Studies (CPCS) and Professor in the School of Diplomacy and International Relations at Seton Hall University. He is also an Abe Fellow of the Social Science Research Council and Japan Foundation. Dr Wang is the author of the book ‘Never Forget National Humiliation: Historical Memory in Chinese Politics and Foreign Relations’ (Columbia University Press, 2012).