Home Economy, Policy & Business What does China’s slowdown mean for the rest of the world?

What does China’s slowdown mean for the rest of the world?

The normalisation of China’s economy is proving bumpier than expected. How will this impact the global economy?
23.11.2021
Françoise HuangSenior Economist for Asia-Pacific at Allianz Trade
Ano KuhanathanSector Advisor and Data Scientist at Allianz Trade
Pablo Espinosa UrielInvestment Strategist at Allianz SE

Industrial port with containers in Hong Kong. Photo by Timelab Pro on Unsplash.

From a global supply perspective, the Chinese economic slowdown could further raise the cost of trade and lengthen delivery delays. In particular, the electricity rationing measures are pushing production costs up, which in turn will raise the price of goods exported from China to the rest of the world and potentially pressure corporate margins, especially in Europe. Potential new outbreaks of COVID-19 in China could also risk pushing supply chain delays even longer. In addition, we do not expect sharp depreciation of the Chinese yuan (CNY) that could compensate for these upward price pressures. Apart from price effects, slower industrial and manufacturing activity in China could worsen production shortfalls issues in the US and Europe. 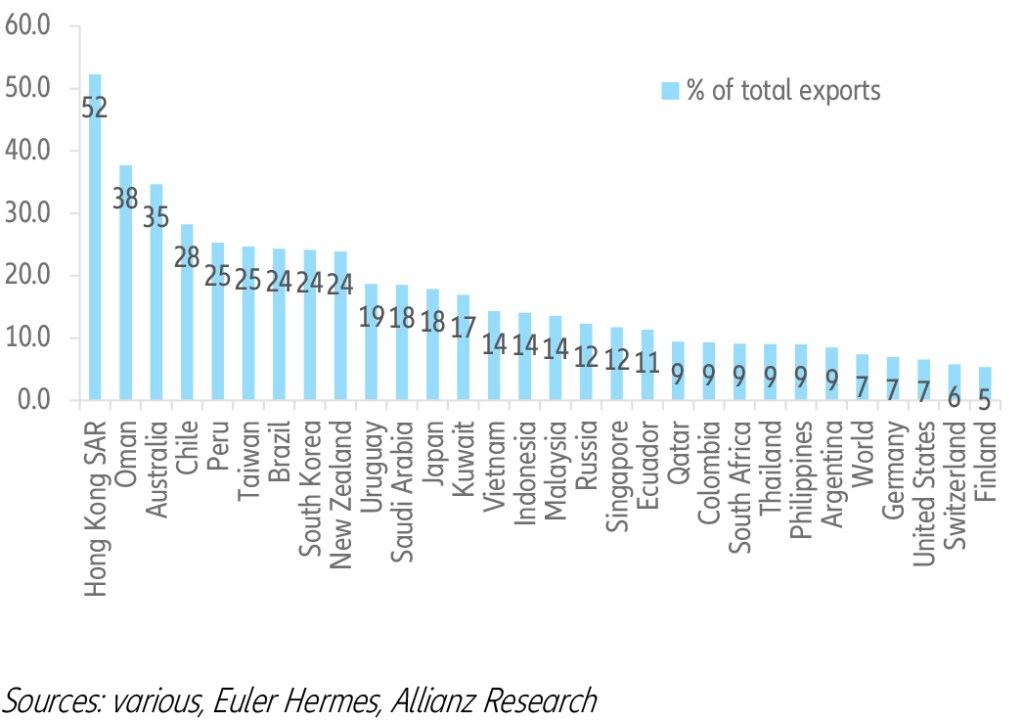 We find that Chile, Hong Kong, Peru, Australia and South Africa could be most at risk as exports to China in the construction and metals sectors account for more than 2% of their GDPs (see Exhibit 2). Conversely, exporters of energy and more precisely thermal coal (particularly in Indonesia, Malaysia and Australia in Asia-Pacific) are likely to see rising demand in the context of the ongoing energy crisis in China.

Exhibit 2: Exports to China in the construction and metals sectors, as % of GDP (2021E) 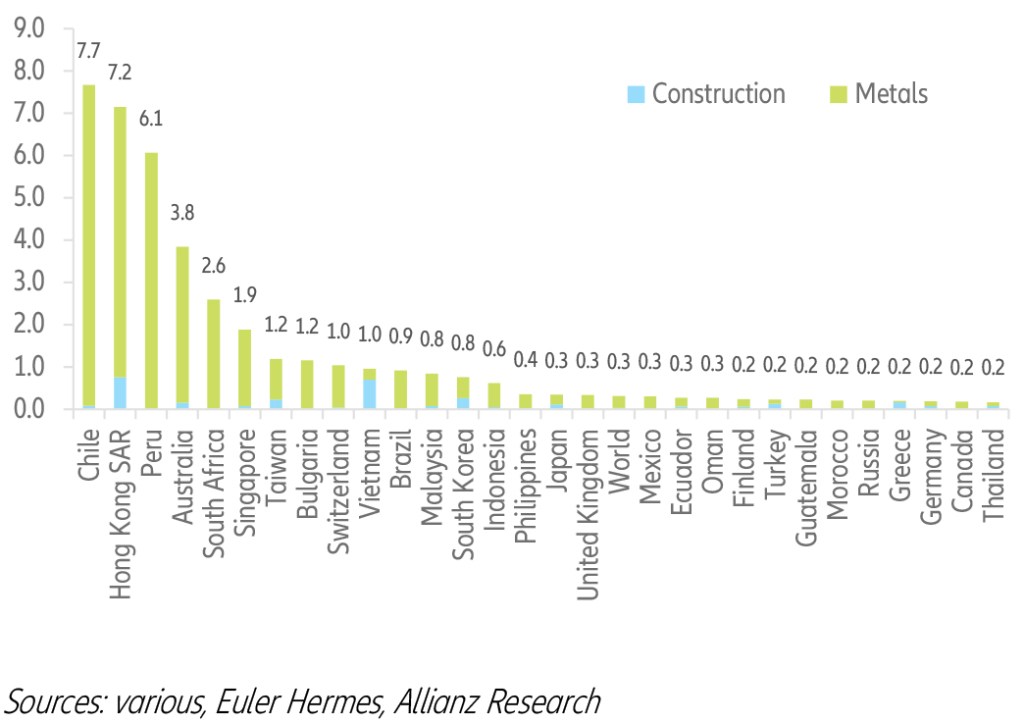 Beyond the short- to medium-term, countries dependent on Chinese demand will need to deal with its adjustment to a lower growth regime (which started before COVID-19), and the ensuing risks. Indeed, our growth potential model suggests China’s GDP growth is likely to average between 3.8% and 4.9% over the coming decade (after 7.6% in the 2010s). China’s changing economic model could also alter exporters’ exposures in the long run, with those reliant on heavy industry and construction to comparatively lose out, while those related to consumption and high technology goods could benefit.

What about financial markets?

Exhibit 3: China economic activity vs US and Europe equity performance 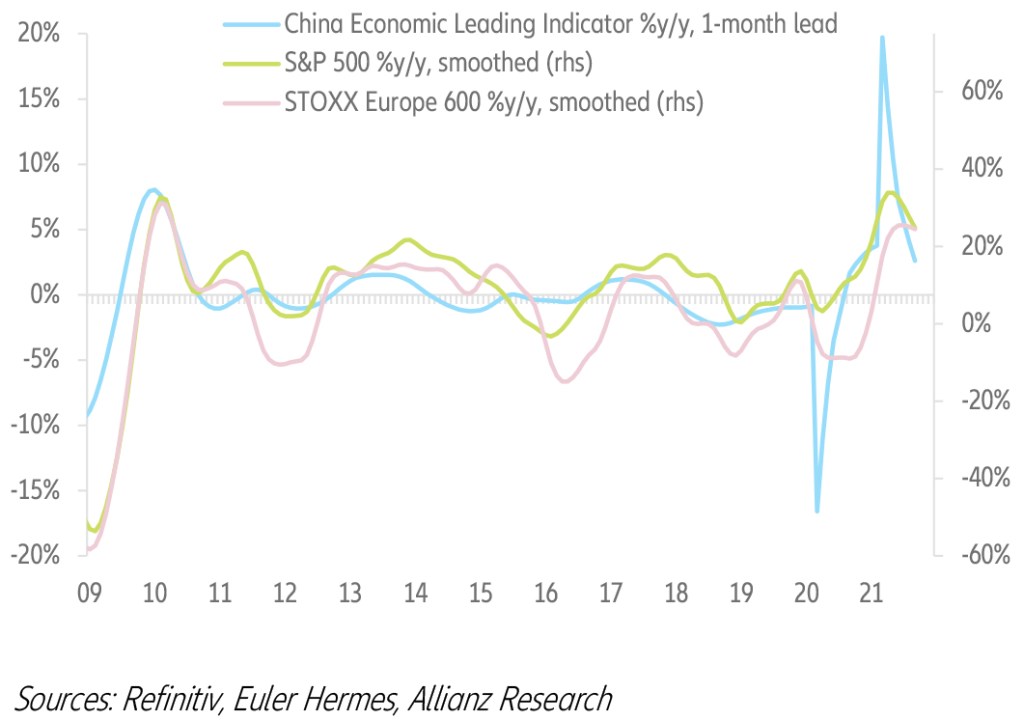 Apart from sentiment contagion (which we analyse later in this section), this relationship isn’t surprising when considering for example equity indices, where constituent companies derive a share of their revenues directly from sales in China. More precisely, in 2020, 75 companies in the S&P 500 index (representing 20% of total market capitalisation) and 100 companies in the STOXX Europe 60 index (representing 30% of total market capitalisation) reported sales in China (see Exhibit 4). Among these companies, China represented 15% of total revenues in the US and 12% in Europe. Beyond Asia-Pacific and emerging markets, a Chinese economic slowdown could thus weigh on capital markets in the US and Europe, which could in turn impact households and private consumption through a negative wealth effect. Indeed, we find that securities amount to 25% of households’ financial assets in Germany, 28% in France, around 40% in Italy and Spain, and as much as 55% in the US (primarily equities). 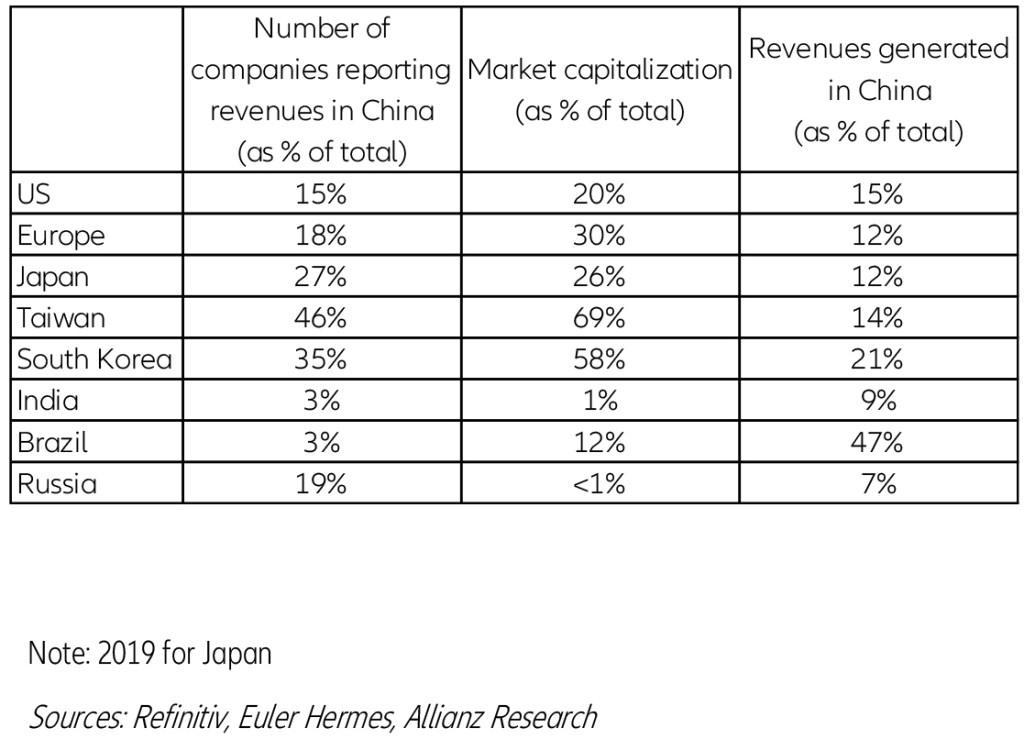 Could stress episodes in Chinese capital markets spill over to the rest of the world?

Chinese offshore corporate bonds are more at risk, while sentiment contagion to other markets is more likely for equities than corporate credit. In both asset classes, however, a spillover is more likely in the event of significant negative performance in China. China’s corporate bond market has been under pressure over the past few months and we expect further defaults among risky real estate developers in the short-term, especially on offshore bonds (that is, denominated in foreign currencies). Problems are likely to remain contained to the real estate high-yield space (see Exhibit 5) and valuations of risky real estate developers. 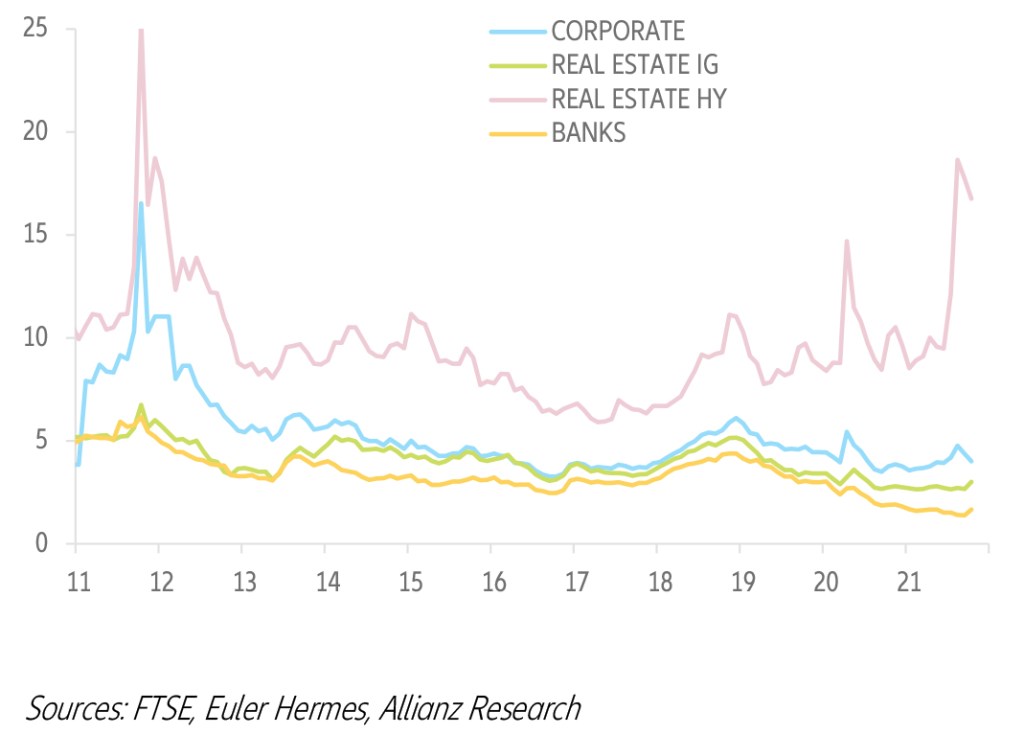 The Chinese real estate sector overall has a weight of just c.2% in the MSCI EM and JPM CEMBI indices. To analyse the possible spillover effects of Chinese markets to other financial markets, we look at the bivariate cumulative distribution function (hereinafter “copula”) of Chinese assets performance with their counterparts from different geographies. This kind of analysis allows us to identify whether two given variables (in this case monthly log returns) behave similarly at different points of the distribution.

When applying the copula analysis to Chinese high-yield bonds and other bonds from different geographies, we find the highest co-movements at the left tail (that is, in situations of large negative performance) with corporates in the US, the Eurozone and emerging markets. The covariance rates are positive but even for the aforementioned regions, the synchronisation does not appear very strong. 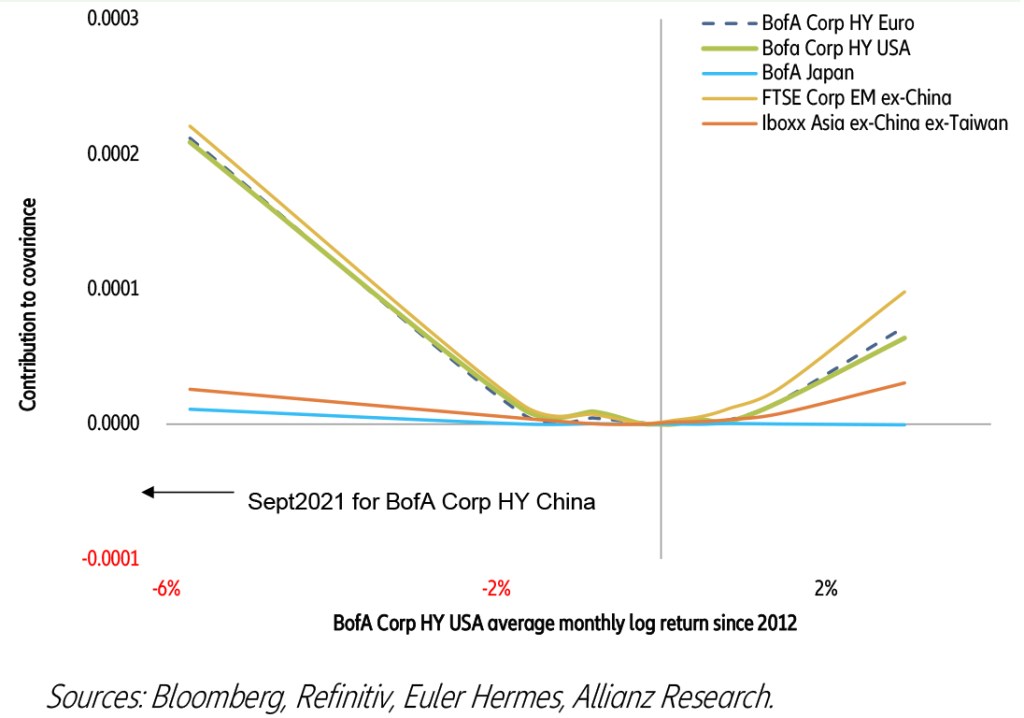 After applying the same analysis to the equities markets, the picture varies within certain geographies. Conversely to corporate bonds, at the left tail of the distribution, co-movements in equities with the rest of Asia are more significant than with other regions. But again, across all geographies, all the covariances are positive and the contributions are bigger in the left tail. When comparing with corporate credit, the co-movements in equities are greater (taking China as the pivoting point), which indicates that the markets for equities are more interconnected. That being said, our analysis also shows that even a month with up to -6% returns in the MSCI China would not necessarily come along with a similar negative performance in other markets. 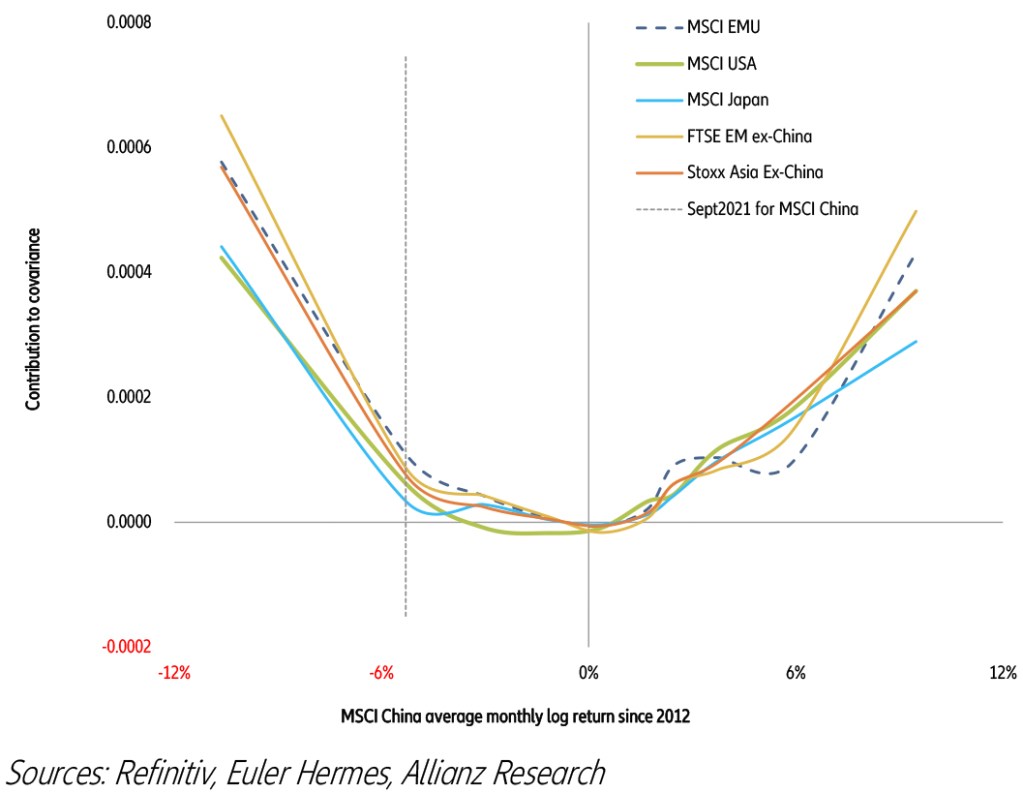 However, the copula has some limitations when it comes to detecting which assets lead and which follow (if such relationships exist). We address this issue by building a contagion analysis next, where we explore the relationship of Chinese capital markets with other markets in an event of significant stress or crash (not our central scenario).

In a scenario where things go wrong in China, financial spillovers on the rest of the world would be more significant and far-reaching, probably beyond Asia and emerging markets. Having established the existence of a relationship, we now carry out a TYDL contagion analysis, as in Marais & Bates (2006), allowing us to identify in which way the cross-geography correlations usually go (that is, whether A precedes B, or B precedes A). Additionally, we have split this analysis into three different periods: (1) September 2012 to June 2015, (2) June 2015 to June 2016 (covering the Chinese equities crash) and (3) after 2018. This separation allows us to analyse not only the direction of the movements, but also how it changes over time.

Corporate bond markets: When looking at the direction of spillover effects (Exhibit 8) in this space, we find that before 2015, Chinese markets were influenced by the Eurozone, US and other emerging markets while having a very limited impact on the US and Asia.

During the 2015 crash, spillovers from Chinese credit were directed towards the emerging markets credit space and the Eurozone and US markets were less impactful on China. In other words, Chinese credit bonds falling by -1% in 2015 drove down emerging markets credit by -11 bps – all other things being equal. However, we do not believe this episode is a fully relevant example of potential spillovers in the event of a future crisis. Since 2018, Chinese credit has become more important and intertwined with developed markets (Eurozone, US, Japan). In our view, a crisis in China could now have more damaging consequences and potentially reach well beyond the emerging markets space.

Equity markets: A similar contagion analysis in this space yields similar conclusions. The 2015 crash in China led to a regional story. Our analysis finds that a -10% drop in Chinese equities would have driven Japanese and Asian equities down by -2.5% and -1.9%, respectively (see Exhibit 9).

Nevertheless, the role of Chinese equities in global markets has changed quite a bit since 2018. Indeed, whereas before 2015 China had a limited impact on other markets (mostly spillovers towards Japan), since 2018 it has been less influenced by other markets (“received” elasticities are down) and most importantly, Chinese equities now have a sizeable impact on US markets – which set the tone for global equities. This is consistent with the increasing liberalisation of Chinese capital markets, with the foreign ownership of Chinese equities and bonds rising 2.5x between the beginning of 2016 and beginning of 2018 (and around 6x by the beginning of 2021). As such, our analysis leads us to believe that a crash in Chinese financial markets today could result in a broader and stronger fallout for global markets. 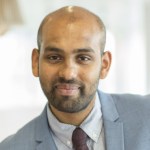 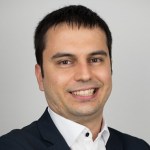