While the Asia-Pacific region has seen price rises, inflation is expected to drop back as supply-chain issues are gradually resolved
26.10.2021
Priyanka KishoreHead of India and South East Asia, Macro and Investor Services at Oxford Economics

The Asia-Pacific region’s inflation troubles are not as pronounced as in the US, Europe and Latin America. Photo by Shutterstock.

Inflation has refused to take a backseat even as more virulent COVID waves have taken a toll on recovery and pushed growth forecasts lower. Thanks to the massive economic stimulus, especially in the advanced economies, global demand remains resilient.

At the same time, prolonged supply-chain disruptions have exacerbated goods shortages. The result – a raging debate over whether inflationary pressures are transitory or permanent. Now with energy prices surging, the two camps are more divided than ever.

We have been of the view that the world is not about to enter a high inflation regime and still expect inflation to drop back as supply-chain issues are gradually resolved. While we do forecast high inflation will squeeze real incomes and impede global recovery in 2021 and 2022, this is not true to the same degree for every region. We maintain that the Asia-Pacific region’s inflation troubles are not as pronounced as in the US, Europe and Latin America. 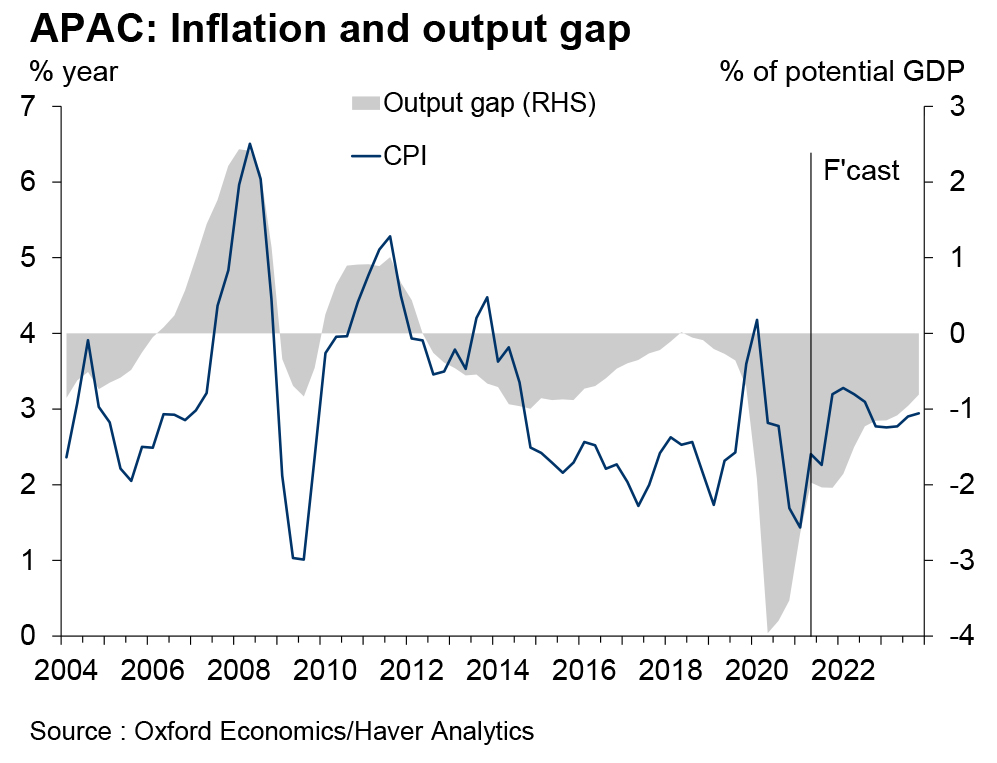 Global price pressures have filtered through

Inflation has trended up in Asia since the start of the year (Exhibit 2). Sure, core inflation has picked up sequentially as recovery has gained traction in some economies, especially in North Asia. But in line with the global trend, prices have surged in categories such as food and durable items, either due to pent-up demand or supply-chain disruptions – or most likely, a combination of the two.

Exhibit 2: CPI has not been immune to global price rises but the impact on PPI is more 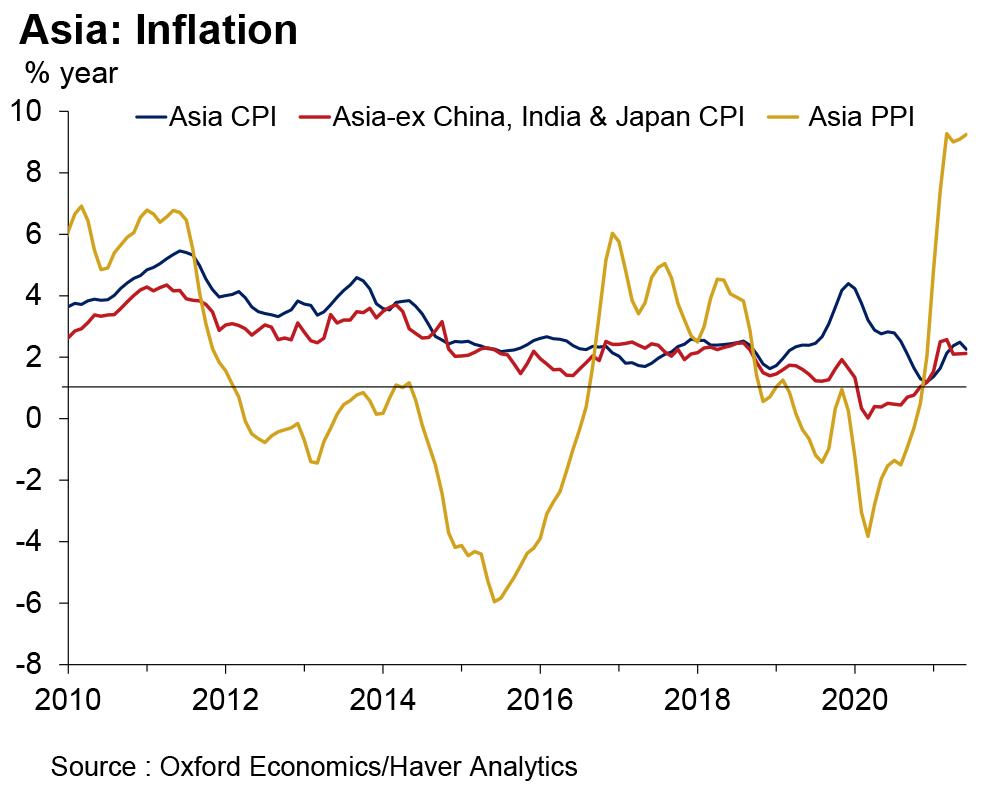 In particular, CPI inflation has held above 2%, typically the central bank target for advanced economies, in Australia, Taiwan, South Korea and Singapore for several months now. In emerging Asia, inflationary pressures have been elevated in India, the Philippines and Malaysia.

Still, the situation seems under control. At an aggregate level, inflation is substantially below the levels seen in the first half of 2020, due to a correction in China and India. The 2021 uptrend peaked in May and continued to moderate in September, even as fuel CPI rose strongly. Of the eight large Asian economies that have an inflation target, only the Philippines and South Korea’s inflation readings are above the target range currently.

But domestic demand is subdued

To a large extent, the inflation trajectory reflects the region’s weak growth performance, which has deterred businesses from passing on higher costs to consumers and kept core prices in check. On average, Asia-Pacific’s GDP growth forecasts for 2021 have slipped over the past six months (Exhibit 3). 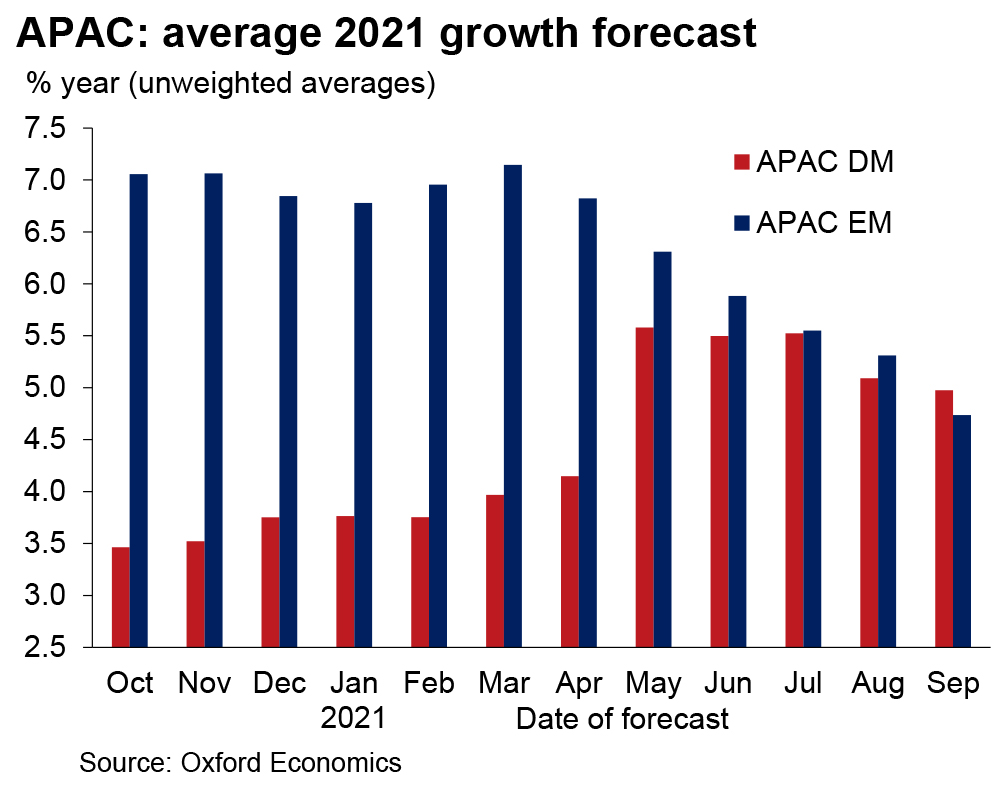 The downgrade has been led by emerging Asian economies, where a combination of Delta outbreaks, slow vaccination progress, and limited fiscal support have delayed recoveries significantly and kept output gaps wide (Exhibit 4).

Exhibit 4: APAC output gaps will remain negative in 2022 and sizeable for some 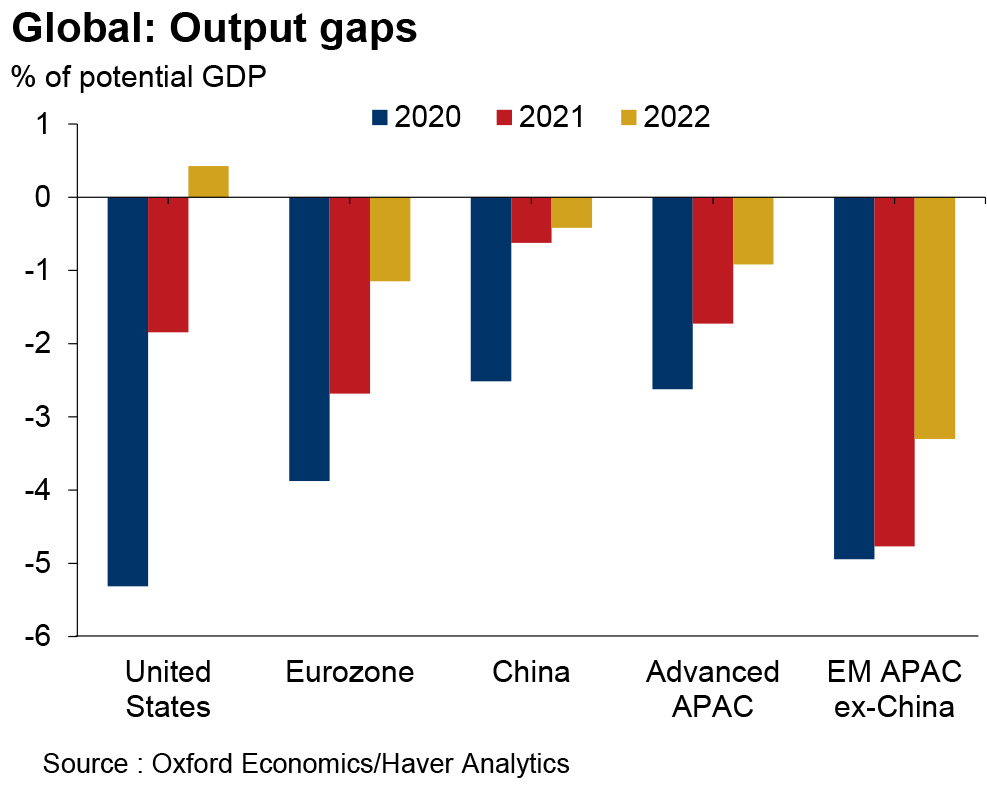 In contrast, the US and other advanced economies have experienced an upgrade to their forecasts. While these estimations have come under pressures in recent months due to pandemic-related developments, they still remain above the projections at the start of the year. This is true for developed Asian economies, too. However, in the few Asian economies where core prices have risen too fast, such as South Korea and Singapore, monetary policy has acted swiftly to dampen upside pressures.

Other technical factors also shield Asian inflation from global developments. Importantly, the composition of Asian CPI baskets has gradually shifted towards services and non-tradeables over the years. While services inflation is also recovering from its lows, it hasn’t accelerated like goods inflation. Hence, the direct impact of raw material shortages and rising input prices has been felt more on the producer price index, which has remained above 9% since May and is rising again.

Notably, fuel has just 9% average weight in Asia’s CPI, with the share being highest for Singapore at 15.23% and lowest for Hong Kong at 2.82% (Exhibit 5). Not only does this weighting limit the direct impact of rising energy prices on consumer inflation, but it also means that declining inflation in other categories can counter the impact of fuel inflation significantly. For example, falling food prices have more than offset the impact of rising fuel prices in China and India. Though food prices have also been rising globally, they are largely determined domestically in Asia, and, barring the Philippines, are not uncomfortably high. 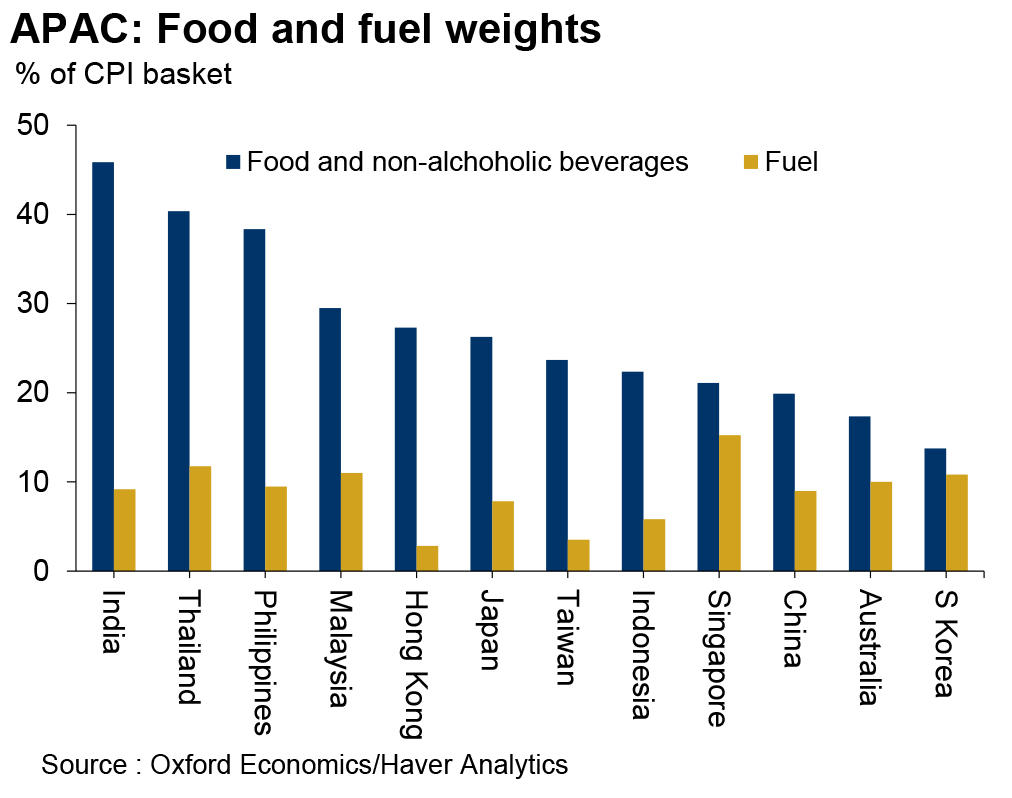 Finally, administrative measures continue to play an important role in containing inflationary pressures. Several Asian economies, including Indonesia, the Philippines, Malaysia, Thailand and Hong Kong, have leaned on subsidies to limit the pass-through to domestic fuel and electricity prices. The Philippines has also lowered tariffs on some food items such as pork and rice to contain risks of runaway inflation.

Of course, price controls involving the provision of subsidies and lower taxes carry fiscal costs. But we do not see the additional expenditure driving deficits to worrying levels. While we have revised up our fourth quarter fiscal deficit forecasts for Indonesia and Malaysia, we expect fiscal consolidation to resume the first quarter of 2022 onwards as energy prices recede. Also, higher oil and gas prices will boost energy-related government revenues and partly offset the impact of higher subsidies on the deficit in these countries.

Some economies also have the option of resorting to off-balance sheet solutions. Thailand’s oil fund should help mitigate the impact of higher global energy prices on domestic fuel prices, while limiting the impact on reported deficit figures.

Inflation in the near term is likely to trend up, but the fourth quarter should mark peak

This does not mean that we expect Asia to completely escape global price pressures. But the impact is likely to be less dramatic than in other parts of the world, where demand dynamics are more robust. In contrast to the 0.5ppt upward revision in our fourth quarter global CPI forecast in October, we have raised our Asia-Pacific inflation forecast by 0.2 ppt, to 3.2% y/y. The higher inflation projection is primarily driven by a pickup in advanced Asian economies. In emerging Asia, there is a significant revision only to Thailand’s CPI due to an end to its electricity subsidy.

We expect the fourth quarter to mark the peak of inflation in Asia, albeit the downtrend will be slow, and we forecast inflation to remain above 3% through most of 2022 (Exhibit 6). This is mostly because supply bottlenecks will take time to resolve, and some businesses may come under greater pressure to partly pass on the higher costs. But cyclical inflation drivers are unlikely to become unhinged. 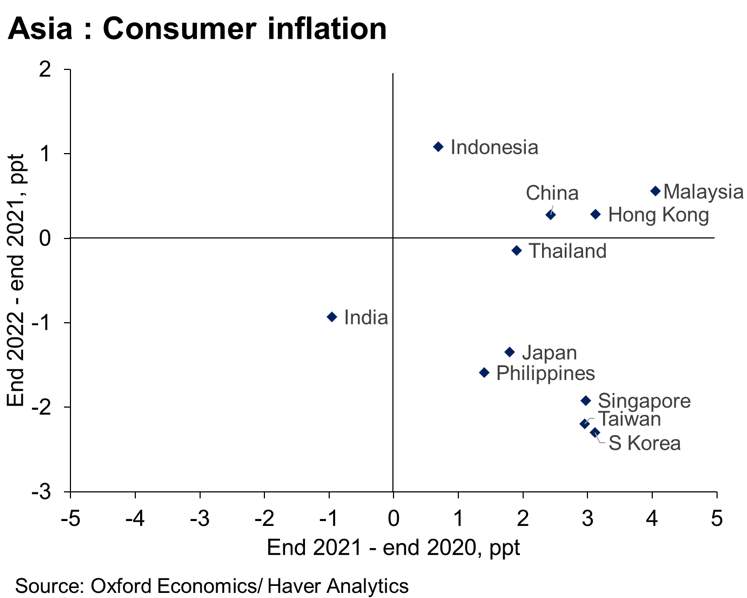 Exhibit 7: Growth outlook has moderated on the spread of Delta and supply disruptions 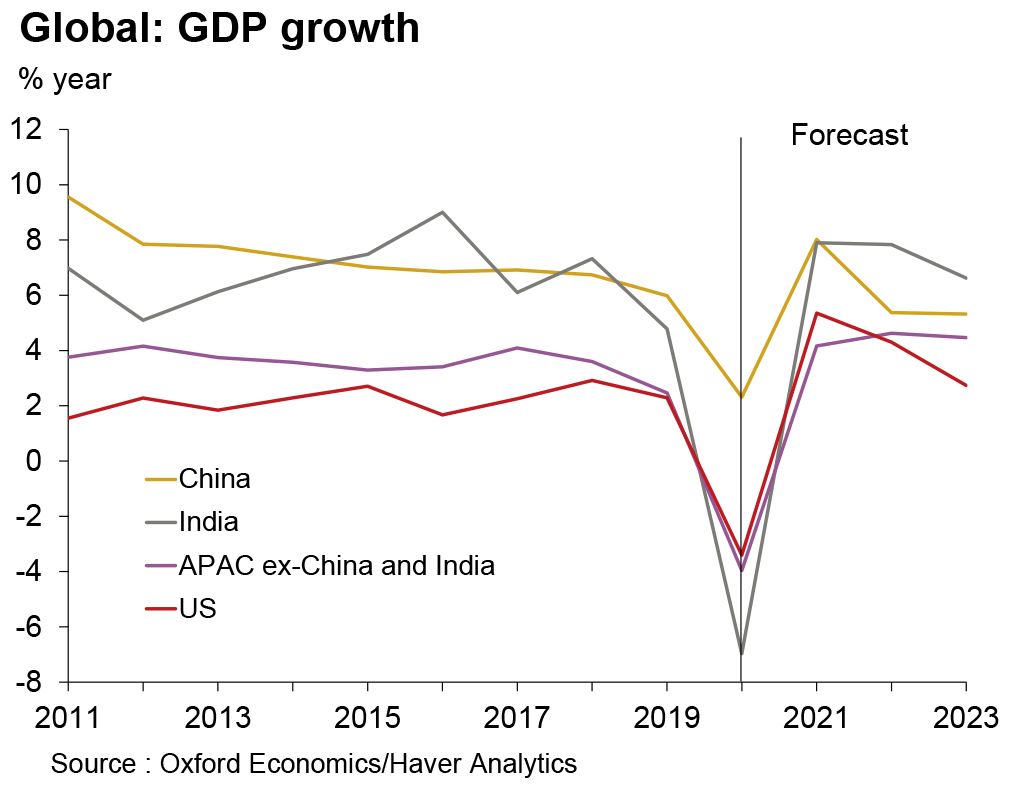 There is also little sign of a wage-inflation loop forming amid abundant labour market slack. This should allow central banks to look through temporary prices disruptions in economies where there is little evidence of second-round inflation effects.