Vietnam’s role as a global manufacturing hub will fuel growth

Vietnam has been a beneficiary of the US-China trade war. Although FDI dipped in 2020, it did better than global FDI flows. Photo by D Mz from Pixabay.

Vietnam was one of only a few economies globally to grow in 2020. A strong recovery in export-orientated manufacturing fuelled a 2.9% gross domestic product (GDP) increase. Indeed, goods exports in USD terms were up 6.9% in 2020, which while a moderation from the 8.5% growth witnessed in 2019, was still a significant achievement considering that world trade in USD terms fell 7.8% in 2020.

Vietnam also further strengthened its world market share of goods exports in 2020 to 1.6%, up from 1.4% in 2019 and 0.5% in 2010, as a substantial rise in foreign direct investment (FDI) has increased the country’s role in global manufacturing supply chains.

Part of Vietnam’s recent export outperformance also reflects some temporary factors. In particular, its successful containment of the coronavirus enabled the manufacturing sector to normalise faster than it did in most other countries in the region (Exhibit 1). As such, Vietnam was able to take full advantage of the work-from-home-related global boom in demand for computers, other electronics and furniture.

Exhibit 1: Some sectors are already back above pre-coronavirus levels 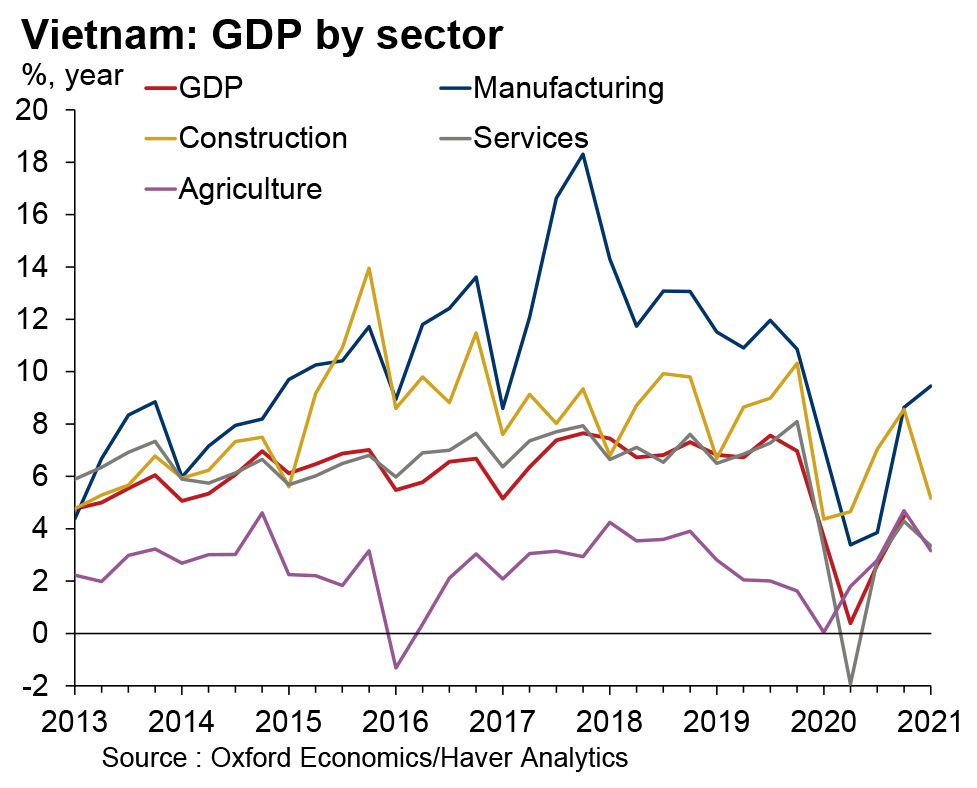 These tailwinds will likely fade this year as an easing in restrictions will allow production in other countries to normalise. We also think last year’s demand for computers and furniture is unlikely to be repeated. That said, we believe Vietnam’s exports will continue to outperform most others in the region this year and beyond (Exhibit 2).

Exhibit 2: Vietnam has outperformed most countries in the region 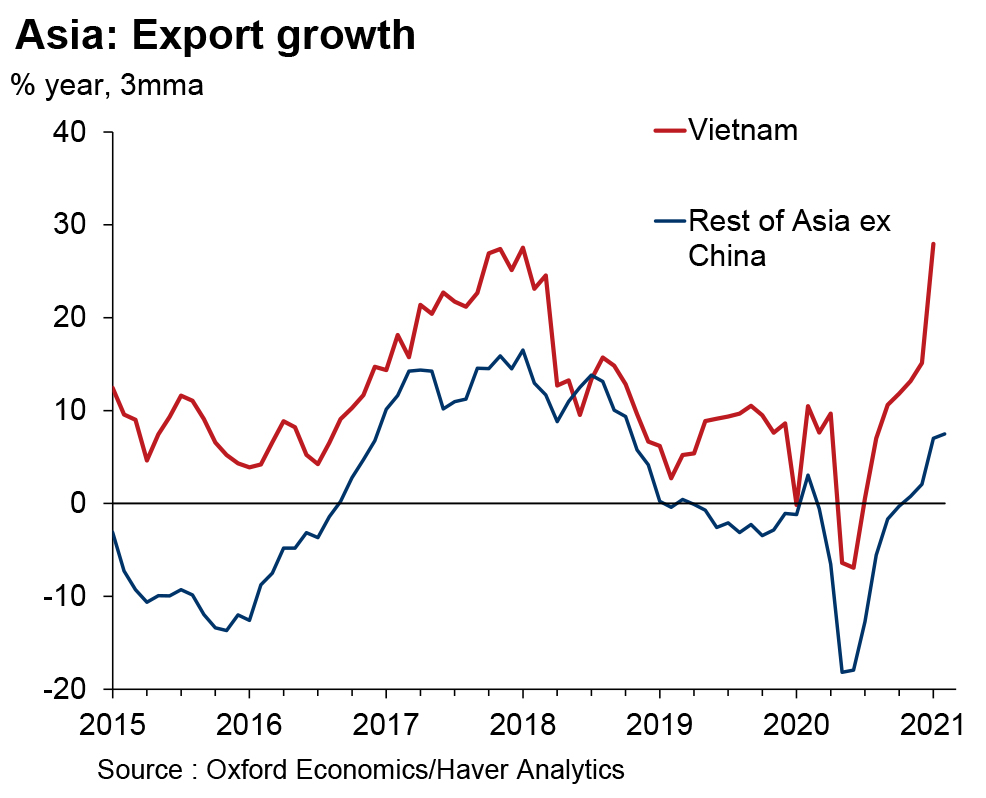 Bounce in world trade and electronics

We expect Vietnam’s export manufacturing sector will be buoyed by a rebound in world trade this year. Indeed, as coronavirus-related restrictions are rolled back and vaccines become more widely available, we forecast world trade in real terms will surge nearly 10% this year. This is in part because of the generous $1.9 trillion US stimulus package, which will also likely bolster US demand for Vietnamese exports.

Moreover, our industry colleagues expect the electronics sector to grow by 6.4% in 2021, up from 2.8% last year, supported by telecommunications equipment relating to upgrades to 5G infrastructure.

We believe Vietnam will benefit from this rise in global demand for electronics because its participation in global supply chains has increased significantly over the past five years following a surge in FDI (Exhibit 3). 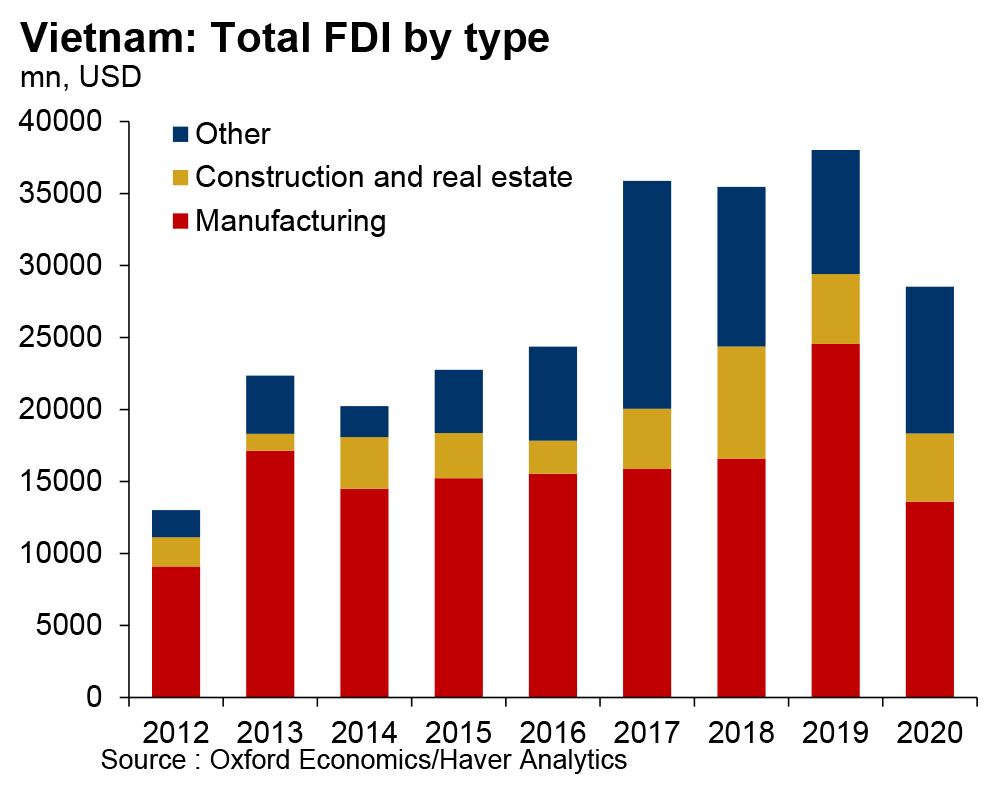 FDI into Vietnam did fall 25% in 2020, but this compared favourably to a 42% collapse in global FDI flows caused by the pandemic. However, this decline in FDI inflows was preceded by very strong growth. In 2019, Vietnam accounted for 1% (or $16.1 billion) worth of global FDI inflows, more than Malaysia and Thailand combined. FDI to the manufacturing sector also rose 11% annually over 2014-2019.

The rise in US-China trade tensions since 2018 and the imposition of large import tariffs on China by the US has further enhanced Vietnam’s attractiveness as a destination for FDI, with a notable increase in inflows from China and a surge in US consumer demand.

US imports shifting away from China and a faster normalisation of production post-lockdowns saw Vietnam’s exports to the US grow nearly 26% in 2020 and its share of US imports rise to 2.7%, up from 1.9% in 2017. In comparison, despite a strong increase in exports to the US last year, China’s share of US imports was still around 2.6 percentage points lower than before tariffs were imposed in 2018 (Exhibit 4).

Exhibit 4: Vietnam has benefitted from a drop in exports from China to the US since 2018 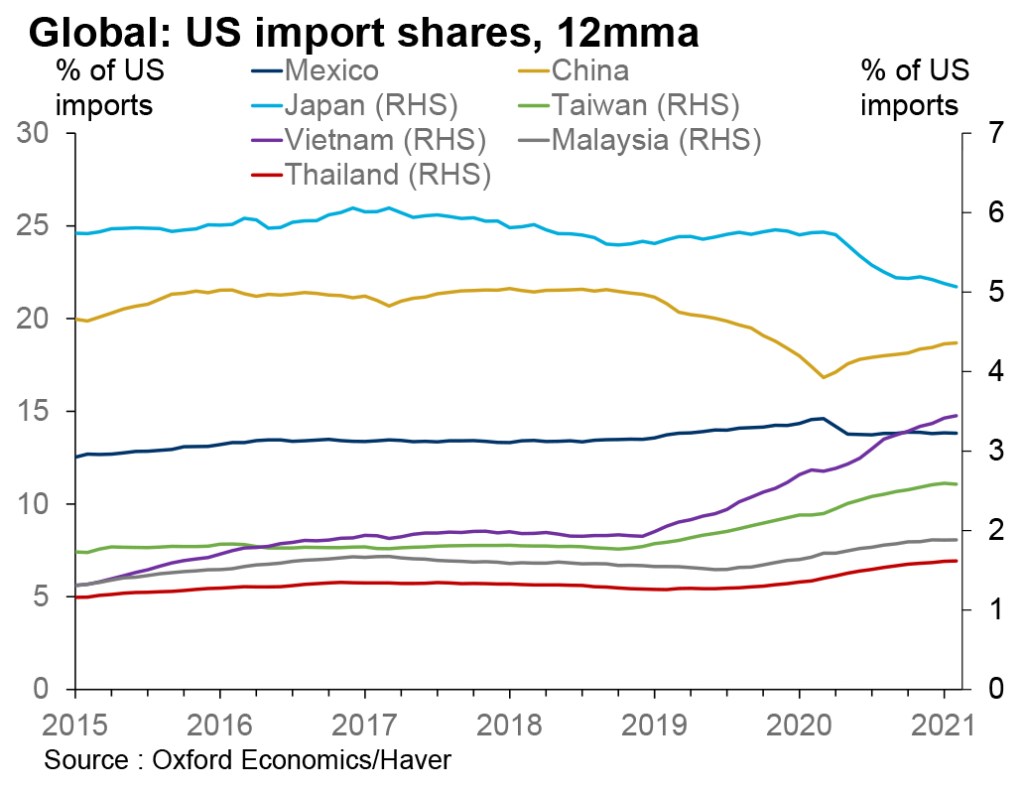 China’s share of computer and electronics-related exports to the US has been hit particularly hard since the start of the trade war—falling around 13 percentage points—with Vietnam experiencing the largest gain in market share (up 4 percentage points), followed by Taiwan. But that said, China continued to supply more than two-thirds of US imports of these goods.

Interestingly, the fall in China’s exports of final computer and electronic goods to the US did not lead to a sharp decline in China’s demand for electronic intermediate goods. Indeed, China’s imports of machinery and goods from Vietnam, which includes intermediate goods, rose 31% annually on average between 2018 and 2020 (Exhibit 5). The ongoing demand for these goods likely reflects some Chinese firms shifting production and assembly to Vietnam to save labour costs and avoid higher US tariffs.

Exhibit 5: A shift in China’s production has contributed to a rise in Vietnam’s share 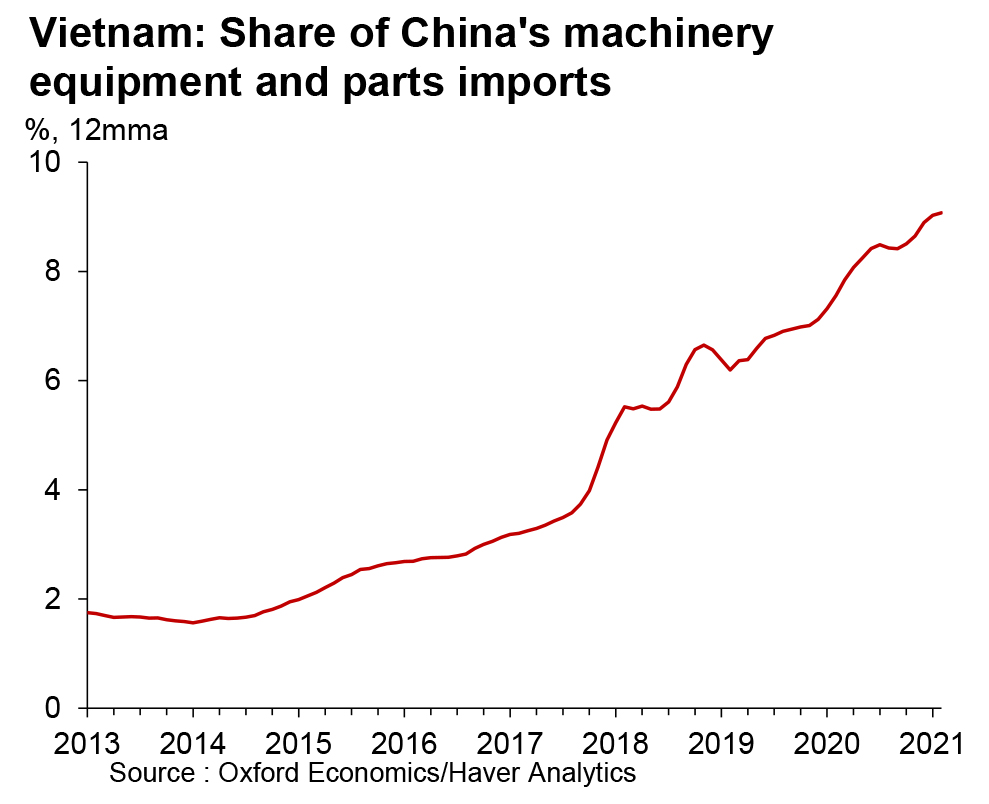 Vietnam is an attractive destination for FDI

We expect China to continue its efforts to move up the manufacturing value-added chain and expand its domestic consumer market. We also think Asia-oriented supply chains will continue to adjust in coming years and believe Vietnam is well placed to benefit from these trends.

Indeed, we expect Vietnam will remain an attractive destination for global FDI inflows in the medium term, given its attractive labour dynamics, close proximity to China, and favourable trade and FDI policies. As such, we estimate that Vietnam’s share of global electrical exports will continue to rise, to account for around 4% of global electronics exports by 2025 (Exhibit 6).

Exhibit 6: Vietnam will increase its share of global electronics exports to nearly 4% by 2025 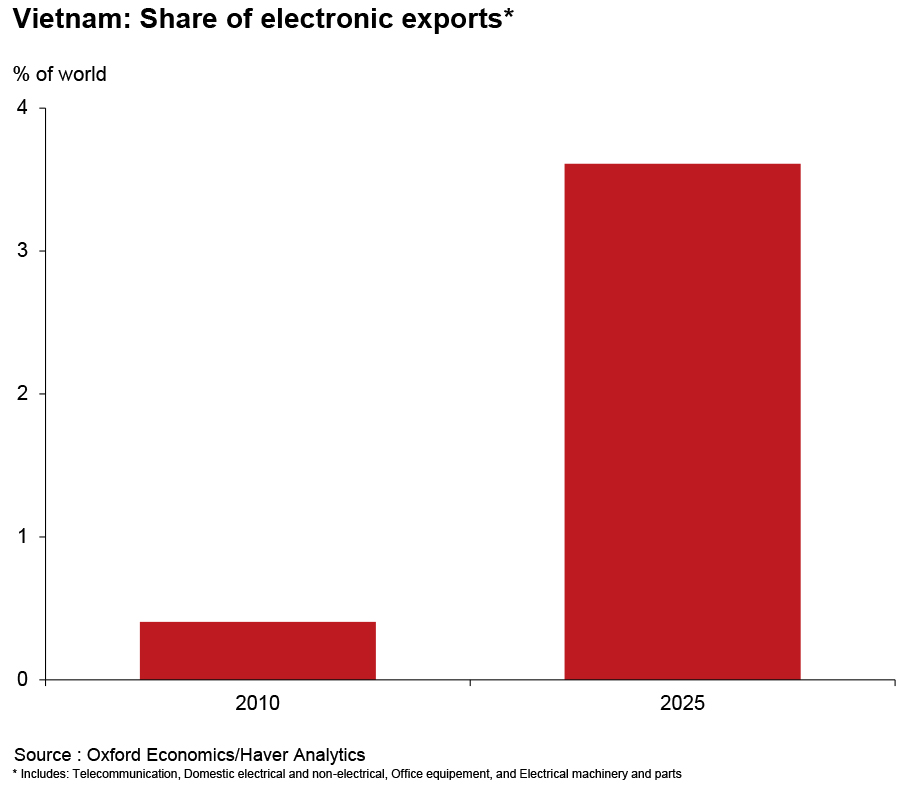 This market share could be even higher, but we believe the emergence of supply bottlenecks around key ports serving industrial clusters will limit the upward trend in Vietnam’s global electronics exports share, at least over the next few years. Projects to ease this problem will require foreign investors. Even if funding is secured, these infrastructure upgrades will take time.

Higher US tariffs are still a risk…

As previously highlighted, one dark cloud on the horizon is the prospect of punitive tariffs on Vietnamese exports to the US. The US Treasury designated Vietnam a “currency manipulator” in its latest US Treasury Semi-Annual Currency report, citing the large bilateral deficit (Exhibit 7).

It also noted that Vietnamese authorities have undertaken large-scale and protracted FX market intervention, which saw its foreign reserves increase sharply and the “undervaluation of the dong on a real, trade-weighted basis”.

Exhibit 7: The US bilateral trade deficit with Vietnam widened to $69.8 billion in 2020 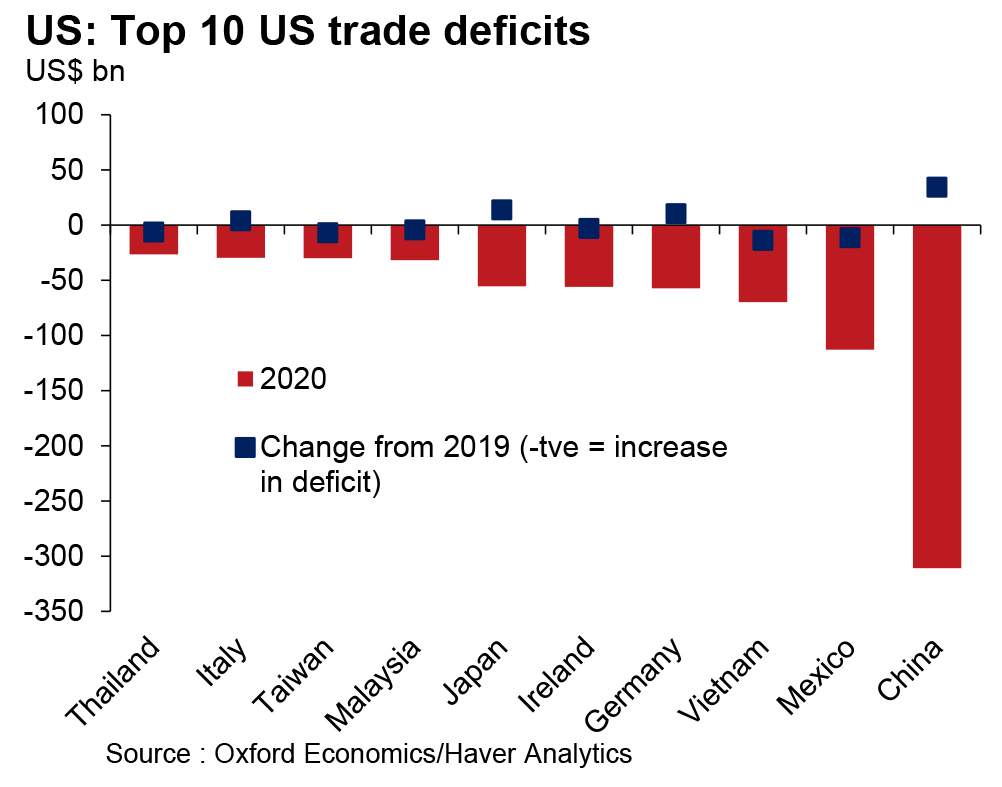 …but US action is unlikely for now

However, while some Vietnamese products, such as timber, may face higher tariffs, we do not expect any widespread action from the US. Some evidence shows that the US has little appetite to further disrupt its companies’ supply chains.

In fact, the Office of US Trade Representative recently concluded its own investigation into Vietnam’s exchange rate policy. Although it found that the dong was undervalued, it indicated it would not take any specific actions at this time, suggesting the US doesn’t want to impede the supply chains of domestic companies.

Vietnam is also an important US strategic ally in countering China’s influence in global trade and the region, which it is likely to consider before undertaking any significant action against Vietnamese exports.

However, we expect Vietnam will undertake a conciliatory approach given the US accounts for 25% of its exports. Vietnam has already shown a willingness to buy more American airplanes and liquid natural gas (LNG), and has increased surveillance on Chinese goods crossing the border and being marked as “Made in Vietnam”.

Moreover, the State Bank of Vietnam has reduced the frequency of its FX intervention, with the dong likely to track the movement of its peers more closely.

The impact on growth if tariffs are raised

Using our Global Economic Model, we estimate that in the unlikely case that the US were to raise tariffs by 10% on four of Vietnam’s top export categories to the US—textiles, computers, telecommunication and furniture—valued at $40.3 billion (or 52% of its total exports to the US), Vietnam’s GDP growth would slow to around 6.4% annually in 2021-2022 versus 7.2% in our baseline.

But as pointed out above, we do not expect tariffs to be increased, at least for now, given various considerations.