2023 is likely to be a difficult year for most Asian economies given the possibility of a global recession and the lack of policy space to counter it. A combination of higher interest rates stemming from high inflation, limited fiscal space and weak currencies will compound issues
22.11.2022
Arup RahaHead of Asian Economics at Oxford Economics
Alex HolmesSenior Economist at Oxford Economics

Foreign visitors at Suvarnabhumi airport after Thailand reopened for tourism after COVID. Photo by Shutterstock.

Asian economies are no strangers to economic setbacks. Over the past 25 years, there have been three significant shocks—the Asian Financial Crisis (AFC) of 1997-1998, the bursting of the Dotcom Bubble in 2001, and the Global Financial Crisis (GFC) in 2008—the region has dealt with. There was also a mini-devaluation of the Chinese renminbi (RMB) in 2015.

The region’s economies bounced back smartly each time. Even as structural scars remained, growth returned quite quickly and was sustained.

This time is likely to be different, however.

This is owing to headwinds that include a global growth slowdown, China posting its lowest growth rate since reforms began over 40 years ago, the Fed raising rates and effectively forcing Asian central banks to follow, and higher oil prices.

This combination of headwinds is unprecedented for Asia. During previous crises, robust Chinese growth has been supportive (Exhibit 1) and the Fed has taken an expansionary stance. Oil prices have also never risen to such a dramatic degree.

Exhibit 1: China won’t be the counterbalance to advanced economies it once was 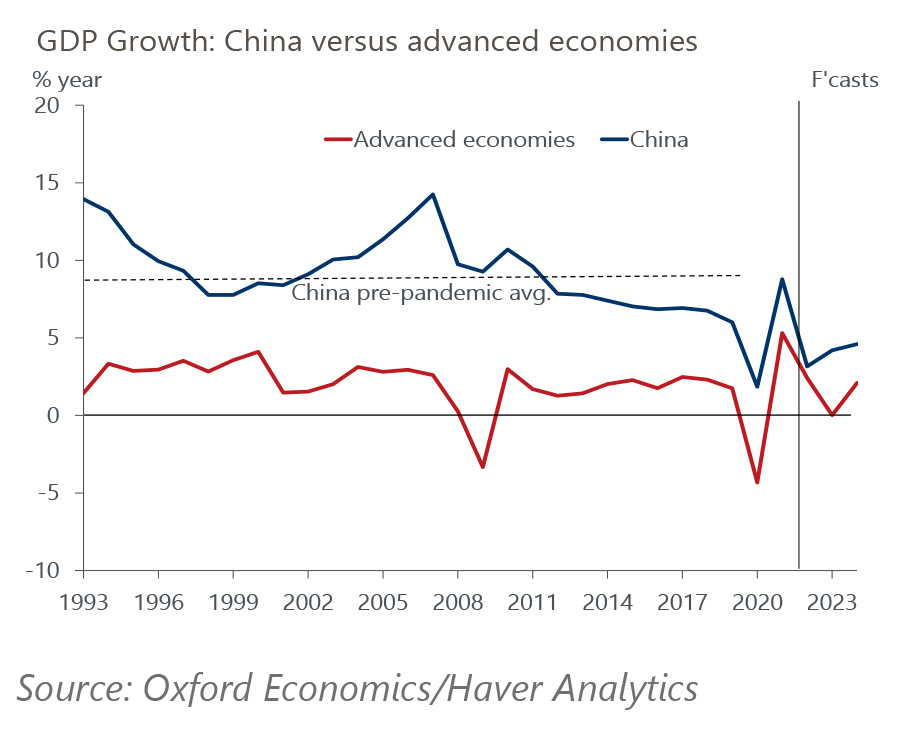 Other challenges Asian economies face include the change in the nature of demand abroad from goods to services, the need for Asian households to rebuild their balance sheets, and the state of consumer confidence. Separately, bottlenecks remain in various sectors, tourism infrastructure is depleted, and labour markets have been dislocated as there has been significant reverse migration across borders and from urban to rural areas.

It is a long list of headwinds, both structural and cyclical.

The outlook for external demand has worsened markedly in the past six months as advanced economies have been hit by rising inflation and tightening financial conditions. Meanwhile, global growth prospects have continued to deteriorate.

Europe is facing a chilly winter as it deals with an energy crisis. Meanwhile, the Fed has made clear that it will continue hiking rates until it brings inflation under control, even at the expense of a hard landing for the economy.

For Asia, it is not just softening demand for exports that presents a large headwind. A shift in demand is likely too. Asian exporters benefited hugely during the pandemic as consumers were unable to spend on services and instead spent more on goods. But with the pandemic fading, a reversal of that trend is likely as demand shifts back towards services. This shift is likely to be acute for electronics exporters, with the semiconductor cycle already turning.

These headwinds to Asian exporters are reflected in our downbeat 2023 forecasts, in which we see exports contracting in most countries (Exhibit 2).

Exhibit 2: Downturn in the export sector ahead 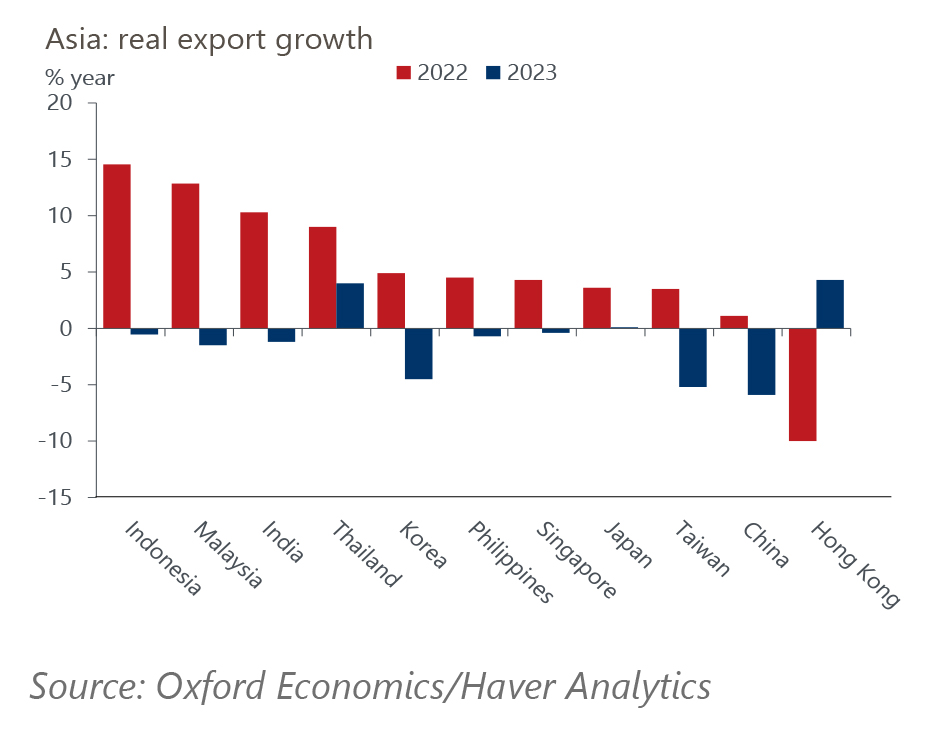 Consumption demand is likely to be hampered too

Private consumption usually moves in line with rises and falls in income growth. However, during periods of declining income—and especially so in the poorer nations—consumption does not fall as much as income because a large part of it is on necessities, such as food and clothing. Savings are often run down to fill in the gap.

As economies recover, savings need to be rebuilt, given a lack of social safety nets. This essentially puts a limit on consumption demand.

This is likely to differ by country depending on available support subsystems. In the relatively richer countries, such as Korea and Singapore, where government support was adequate, private savings were not run down at an aggregate level while the savings rate declined in relatively poorer countries such as Thailand. In Thailand, the transfers were consumed and there was still a need to dissave. The private savings rate in Korea remained pretty much the same, while in Singapore it went up.

The difference in the coming years will be seen in the sector where savings need to be rebuilt. Private savings in Thailand are likely to rise, as after previous crises. We expect the ratio of consumption to GDP to fall. In Singapore, it will be public savings that will rise. Indeed, Singapore has already announced plans to raise taxes in the coming years.

Investment will take time to improve

We believe the scale of the current economic shock will cause risk aversion to be extremely high. Capacity expansion is set to be modest until firms see a sustained improvement in demand.

Additionally, the bar to invest is also higher. With firmer interest rates, the required rate of return on investment is higher than before as well as the inherent option value of delaying investment due to uncertainty.

One of the points of resilience for Asia during the pandemic was strong balance sheets at all levels. Household and corporate debt were low and fiscal accounts were largely sound. Indeed, this allowed Asian economies to have a delayed and muted reaction to increases in the Fed Funds rate.

Where fiscal accounts were not particularly strong, rate increases were much greater. For example, in the Philippines, policy rates more than doubled from 2% to 4.25%.

However, fiscal accounts took a hit due to pandemic support measures. It is possible that as the global growth downturn gets more severe, Asian countries may feel the need to loosen fiscal settings. However, the space has been depleted.

To be clear, inflation in Asia is largely being driven by the supply side, including oil prices, other commodity prices, and various bottlenecks.

Asian economies have three ways to cope with the external shock. They could raise rates and reduce demand, they could make it a fiscal issue and control domestic prices, or they could let price increases feed through into the economy.

In most cases, policymakers have used all three tools. Energy prices have been somewhat controlled and interest rates have gone up. In short, both a demand (higher rates) and a supply shock (higher oil prices) have been in play. The problem for central banks is that the two shocks require opposite policies, thus making policymaking a fine balancing act.

For now, it appears that the choice in every country has been to let energy prices rise and use monetary policy to keep inflationary expectations anchored. But that also means that currency depreciation needs to be controlled in the face of a deteriorating current account and an extremely strong US dollar.

A difficult year in prospect

We believe 2023 is likely to be a difficult year for nearly all Asian economies. Growth should slow everywhere, except perhaps China and Thailand. The slowdown will likely be driven by a recession in the global economy but also due a shift in global demand away from goods and towards services.

Besides that, China’s economy is struggling, the Fed is likely to keep raising rates, and energy prices are high. The policy space to handle these shocks is limited, and therefore much of the burden of adjustment will fall on the real economy.

* A version of this article was first published on Oxford Economics and can be downloaded here. 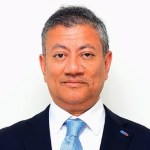 Arup Raha is the Head of Asian Economics at Oxford Economics. He leads a strong 10-member team with responsibility for the coverage of several Asian economies, including China, Japan and India. Arup started his career as an economist with the World Bank in Washington DC and then went on to build a successful career in the financial services industry. Arup has previously been the Chief Economist for Asia-Pacific for 3 global banks, namely UBS, Citi and HSBC and has also been the Head of India Equity Research for JP Morgan. 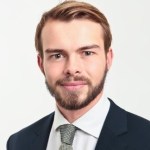 Alex Holmes is focused on the economies of South and Southeast Asia, including detailed country-level analysis as well as research into broader regional trends. Alex has several years of experience in macroeconomic research, with more than half of that time focused on Asia. Prior to Oxford Economics, he spent much of his career at Capital Economics, following stints at ICAP, Barclays Bank and the UK Government Economics Service.