We believe that emerging markets have developed new sources of vulnerability, with a combination of chronically weak growth, rising inflation and a marked deterioration in fiscal finances, and yet real policy rates remain deeply negative in many of them.

The prospect of the Fed normalising monetary policy amid China’s slowing is a dreadful combination for emerging markets, only to be made worse by the three vulnerabilities.

A growing emerging markets bank-sovereign debt nexus that raises the risk of a so-called bank-sovereign doom feedback loop – the type of loop that was at the heart of the 2009-10 European debt crisis. In addition to several low-income, frontier economies, Brazil and India appear most at risk of a doom loop.

We debunk the idea that, just because emerging markets have attracted smaller cumulative portfolio inflows since COVID-19, they are less susceptible to large capital flight. Gauged by portfolio liabilities, as opposed to cumulative portfolio inflows, we show how many emerging markets are likely more susceptible now than on the eve of the 2013 taper tantrum, once asset revaluation effects are taken into account.

During the 2013 taper tantrum they were referred to as the fragile five: Brazil, India, Indonesia, Turkey and South Africa. Bringing together all of our analyses, we now warn of the “troubled ten”: Brazil, Colombia, Chile, Peru, Hungary, Romania, Turkey, South Africa, Indonesia and the Philippines.

We believe the economic fundamentals in many emerging market countries have deteriorated over the past year and are likely to worsen further in the year ahead, heightening the risk of financial crises as global rates rise.

It is also true that some vulnerability indicators have improved since the taper tantrum in 2013. Back then, the so-called “fragile five”—Brazil, India, Indonesia, South Africa and Turkey—had large current account deficits, low forex reserves and, after the global financial crisis (GFC), had attracted a wall of hot money inflows that could leave in a flash. Eight years on and in the midst of a pandemic, current account deficits are mostly smaller (or surpluses), forex reserves have been built up and there has been a smaller cumulative build-up of portfolio inflows (there was record portfolio flight from emerging markets in March-April 2020).

A recap of our downbeat emerging market outlook

As we have previously argued, instead of an all-clear bill of health, COVID-19 has changed the sources of emerging market vulnerability. Many emerging market economies face some combination of chronically weak growth, rising inflation and a marked deterioration in fiscal finances, while still grappling with new waves of COVID-19 with limited access to vaccines (possibly exacerbated by the move to booster shots in developed economies) and overburdened health systems.

It is looking increasingly likely that emerging market countries will ultimately be the hardest hit by COVID-19.

Juxtaposed against these fragilities are emerging market central banks that, in a major departure from past global crises, loosened (rather than tightened) monetary policy—and drastically so—with real policy rates deeply negative and many starting quantitative easing for the first time. Real policy rates have been negative in emerging market economies 59% of the time since COVID-19, which is unusually long on a historical basis.

Emerging market central banks have recently started raising rates, but many are only matching the rise in inflation, resulting in still deeply negative real rates. We discussed how some emerging central banks may have overreached in the sense of not providing enough interest rate return to foreign investors to compensate for weaker economic fundamentals. In Exhibit 1, we have updated our heat-map gauge of emerging markets central bank overreach and economic fundamentals from which several countries appear exposed, notably Brazil, Colombia, Hungary, Peru, Romania, Turkey, South Africa, India and the Philippines.

Exhibit 1: Looseness of monetary policy vs sustainability of government debt and strength of economic fundamentals 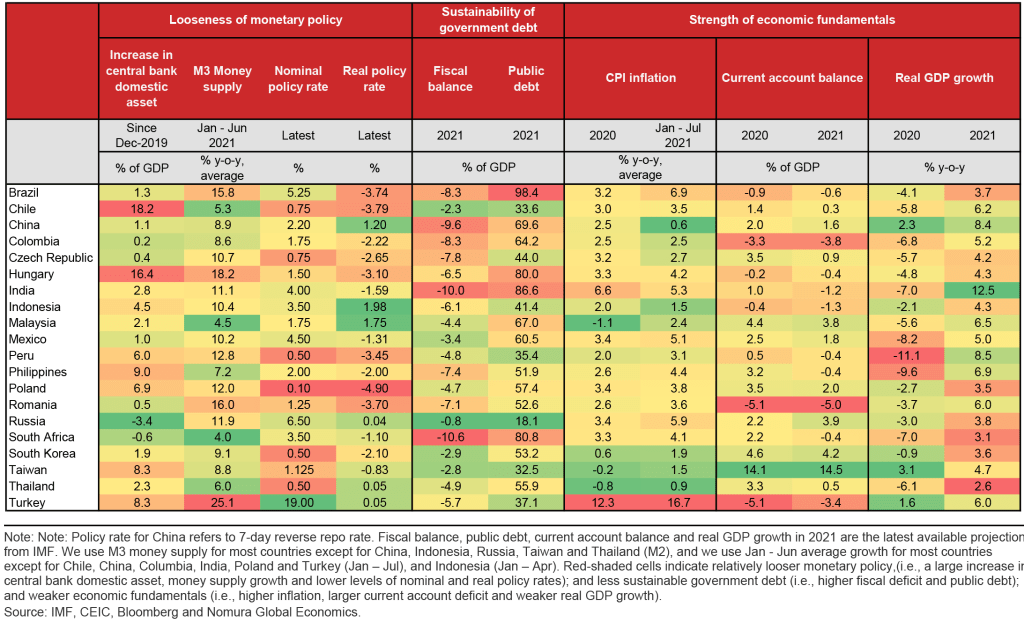 We have previously also warned of the emerging bank-sovereign debt nexus, with 60% of sovereign debt issued after January 2020 ending up on domestic bank balance sheets. In addition to crowding out bank lending to the private sector, there is the risk of a so-called bank-sovereign doom feedback loop, the type of loop that was at the heart of the 2009-10 European debt crisis. The doom loop can be triggered if the government needs to raise debt to recapitalise banks, and the increase in public debt raises sovereign risk which, in turn, generates potential bank losses via their sovereign bond holdings. Along with several frontier economies, Brazil and India appear most at risk of a doom loop.

The curse of too much portfolio inflow

Among the various types of capital flows, portfolio (debt and equity) investments are most closely monitored by market participants, and for good reason: these “hot money” flows have a tendency to abruptly reverse when foreign investors lose confidence in a country’s economic fundamentals. Conventional wisdom is that the larger the accumulation of capital inflows during good times, the greater the scope for abrupt outflows when bad times arrive. Based on this logic, some conclude that emerging markets today are less susceptible to large capital flight because, early on in the pandemic, they experienced record portfolio outflows in March-April 2020, and many emerging markets have experienced only a modest resumption of inflows since.

However, it would be inaccurate to conclude that emerging markets today are less susceptible to large capital flight, for two reasons. First, it is the cumulative capital inflows over a longer time frame that matters more, and while portfolio inflows to most emerging countries have been lacklustre during the pandemic, they were exceptionally strong over 2014-19. Second, while gross portfolio flow data are timely, they only measure transactions (that is, net purchases (or sales) by non-residents of emerging market equity or debt instruments). Portfolio flows do not measure market revaluations on the stock of existing emerging market financial assets held by non-residents due to asset price changes and exchange rate changes, and emerging market asset prices have risen substantially since 2013.

A better measure of cumulative inflows

This brings us to an alternative, and what we believe is an underutilised, statistic: the international investment position (IIP) of a country. Unlike capital flows, IIP measures the total stock of a country’s international financial assets and liabilities. Of the IIP data, we are most interested in portfolio liabilities, which comprise largely the stock, or accumulation, of all past gross portfolio inflows plus any changes in market value. Exhibits 2 and 3 show the data for Brazil and South Korea as examples of how the stocks of portfolio liabilities have experienced much larger movements (due to changes in market valuation) than cumulative gross portfolio inflows, and this can lead to very different interpretations of the scope for capital flight, in the event a country’s economic fundamentals sour. 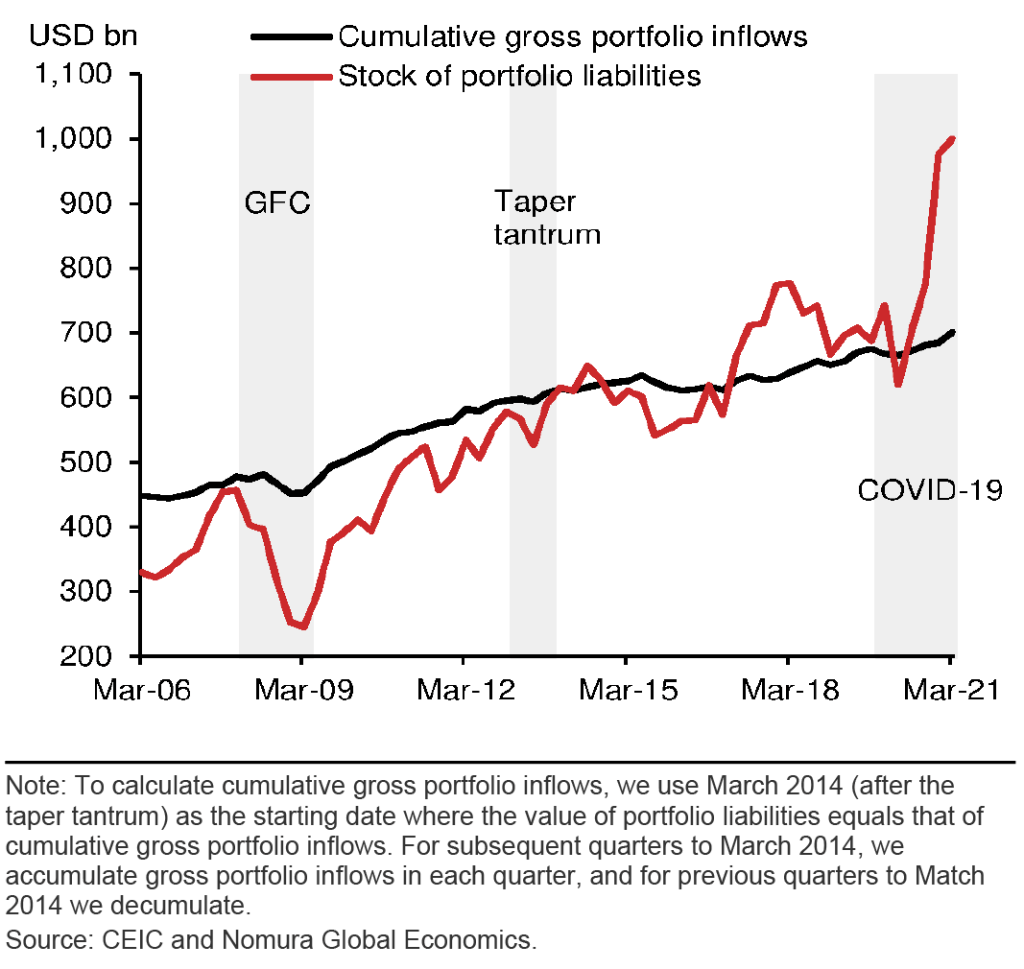 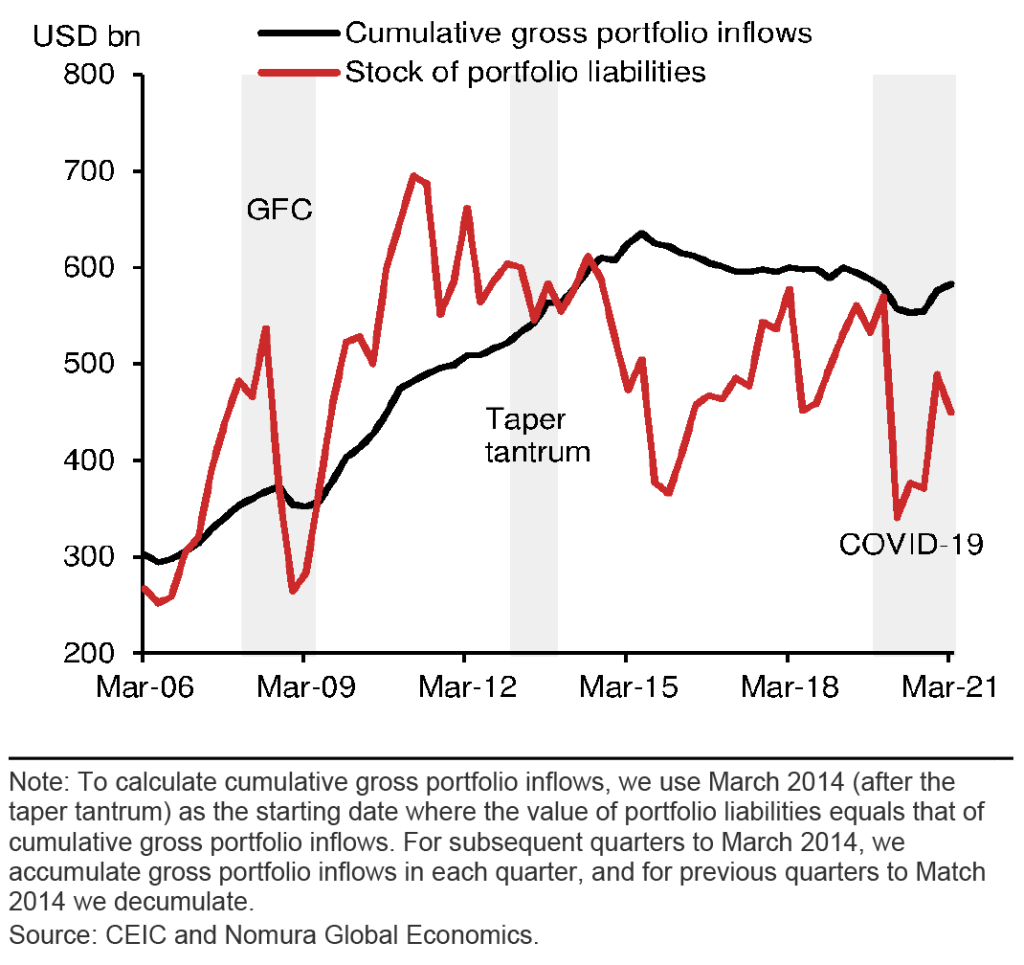 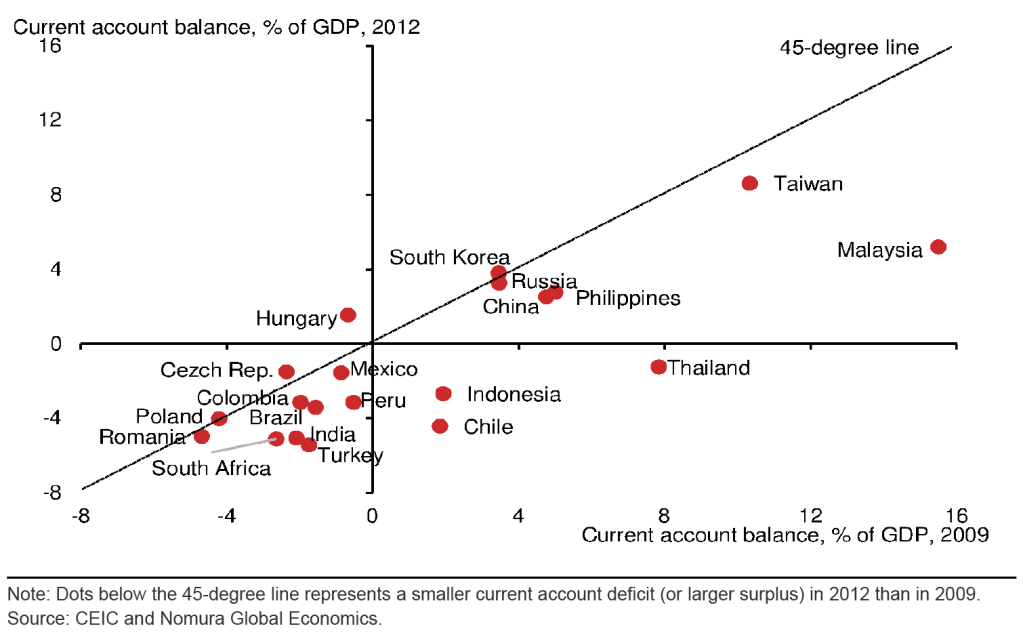 If the slow vaccination rollout in emerging markets accelerates in the next 12-18 months, as we expect, then the very large fiscal deficits in many emerging markets could leak into sizeable current account deficits relatively quickly.

The pandemic has resulted in extraordinarily large private saving-investment surpluses across emerging markets. One reason is the massive fiscal support. This has buttressed personal income at a time when government-induced economic recessions from locking down cities left households less opportunity to spend their income (particularly on services). The other reason is the dark clouds of economic uncertainty. This has discouraged companies from starting new investments and encouraged households to keep a higher precautionary savings buffer.

But these abnormally large private saving-investment surpluses are very unlikely to last. On our assumption that the vaccine rollout in emerging markets accelerates over the next 18 months and brings an end to the health crisis, we would expect government restrictions and public fear over the pandemic to ease. This should allow private consumption and investment spending to recover—rapidly at first if there is a burst of pent-up demand—causing the large private saving-investment surpluses to quickly narrow to more normal levels.

The large fiscal deficits are also likely to narrow, but more slowly in our view. The economic recovery should lift fiscal revenues, but governments may be slow to scale back spending (they may even boost it) to help address the uneven, K-shaped recovery. Furthermore, several emerging market countries are run by populist leaders who have struggled to maintain popularity during the pandemic and, short-sightedly, could opt for continued expansionary fiscal policies.

If, as we expect, the excessive private-investment surpluses shrink to more normal levels but fiscal deficits remain large, then sizable current account deficits are likely to emerge in several countries.

We have warned of three vulnerabilities lurking in the shadows that could make the prospect of the Fed normalising monetary policy amid China’s slowing more unpleasant for many emerging markets.