Russia’s invasion of Ukraine has created one of the biggest refugee crises of modern times
29.03.2022
Frank-Jürgen RichterFounder and Chairman of Horasis: The Global Visions Community

Due to Russia’s invasion of Ukraine and the exodus of millions of Ukrainians, we are witnessing a large-scale refugee crisis unfold. Since the early hours of 24 February 2022, more than 10 million Ukrainians have been displaced – either within Ukraine or to other countries. Neighbouring countries have been receiving Ukrainian refugees, with Poland taking in the most. Heart-warming stories of other nationalities pouring out to help these refugees provide us all with a glimmer of hope.

But if recent news is anything to go by, Russia’s military aggression against Ukraine is intensifying further. Russia’s military has been indiscriminate with its attack on civilian infrastructures such as schools and hospital buildings. Reports have also surfaced of Russian forces launching cluster munitions into residential areas. As the many Ukrainians remain to defend their independence, many unfortunately must leave.

How are refugees fleeing?

Refugees are grabbing whatever belongings they can and fleeing their homes in Ukraine. In the past few days Ukraine’s borders have been packed with refugees fleeing on cars and some even choosing to walk across.

Although Ukraine is not part of the European Union or Schengen Area, Ukrainian nationals are allowed to travel to almost all the EU/Schengen Area countries without the need to apply for a visa. Everyday thousands of people are leaving Ukraine through one of its largest train stations. Lviv’s grand train station has become a melting pot of people arriving from cities like Kyiv, Dnipro and Kharkiv trying to leave the country. The station is overcrowded with people—mostly women and children—as Ukraine’s wartime policy has prohibited men of military age (18-60) to leave the country.

The train carriages are pouring with every nook and cranny of the carriage filled with people either standing or seated on the floor. A journey that would have usually taken a couple of hours has extended to more than 10 hours.

As per the UN’s International Organization for Migration, an estimated 6.5 million people are internally displaced in Ukraine, living under dire humanitarian conditions.

What help is being offered to Ukrainian refugees?

The EU has allowed safe passage for Ukraine residents even if they do not possess valid documents to cross over. The EU has directed all its member countries to allow entry of Ukraine nationals on humanitarian grounds.

It has also dedicated a landing page on its website to assist refugees fleeing Ukraine. Refugees landing in any EU member country are eligible to apply for temporary protection lasting a year, which may also be extended depending on certain factors. Additionally, refugees are also eligible to apply for international protection (asylum) in the country of first entry in the EU.

European transport companies are waiving travel fees, allowing safe passage for distressed Ukrainian refugees. Austria is offering its public transport system, Wienen Linien and OeBB trains free of charge for fleeing refugees. Similarly, Finland is offering its Onnibus transports and VR trains free of charge, along with 95% discount on net fares for one-way tickets on Finnair. Wizzair has taken it a step ahead by offering 100,000 free seats for Ukrainian refugees on all continental Europe flights departing from Ukraine’s border countries.

UK has also launched “Homes for Ukraine” campaign that enables individuals, charities, community groups and businesses to provide accommodation to Ukraine nationals for a minimum of six months.

Similarly, recent news also suggests that there is some hope. Ukrainian President Volodymyr Zelenskyy has been saying that negotiations with Moscow are heading in a “more realistic” direction, and Russian Foreign Minister Sergei Lavrov has said that there is “hope for reaching a compromise.” That talks are continuing is a positive sign, with talks likely in Turkey this week.

For the many Ukrainian civilians and refugees who have had to witness the war first-hand and leave their country, hope is all there is. Hope that world leaders rise to the occasion to save the ordinary Ukrainian people. 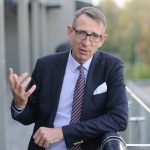