The state of global freedom

The decline in global freedom is an alarming trend exacerbated by the pandemic
16.03.2021
Unravel editorial team

An anti National Security Law protest in Hong Kong in May 2020. Global freedom continues its downwards trend. Photo by Shutterstock.

Democracy has been in decline around the world. Civil unrest, violent conflicts, uncertain economic conditions and the pandemic’s effects collectively strained the past year.

Many torchbearers of democracy were either silenced or placed under heavy sanctions. As detailed in the recent Freedom in the World 2021 report, world freedom has ‘continued to decline’ – marking the 15th consecutive year of declining global freedom.

This decline in world freedom has not only been registered in authoritarian states, but also in so-called democratic countries. As much as 75% of the world population lived in a country with a less than optimal democratic system in 2020, according to the Freedom House report. Countries such as China and Russia were quick to showcase their international influence while covering up domestic human rights abuses and “anti-democratic actors”.

The pandemic also saw certain countries increase their use of public surveillance and police force, greatly disrupting citizen’s rights. Misinformation and increased censorship gathered steam in others. In the initial days of the outbreak, for example, China’s state media ramped up its global disinformation and censorship campaign – this arguably affected a swift global response to containing the virus.

Following the US’ withdrawal from the UN Human Rights Council in 2018, China only gained further influence. It used its clout to further its vision of non-interference by imposing unfavourable laws in its territory of Hong Kong. Meanwhile, its citizens’ democratic rights were violated in several instances.

There has been a distinct spike in the number of countries limiting democratic freedoms following the Global Financial Crisis of 2008-09. The trend seemed to somewhat stabilise in 2018 and 2019, but the pandemic led to a further decline in these levels. 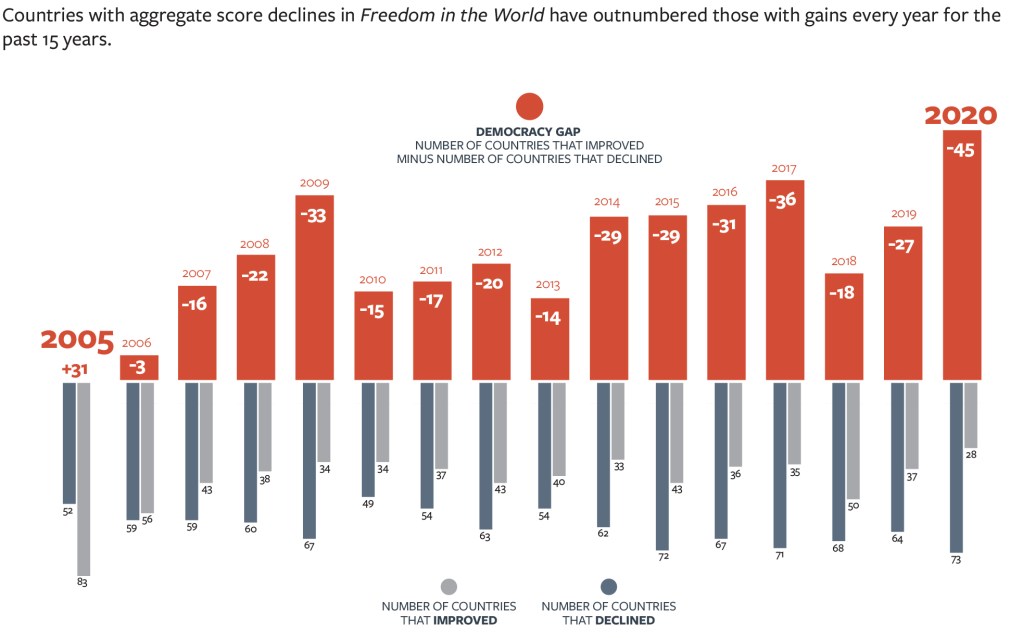 However, the COVID-19 outbreak alone cannot be held accountable. Falling scores in the areas of political rights and civil liberties have stemmed from several struggling democracies and authoritarian states that adopted less democratic ways of governance. The decline in the number of ‘Free countries’ and the corresponding increase in ‘Not Free countries’ dictated the state of global freedom. 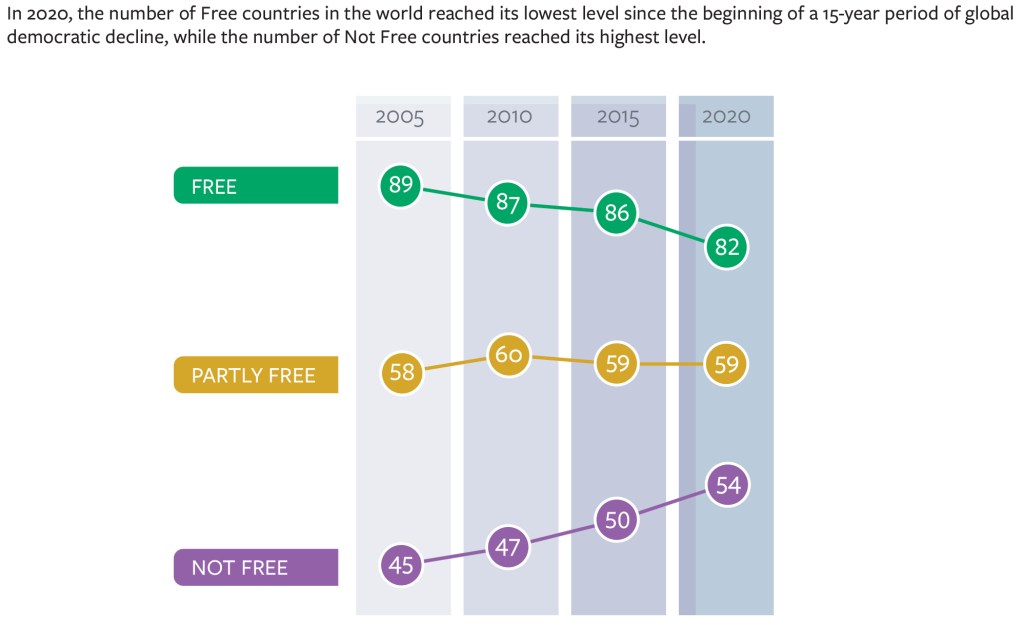 A few notable examples of declining democracy stood out. Electoral misconduct in Belarus resulted in Alyaksandr Lukashenka being elected to office yet again. The president has held the top office since 1994. Large protests and demonstrations erupted in the country following the declaration of election results. These were, however, met with ‘brutal crackdowns, mass arrests, and torture’.

The world’s largest democracy India dropped in status from Free to Partly Free, owing to the Narendra Modi-led government’s continued crack down on critics, and its response to the pandemic, which included a “ham-fisted lockdown that resulted in the dangerous and unplanned displacement of millions of internal migrant workers”. The government also continues to curb the freedom and influence of human rights organisations, imposing strict sanctions on their funding and activities. Meanwhile, its ideology of Hindutva, has sparked communal tensions.

“Rather than serving as a champion of democratic practice and a counterweight to authoritarian influence from countries such as China, Modi and his party are tragically driving India itself toward authoritarianism,” the report noted. 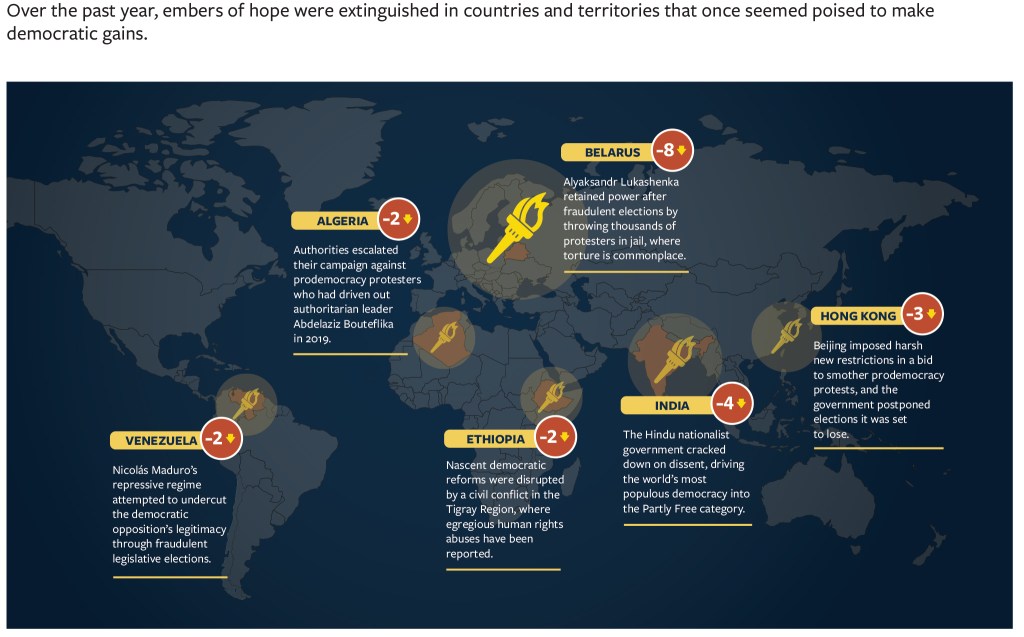 Not all is lost

Despite this alarming trend, there are also examples of democracies that have strongly endorsed democratic principles. Among the free countries recorded in 2019, 64% of them remain unchanged. These countries continued to embrace civil and political freedoms.

Malawi’s mid-2019 national elections’ results were scrapped, for example, with the constitutional court issuing a landmark ruling that called for fresh elections. Taiwan emerged victorious in its fight against the virus—in large part—due to its prior experience with SARS but also because the government “largely respected civil liberties”. Its voters also came together to re-elect incumbent President Tsai Ing-wen.

Exhibit 4: The resilience of democracy 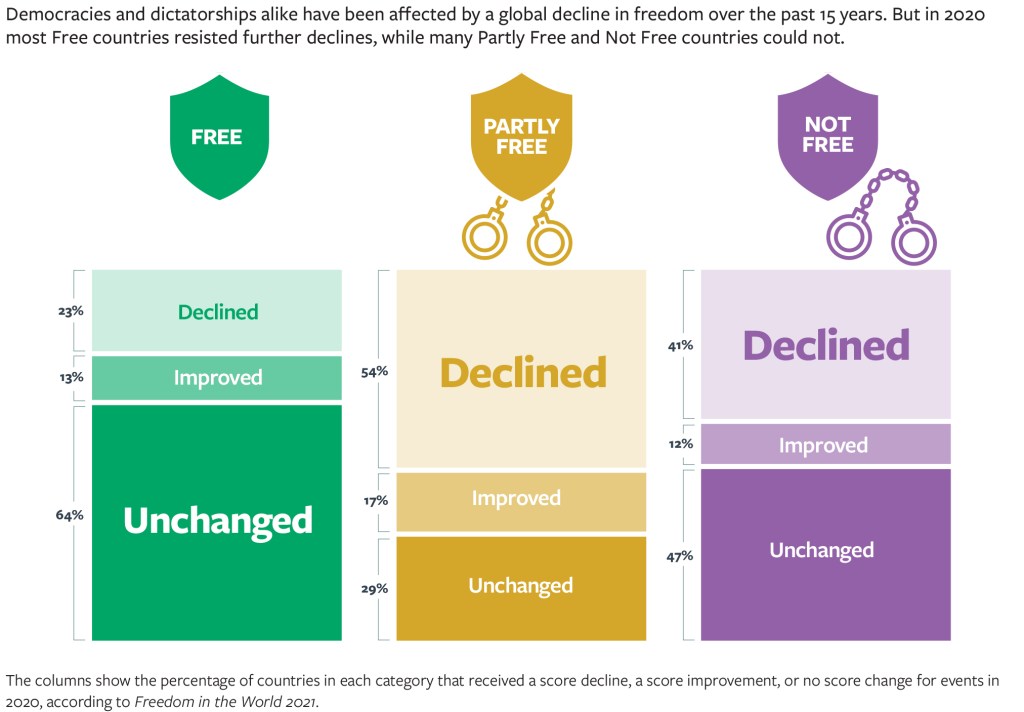 The pandemic vested powers in the hands of autocratic rulers who were quick to snub freedom. Some authoritarian countries and Partly Free regimes continued to strengthen control with no consequences. Countries such as China and Belarus withheld critical information on the virus outbreak, while Turkmenistan and Nicaragua denied the existence of the virus in their territories.

The US was scarred by continued racial, ethnic and gender inequalities over most of 2020. Freedom of personal expressions was greatly restrained too in many countries. Amid lockdowns in the Philippines, President Rodrigo Duterte ordered arrests of several social media users. Their alleged crime was voicing concern against the government’s shortcomings in managing the virus’ spread. Similar human rights abuses were also orchestrated in Cambodia.

The Asia-Pacific region does not paint a positive picture in terms of upholding public freedom. Less than 1 in 5 people are considered to be free in the region – one that is home to a population of 4.2 billion. And of the 39 countries that make up the region, less than half (44%) were considered Free democracies.

Exhibit 5: Status by population and country

The past year will not only be remembered for COVID-19, but also for how certain leaders used the crisis to their advantage. Thailand turned from a Partly Free country to a Not Free country. Protests calling for democratic reforms were violently suppressed and a popular opposition party was abolished. Myanmar had already begun showing signs of high-handedness towards internet freedom and public gatherings even before its February 2021 coup.

Amid prevailing circumstances, there is urgent need for the public and private sectors to encourage grassroot movements that call for change in failed systems, according to Freedom House. This can be in the form of ensuring press freedom and allowing voicing of citizen concerns. In addition, such efforts can be complemented by a focus on improving bilateral relations with allies and partners, it noted.