The s(co)urge of social media trolling

Nuance is a scarce commodity in the age of online aggression
22.12.2020
Ritesh Kumar SinghChief Economist of Indonomics Consulting and Former Assistant Director of the Finance Commission of India

Trolls have now become commonplace in an era plagued with absence of reason, where arguments are driven by emotion and bias, and not fact. Photo by Shutterstock.

Bullies have been around since time immemorial, but the access and anonymity provided by the internet has given flight to their antics and enhanced their effectiveness. Trolling is now inextricably mixed up with gender, religion and politics and has snowballed into a deadlier menace. It is a menace that endangers constructive discourse, an imperative in any democratic society.

The rise of the troll

The pervasiveness of social media platforms allows almost everyone with internet access to voice one’s opinion – substantiated or not.

To win votes and elections, politicians try to polarise voters along all kinds of identities, be it caste, colour of skin, food habits, language, nationalism or religion, often with the help of fake news and narratives. To this end, they cultivate trolls to out-sound those who oppose them or their views, with data or logic.

This has empowered trolls to go to any lengths, and the result is the outpouring of abuse and hate on social media platforms.

On the supply side, unemployed and desperate youth are often willing to be recruited as trolls by politicians, political parties, and even companies that want to silence critical consumer voices.

Finally, is the connivance of social media platforms themselves in aiding and abetting trolls. Trolls are the most frequent users of social media platforms. If these platforms start to strictly police trolls and fake news spreaders, they’ll lose an important user segment. That makes them go easy on trolls and fake news disseminators in the name of freedom of expression – unless forced to.

Trolls are easy to recognise. They don’t stick to the contents of an article or post. Rather, they invariably question the motive(s) of their targets. If it is a female target, trolls will often not attack her with data, facts or coherent arguments, but with comments on her looks, background or character to ridicule her.

In other cases, they will allege the target has a political “agenda” in case one makes a critical observation or statement on matters of public policy. For instance, these days, saying anything negative about the Indian economy or its poor management invites attacks from trolls who sympathise with the government.

Make no mistake, trolls are not limited to governments in power. Opposition parties, too, have their own troll armies. And corporations are not far behind either.

Deep political polarisation is a feature of many societies globally. In such a backdrop, easy and inexpensive access to the internet has unfortunately resulted in a phenomenon that is deeply impacting our societies in an unhealthy manner. Not only is it stunting the level of discourse, it is also, in some cases, deeply altering perceptions of how democracies should function.

It is easy to assume that trolls are ignorant and perhaps uneducated, but this is not always true. Many are well-educated and have successful professional careers.

In the case of what’s happening in India, it is fashionable to term people as being “anti-national” or Chinese or Pakistani “agents” working against Indian interests. I am often termed an “armchair economist” sitting in the comfort of my office, criticising government policies. One common refrain is that economists like myself do not offer any solutions, but only tend to criticise everything the government does. But in reality, there is no dearth of suggestions on how to make things better. In fact, if you provide suggestions, you’re advised to not do so in any publication but provide the government with the suggestions instead!

The absence of reason and the evolving nature of discourse

The shifting of narrative is a key tool in a troll’s playbook – either move goalposts, or indulge in whataboutery.

In short, there is an absence of reason. Arguments are driven by emotion and bias, and not fact. Many a time, even as economists, we decide not to speak if a topic is controversial or sensitive for fear of trolls who will go to any length to abuse and intimidate.

According to a recent Nielson survey, 40% of Indian women fear trolls when they access the internet. Almost every day, we hear of a high-profile person or celebrity dropping out of a social media platform after being abused and attacked by trolls.

I was trolled for a LinkedIn post that said (not argued, please mind the difference) Bangladesh is likely to surpass India in per capita income while referring to IMF data. You’d be surprised to see the kind of comments and reactions that followed: “You’re ruining the country’s reputation”; or “You have a political agenda for posting such negative news about India. We’re a more diversified economy so you can’t say Bangladesh is better than us.” I didn’t. All I did was compare one aspect of the two economies, following the publication of a news report on that topic.

I know of many individuals who do not share their views openly, publicly even when they have something valuable to share, because they fear a backlash from trolls. I know of others who have quit various social media platforms for the same reasons.

Political parties increasingly rely on fake news and trolling (the two often go hand-in-hand) to advance their political goals. Those who ask questions or present data contrary to the claims made them are out-shouted, or worse, they are abused or threatened by their loyal trolls. Due to this potential for a backlash, many decide to not air their views.

To win votes and elections, politicians try to polarise voters along all kinds of identities, be it caste, colour of skin, food habits, language, nationalism or religion, often with the help of fake news and narratives. To this end, they cultivate trolls to out-sound those who oppose them or their views, with data or logic.

So we have a situation wherein those who might have something valuable to add to a discussion are choosing to remain silent, and instead, we have a lot of noise, abuse and vitriol. Top leaders of political parties can avoid difficult questions and instead pander to trolls. In my view, this is weakening democracies around the world, and that is worrying.

I mainly write about Indian government policies with a focus on business and the economy, and lately, we have had more bad news than good on that front. My articles therefore tend to be more critical than appreciative of the government’s policies, which means I’m at the receiving end more often than not.

Fortunately, as I’m more active on a platform like LinkedIn. Thus, I’m more accustomed to “soft” trolls, who are different. They are educated and employed, and may not be overtly abusive, but they have the same intention – which is to harass and silence individuals with views and opinions they’re not in agreement with. These trolls tend to share confusing counter-data or make comments that are only tangentially related to the topic and side-step important facets of a discussion.

Over the years, I have learnt to deal with trolls. In fact, the abusive trolls are easiest to deal with. Just ignore and never engage with them, especially those who choose to remain anonymous. One can simply block them if attacked repeatedly.

But there are others who use strong words to pronounce judgement (often without substantiation), and accuse you of having an agenda, or attempt to discredit your reputation or motives. Responding to such trolls is necessary.

Exhibit 2: Pronouncing judgement on what is fake and what is real 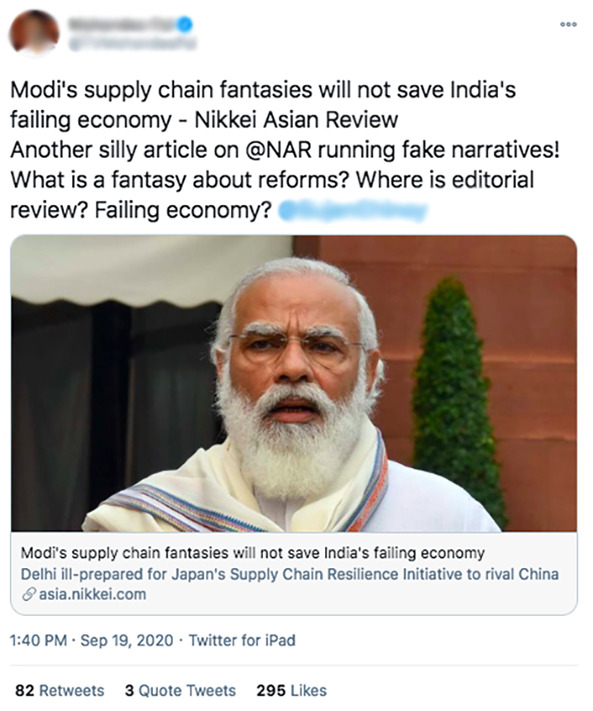 Most of them shoot from the hip and then simply disappear when asked to explain their reasoning or elaborate on their arguments. The few who do elaborate, write because they feel compelled to.

Is a return to civility possible?

In a highly polarised society (as is presently the case in India and in many other democracies around the world), a return to civility seems unlikely, at least in the short run.

Deep political polarisation is a feature of many societies globally. In such a backdrop, easy and inexpensive access to the internet has unfortunately resulted in a phenomenon that is deeply impacting our societies in an unhealthy manner. Not only is it stunting the level of discourse, it is also, in some cases, deeply altering perceptions of how democracies should function.

In any democratic society, we need to be able to agree to disagree. For now, this is but a pipe dream.

Ritesh Kumar Singh is a business economist and currently the CEO of Indonomics Consulting Private Limited, a policy research and advisory startup based in India. He was a former assistant director of the Finance Commission of India.