The Central Bank of Brasil is seen in this image. Among the emerging markets, Brazil, India, Hungary and South Africa have large fiscal deficits along with high public debt. Photo by Shutterstock.

Juxtaposed against the sustainability of public debt and the strength of economic fundamentals, our assessment is that several EM central banks are at risk of having overreached—or eased monetary policy too far relative to economic fundamentals—particularly if DM bond yields keep rising. 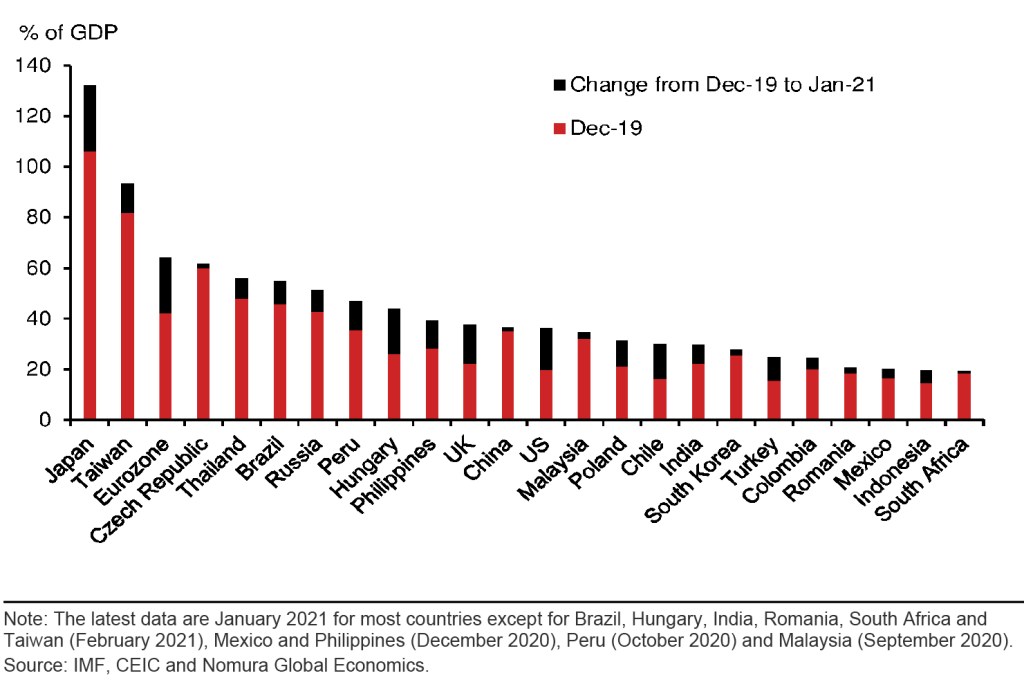 In response to the COVID-19 crisis, EM central banks aggressively implemented a broad range of measures to ease financial conditions, restore market function and support their economies. Between March and July 2020, the majority of EM central banks slashed policy rates, in many cases to record lows.

This stands in stark contrast to the 1997-98 Asian Financial Crisis, the 2008-09 Great Financial Crisis and the 2013 Taper Tantrum, when EM policy rates were increased to stem massive capital outflows, excessive currency depreciation and a tightening of financial conditions.

Some argue that EM central banks have developed greater leeway to ease monetary policy because they have moved to more flexible exchange rate regimes, and gained credibility in achieving their inflation targets.

However, taking a more skeptical view, the actions of DM central banks may be the primary reason for this paradigm shift: in response to COVID-19, DM central banks slashed policy rates to zero (or negative) and adopted quantitative easing of unprecedented size such that the interest rate differentials between DM and EM have remained more stable, and portfolio flows were ‘pushed’ to higher-yielding EM, even though EM central banks were easing monetary policy.

Importantly, the EM central bank policy response to the COVID-19 crisis was not limited to just cutting policy rates. Most have introduced new innovations to their policy toolkits, including launching sovereign bond purchase programmes, many for the first time.

Typically, these have been funding-for-lending arrangements where the central bank provides low-cost funding to participating banks on the condition that credit is extended to firms most affected by the pandemic. In some cases, EM central banks provided credit guarantees or directly purchased high-grade corporate debt. 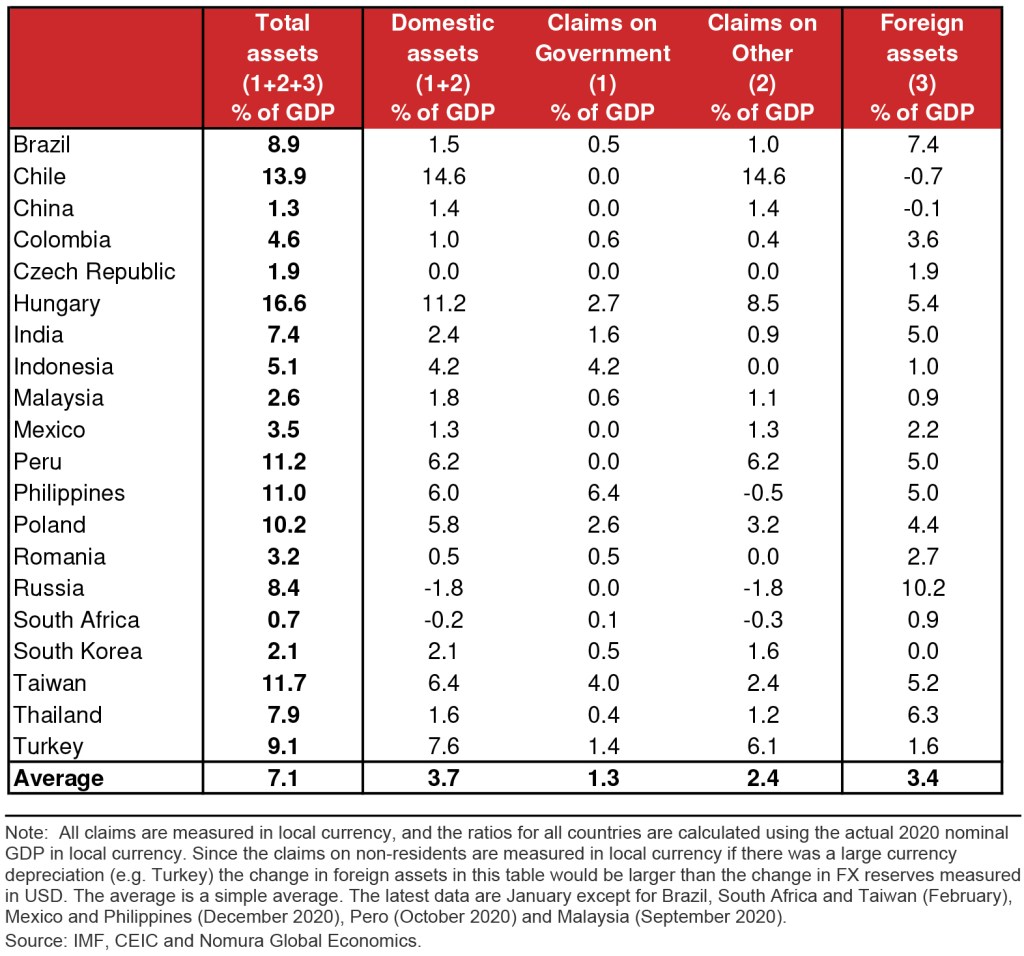 Exhibit 2 shows the results of our study of 20 EM central bank balance sheets from end-2019 to January 2021. Over this period, our 20 EM central banks’ claims on government (that is, sovereign bond purchases) increased on average by 1.3% of GDP, with the largest increases in the Philippines (6.4%) and Indonesia (4.2%). Their ‘other’ domestic claims (that is, claims on banks and the corporate sector) increased by an average of 2.4% of GDP, with the largest gains in Chile (14.6%) and Hungary (8.5%). Combining claims on government and ‘other’, total domestic assets of our 20 EM central banks increased by an average of 3.7% of GDP.

The average increase in domestic assets is larger than the increase in foreign assets, a departure from historical experience when FX intervention and the build-up of foreign assets had been the main driver of EM central bank balance sheet expansion.

In March-April 2020, most EM central banks responded to large-scale portfolio outflows by running down FX reserves to limit the extent of currency depreciation, but more recently some central banks—most notably Russia and some countries in Asia—have been intervening in FX markets to limit the appreciation of their currencies, thereby rebuilding their foreign assets.

The risk of overreach

While most EM policy rates are at, or close to, record lows, they are not zero or negative like their DM counterparts, and EM quantitative easing has also been done on a smaller scale. But, comparing the extent of monetary policy easing in EM to DM may not be the right approach for two reasons. First, many EM economies have higher potential growth rates—and therefore a higher natural rate of interest—than DM economies. And second, global investors typically demand a higher return to compensate for the greater perceived risk in investing in EM over DM. The EM risk premium over DM can reflect various shortcomings, from less liquid capital markets and weaker economic fundamentals to less credible policy frameworks and higher political risks.

We are in the camp that EM central banks had an unusual amount of leeway to ease monetary policy last year primarily because of the extraordinary scale of policy easing by DM central banks that promoted the hunt for yield in EM. But this year, as DM bond yields rise, EM central banks will in all likelihood lose some of their policy leeway.

Another potential catalyst for the repricing of EM risk premia, in addition to the rise in DM bond yields, is the weakening in EM economic fundamentals over the past year, most notably the marked deterioration in fiscal finances, although inflation has also begun to rise in several EMs and current account surpluses are projected to swing back into deficits (as domestic demand and imports recover).

To help assess the risk of EM central bank overreach, we examine several indicators and group them into three risk buckets – the looseness of monetary policy, the sustainability of government debt and the strength of economic fundamentals.

At first glance, it is striking just how loose EM monetary policy has become. In our study of 20 EM central banks, seven currently have nominal policy rates below 1%, 10 have real policy rates below -1% and seven have experienced a sharp increase in their domestic assets. However, very loose monetary policy in itself is less of a concern if fiscal finances are relatively healthy and other economic fundamentals are in relatively good shape. After all, most EMs are still in the early stage of recovery from deep recessions.

Fiscal dominance and falling behind the curve

The concern of central bank overreach arises if very loose monetary policy is starting to look conflicted with two key signposts: 1) fiscal finances appearing on an unsustainable path (the danger of fiscal dominance); and/or 2) signs that other economic fundamentals are weakening (such as the risk of the central bank falling behind the curve). Of course, this analysis is far from complete, as many other economic variables could be included, and central bank overreach could occur due to non-economic shortcomings, such as rising political and geopolitical risks. Bearing these limitations in mind, and based on our results, we would raise the red flag for the following EMs, which we have sub-divided, subjectively, into “most at risk” and “at risk” categories.

Signpost 1 – The danger of fiscal dominance

Most at risk: Brazil, India, Hungary and South Africa

At risk: Colombia, Mexico, Poland and the Philippines

Countries that fall into this group have large fiscal deficits and high public debt, raising concern over fiscal sustainability, while at the same time their monetary policy is very loose. The central banks of these countries risk falling into the trap of fiscal dominance and losing their monetary policy independence, as governments pressure them not to normalise monetary policy, because it would lead to higher sovereign borrowing costs. Some of these countries are struggling with large new waves of COVID-19 infections (Brazil, Colombia, Hungary, India, Poland, the Philippines) and/or are the laggards in economic recovery (South Africa, Mexico, the Philippines), increasing the pressure on the central bank to continue with very loose monetary policy. Over time, if central banks start to lose monetary policy independence, they risk falling behind the curve in achieving their objectives (see Signpost 2).

Signpost 2 – Falling behind the curve

Most at risk: Brazil, Chile, Colombia, Peru, the Philippines, Romania and Russia

Countries that fall into this group have signs of weakening economic fundamentals—either rising inflation, rapid broad money supply growth, a sizeable current account deficit or a deep, prolonged recession—in conjunction with loose monetary policy. An emerging theme for several countries is rising inflation—combined in a few cases with rapid money supply growth—that is likely to continue given the rise in commodity prices, COVID-19-related bottlenecks and pent-up demand plus base effects. Some of these countries have sizeable current account deficits despite weak GDP growth, in part because they are large net importers of commodities.

What we find striking from our analysis is that eight out of 20 central banks that we judge are in some danger of fiscal dominance—Brazil, Colombia, Hungary, India, Mexico, Poland, the Philippines and South Africa—also appear to be among the ones showing nascent signs of falling behind the curve.

The danger of falling too far behind the curve is that, often suddenly, markets exact punishment through currency depreciation, widening credit spreads and slumping equity prices. If the currency depreciation is extreme, it can lead to even higher inflation and tighter financial conditions, creating a very challenging environment for policymakers. With major DM central banks experimenting on how hot they can run economies before inflation becomes a problem, EM central banks will need to be extra careful to not fall behind the curve, and will likely need to lead, rather than follow, their DM counterparts in the next rate hiking cycle.