The IFC’s country manager for Singapore speaks about the role of the private sector in Southeast Asia’s post-COVID economic recovery
28.12.2021
An interview with
Nicolas MarquierCountry Manager, Singapore at International Finance Corporation (IFC)

An aerial view of Depok Antasari toll road interchange and Jakarta outer ring road in Jakarta. Private sector investment in infrastructure in the region can help build resilience into infrastructure. Photo by Shutterstock.

This piece was among the most widely read over the last year on Unravel. It was first published on 04 May 2021.

Asian governments have had a difficult time dealing with the scale of the coronavirus pandemic’s socio-economic and health impacts. As the region’s economies grapple with wave after wave of infections—and simultaneously endeavour to get back on their feet—the role of the private sector cannot be overlooked.

In this interview, Nicolas Marquier, Singapore country manager at International Finance Corporation, a member of the World Bank Group that’s focused on private-sector development in less developed countries, talks about areas in which the private sector can support the economic recovery by helping create jobs, invest in innovation and plug a variety of financing gaps. He also talks about the changing nature of the relationship between governments and companies.

Unravel: What role do you see for the private sector in the post-COVID economic recovery in Southeast Asia?

Nicolas Marquier: This is a broad question. The first thing that comes to mind is the importance of the private sector in creating jobs. The COVID crisis has had a big impact on employment in many countries, and in particular, the poor and women have been disproportionately impacted. Governments are spending a lot of resources on COVID, and we cannot expect the public sector to create more jobs as there is no fiscal space for that. Most jobs are in the private sector, and the recovery in jobs really has to be driven by this sector.

We are also starting to realise that the old “normal” isn’t coming back and that work trends driven by the pandemic are here to stay. Innovation and tech in the private sector have played an important role in the digitalisation of processes and the economy. There are two aspects to this – one aspect is efficiency and standardisation of processes, and the second, which is most important to us, is inclusion. Digitalisation tends to give people access, be it to financial services or to global supply chains. In addition, it also gives transparency to processes, for example in the case of digital payments.

The third is tax revenue, which is indirectly about restoring the fiscal health of governments. It isn’t all about the private sector and governments have a very important role to play in the provision of services too, such as primary healthcare, education and other basic services. But for all of this, governments need tax revenue, and that comes from a vibrant private sector.

Unravel: Many Asian governments are faced with severe financing constraints given the economic downturn, resulting in declining revenues precisely when public expenditure ought to increase. In your view, can the private sector plug any gaps here? If so, how?

Mr Marquier: Pandemic responses have been quite striking, with fiscal stimulus packages being equivalent to about 5% of GDP on average in Asia. That has increased the fiscal deficit of many governments, and some like the Philippines and Indonesia have had to borrow in the markets. Debt levels are at 50% of GDP on average, and in a few countries like Laos and Malaysia, they are higher. So, as you say, there isn’t much fiscal space to do much more and the gaps will need to be plugged with help from the private sector.

In terms of how, there is lots of low hanging fruit. There is a very significant infrastructure gap in the region. Traditional sectors such as energy, logistics and transportation as well as urban infrastructure and digital infrastructure are in scope. Building resilience into infrastructure is also a huge opportunity. One interesting statistic is that the overall net benefit of investing in the resilience of infrastructure in developing countries would be $4.2 trillion over the lifetime of new infrastructure. That is a $4 benefit for each dollar invested in resilience, thanks to fewer disruptions and reduced economic impacts, so it is a good investment. With the right regulations and risk mitigation structures, the private sector can plug these gaps.

It has to be done properly, of course, so there have to be clear rules, pricing structures and contracts that are respected and honoured. This can be through public private partnership (PPP) frameworks or in other ways. Policy and market reforms will be needed first in many cases, as some countries are not ready yet.

Beyond infrastructure, we are seeing more diversification in the manufacturing space. New countries are coming onto the map for different products, which is a good thing. Food security continues to be a challenge in many places. And then there are vital services such as health and education to consider. So there are many areas, but in several countries, it is not necessarily straightforward for the private sector to invest in many of these sectors – that’s where regulatory reforms come in.

Unravel: Has there been a discernible change in how governments are approaching the role of the private sector, or is it too early to speak of a change yet?

Mr Marquier: Specific to infrastructure, developed markets have been opening up to the private sector for solutions and financing for a long time now. In emerging markets, there is still quite a bit of work to do on the regulation front, including on risk allocation and mitigation to make sure transactions are bankable and can attract international investors. But we are seeing governments willing to take steps to this end, and we are starting to see change.

We are also seeing movement in the way transactions are packaged to tap capital markets and achieve scale, whereas in the past it was more one deal at a time and mostly project finance type of transactions.

For instance, Continuum Green Energy’s first green bond, which was listed on the Singapore stock exchange earlier this month, allowed the company to raise funds in international capital markets to finance much-needed renewable energy for corporates and the growing industrial sector in India. It was oversubscribed and raised $561 million, and IFC was the anchor investor.

* In Part II of this conversation, we discuss the role of the IFC in supporting the private sector and Singapore’s importance as a financing hub in Southeast Asia. 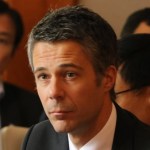 As country manager, Nicolas manages IFC’s Singapore hub office serving all Asia and Pacific sub-regions. With its regional investment and advisory teams, he coordinates IFC’s business development efforts with Singapore based companies to drive cross-border activities and private sector mobilisation. IFC’s teams in Singapore invest in projects across sectors such as agribusiness, infrastructure and financial institutions. They also provide advice to companies and governments on key areas of private sector development.