The pandemic has further exacerbated discrimination faced by women at the workplace, and organisations must address this by enabling women leaders
01.12.2020
Rosie CairnesVice President, Asia-Pacific at Skillsoft

COVID-19 is being touted the 'pink pandemic' owing to the disproportionate impact it is having on women. Asia, and the world, needs more women leaders at the workplace. Photo by Shutterstock.

As we continue to battle COVID-19 globally, one of the most frightening things about the pandemic is the disproportionate impact it has had on women the world over, earning it the title of ‘The Pink Pandemic’.

High female representation in hard-hit industries like healthcare, hospitality, retail and tourism, the increase in domestic violence, the compounding effect of the gender pay gap and the role women play as caregivers, there is no doubt that COVID-19, unlike other viruses, does discriminate by gender.

Pre-existing inequalities like the gender pay gap and childcare burdens have been exacerbated in a world of job losses, increased by financial strain and home-schooling. This is a frightening time for everyone, but there is one thing for certain. In order to bounce back stronger than before, we must work toward closing the gap and doing all we can to support female leaders across Asia-Pacific.

Let numbers do the talking

Women in Asia are on average 70% less likely than men to be in the labour force. The number of female-owned and run businesses is less than half the number for men. The gender gaps of disadvantage in the labour market are more pronounced in the Asia-Pacific region than across the OECD, and women in the Asia-Pacific region are therefore more likely to experience poverty and deprivation. In Asia-Pacific, there is only one woman in leadership positions for every four men. And often forgotten, women carry out most of the unpaid work, providing care to children, elderly, and sick or disabled family members as well as doing other unpaid household work. In the Asia-Pacific region the gender gap in unpaid work is about three hours per day.

These are disappointing numbers. According to McKinsey, advancing women’s equality in the countries of Asia-Pacific could add $4.5 trillion to their collective annual GDP by 2025, a 12% increase over the business-as-usual trajectory.

Promisingly, COVID-19 may have given businesses the shake-up they need to really address gender equality and workplace diversity. Recent research from Skillsoft examined employee expectations in a post-COVID workplace and found the top two issues that Asia-Pacific workforce wants their employers to support the most are offering flexible work for parents of both genders (38%) and hiring and supporting more older workers (33%). Other top line issues include ensuring equal gender representation on the leadership team, supporting equal maternity and paternity leave, and monitoring, reporting and working to close the gender pay gap (25% respectively).

On average in the region, women’s representation on boards increased from 6% in 2011 to 13% in 2016. This change appears partly to reflect regulations and corporate policies instituted during this period.

Globally the pandemic has brought many of society’s inequities to the fore, and in some cases given people a taste of how things can work better, particularly in terms of caring responsibilities. Across Asia-Pacific there is a strong push for policies and practices that promote greater gender, age and racial balance – and this push will only grow stronger as more young people enter the workforce. Organisations that rethink their hiring policies and focus their future learning and development in these areas stand to benefit hugely in terms of available talent, employee engagement and retention.

While we do not yet have gender equality in the workplace, in many areas the situation is getting better. McKinsey states on gender equality in work, the Philippines stands out for its progress, followed by New Zealand and Singapore. Asia-Pacific nations have made progress in the past decade, driven by a combination of economic development, government measures, technological change, market forces and activism.

On average in the region, women’s representation on boards increased from 6% in 2011 to 13% in 2016. This change appears partly to reflect regulations and corporate policies instituted during this period. For instance, India has made it mandatory for companies to have at least one female director. The number of women on the Boards of ASX-listed companies grew from 8.3% in 2009 to 29.7% % in 2018, and as of September 2020 this number stands at 31.8%. This is perhaps thanks to a workplace diversity policy implemented by the ASX Corporate Governance Council in 2010.

When talking about gender parity I often hear the problem is that, when it comes to looking for people to fill the top leadership positions, there are just not enough female candidates with the relevant and appropriate experience. While many factors contribute to not only this thinking but also how it translates in the business world, I think we can start by providing directed and focused leadership preparation.

One of the most frightening things about the pandemic is the disproportionate impact it has had on women the world over, earning it the title of ‘The Pink Pandemic’.

Organisations need to provide targeted leadership development training designed to help women overcome gender biases and learn the skills and capabilities needed to step up and step into the roles required to give them the experience necessary to assume even more responsibility and power.

Let’s not waste any more talent. Let’s get women moving further up the ladder and taking their well-deserved seats at the table. 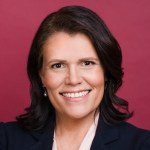 Rosie has more than 23 years’ experience working with both national and global organisations across industry sectors and with government agencies. Specialising in cloud-based learning and performance support solutions, Rosie's goal is to help organisations align learning with strategic business goals to deliver quantifiable results and impacts that benefit both the organisation and their employees. Rosie has led the Skillsoft Australia and New Zealand business for the past seven years and has recently taken on responsibility for the Asia-Pacific Region.