The Fed believes the rise in inflation is transitory, allowing to maintain a very accommodative policy. But what if it is wrong?
26.10.2021
Robert SubbaramanManaging Director, Head of Global Macro Research at Nomura
Rebecca WangMacroeconomic Research Analyst, Asia ex-Japan at Nomura

The United States and the Federal Reserve System flags. Illustration by Shutterstock.

To appreciate the Federal Open Market Committee’s (FOMC’s) core members’ continued dovish forward guidance in the face of rising inflation, it is important to understand where the Fed is coming from.

For nearly four decades, monetary policy was guided by a strong presumption that accommodation should be reduced pre-emptively when the unemployment rate nears its estimated natural rate, or otherwise high inflation would soon follow. However, over time with a flattening of the Phillips Curve—inflation less sensitive to declines in the unemployment rate—and the Fed consistently undershooting its inflation target, it became clearer that it was possible to run the economy hotter for longer without stoking inflation.

And the gains from a longer economic expansion could be shared more widely across society, generating more jobs for low-income households. The Fed in particular learnt from its 14 ‘Fed Listens’ events in communities around America in 2019 that running the economy hotter for longer can greatly help the low-income, minority groups, which tend to be the last to experience employment gains during recoveries. From these town hall events, the Fed also learnt that the unemployment rate obscures important information, including despondent jobseekers that gave up and left the workforce altogether.

Against this backdrop, the Fed conducted an extensive review of its monetary policy strategy in 2019, and announced a new framework in August 2020 to address the important changes in economic relationships that had led to inflation persistently below target and the policy rate near the effective lower bound.

The new framework calls for monetary policy to (i) seek to eliminate shortfalls of employment from its maximum level, in contrast to the previous approach that called for policy to minimise deviations when employment is too high as well as too low; (ii) define the maximum level of employment as a broad-based and inclusive goal assessed through a wide range of indicators, not just the unemployment rate; and (iii) adopt a flexible average inflation-targeting strategy that aims to achieve an inflation rate of 2% on average over time and allows inflation to run moderately higher than the 2% target for some time to make up for past misses of inflation to the low side of the target.

A spanner in the works

The Fed’s new monetary policy framework appears to have been crafted on the assumption that the maximum employment goal would be achieved first, followed by rising inflation.

Indeed, rising wage inflation would be a key signal that the opaque maximum employment goal has been achieved. This new framework avoids the need to tighten monetary policy pre-emptively and was designed with demand-pull inflation in mind, no doubt motivated by past experience, most notably in 2019 when the unemployment rate fell to as low as 3.5%—near 50-year lows—and yet inflation still did not rise above 2%.

But then came the pandemic and more frequent shocks from climate change-related events. Together, they have led to an array of supply bottlenecks and significant cost-push inflation. The reverse sequence of inflation rising well above target before the full employment goal has been achieved is not particularly well suited for the Fed’s new monetary policy strategy that has prioritised achieving maximum employment.

The Fed, however, has not blinked. It has staked out a firm position that the rise in inflation is transitory, and under the new framework this allows it to maintain a very accommodative policy to achieve its maximum employment goal.

What if the Fed is wrong?

But what if the rise in inflation is not transitory? What has become a series of supply-side shocks—from shipping to semiconductors to now energy—combined with still-significant policy stimulus and the reopening of the economy, could push the unemployment rate low enough to boost wage inflation and de-anchor longer-term inflation expectations (some prominent economists warn of this outcome, including Olivier Blanchard and Lawrence Summers).

At the September FOMC meeting, the participants seemed cognisant of this risk, for while their median projection was for core personal consumption expenditures (PCE) inflation to drop from 3.7% in 2021 to 2.3% in 2022, 13 of the 18 participants saw the balance of risks to their projection weighted to the upside. In fact, the Fed’s diffusion index of participants’ risk weightings on their core PCE projections in June and September was at its most elevated since the survey first began in October 2007 (Exhibit 1). 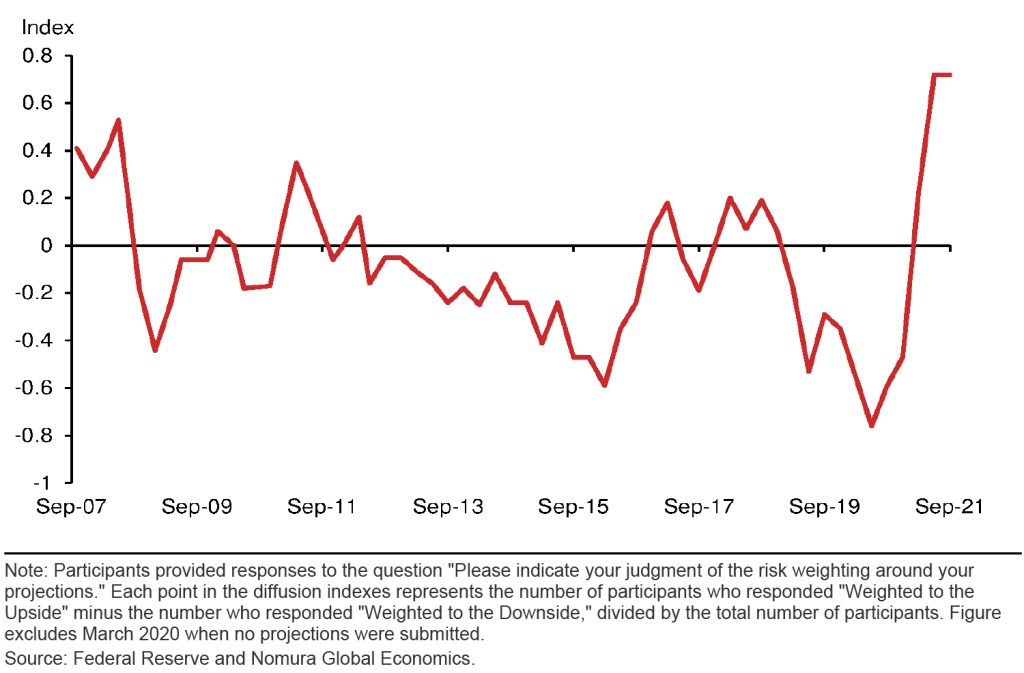 Even if the supply bottlenecks ease, it is possible the world enters a new era where some of the mega global deflationary trends in the past quarter of a century are offset by new structural inflationary trends – after all, behavioural changes and shifts in public opinion should not be unexpected following a once-in-a-generation global shock.

Drawing on the work by Professor Nouriel Roubini, there are potentially many new sources of medium-term structural inflationary trends: these include a demographic-led shrinking of the global labour force; de-globalisation from the reshoring of manufacturing, rising protectionism, migration restrictions and Sino-American ‘decoupling’; the effects of climate change on commodity prices; stronger trade unions and policies that increase workers’ bargaining power, as a social and political backlash against wealth inequality; more frequent cyberattacks on critical infrastructure; and a secular rise in house prices.

New model simulations produced by the IMF this month show that, in a worst case of a self-fulfilling inflation spiral that de-anchors inflation expectations, headline inflation would peak next year at around 12% in advanced economies and 25% in emerging market economies (Exhibit 2). 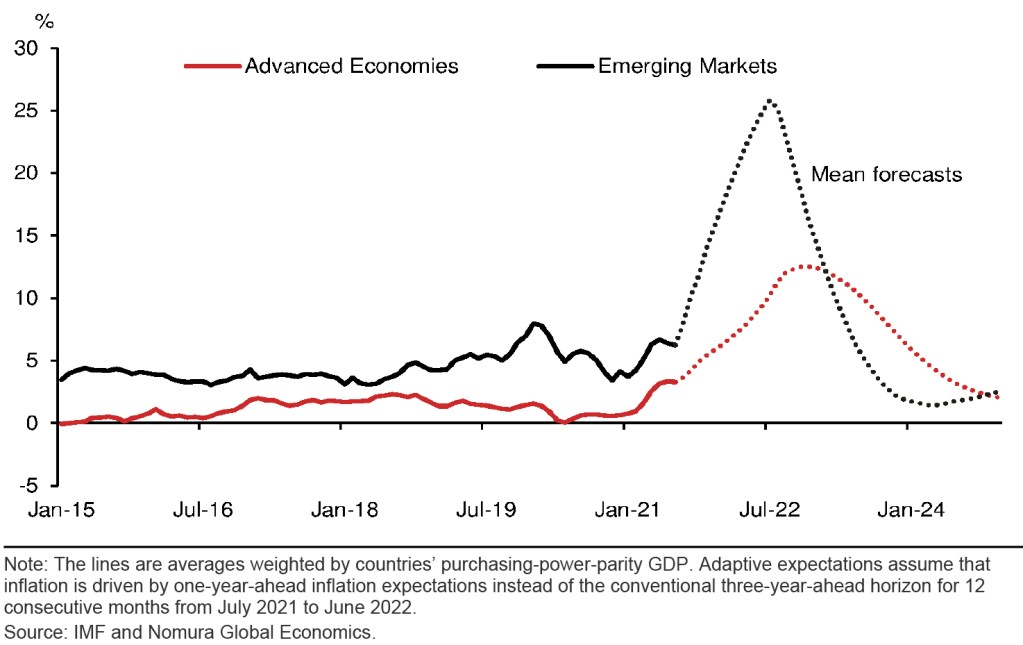 The new monetary policy framework and the Fed’s dogmatic forward guidance leaves it—almost by design—behind the curve if it is wrong about transitory inflation. The FOMC’s ‘goldilocks outlook’ in 2022—the median projection is for core PCE inflation to fall back to 2.3% (from the most recent reading of 3.6%) and the unemployment rate to drop to 3.8% (from the current reading of 4.8%)—allows a dovish commitment to monetary policy.

Even though half of the FOMC participants expect Fed funds rate lift off in the second half of 2022, the anticipated pace of tightening is slow. The median projections of the Fed funds rate at the end of 2024 is 1.8%, still well below the participants’ longer-run, or neutral, interest rate projection of 2.5%.

The Fed’s more liberal use of policy discretion has started to contradict the signals from policy rules. Professor John Taylor, the pioneer of monetary policy rules, warned a few months back that “eventually, the Fed will have to return to a policy rule, and when it does, the conundrum will disappear. The sooner this occurs, the smoother the recovery will be. There is still time to adjust and get back to a policy rule, but time is running out.”

Fed Chair Powell warned at this year’s Jackson Hole symposium that, because of the lagged effects of monetary policy, responding to high inflation that turns out to be transitory can do more harm than good, by pushing economic activity and inflation lower than desired in 2022.

However, the untold truth is on the other side of the risk spectrum. If the Fed turns out to be wrong on transitory inflation, it would be a significant blow to its credibility; to re-establish its inflation-fighting credentials the Fed would need to hike rates sharply to catch up, as suggested by monetary policy rules. And herein lies the Fed’s policy dilemma. As the IMF put it in its latest World Economic Outlook (see Chapter 2: Inflation scares), “policymakers need to walk a tightrope between acting patiently to support the recovery and at the same time preparing to act quickly if inflation expectations show signs of de-anchoring.”

If the Fed is wrong on transitory inflation, the longer it waits, the more costly it will likely be to rein inflation back in.

A much faster-than-anticipated Fed rate hiking cycle would have serious international spillover effects.

First, higher US interest rates would quickly transmit into higher interest rates across the globe. Among the major central banks, the Fed has been one of the most dovish – so for it to plead a mea culpa would be a powerful signal for its counterparts to also consider changing course. In addition, faster Fed rate hikes would likely translate into a stronger USD, adding to the upward pressure on inflation outside the US; some emerging market countries might need to hike rates to punitive levels to stem capital flight and currency depreciation.

And second, public and private debt loads, which were already high before the pandemic, have risen substantially, meaning that sharply higher interest rates would have a more detrimental impact on the global economy than before.

If the Fed is wrong on transitory inflation, it has no good policy choices. The alternative to catching up is, in the words of Professor Nouriel Roubini, to ‘wimp out’ and lag behind the curve.

In our view, the Fed being unwilling to fight persistent inflation is a very low probability, but a high-risk outcome, as it would shatter its hard-earned credibility. Nonetheless, it cannot be completely ruled out.

The Fed, caught in a debt trap, could struggle to raise rates over concerns of triggering a financial market crash that tips the economy back into recession. Alternatively, the Fed could succumb to fiscal dominance. With an eye on the mid-term elections, the government could pressure the Fed to accommodate inflation in order to sustain the expansion and reduce the real value of government debt.

As Professor John Cochrane recently reminded us, the last time the US government debt was 100% of GDP, at the end of World War II, the Fed was instructed to hold down interest costs on US debt. In this unlikely tail-risk event, the risk is full-blown stagflation with US long-term bond yields rising much higher and the yield curve steepening by the most in decades, as inflation expectations become fully de-anchored. America’s loss of policy credibility could cause the USD to start losing its reserve currency status.

If the Fed is wrong on transitory inflation, hold on to your seats as financial markets reprice the Fed’s conundrum of no easy policy options.

Let’s hope the Fed is right!