The changing dynamics of GVCs in Asia

East and Southeast Asia have been performing the role of ‘factory of the world’ for more than two decades. Will it continue to do so post-COVID?
11.05.2021
Unravel editorial team

A tractor factory in Iran. The impact of COVID-19 on GVCs is yet to be fully clear, but East and Southeast Asia are well positioned to recover. Photo by Amin Khorsand on Unsplash.

Global value chains (GVCs) have evolved rapidly over the past two decades, with implications on trade, investment and industrial development more broadly. A recent report by the Economic Research Institute for ASEAN and East Asia (ERIA) delves into how GVCs in the Asia-Pacific region are changing, particularly in light of the impacts of the coronavirus pandemic.

Even prior to the pandemic, numerous other trends were shaping GVCs in Asia. The region’s liberal stand on open trade and investment policies has contributed immensely to the growth of GVCs, for instance. Lower tariffs have also led to a positive increase in stronger GVC linkages.

Other than tariff reduction, factors such as favourable policies and business environments have helped the growth of GVCs in the region.

Vietnam is a good example. It was quick to recognise the potential of GVCs and engaged rapidly with a wide number of sectors – in the process reducing poverty and moving a significant part of its population to the middle class. 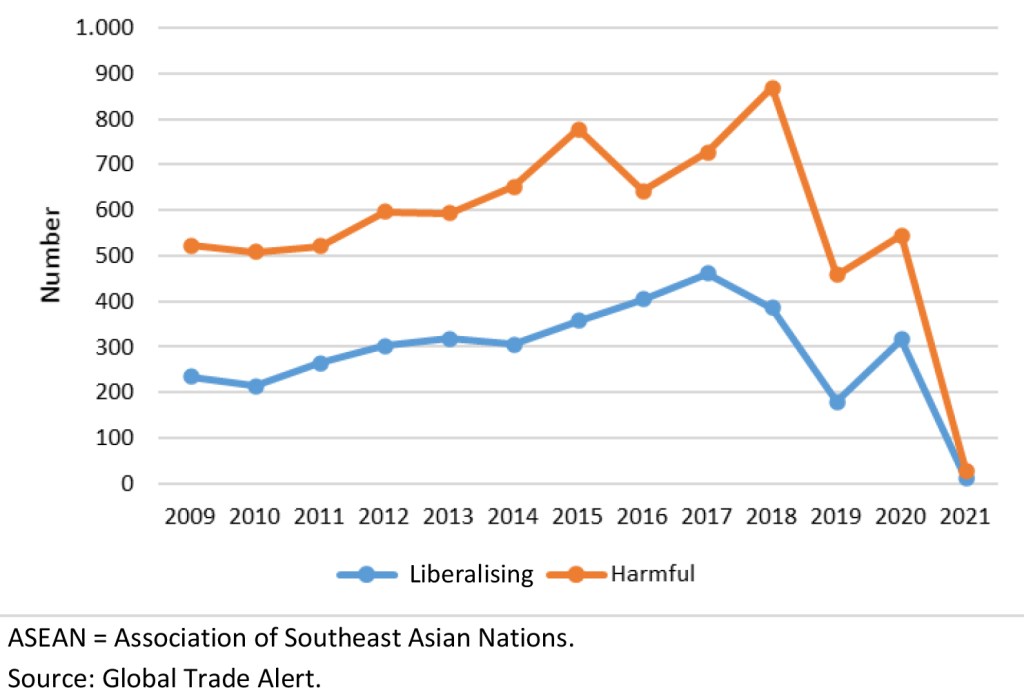 From a COVID-19 perspective, one of the effects on GVCs has stemmed from increased calls for reshoring—or simply put—the shortening of GVCs. This has been largely evident in critical medical supplies sectors such as PPE kits and face masks as country after country has looked to secure the supplies of these essentials for its people first. However, the report suggests “that using trade policy to promote reshoring may be both ineffective and highly inefficient.”

Meanwhile, the number of liberalising measures between 2009 and 2021 has been much lower than harmful ones in critical sectors in the region. GVC-reliant sectors such as motor vehicles, computers, electronics and pharmaceuticals are the most commonly targeted sectors by both types of measures.

These measures have also impacted FDI, which may lead to reduced production and overall risk to GVC development in the region. 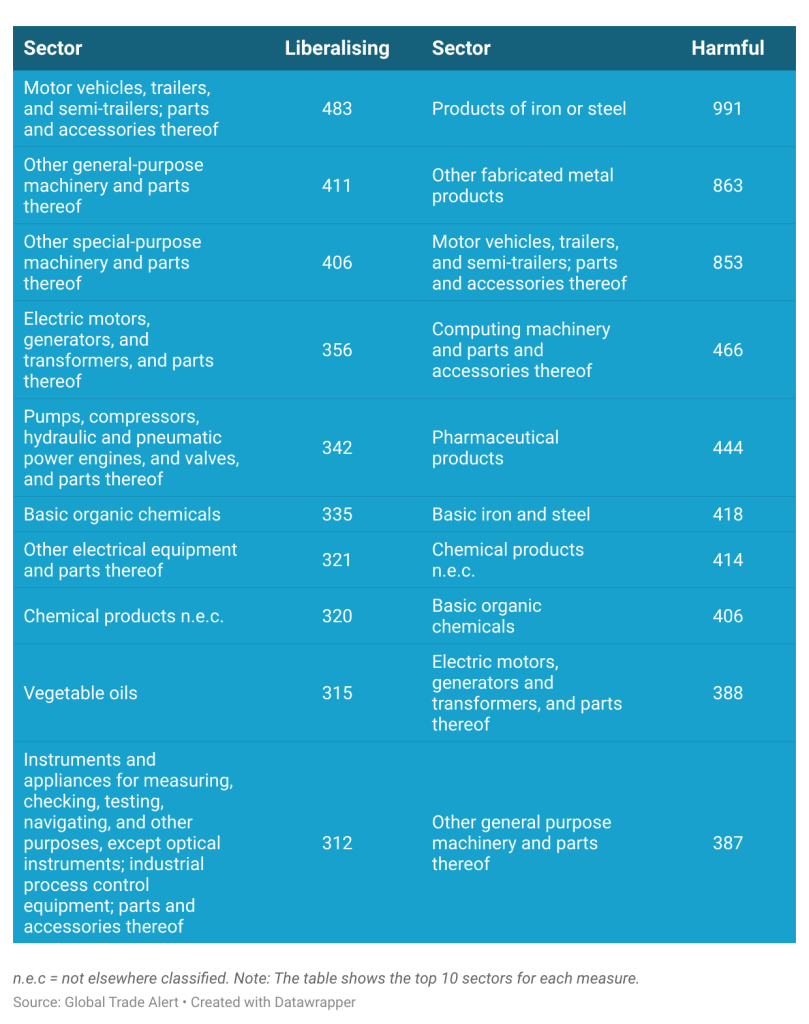 Owing to COVID-19, most of the region’s economies have faltered and there has been a drastic reduction in trade activity as the demand for most goods has fallen. Although East and Southeast Asia were very effective in managing the spread of the virus from a public health perspective, the region’s heavily export-oriented economies have faced reduced consumer demand from high-income countries, thus adversely impacting exports.

A firm-level survey in June 2020 shows how firms in the region witnessed a plunge of 40% in their monthly sales with the onset of the pandemic.

Support received from the government has differed across countries in the region, in terms of both type and extent. Firms in Indonesia, for example, have received the lowest level of policy support, with “no more than 15% of firms’ report having received a particular policy response”. Among the countries surveyed (Indonesia, Cambodia, Philippines and Vietnam), support mostly came in the form of tax reduction and exemptions, and very few on access to credit. Vietnam received the maximum support in terms of tax reduction or exemptions and payments deferrals.

The trend of subdued growth in production sharing (seen since 2009) has likely been further reinforced due to the pandemic. In 2020, FDI in developing Asia is also expected to decline by 45%. With trade and FDI—the two main drivers of GVC development—on a decline, GVC expansion in the short-term will be more muted as compared to “the ‘golden age’ of the early 2000s”.

Separately, another survey by ERIA found that around 43% of the 2,083 local and international firms surveyed in ASEAN and India have plans to change their production locations, indicating some form of reshoring or changes in GVCs. COVID-19 was cited as a “greater motivator of changes in the location of production than the US-China trade tensions”. The good news is that 46% of the surveyed firms have no plans to change their production locations.

The region must overcome some barriers caused by the lack of policy measures that failed to support the growth of trade and to address the credit woes faced by numerous firms amid the crisis. Souring geopolitical relationships, and misguided economic decisions, are leading to the implementation of harmful anti-trade measures that in the long-term can further derail GVC developments in the region.

In the medium-term, the development of shorter value chains, in addition to a push towards production-sharing will be vital in the region’s economic recovery. The ongoing push towards a digital economy and eco-friendly products is likely to benefit GVCs in the future. “Provided that markets remain relatively open, East and Southeast Asia is well positioned to take advantage of these opportunities, given its established base in related sectors, such as electronics and motor vehicles,” according to the report. Open markets, an effective supply chain network and integrated GVCs will continue to be key aspects of the region’s economic development in the years to come.