One of the most famous stats in the climate debate is the 97% of scientists who endorse the consensus on human-induced global heating. Ahead of the Glasgow summit, that figure has climbed even higher
02.11.2021
Steve TurtonAdjunct Professor of Environmental Geography at CQUniversity Australia

But this denialism is now almost nonexistent among climate scientists, as a study released this month confirms. US researchers examined the peer-reviewed literature and found more than 99% of climate scientists now endorse the evidence for human-induced climate change.

That’s even higher than the 97% reported by an influential 2013 study, which has become a widely cited statistic by both climate change deniers and those who accept the evidence.

Why has the needle evidently shifted even more firmly in favour of the evidence-based consensus? Or, to put it another way, what happened to the 3% of researchers who rejected the consensus of human caused climate change? Is this change purely because of the growing weight of evidence published over the past few years?

We must first ask whether the two studies are directly comparable. The answer is yes. The latest study has reexamined the literature published since 2012, and is based on the same methods as the 2013 study, albeit with some important refinements.

Both studies searched the Web of Science database – an independent worldwide repository of scientific paper citations – using the keywords “global climate change” and “global warming”. However, the recent study added “climate change” to the other two keyword searches, because the authors found that most climate-contrarian papers would not have been returned with only the two original terms.

The 2013 study examined 11,944 climate research papers and found almost one-third of them expressed a position on the cause of global warming. Of these 4,014 papers, 97% endorsed the consensus position that humans are the cause, 1% were uncertain, and 2% explicitly rejected it.

A 2015 review examined 38 climate-contrarian papers published over the preceding decade, and identified a range of methodological flaws and sources of bias.

One of the reviewers commented that “every single one of those analyses had an error – in their assumptions, methodology, or analysis – that, when corrected, brought their results into line with the scientific consensus”.

For example, many of the contrarian papers had “cherrypicked” results that supported their conclusion, while ignoring important context and other data sources that contradicted it. Some of them simply ignored fundamental physics.

The 2015 reviewers also made the important point that “science is never settled and that both mainstream and contrarian papers must be subjected to sustained scrutiny”. This is the cornerstone of the scientific method, and few if any climate scientists would disagree with this statement.

Separating the human influence from the natural

The recently published Intergovernmental Panel for Climate Change (IPCC) Synthesis Report, says “it is unequivocal that human influence has warmed the atmosphere, ocean and land”, and warns that the Paris Agreement goals of 1.5℃ and 2℃ above pre-industrial levels will be exceeded during this century without dramatic emissions reductions.

In reaching this conclusion, it is important to distinguish between changes caused by human activities altering the atmosphere’s chemistry, and climate variability caused by natural factors.

These natural variations include small changes in the Sun’s energy output due to sunspots and solar flares, infrequent volcanic eruptions, and the effects of El Niño weather patterns in the Pacific Ocean. 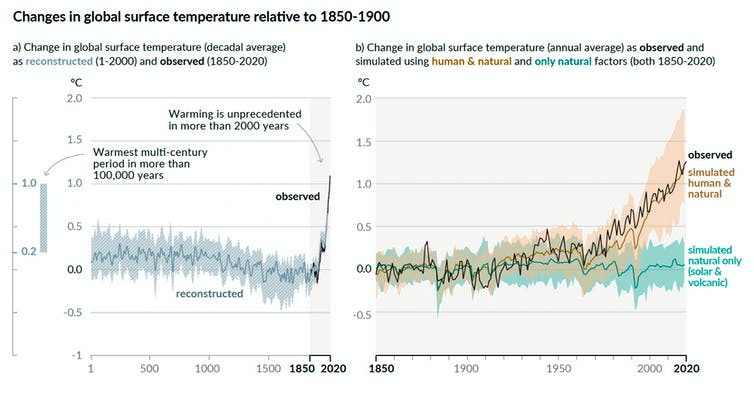 Excluding these natural variations, Earth’s surface temperature was generally stable from about 2,000 to 1,000 years ago. After that, the planet cooled by about 0.3℃ over several centuries, before the advent of fossil fuel-based industrialisation in the 1800s.

One study identified 12 major volcanic eruptions from 100 to 1200 CE, compared with 17 eruptions from 1200 to 1900 CE. Hence, heightened volcanic activity over roughly the past 800 years was associated with a general global cooling before the industrial revolution.

Current rates of global warming are unprecedented in more than 2,000 years and temperatures now exceed the warmest (multi-century) period in more than 100,000 years. Global average surface temperature for the decade from 2011-20 was about 1.1℃ higher than in 1850-1900. Each of the past four decades has been warmer than any preceding decade since 1850, when reliable weather observations began.

If human factors are removed from the data set and only volcanic and solar factors are included, then global average surface temperatures since 1950 should have remained similar to those over the preceding 100 years. But of course they haven’t.

The evidence, and the scientific consensus on it, are both clearer than ever. 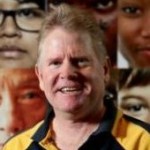 Steve is an adjunct professor of environmental geography at Central Queensland University, based on the Sunshine Coast, Queensland. From 2006-2016, he held a number of senior roles as professor and director at James Cook University. From 2003-2005, he was an associate professor in geography and director of research for the Rainforest Cooperative Research Centre. Steve is a former councillor of the Institute of Australian Geographers (2004-2007 and 2011-2012) and former member of the Wet Tropics Management Authority’s Scientific Advisory Committee (2004-2011). In 2016, he was made a distinguished fellow of the Institute of Australian Geographers, recognised for his distinguished service to Australian geography. Steve was the 2017 recipient of the Royal Geographical Society of Queensland’s J.P. Thomson Medal, recognising his outstanding contributions to geography over an extended period of time.