Tech and agriculture must combine to deliver sustainable food systems
05.10.2021
An interview with
Elizabeth HernandezHead of External Affairs and Sustainability, Asia Pacific at Corteva Agriscience

In the first part of this interview, we discussed how food systems can be made more resilient and productive, and the impact of climate change on agriculture in Asia. In this second part of the conversation, we speak with Elizabeth Hernandez, head of external affairs and sustainability, Asia Pacific at Corteva Agriscience, on growing awareness about food sustainability, smallholder farmers in the region, food waste and the future of agriculture.

Unravel: The farm to fork journey entails several stakeholders. In the food sustainability journey, is there buy-in from consumers?

Ms Elizabeth Hernandez: Before this pandemic, consumer awareness was probably the biggest challenge in the food sustainability journey. There was a lot of focus on farmers and the changes they need to make in food production, but no one was really focusing on consumers. A big part of production is driven by consumer demand – what are we each looking for when we go to the grocery store? We’re not necessarily thinking about the farmer and how our food was produced. We look at affordability, safety and whether it looks good.

Once the pandemic started and consumers faced food shortages, that’s when consumers started to realise the complicated reality of our food systems – and the fault lines along the supply chain became clear. Agriculture and food production today has become important not just for farmers but also for consumers. I believe this pandemic has helped many recognise the critical importance of the sustainability of our food system.

The food supply chain is flipping, and consumers play a key role. Everybody talks about farm to table, but as a company, we want to focus on the new emerging consumer. A consumer who is informed and empowered, knows exactly what they want to eat and how they want their food grown. Consumer preferences will impact the future of farming and drive the sustainability of our food system.

In short, I think before the pandemic, most of us were disconnected with our food. Now, everybody’s talking about the food system and sustainability. Most importantly, consumers are beginning to make choices that could impact the sustainability of our food system.

Unravel: Please tell us about smallholder farmers in the region. Some countries that are doing it right and what others can learn from them.

Ms Hernandez: Most farmers in Asia-Pacific are smallholder farmers who own less than two hectares of land. To achieve sustainable food production, they need technologies and practices that allow them to produce more food with less resources.

Let me give you a hybrid corn example from Indonesia, where agriculture contributes 29% of the workforce and 13% of its GDP. East Java is a major producer of corn, and accounts for about 30% of the country’s corn crop. But if you look a little bit north of mainland East Java, there is an island called Madura. This island was a bit isolated, and farmers there did not have access to the same technology and training as other parts of East Java. There are local varieties of corn, and then hybrid corn, which gives higher yields. In East Java, nearly 90% of farmers had adopted hybrid corn, while in Madura, it was just 10% hybrid. As a result, in East Java, they might get an average yield of 5 metric tonnes per hectare, while in Madura, they averaged only 1.7 metric tonnes per hectare.

Corteva worked with PRISMA, an NGO supported by both the Indonesian and Australian governments, to introduce hybrid corn technology to Madura farmers. Together, we provided demonstrations and training to over 40,000 farmers, and nearly half of them adopted hybrid corn. In the two-year period of the programme, these farmers were able to increase their yields by an average of 130% and their incomes by an average of 247%. About 36% of these farmers were women, who are critical decision-makers when it comes to investing in their family farms.

On our own, it would have been a slow process. But PRISMA took a value chain approach and secured off-takers (the feed mills) to buy the corn. Once they had access to this market, they went to financial companies such as Bank Negara Indonesia to provide loans to the farmers so they could purchase the hybrid seeds. Then we jointly provided demonstrations and capacity-building. This partnership has worked well, so we’re replicating similar efforts in other parts of Asia-Pacific. That is the kind of impact we can make in our communities, but you must look at the entire ecosystem: access to technology and training, access to finance and access to markets.

Unravel: Apart from the increased production and receiving higher incomes, would you say it positively impacted the environment as well?

Ms Hernandez: Yes, it definitely impacted the environment. Higher yields mean more food within the same land and with fewer resources like fertilisers. When you are not getting sufficient yield, you end up adding more fertiliser or having to clear more land to farm more, and that is not what we want to do. Hybrid seeds are bred to be more productive and more resilient to extreme weather or to pests, so farmers also save on ag inputs. In order to be more sustainable, increasing food production while using fewer resources overall is key.

That’s the whole essence of sustainability, right? We still must produce more food to meet our growing global population—60-70% more by 2050, according to the FAO—but at the same time, we need to preserve the planet’s resources for future generations.

Ms Hernandez: It’s not just the size of the farm, as much as scaling these technologies to reach hundreds of millions of smallholder farmers that is challenging. However, I see some welcome trends.

In India, we’re seeing the formation of stronger farmer producer organisation (FPOs). FPOs allows farmers to band together and help each other to produce a common crop, and bring the capacity building, share the technology, or the mechanisation that is needed to be able to do that. So even though they might have smaller farms, they’re able to leverage each other through collaboration. For example, we worked with PRADAN, an NGO, to teach mechanisation to a newly established FPO of women corn farmers in Madhya Pradesh. We were very pleased to see this FPO win an impact award in 2020.

In China, I’ve also seen a group of neighbouring potato farmers that rented a drone operator to come and spray a fungicide across all their farms. I think there were six farms adjacent to each other. And the drone operator was done in 15-20 minutes – something that might have taken them four hours and cost them a lot more on their own. They were able to save on water, labour and crop protection solutions, which is also healthier for their farm. That’s the kind of collaboration I see. Even with small farms, there are ways of addressing some of the challenges.

With digital technologies, I see a future where precision agriculture becomes much more accessible and available to smallholder farmers, perhaps through a shared economy or Uber model. That’s the kind of innovation I’d love to see from startups. I hope that more and more investors support startups that address access to solutions for smallholder farmers, not just to those developing new technologies.

Unravel: What about food waste?

Ms Hernandez: From a global perspective, we do need to address food waste. Roughly one-third of the food produced in the world for human consumption every year—approximately 1.3 billion tonnes—gets lost or wasted, according to the UN. In Asia, there are even higher estimates. Besides addressing food waste at the household level by raising consumer awareness, one key aspect is the lack of investment in post-harvest infrastructure to support the journey of our food from farms in the rural areas to markets in the city centres. This is particularly challenging for fruits and vegetable producers that may not have cold storage facilities for their produce. This is an area where governments can do more to support our farmers and contribute to the sustainability of our food systems.

Unravel: What do you think the future holds for agriculture?

Ms Hernandez: Agriculture is at an important inflection point. I believe there is a growing consensus for a new, inclusive definition of sustainable food production. Both farmers and consumers are ready to invest in sustainable food and in the new technology innovations to produce more food with less resources.

The future of farming starts with seeds, bred to be resilient and productive. New targeted breeding technologies like CRISPR can also help farmers mitigate the impact of climate change while meeting the changing demands of consumers.

With new tools and digital technologies, farmers can do more than respond to climate change. They can anticipate it. With precision agriculture, we will be able to treat that precise plant that might have an issue, whether it’s a pest or a disease. Drone and satellite imagery today are so sophisticated, you can pinpoint or anticipate the problem before it happens or before a pest or disease takes over your entire crop. And when we can overlay different types of data—weather, yield, water, soil health—farmers will be able to make smarter decisions. As someone who spent more than a decade in the technology industry, that’s the future of agriculture that excites me and keeps me hopeful about the sustainability of our food system.

* The first part of the interview can be read here. 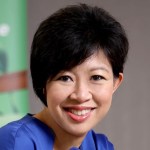 Elizabeth Hernandez leads Corteva Agriscience’s external engagement strategy in Asia Pacific. She advances the company’s brand and reputation, develops strategic relationships with governments and other stakeholders across the food and agriculture ecosystem, and manages Corteva’s sustainability initiatives in Asia Pacific. Elizabeth has over 25 years of experience in Asia, mostly with multinationals, including GlaxoSmithKline, Hewlett-Packard, Facebook and DuPont (now Corteva Agriscience). Elizabeth served two terms on the Board of Governors for the American Chamber of Commerce in Singapore. She currently serves on the boards of WOMAG (Women in Agribusiness) and Digital Impact Alliance (DIAL), a global partnership for digital inclusion funded by the UN Foundation and the Gates Foundation, among others. She is also a founding member of KeyNote Women Speakers, a global platform that advocates for gender diversity on the world’s stages.