Southeast Asia must transition to renewable energy quickly to secure its energy future. Photo by Zbynek Burival on Unsplash.

Addressing this challenge will require multi-pronged solutions including greater energy efficiency, a push for more renewable power generation and a switch to low emissions fuels.

Over the past two decades, primary energy demand in the region has increased on average by around 3% year-on-year; with the majority of that mix coming from oil and coal.

Exhibit 1: Oil and coal make up the largest share in the energy mix

The majority of the energy demand in the region is driven by Indonesia and Thailand. Industry and transport sectors are the two main industries that have led the growth in final energy consumption in the region. 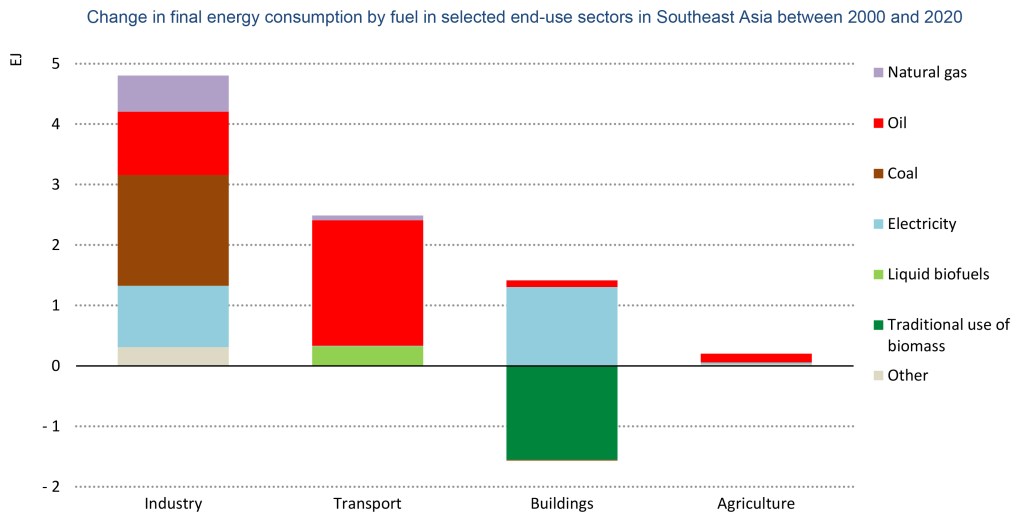 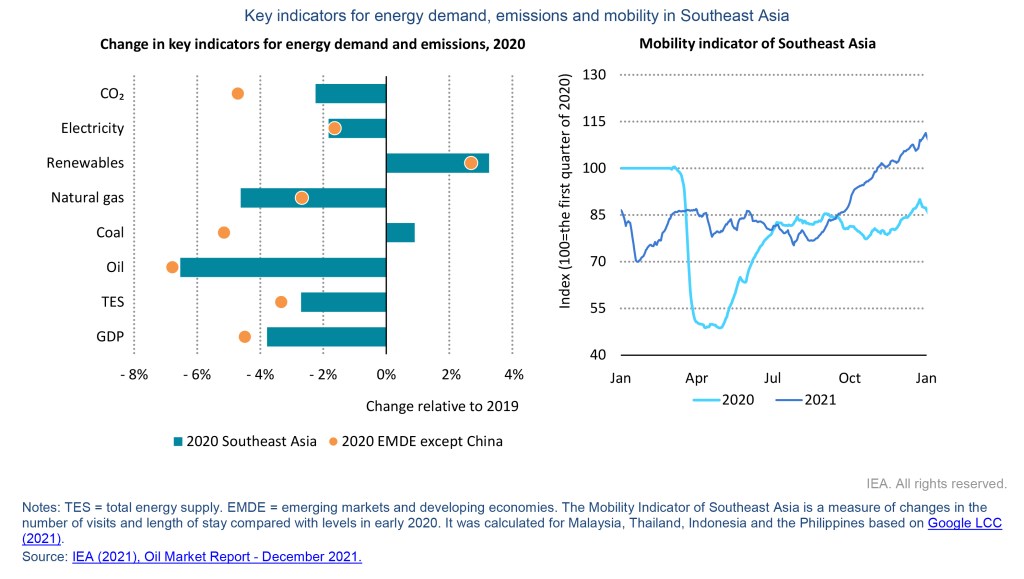 The falling demand for fossil fuel was very much an outcome of reduced mobility in the region due to lockdowns, social distancing measures and border closures.

The impacts of COVID-19 notwithstanding, the region will see demand for energy continue to rise as populations and their spending power both increase. Energy demand is expected to continue growing in Southeast Asia. In STEPS (Stated Policies Scenario)— which reflects the countries’ current policy settings based on a sector-by-sector assessment of the specific policies that are in place or have been announced—energy supplies will increase significantly, along with the use of fossil fuels, leading to high CO2 emissions.

However, in the Sustainable Development Scenario (SDS), renewables will dictate the energy mix; and there will be significant reduction in emissions.

Exhibit 4: SDS outlook is better in the long run 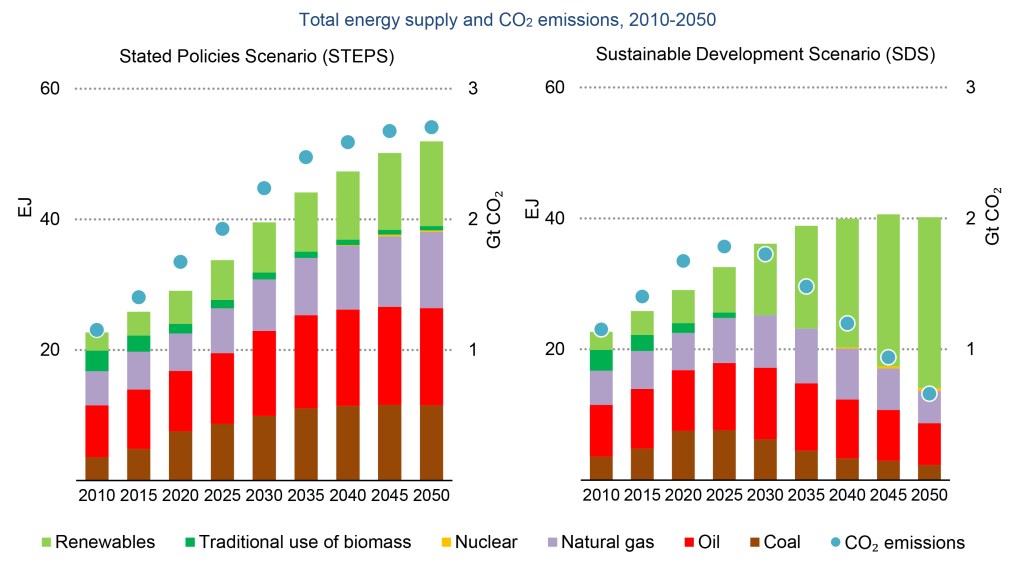 In the STEPS scenario, Southeast Asia’s demand for fossil fuels such as oil and natural gas will increase significantly; which stands to greatly threaten its energy security. This is very much a reality now given the Russia-Ukraine conflict. 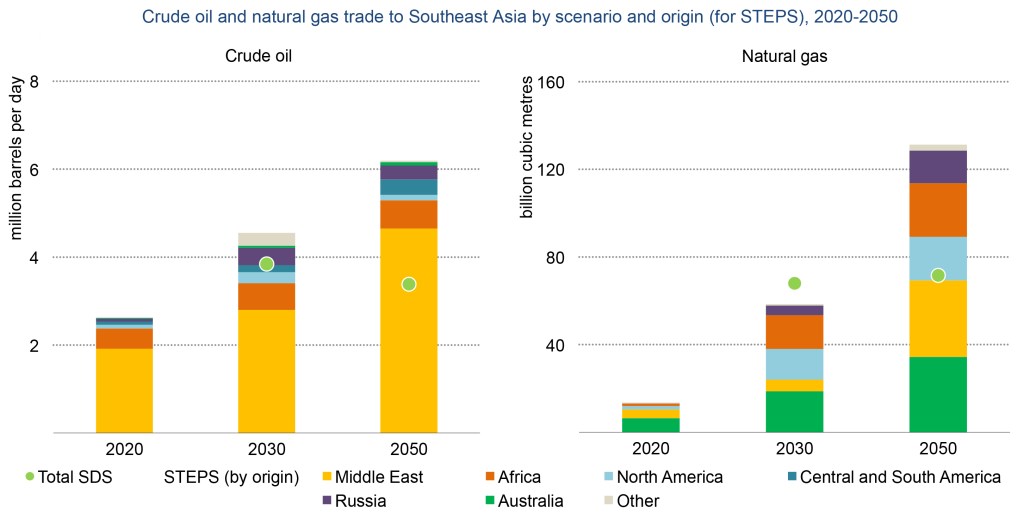 The region will face huge payments issues due to rising fossil fuel imports, led mainly by oil. In the STEPS scenario, it increases significantly.

“Southeast Asia is an emerging heavyweight of global energy, and the speed of its economic development makes it even more essential that the region’s governments hasten efforts to transition to sustainable energy and that they get the international support they need to do so,” IEA Executive Director Fatih Birol said in a statement.

Multiple benefits of a renewables transition

A shift to renewables or sustainable energy will cut fossil fuel consumption and imports (thereby aiding energy security), and will also result in a reduction in CO2 emissions.

A clear indicator is the reduction of CO2 emissions in the presence of an SDS scenario in comparison to a business-as-usual scenario. Much more will be needed to ensure the region can contribute what is needed to ensure global temperature is maintained below 1.5°C. 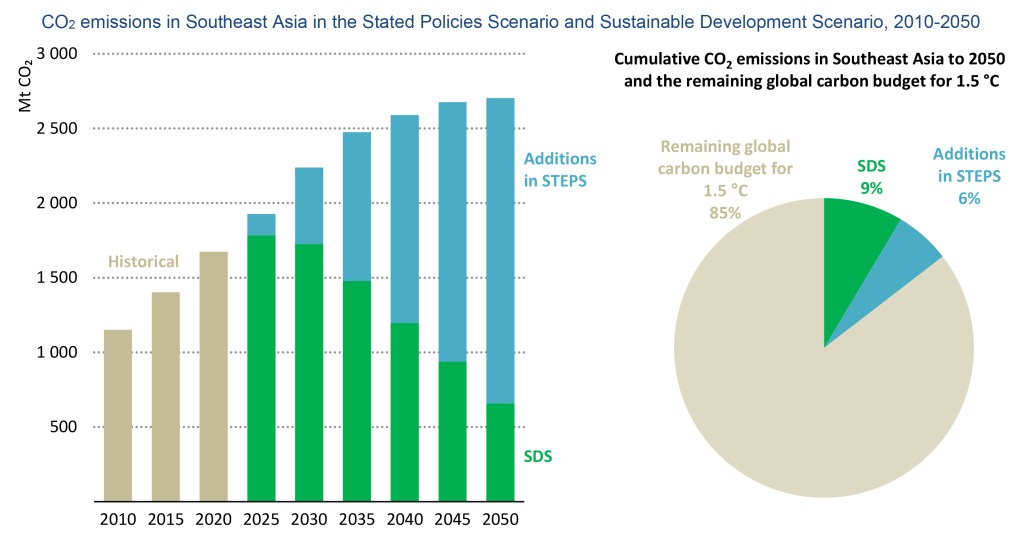 Reduction in use of fossil fuel will also lead to cleaner air, which attaches itself well with the socioeconomic benefits that will entail for the region.

Exhibit 8: SDS scenario a no-brainer when it comes to good air quality 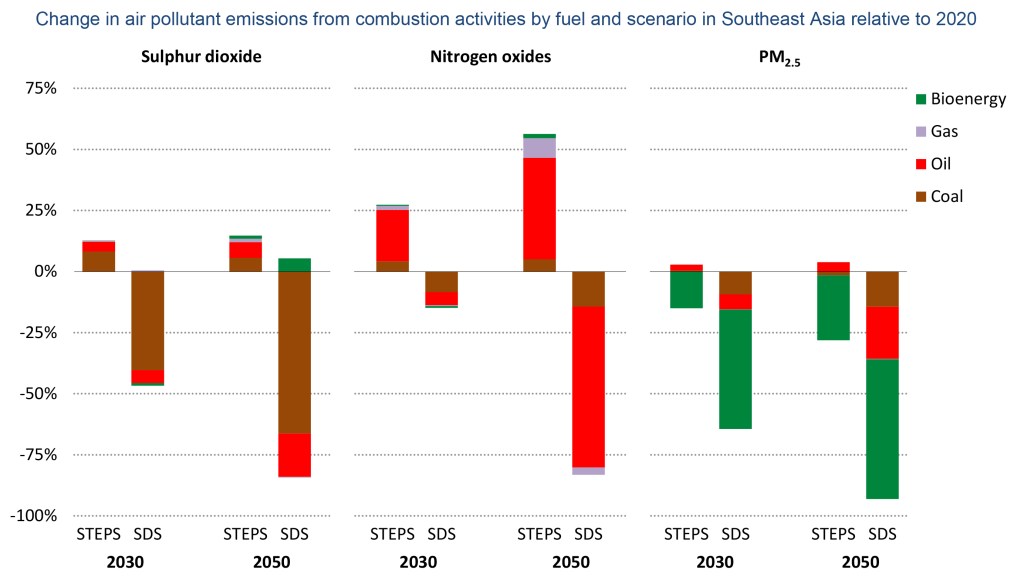 Moreover, it will also result in strides being taken towards ensuring universal access to electricity and clean cooking across the region.

Change in the air

This reality is not lost on governments in Southeast Asia, many of which have announced ambitious targets to limit the use of fossil fuels and to reach carbon neutrality. For example, Indonesia has announced that it will increase new and renewable energy share to 23% in 2025 and 31% in 2050; while cutting its emissions by 41% by 2030.

However, meeting these targets is going to be challenging. Renewable power generation has to be substantially increased across the region, which requires capital, technical expertise and improved infrastructure such as better grids.

A total energy investment of $190 billion a year by 2030 will be required to meet the announced climate goals, which is almost double of what the region has invested per year between 2016 and 2020.

Exhibit 9: Much needed in terms of clean energy investments in Southeast Asia

According to the IEA, financing from international agencies is important, but so is private finance. To attract private finance, the region’s governments must endeavour to reduce the costs of financing and signal a clear commitment to changing the energy mix by implementing better regulatory and financing frameworks.

An important cog in the global fight for sustainability

Home to more than 650 million people, Southeast Asia is going to be a key mover on the path to more sustainable energy production and consumption globally.

Additionally, accelerating the transition to clean energy will open up huge market opportunities for cleantech.

Exhibit 10: Cleantech poised for growth in the region under SDS scenario 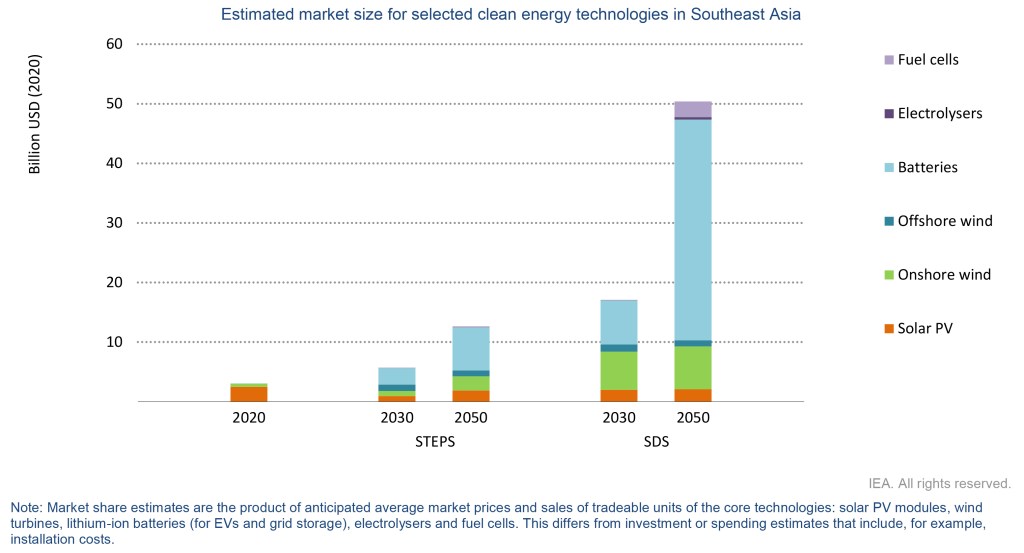