Singapore’s economy is poised for a robotics dividend

Singapore has shown an increase in total factor productivity in recent years. This productivity trend is positively correlated with the growth in its robot installations. Photo by Siddharth Poddar.

Singapore is uniquely placed to see a robotics-led productivity boost, but low- to medium-skilled workers in service sector jobs are vulnerable to automation as robotic capabilities expand

Singapore is well-placed to benefit from a robotics dividend given the structure of its manufacturing industry, its highly skilled labour force and conducive government policy.

The Oxford Economics Global Economic Model shows the rate of robotisation can have a substantial impact on GDP. Between the model’s fast and slow scenarios for robot adoption, we estimate around a 20% difference in Singapore’s GDP by 2030, which is equivalent to around S$100 billion ($71.8 billion) in today’s prices.

However, automation in services is the new frontier and will present a challenge to policymakers, as greater automation delivers productivity gains but makes the large low- and mid-skilled service-sector workforce vulnerable to displacement.

Given its ageing population, Singapore depends on constant productivity gains to generate long-term GDP growth. The government set an ambitious target in 2010 to expand productivity by 2%-3% per year for the next 10 years. While falling short of the target, Singapore has nevertheless shown an increase in total factor productivity in recent years. This productivity trend is positively correlated with the growth in its robot installations.

Our recent multi-country study How Robots Change the World found that robotic automation in manufacturing leads to significant productivity gains, not only in the manufacturing sector, but also in the wider economy through positive income effects.

Despite Singapore’s relatively small global market share, robots feature prominently in its industry. The stock of robots increased rapidly after the Global Financial Crisis, growing at an average rate of 20% per year from 2010 to 2016. According to a 2019 report by the International Federation of Robotics, Singapore had the highest robot density in the world (number of robots per 10,000 workers) for the first time in 2018.

Figure 1: Singapore was the world’s most robot-dense economy in 2018 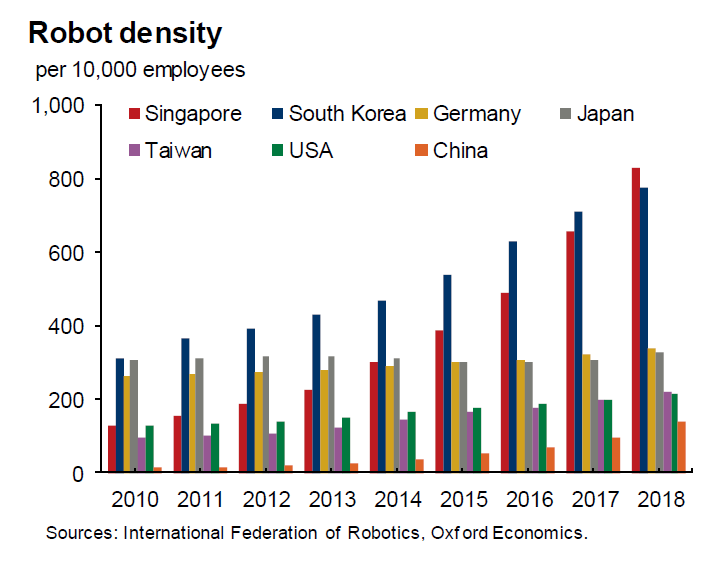 This is largely because of the structure of Singapore’s manufacturing sector, which lends itself to robotic innovation. The electrical industry—comprising electronic components manufacturing, medical equipment, precision and optical instruments—represents more than 60% of Singaporean industrial production. Mirroring this structure, about 84% of the robots in Singapore are installed in the electrical industry.

Even globally, the electrical sector has seen the most accelerated rise in robotic applications in recent years. This trend is fuelled by the growing demand for electronic products, price competition and the increasing need for batteries, chips and displays in a wider variety of products. Robotic installations in Singapore are skewed towards the manufacturing of semiconductors and computer peripherals, but recent innovations mean they are increasingly diversifying into sectors such as warehousing and logistics.

Singaporean workers more shielded from robotisation than most others

Our multi-country study found that the economic benefits of robotisation are not evenly distributed. The burdens of job displacement fall disproportionately on poorer populations, with each additional robot displacing twice as many workers in lower skilled regions than in higher skilled regions of the same country. This has important social and political implications for many major economies in times of growing economic inequality and political polarisation—increasing unemployment can contribute to a volatile cocktail of destabilising factors.

However, Singapore’s labour market structure is such that the country is relatively well-placed to manage such pressures. Most importantly, Singapore’s resident workforce is highly skilled, which means it performs functions that are more difficult to automate and more likely to be complemented by new technology, rather than be displaced. In fact, more than 60% of workers in Singapore’s manufacturing sector are classified as highly skilled; and it is a share that continues to grow (Figure 2).

Figure 2: The number of high-skilled workers has been rising among the local manufacturing workforce in Singapore 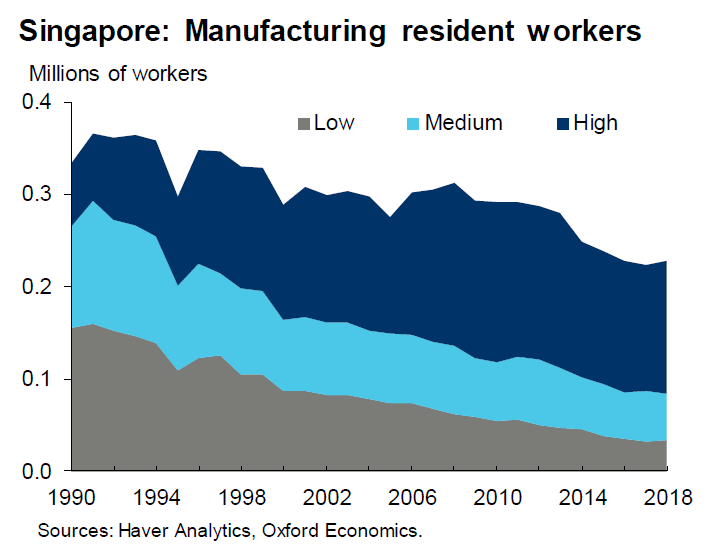 Another unique feature of the Singapore labour market is the large, non-permanent foreign workforce, which is heavily employed in occupations that are vulnerable to future automation. About 70% of the country’s 1.4 million foreign workers hold a ‘work permit’ visa, suggesting employment in labour-intensive occupations with lower wages. Should the government face domestic pressure to further tighten foreign worker quotas, robots could fill the void in several areas.

Singapore’s government has been actively pursuing the vision of ‘Smart Nation 2020’ via three channels: promoting academic research in advanced technology, providing financial support to encourage companies to adopt technology, and raising the labour force skill level. This has led to Singapore ranking high in various measures of innovation and global competitiveness.

Indeed, the government’s prioritisation of innovation and technology has boosted robot investment. The National Robotics Programme, with an investment of S$450 million, was launched in 2016 with the goal of developing robotics technologies in the healthcare, construction, manufacturing and logistics sectors. Additionally, ongoing incentive programmes, such as the Automation Support Package, provide incentives for firms to adopt off-the-shelf technologies and are positive for the continued growth of robot stock.

The rate of robotisation and automation that occurs in Singapore over the next decade will have material implications for GDP growth. It is our estimate that there will be around a 20% difference in Singapore’s GDP by 2030, under high- and low-robotisation scenarios. This is equivalent to about a S$100 billion difference in today’s prices. The scenarios were based on historical periods of growth in Singapore’s operational stock of robots (with data from the International Federation of Robotics).

In the high scenario, we assumed that the robot stock will grow 44% above our baseline projection, continuing to accelerate at the rate achieved since the Global Financial Crisis. In the low scenario, we assumed it will slow 33% below the baseline projection, returning to a historical trend in keeping with the decade before the Global Financial Crisis. (These figures were calibrated against historical growth levels for robot stock, density and depreciation rate).

Many workers in Singapore will need to retrain and learn new skills to take advantage of the new opportunities that a more automated service economy will present.

The productivity payoffs from accelerated automation present an opportunity for Singaporean policymakers, but the next decade also comes with risks. At the frontier of robotics innovation, new applications are rolling out in the service economy, such as baggage handling at airports, inventory management in warehouses and room service in hotels. With close to 85% of Singaporean workers employed in service roles, technology is already beginning to compete with a larger share of jobs than ever before.

The number of Singaporean resident workers employed in low- to medium-skilled service sector jobs has not decreased over the years (Figure 3), and these are the workers increasingly vulnerable to automation as robotic capabilities expand. Small and midsized enterprises and the large retail and food and beverage sectors could be particularly vulnerable.

Figure 3: In the service sector, low- and medium-skilled workers still account for more than 800,000 jobs 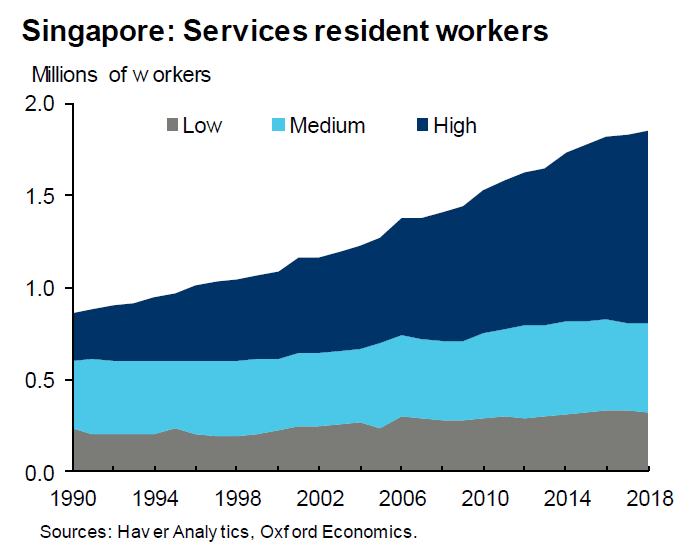 Many workers in Singapore will need to retrain and learn new skills to take advantage of the new opportunities that a more automated service economy will present. If automation is to be pursued at pace, this cohort will need continued government support to ease the transition. By helping the workforce upgrade its skills, more workers will be able to secure jobs that can coexist with robots, rather than be replaced. In this way, the government could enjoy the productivity boost coming from robots while dampening the negative impact of job displacement. 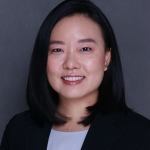 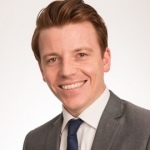 James is Oxford Economics’ Director of Economic Impact Consulting for Asia. Before moving to Singapore in 2019, he headed a team in London focused on the economic impact of technology and the digital economy. James previously worked in the UK Government Economic Service, in the Foreign and Commonwealth Office and Cabinet Office, and prior to that at the International Labour Organization.