Home Economy, Policy & Business RCEP was launched with high hopes. Here is how we can achieve them

We need to work across borders to ensure that the benefits of the Regional Comprehensive Economic Partnership are enjoyed by everyone
29.11.2022
Sanchita Basu-DasEconomist, Economic Research and Regional Cooperation Department at the Asian Development Bank

After a decade in the making, the RCEP needs the right policies to become more effective. Photo by CHUTTERSNAP on Unsplash.

The Regional Comprehensive Economic Partnership (RCEP) – a massive trade deal involving Southeast Asian nations and Australia, the People’s Republic of China, Japan, the Republic of Korea, and New Zealand – is celebrating 10 years since it was first conceived in 2012. It came into effect in January 2022 with the potential to strengthen supply chains, increase incomes and generate millions of jobs.

However, actions to unleash its potential have yet to pick up pace. This is because the RCEP members were hit badly by the COVID-19 pandemic soon after the completion of negotiation in late-2019. As the countries are now emerging from their economic lows, the benefits of RCEP are needed more than ever. With national level ratification completed for most of the countries, attention shifts towards implementation and the way forward.

Indeed, success of RCEP lies in effective implementation, while being mindful about the new developments of ‘build forward better and greener’. There are lessons that can be drawn from previous experience of implementing regional cooperation measures, such as the ASEAN Economic Community (AEC) that involves all ASEAN members. The following implementation guidelines are thus suggested for RCEP countries consideration:

First, countries need to map their regional commitments under RCEP to national policies and institutions. Reflecting upon the past, for example in the establishment of National Single Window (NSW) – a commitment made under AEC to streamline customs procedure and use digital tools to expedite clearance of goods, it was felt that traditional policy planning and implementing bodies within a government may find it difficult to cope. A new mechanism was required that goes beyond the host agency duties and involves greater coordination among multiple ministries and agencies. An explicit body was thus created under customs agency to implement NSW in ASEAN countries to enable alignment of government bodies as demanded by the policy change. Similar exercise of policy and institutional planning is required to translate RCEP’s regional commitments to national actions.

Second, it is important to create a support base for any new policy initiative. This becomes crucial for a regional agenda like RCEP as the benefits from all policy commitments are not immediately obvious. Repeated consultation is important among all government implementing agencies. Many times, during AEC implementation, it was felt that although the operational team of an implementing agency have learnt about the technical aspect of a policy action, they were not aware of AEC – the overarching regional policy. The absence of an overall vision gets reflected in lack of drive to deliver on commitments by the stipulated timeline. RCEP countries need to be mindful of the risk from ‘loss of purpose’ during implementation of provisions and hence should regularly hold dialogues with operational teams at the national level.

Third, coordinating with businesses regarding RCEP remains crucial to overcome the issue of low utilisation of regional trade agreements in the region. It is important to identify champions in industry who can help map industry supply chains to understand trade scenarios and the ways RCEP may help them further.  Small enterprises will need further assistance with access to information. Along this line, ASEAN plans to strengthen its existing digital platform, ASEAN tariff finder, to help businesses access information regarding tariffs and non-tariff measures in various free trade agreements. Member countries should also consider having their own advisory groups, either physical or virtual, to share information.

While implementation at national level becomes a priority for RCEP economies, they should not lose sight of the future needs that are evolving with the changing global context.

Fourth, RCEP governments have promised to set up a secretariat to closely monitor and evaluate the implementation of the agreement. The discussion of the host country for such secretariat is still ongoing but needs to be resolved with a sense of urgency. Meanwhile, it has been decided that for now, the ASEAN Secretariat in Indonesia will establish a separate unit to commence the process of monitoring.

Finally, while implementation at national level becomes a priority for RCEP economies, they should not lose sight of the future needs that are evolving with the changing global context. During the course of development of RCEP since 2012, new areas of policy focus have emerged, including digital economy and sustainability. While RCEP touches upon digitalisation, more needs to be done to maintain the pace with other regional digital agreements, such as the Digital Economy Agreement, and the upcoming discussion on ASEAN Digital Economy Framework Agreement.

RCEP should also explore ways to embed climate mitigation and adaptation mechanisms as its forward-looking agenda. A section on environment should be included to support the Paris Agreement and countries’ commitment to meet net zero. It should promote trade and investment in low carbon goods and encourage technology-driven investments that support low carbon emissions.

RCEP was concluded after 31 rounds of negotiations with the expectation that its implementation will improve economic growth and trade in the region. The current economic climate with high inflation globally and continuing supply side problems give a lot more urgency to the agreement. We need to overcome localised reluctance and work across borders to ensure that the benefits of this ground-breaking agreement are enjoyed by everyone. 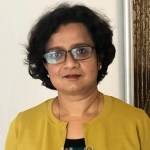 Sanchita joined ADB in November 2018 and initially served as an Economist in the South Asia Regional Department. She was previously the Lead Researcher for Economic Affairs at the ASEAN Studies Centre of ISEAS-Yusof Ishak Institute, Singapore. She was concurrently a Fellow of the Regional Economic Studies Program, coordinator of Singapore APEC Studies Centre and a co-editor of Journal of Southeast Asian Economies (JSEAE), all housed under the same institute. Sanchita contributes to the Division’s flagship publications, knowledge products and analytical studies. Her core research interests include regional cooperation initiatives and issues related to them, such as trade, logistics, industrial corridors, tourism, digital economy, institutions and others. She has published in international journals including the Singapore Economic Review, Journal of World Trade and Asia Pacific Economic Literature and also authored/ edited books and book chapters, as well as regularly written for media.