Central bank digital currencies and privately-issued money can coexist and complement each other. Photo by Shutterstock.

We value innovation and diversity – including in money. In the same day, we might pay by swiping a card, waving a phone, or clicking a mouse. Or we might hand over notes and coins, though in many countries increasingly less often.

Today’s world is characterised by a dual monetary system, involving privately-issued money—by banks of all types, telecom companies, or specialised payment providers—built upon a foundation of publicly-issued money by central banks. While not perfect, this system offers significant advantages, including: innovation and product diversity, mostly provided by the private sector, and stability and efficiency, ensured by the public sector.

These objectives—innovation and diversity on the one hand, and stability and efficiency on the other—are related. More of one usually means less of the other. A trade off exists, and countries—central banks especially—have to navigate it. How much of the private sector to rely upon, versus how much to innovate themselves? Much depends on preferences, available technology and the efficiency of regulation.

So it is natural, when a new technology emerges, to ask how today’s dual monetary system will evolve. If digitalised cash—called central bank digital currency—does emerge, will it displace privately-issued money, or allow it to flourish? The first is always possible, by way of more stringent regulation. We argue that the second remains possible, by extending the logic of today’s dual monetary system. Importantly, central banks should not face a choice between either offering central bank digital currency, or encouraging the private sector to provide its own digital variant. The two can coincide and complement each other, for example, to the extent central banks make certain design choices and refresh their regulatory frameworks.

It may be puzzling to consider that privately- and publicly-issued monies have coexisted throughout history. Why hasn’t the more innovative, convenient, user-friendly and adaptable private money taken over entirely?

The answer lies in a fundamental symbiotic relationship: the option to redeem private money into perfectly safe and liquid public money, be it notes and coins, or central bank reserves held by selected banks.

The private monies that can be redeemed at a fixed face value into central bank currency become a stable store of value. Ten dollars in a bank account can be exchanged into a ten-dollar bill accepted as legal tender to settle debts. The example may seem obvious, but it hides complex underpinnings: sound regulation and supervision, government backstops such as deposit insurance and lender of last resort, as well as partial or full backing in central bank reserves.

Moreover, privately-issued money becomes an efficient means of payment to the extent it can be redeemed into central bank currency. Anne’s 10 dollars in Bank A can be transferred to Bob’s Bank B because they are redeemed into central bank currency in between—an asset both banks trust, hold and can exchange. As a result, this privately-issued money becomes interoperable. And so it spurs competition—since Anne and Bob can hold money in different banks and still pay each other—and thus innovation and diversity of actual forms of money.

In short, the option of redemption into central bank currency is essential for stability, interoperability, innovation and diversity of privately-issued money, be it a bank account or other. A system with just private money would be far too risky. And one with just central bank currency could miss out on important innovations. Each form of money builds on the other to deliver today’s dual money system—a balance that has served us well.

Central bank currency in the digital age will face pressures

And tomorrow, as we step squarely into the digital age, what will become of this system? Will the digital currencies issued by central banks be so enticing that they overshadow privately-issued money? Or will they still allow for private sector innovation? Much depends on each central bank’s ability and willingness to consistently and significantly innovate. Keeping pace with technological change, rapidly evolving user needs and private sector innovation is no easy feat.

Central bank digital currencies are akin to both a smartphone and its operating system. At a basic level, they are a settlement technology allowing money to be stored and transferred, much like bits sent between a phone’s processor, memory and camera. At another level, they are a form of money, with specific functionality and appearance, much like an operating system.

Central banks would thus have to become more like Apple or Microsoft in order to keep central bank digital currencies on the frontier of technology and in the wallets of users as the predominant and preferred form of digital money.

Innovation in the digital age is more complex and rapid than updating security features on paper notes. For instance, central bank digital currencies may initially be managed from a central database, though they might migrate to distributed ledgers (synchronised registries held and updated automatically across a network) as technology matures, and one ledger may quickly yield to another following major advancements. Phones and operating systems too benefit from major new releases at least yearly.

In addition, user needs and expectations are likely to evolve much more quickly and unpredictably in the digital age. Information and assets may migrate to distributed ledgers, and require money on the same network to be monetised. Money may be transferred in entirely new ways, including automatically by chips imbedded in everyday products. These needs may require new features of money and thus frequent architectural redesigns, and diversity. Today’s, or even tomorrow’s, money is unlikely to meet the needs of the day after.

Pressures will come from the supply-side too. The private sector will continue innovating. New eMoney and stablecoin schemes will emerge. As demand for these products grows, regulators will strive to contain risks. And the question will inevitably arise: how will these forms of money interact with the digital currencies issued by central banks? Will they exist separately, or will some be integrated into a dual monetary system where the private and central bank offerings build on each other?

A partnership with the private sector remains possible

Keeping pace with the change of technology, user needs and private-sector competition will be challenging for central banks. However, they need not be alone in doing so.

First, a central bank digital currency may be designed to encourage the private sector to innovate on top of it, much like app designers bring enticing functionality to phones and their operating systems. By accessing an open set of commands (“application programming interfaces”), a thriving developer community could expand the usability of central bank digital currencies beyond offering plain e-wallet services. For instance, they could make it easy to automate payments, so that a shipment of goods is paid once received, or they could build a look-up function so money can be sent to a friend on the basis of her phone number alone. The trick will be vetting these add-on services so they are perfectly safe.

Second, some central banks may even allow other forms of digital money to coexist—much like parallel operating systems—while leveraging the settlement functionality and stability of central bank digital currencies. This would open the door to faster innovation and product choice. For instance, one digital currency might compromise on settlement speed to allow users greater control over payment automation.

And would this form of digital money be an efficient means of payment? Yes again, as settlement would be immediate on any given digital money network – just as it is between accounts of the same bank. And networks would be interoperable to the extent a payment from Anne’s digital money provider to Bob’s would be settled with a corresponding move of central bank currency, just as in today’s dual system.

This form of digital money (which we have called synthetic currency in the past) could well coexist with central bank digital currency. It would require a licensing arrangement and set of regulations to fulfil public policy objectives including operational resilience, consumer protection, market conduct and contestability, data privacy and even prudential stability. At the same time, financial integrity could be ensured via digital identities and complementary data policies. Partnering with central banks requires a high degree of regulatory compliance.

A system for the ages

If and when countries move ahead with central bank digital currencies, they should consider how to leverage the private sector. Today’s dual-monetary system can be extended to the digital age. Central bank currency—along with regulation, supervision and oversight—will continue to be essential to anchor stability and efficiency of the payment system. And privately-issued money can supplement this foundation with innovation and diversity – perhaps even more so than today. Where central banks decide to end up on the continuum between private-sector and public-sector involvement the provision of money will vary by country, and ultimately depend on preferences, technology and the efficiency of regulation.

This article was first published in the IMFBlog and can be read here. 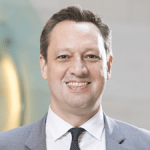 Financial Counsellor and Director, Monetary and Capital Markets Department at the IMF

Tobias leads the IMF’s work on financial sector surveillance and capacity building, monetary and macroprudential policies, financial regulation, debt management and capital markets. Prior to joining the IMF, he was a Senior Vice President of the Federal Reserve Bank of New York, and the Associate Director of the Research and Statistics Group. Mr Adrian has taught at Princeton University and New York University, and has published in economics and finance journals, including the American Economic Review and the Journal of Finance. His research focuses on the aggregate consequences of capital market developments.

Tommaso’s work is focused on monetary policy, central banking and fintech. He has advised country authorities and published on issues related to unconventional monetary policies, monetary policy and financial stability, spillovers, exchange rate regimes and interventions, modelling and forecasting, evolving monetary policy frameworks, as well as fintech and digital currencies. Prior to joining the IMF, Mr. Mancini-Griffoli was a senior economist in the Research and Monetary Policy Division of the Swiss National Bank, where he advised the Board on quarterly monetary policy decisions. Mr. Mancini-Griffoli spent prior years in the private sector, at Goldman Sachs, the Boston Consulting Group, and technology startups in the Silicon Valley.