Home Economy, Policy & Business Price pressures not a major concern yet for the Chinese economy

Price pressures not a major concern yet for the Chinese economy

Increasing commodity prices are a concern among policymakers and businesses, but Oxford Economics remains sanguine about its implications
15.06.2021
Louis KuijsAsia-Pacific Chief Economist at S&P Global

Workers on the production line of an electrical appliances company in Jiujiang, Eastern China. Photo by Shutterstock.

Large price increases for commodities and China’s heavy industry output continue to worry businesses, markets and policymakers (Exhibit 1). If these price increases are sustained, it could lead to substantial consumer price inflation and thus force the People’s Bank of China (PBoC) to tighten monetary policy prematurely.

Other concerns are that profitability in downstream sectors could get squeezed excessively, while some worry that the price pressure may spill over into prices for exports, potentially leading China to “export” its inflation. 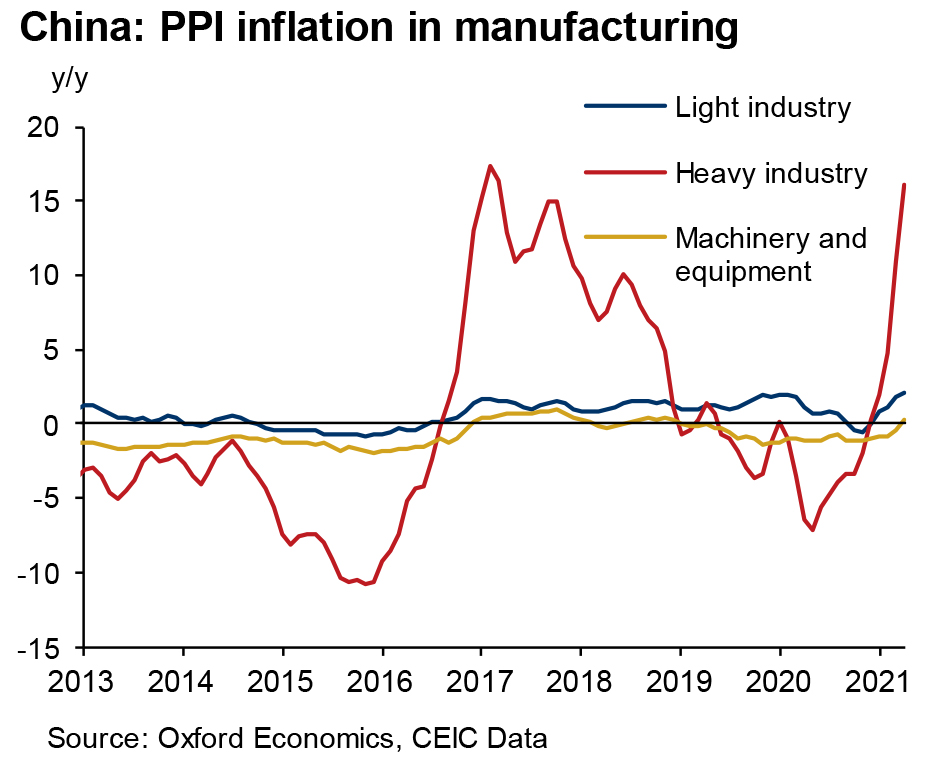 China’s overall PPI inflation reached 6.8% year-on-year in April (Exhibit 2) and we expect it to be even higher in coming months. As we stressed before, the hefty rise in China’s PPI inflation has so far predominantly been driven by rapid increases in commodity prices (Exhibit 3), combined with rising costs of shipping and other supply side pressures. 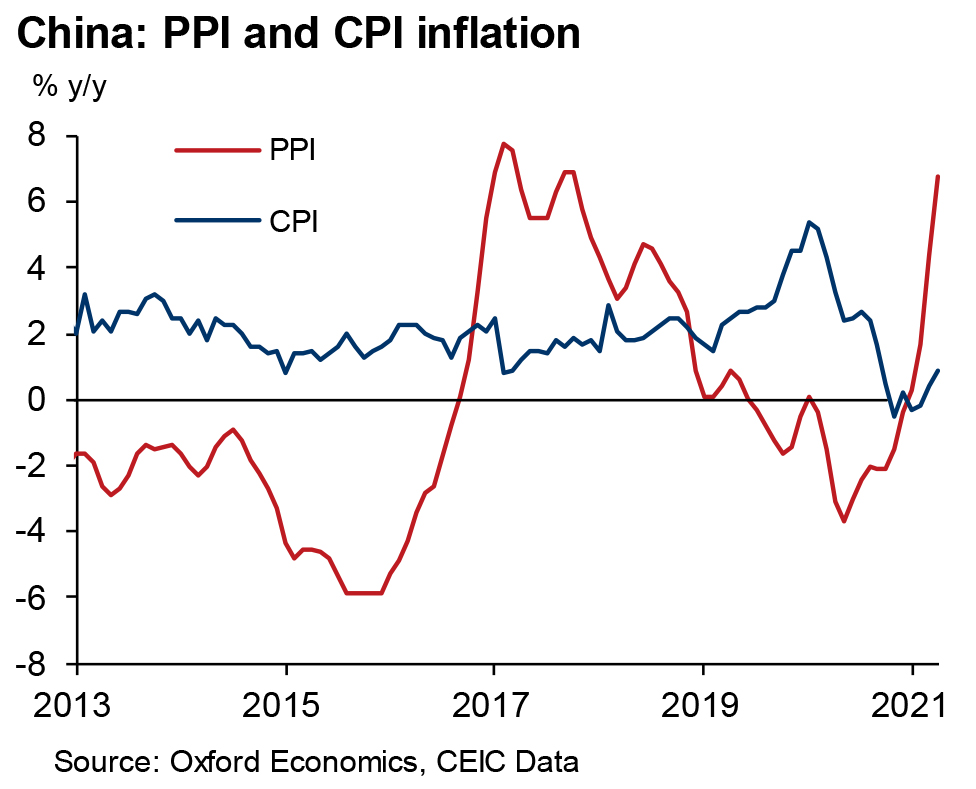 Demand and supply factors have combined to fuel international commodity prices. So far, commodity-intensive infrastructure and real estate investment in China has held up better than expected. Meanwhile, global demand for commodities and heavy industry has recovered more generally. On the supply side, supply disruptions due to COVID-19 globally and restrictions on steel output in China because of environmental regulations have added pressure. 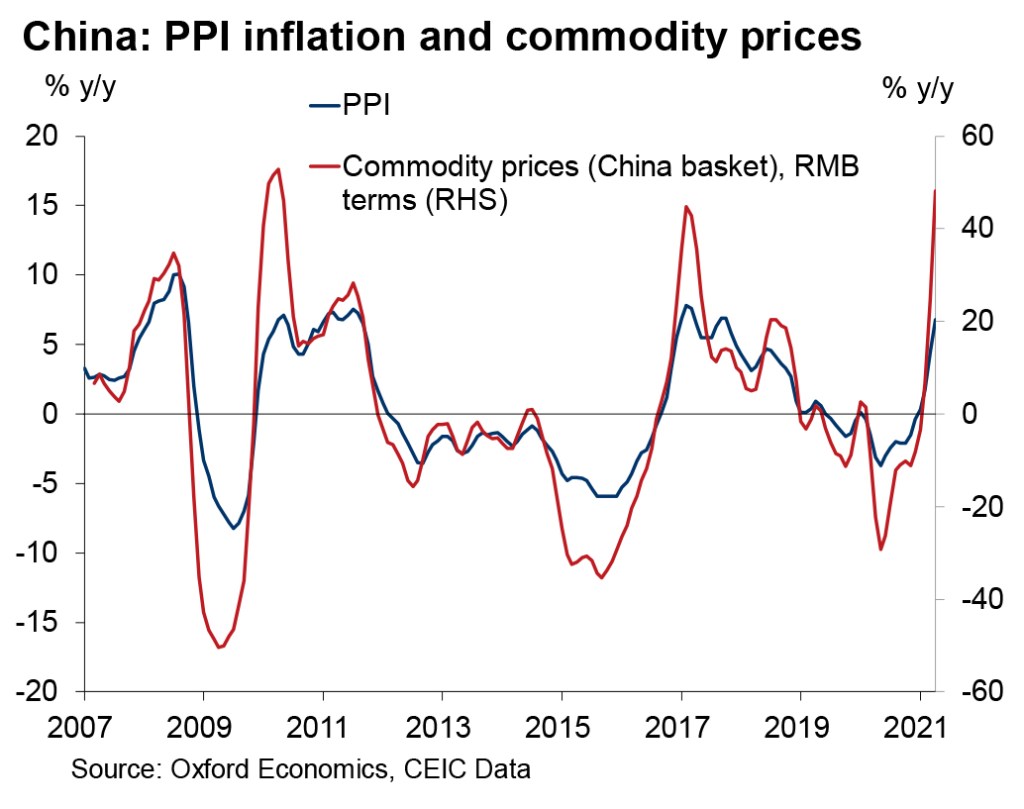 China’s government introduced several measures in late May to rein in prices of commodities and in heavy industry. It discouraged exports of steel products (by eliminating the VAT rebate and putting export taxes on some products) and lowered import tariffs on some steel products. It also tried to discourage speculation in commodity markets, including by increasing margin requirements and transaction fees for some futures trading. Additionally, it asked large coal mines to expand production and called on large firms in the iron ore, steel, copper and aluminium sectors to contain prices. And it seems to have eased some environmentally-oriented restrictions on steel output, at least temporarily.

While some have speculated the authorities may use a strong exchange rate policy to lower the impact of high commodity prices, we think that unlikely. In its Q1 Monetary Policy report, the PBoC said it expected the increase in commodity prices to be temporary and the spillover from output prices to consumer prices to remain modest.

An official PBoC statement on 27 May abstained from any language on the desire for a strong exchange rate. Indeed, in recent days, a small change to the ‘fixing rate’ (toward weakening) and an increase in the reserve requirement on FX holdings suggest that the authorities have decided to lean somewhat against the appreciation pressure. This will avoid worsening the competitiveness of export-oriented manufacturing, after a 7.5% appreciation against the currency basket since end-July (Exhibit 4). 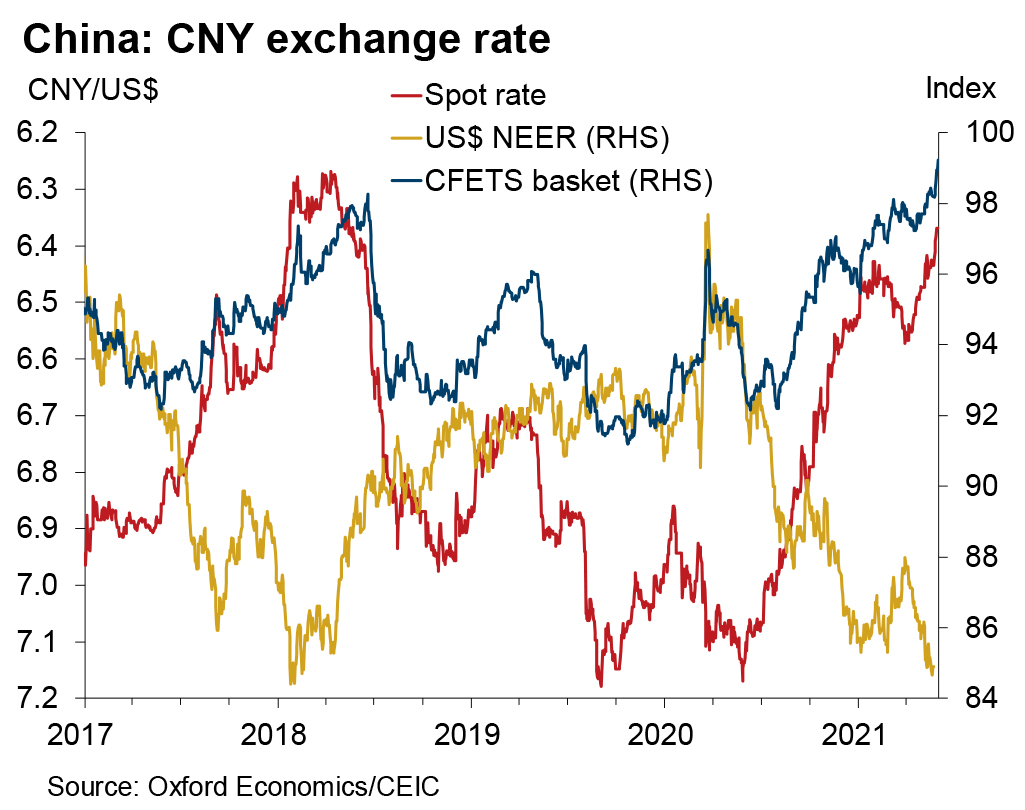 We expect the impact of China’s measures to be limited. While the easing of restrictions on steel output could have a substantial impact, discouraging firms from raising prices is hard to maintain if generalised price pressures persist.

Still, we don’t expect international commodity prices to continue to rise (Exhibit 5). We expect China’s commodity-heavy infrastructure and real estate investment to cool as growth rotates toward corporate investment and consumption, amid a consolidation of China’s economic recovery and normalisation of macro policy. 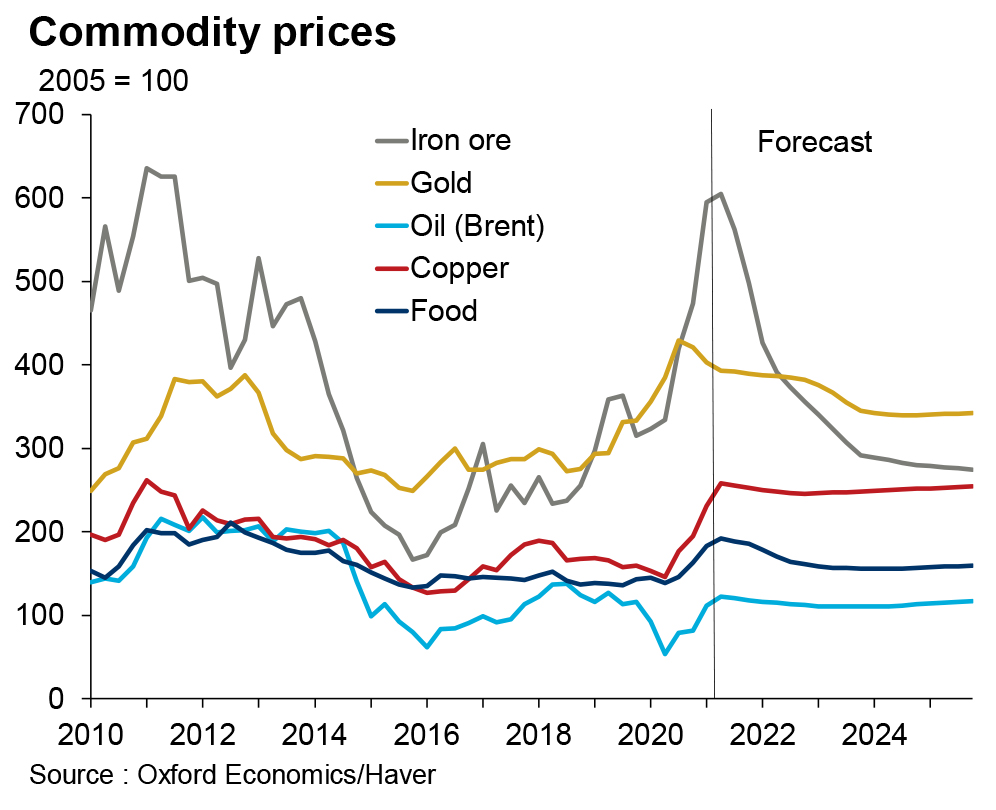 Commodity demand from elsewhere should continue to pick as the global economic recovery gathers pace and governments embark on ambitious infrastructure plans, especially in the US. But our industry team expects the (delayed) expansion of supply and the resolution of bottlenecks to outpace the demand increase in the coming months. That said, in markets such as copper, prices should merely stabilise—not fall—as the transition to green energy sustains demand.

We expect spillover to remain low. In most downstream sectors, strong competition will make it hard for firms to pass on the cost increases by raising their own prices. This could suppress profitability, which could be problematic, especially for small firms. But if—as we expect—the pressure from commodity prices is temporary, that downside pressure on profitability will also be transitory. Meanwhile, the limited degree of pass-through should contain the impact on consumer prices and export prices, as in 2017.

Still, given the recent trends, we expect overall PPI inflation to remain above 7% year-on-year for much of 2021, but it should come down after that (Exhibit 6). Meanwhile, we expect CPI inflation to rise to 2.6% by end-2021. With the year-average expected to remain below 3% in both 2021 and 2022 we don’t expect inflation to impact monetary policy substantially. 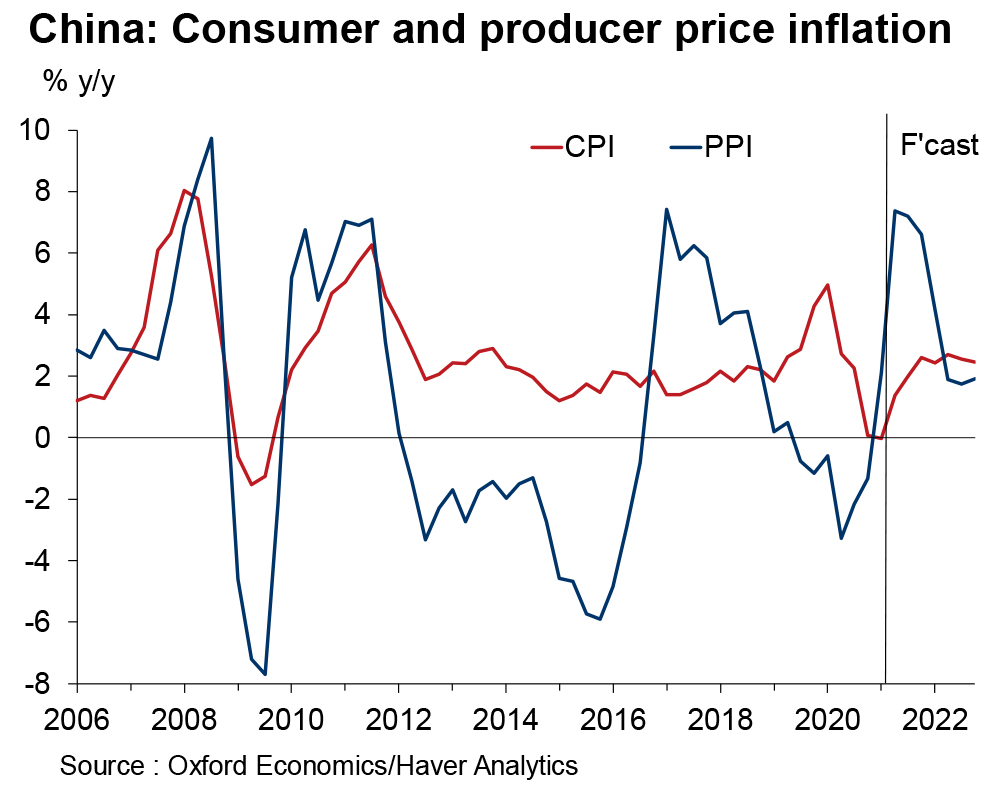 Also, with output price increases in light industry and machinery and equipment expected to remain well-contained, the bout of price pressure should not lead to significant increases in the price of China’s exports.

There is, however, a catch. The significant recent appreciation of the CNY means that, while output prices in light industry and machinery and equipment remain well-behaved in CNY terms, they are rising by high single digits in US-dollar terms (Exhibit 7). Thus, although China is not obviously exporting inflation in its own currency terms, from a US perspective rising prices of imports from China may start to feature in  debates about inflation there. That is so even though in the eurozone, where the currency has not depreciated against the CNY, prices of imports from China are still falling on a year-on-year basis. 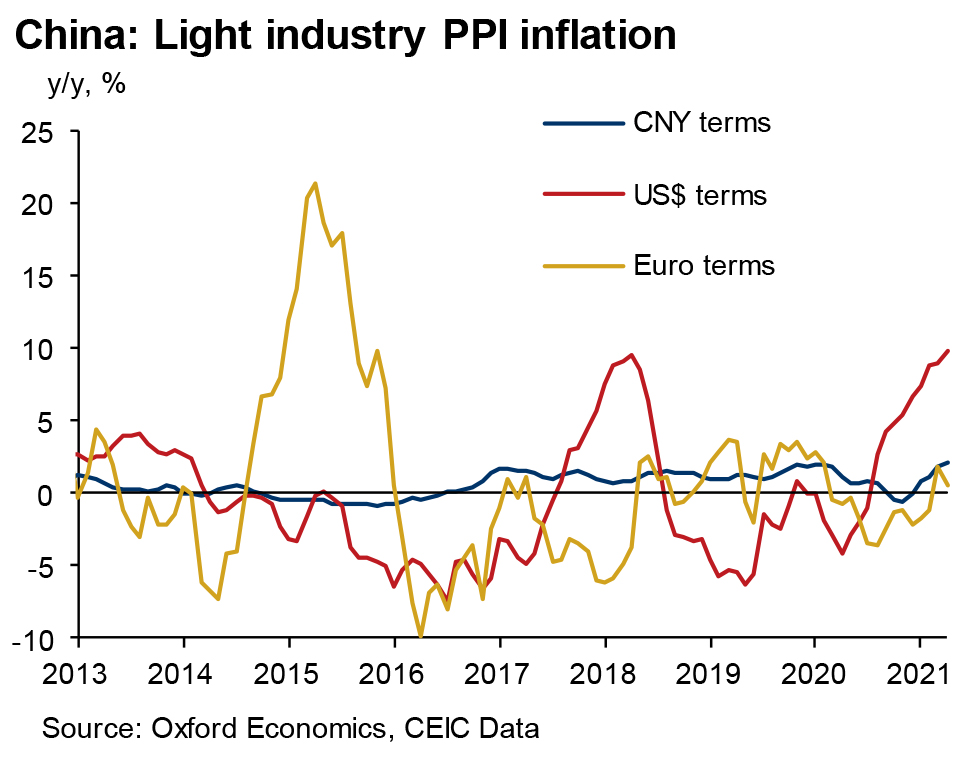 While we remain quite sanguine overall on the price pressures affecting China’s economy, we could be wrong. If global commodity prices continue to rise significantly in the coming six months, inflation will become a significantly larger problem – globally and in China.