We speak with a corporate veteran about the impacts of growing trade protectionism on European companies
27.10.2020
An interview with
Harald EinsmannDirector of Tesco, Harman International and Checkpoint Systems

Growing protectionism around the world has had severe impacts for multinational organisations that have, until now, reaped the many benefits of globalisation. As scepticism around free trade continues to grow and geopolitical developments such as the US-China trade and tech war continue unabated, companies have had to take stock, readjust their supply chains and rethink their operations.

In this interview, Harald Einsmann, who worked for almost four decades at Procter & Gamble in various capacities including as President of Procter & Gamble Europe, Middle East and Africa and as a member of its worldwide board, talks about the impacts of geopolitical trends on multinational businesses—with a focus on UK and European companies—and about what Brexit could mean for the European project.

Unravel: We’re seeing a wave of trade protectionism around the world. How does this impact multinational businesses?

Harald Einsmann: The growing trade protectionism in many parts of the world, partly stoked by Donald Trump, is disrupting the supply chain of many multinational businesses. Many of these businesses, in a globally open world, spent many years to establish the best and the least costly suppliers. They will now have to re-arrange some of these supply chains. This will, almost certainly, result in a loss of efficiency and all those fruits of many years of optimising. And they will now have to either retreat to national supply chains, or move to others which are not targeted by President Trump, and other similarly inward-looking leaders.

Unravel: How can multinational companies respond to this trend?

Mr Einsmann: This process will certainly result in higher costs and more complicated supply situations, which will have to be passed on as higher prices to the end consumers. The price pressure may be delayed a little, because the COVID crisis has also caused a major pressure, and sometimes collapse, of demand. And I do think that many of these companies will initially not dare to pass on these extra costs, but eventually they will have no choice but to raise prices – which will, in many cases, cause a decrease in consumers’ living standards.

Unravel: Is the China-US trade war impacting UK/ European businesses? In what way?

Mr Einsmann: Yes, the China/US trade war is impacting virtually every country in the world, negatively, including businesses in Europe and the UK. The unnecessary punishing duties and restrictions, which the US has imposed under the disguise of “security”, will harm everybody. Starting with Chinese tech businesses, aluminium and steel of several countries, French wine and cheese, and the threat to German automobiles, are all not helpful at all.

Trade protectionism will certainly result in higher costs and more complicated supply situations, which will have to be passed on as higher prices to the end consumers.

Other multilateral trade agreements, outside the US, will need to be pushed forward in order to at least partly offset these damages. As an example, the German automobile company BMW manufactures in the US, and exports more BMW cars from the US than General Motors, Ford and Chrysler combined. So where is “America First”?

Unravel: What does Brexit mean for the European project? In your view, is it a major setback?

Mr Einsmann: Brexit is a major setback to the European project. Previously, the UK was a useful and healthy counterweight to the sometimes over-centralising French and the Germans. To explain this, Germany twice in the last century tried to not only lead Europe, but conquer it with very questionable means. Which is why they have now been reluctant to take any leadership role, because it may be misinterpreted by their partners as trying to dominate Europe once again. Brexit is a very negative influence, by also potentially setting other members of the 27 EU countries a precedent.

But, on the other hand, it may have also strengthened the European project somewhat, because the UK’s exit will result in the worst recession it has had since 1929. For instance, UK’s GDP in the third quarter of 2020 shrank by 20%, when most other European countries shrank only by around 10%. The fact that Boris Johnson is strictly pursuing a “no deal Brexit” will lead to chaos, and even supply shortages in essentials like medicine and food in the UK. He has surrounded himself with hard-line Brexit supporters, as opposed to the most able ministers for the government departments concerned. Only the removal of Boris Johnson and most of his Brexit Ayatollahs, followed by replacing them by the most able people in a new government, could help mitigate these regrettable consequences.

Unravel: In the context of what is said to be the worst slowdown since the Great Depression, what are some ways for large companies to tide through this crisis?

Mr Einsmann: The best way to counter these very regrettable and negative results, is for these companies to continue working towards a restoration of free trade. This would include the reversal of Brexit, and an increased push to restore globalisation, as well as majorly increase research and development in areas of the future – such as a greener environment, a fully digitalised world, AI and healthcare. 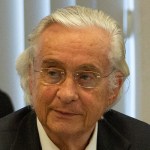 Dr Einsmann was president of Procter and Gamble, Europe, Middle East and Africa, and a member of its worldwide board. He has an extensive experience of the consumer industry having worked for 38 years at Procter & Gamble. Other board memberships include EQT, (a leading private equity group), BAT, EMI, Storo Enso, The Carlson Group, Rezidor Hotel Group, Harman Kardon, Checkpoint Systems, Valio Dairy, Tesco PLC and Tesco China.