Pandemic or not, foreign corporate bribery continues to thrive

The menace of foreign bribery by multinational companies has worsened, and its costs and consequences have become more severe during the COVID-19 pandemic
27.10.2020
Unravel editorial team

Despite the pandemic, foreign bribery by multinational companies continues. Photo By Shutterstock.

Despite proclamations of “doing good” and “being responsible” at a time the world is in the throes of a crisis the likes of which we haven’t seen in our lifetimes, companies haven’t walked the talk. Far from it.

As the world continues to come to terms with the myriad costs of the pandemic, bribery of foreign public officials by multinational corporations has continued unabated, and its costs for people, increased.

According to Transparency International’s 2020 report, Exporting Corruption, the “bribery of foreign public officials has huge costs and consequences for countries across the globe and those costs have become more severe during the COVID-19 pandemic.”

“With so many cases of foreign bribery occurring in healthcare, we cannot afford for corruption to cost any additional lives,” the report added.

The report assesses the performance of the top 47 global exporting countries, of which 43 are signatories to the Organisation for Economic Cooperation and Development (OECD) Anti-Bribery Convention. It has been 20 years since this Convention was adopted and most countries are far from meeting their obligations.

In fact, since 2018—when the last edition of this report was published—active enforcement has significantly decreased. 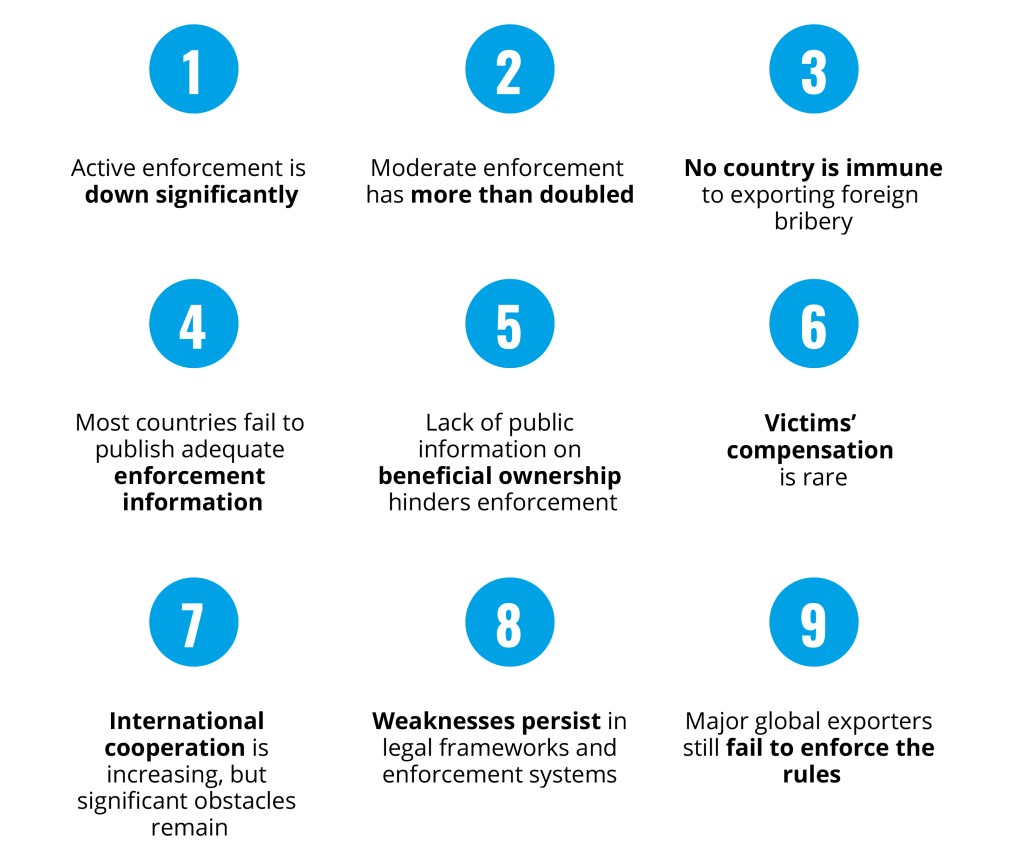 Who has improved and who hasn’t?

France, Spain, Denmark, Colombia, Slovenia and Estonia improved their enforcement levels as compared to 2018, and together, they account for 6.8% of global exports. Spain jumped two levels from 2018 – from little or no enforcement to moderate enforcement and this is largely due to the boost in enforcement brought about by a greater focus on anti-corruption.

Money lost to foreign bribery wastes millions of dollars that could otherwise go to lifesaving services like healthcare…Too many governments choose to turn a blind eye when their companies use bribery to win business in foreign markets.

France, meanwhile, made one level improvement since 2018 due to legislation in 2017 that provided new tools to enforcement authorities. Colombia, Denmark, Estonia and Slovenia also improved – from little or no enforcement in 2018 to limited enforcement in 2020.

At the other end of the spectrum, Germany, Italy and Norway fell from active to moderate enforcement. Hungary, meanwhile, went from limited to little or no enforcement. These four countries combined account for 11.3% of global exports.

Meanwhile, the report identifies China, Japan, the Netherlands, South Korea, Hong Kong, Canada, India and Mexico as the biggest global exporters with the poorest track record. Between 2016 and 2019, China, Hong Kong and India did not open a single investigation related to foreign bribery, for instance.

International cooperation in foreign bribery can happen in the form of “mutual legal assistance (MLA), extradition and informal exchanges of information for intelligence gathering purposes”.

It can also take the form of reaching joint multi-country settlements or other arrangements for handling cases – though such cooperation comes with a string of challenges.

Due to foreign businesses being based out of multiple locations and therefore subject to different jurisdictions, it is critical that international cooperation is stepped up to ensure successful investigation, prosecution and sanctioning of international corruption offences, according to Transparency International.

However, challenges that were identified in 2018 with respect to international cooperation and MLA still remain. While several global settlements linked to big companies have happened in recent years, the real perpetrators have often gone unpunished. Robust enforcement cooperation mechanisms across borders are imperative, and one of the ways to achieve this is by regularly having international meetings of law enforcement officials.

Another critical component to improving international cooperation across borders is to conduct joint investigations and have information-sharing agreements and dedicated coordination bodies such that resources can be pooled together when needed to enforce the law. In all of this, data plays an important role and publication of data on MLA requests will only help the case for foreign bribery enforcement.

A plethora of negative impacts

When foreign bribery and corruption in international business transactions go unchecked and escape the rule of law, it has negative impacts across the value chain of a country.

Such corruption not only undermines government institutions, but also misdirects public resources that could have been used for better reasons and eventually slows economic and social development.

Bribery of foreign public officials has huge costs and consequences for countries across the globe and those costs have become more severe during the COVID-19 pandemic.

As far as businesses are concerned, corruption aids in distorting cross-border investment, hampers fair competition in international trade and most importantly, it discriminates against small and medium-sized enterprises, which often constitute the backbone of an economy.

Businesses and governments across the world have a responsibility to fulfil, and certainly have their job cut out to address the menace of foreign bribery. Delia Ferreira Rubio, Chair of Transparency International sums it up aptly: “Money lost to foreign bribery wastes millions of dollars that could otherwise go to lifesaving services like healthcare…Too many governments choose to turn a blind eye when their companies use bribery to win business in foreign markets. G20 countries and other major economies have a responsibility to enforce the rules.”