Prospects for FDI inflows into Asia-Pacific over the medium term remain strong, even if pandemic-driven supply disruptions and uncertainties over the pace of recovery see some firms rethink their supply chains
19.10.2021
Sian FennerLead Asia Economist at Oxford Economics

A view of Hanoi, Vietnam. China and Vietnam top the FDI attractiveness scorecard with Vietnam set to continue gaining from supply chain restructuring. Photo by Minh Luu on Unsplash.

The pandemic hit global foreign direct investment (FDI) hard, with flows falling by 35%, to $1 trillion in 2020, the lowest level since 2005. However, while performances differed significantly across the region, the Asia-Pacific region overall remained an attractive destination for foreign investment. Led by China, inflows rose by around 6%.

Uncertainties over the pace of economic recovery, and risk of restrictions being reimposed amid low vaccination rates in several economies, are likely to weigh on FDI prospects in the short term. But we see any setback as temporary, and we still believe medium-term prospects for FDI inflows into the region remain strong. That said, performances will be uneven based on an economy’s labour dynamics, the quality of infrastructure, and the business environment, as well as openness to foreign investment (Exhibit 1).

We have updated and expanded our previous FDI attractiveness scorecard. While not directly comparable, we find that despite the economic scarring caused by the pandemic, our attractiveness rankings are broadly unchanged. Emerging Asia, particularly those countries with large domestic markets and/or favourable labour dynamics, continue to outrank advanced economies. 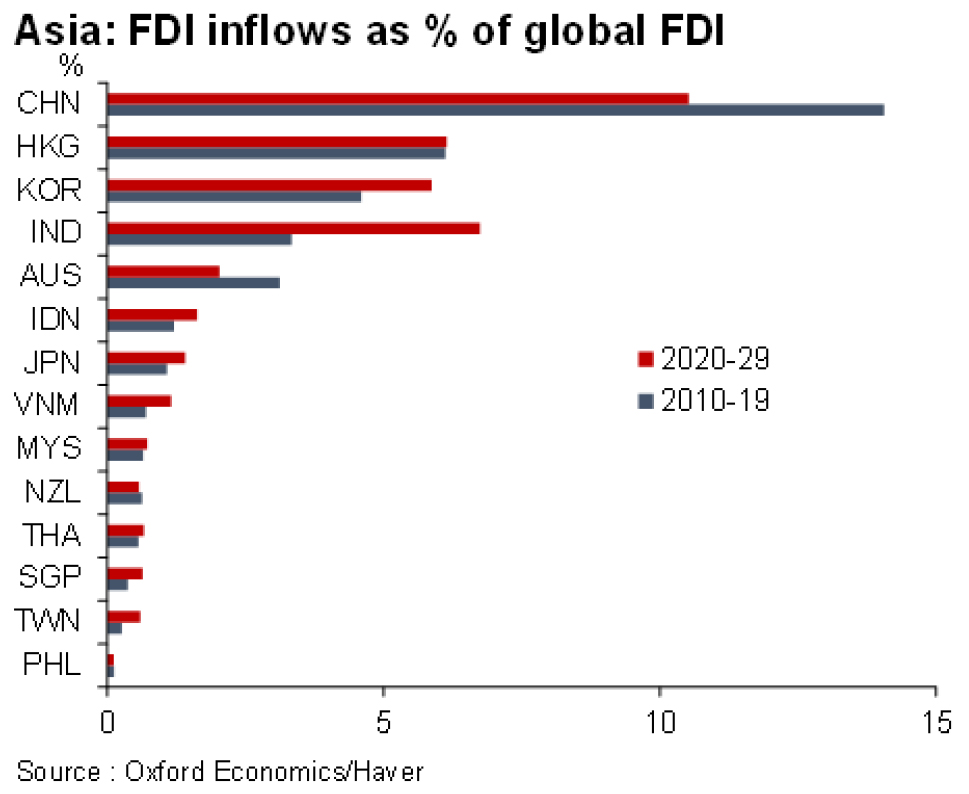 Based on our new FDI scorecard, we see China as the most attractive destination for FDI, accounting for over 9% of global FDI over the next decade (Exhibit 2). That said, we expect its share of global FDI inflows to trend lower over 2020-29, as the composition of foreign investment into China continues to evolve and China itself increasingly becomes a source of foreign investment in the region. 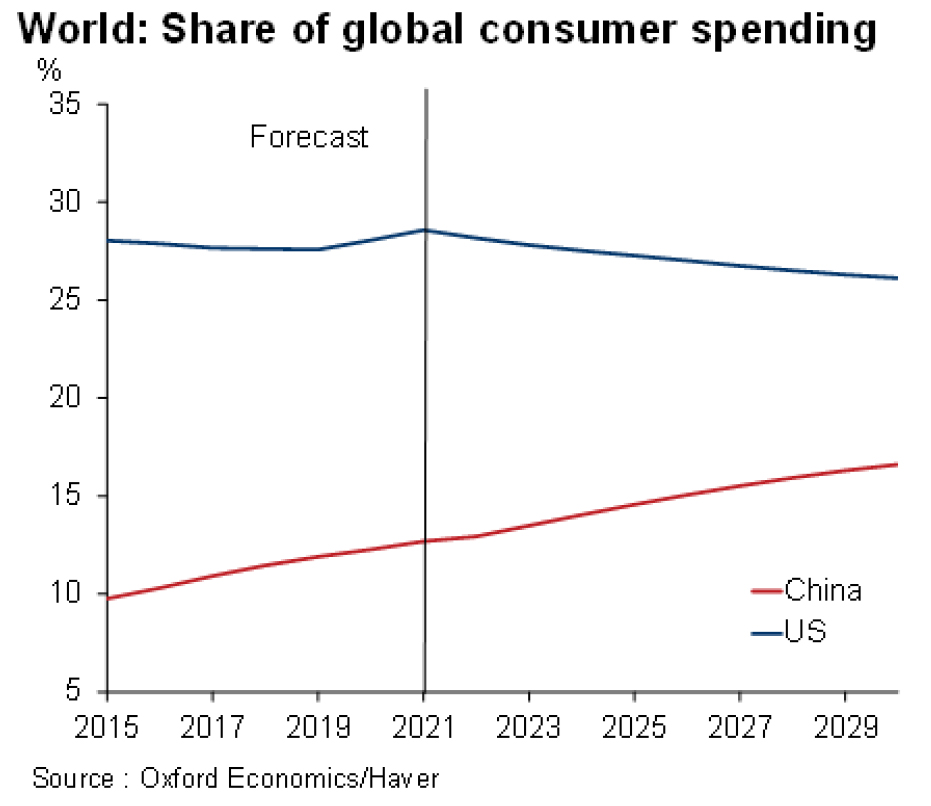 Meanwhile, we expect FDI previously directed towards low-skilled export-oriented manufacturing to continue to be redirected to other Asian economies. Indeed, the region is already well established in global and regional supply chains, and FDI inflows into the manufacturing sector have accelerated over the past five years, particularly in Vietnam, where inflows have averaged over 11% per annum (Exhibit 4). 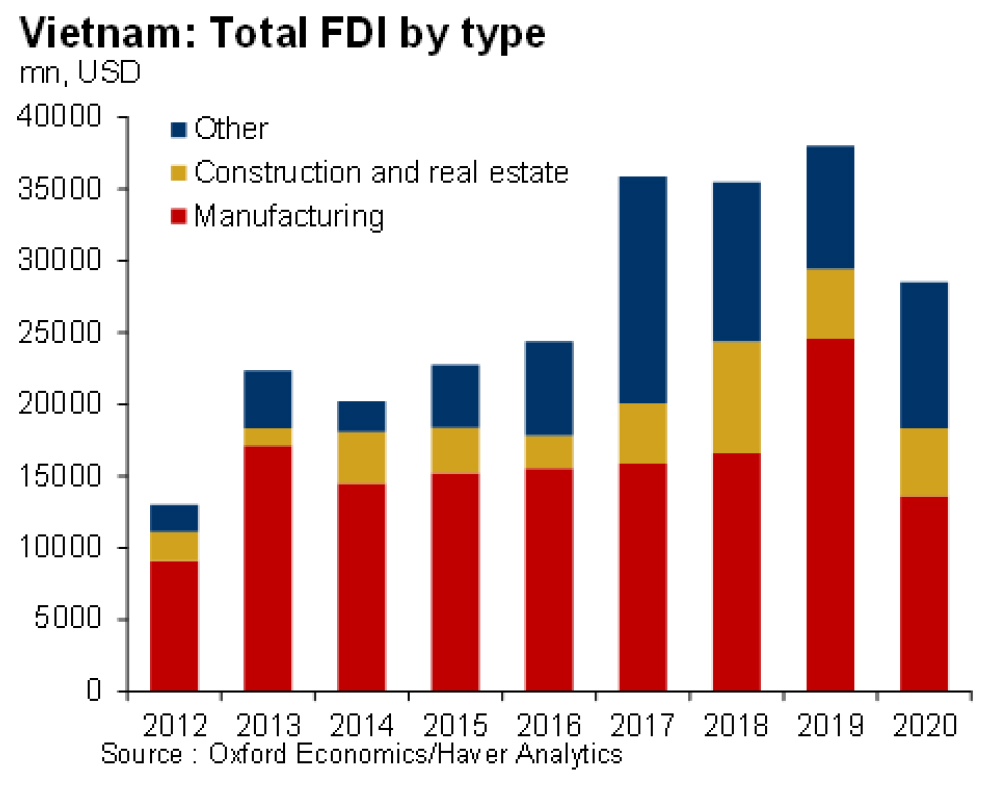 Southeast Asia benefits, but performance will be uneven

We expect Vietnam to continue to benefit from these supply-chain adjustments given its close proximity to China, low wages and participation in trade agreements.

While lengthy lockdowns have delayed new potential FDI inflows and the disbursement of FDI in Vietnam, restrictions are easing. The government is also prioritising vaccinating workers in the important manufacturing sector to limit ongoing economic costs from the pandemic and longer-term impact on FDI and growth. That said, Vietnam still needs structural reforms to improve firms’ ability to do business in the country, and must ensure adequate education to enhance the scalability of production.

Across the rest of emerging Southeast Asia, we expect the ability to attract FDI inflows will be uneven. We rank Malaysia as the third-most attractive destination for FDI inflows over the next decade, with Indonesia ranked at a respectable sixth, behind India. However, we see the Philippines as being one of the least attractive among the Asia-Pacific economies. This adds further weight to our forecast that the extent of economic scarring caused by the pandemic will be especially large in the Philippines.

Indonesia and the Philippines both score high in terms of their labour dynamics. Ongoing urbanisation and a relatively young workforce mean that over the next decade we expect the labour supply in these two economies to rise by 25 million. We also forecast their average annual earnings to be around a third lower than in China in 2029.

But despite this relative wage cost advantage, Malaysia is ranked much higher, due to its better-educated labour force and the quality of its infrastructure and business climate. Those factors have contributed to a shift towards medium-skilled manufacturing in Malaysia, notably in electronics, at the expense of Singapore.

Thailand also scores well in terms of education and its infrastructure and business environment, and has seen its automobile industry attract FDI, primarily from Japan and South Korea.

But infrastructure and business climate weak

In contrast, the Philippines and Indonesia both score poorly in infrastructure and business environment. Despite some improvement over the past five years, the Philippines is ranked 92 out of 140 countries in terms of its quality of infrastructure. And while Indonesia is better placed at 71, this is still lower than Thailand and Malaysia (Exhibit 5). 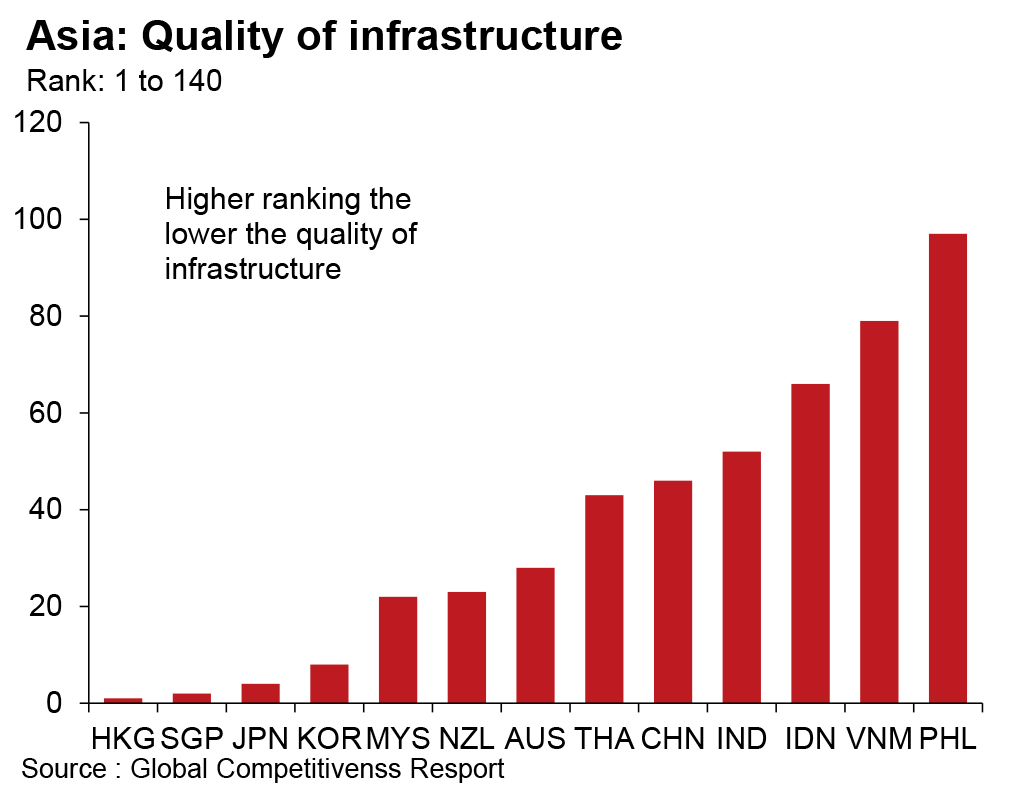 The Philippines and Indonesia also score poorly in terms of firms’ ease of doing business. According to the World Bank’s Ease of Doing Business Report 2020, they are both ranked 70 or above out of 190 countries, comparing unfavourably to the advanced Asian economies and several of their regional peers (Exhibit 6). 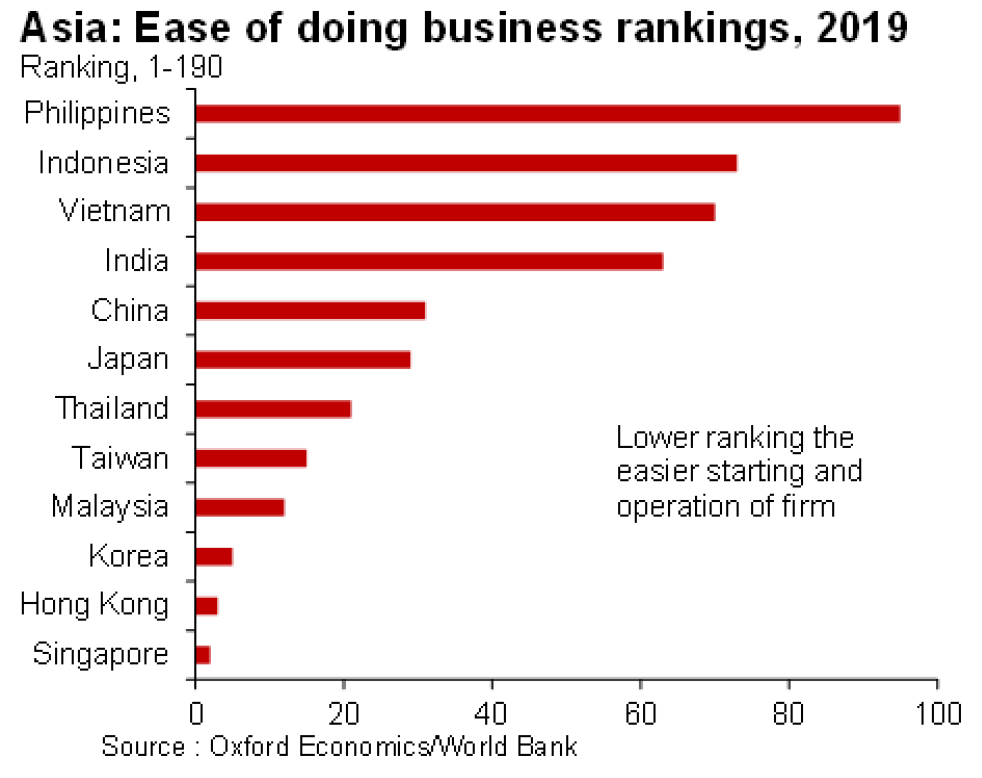 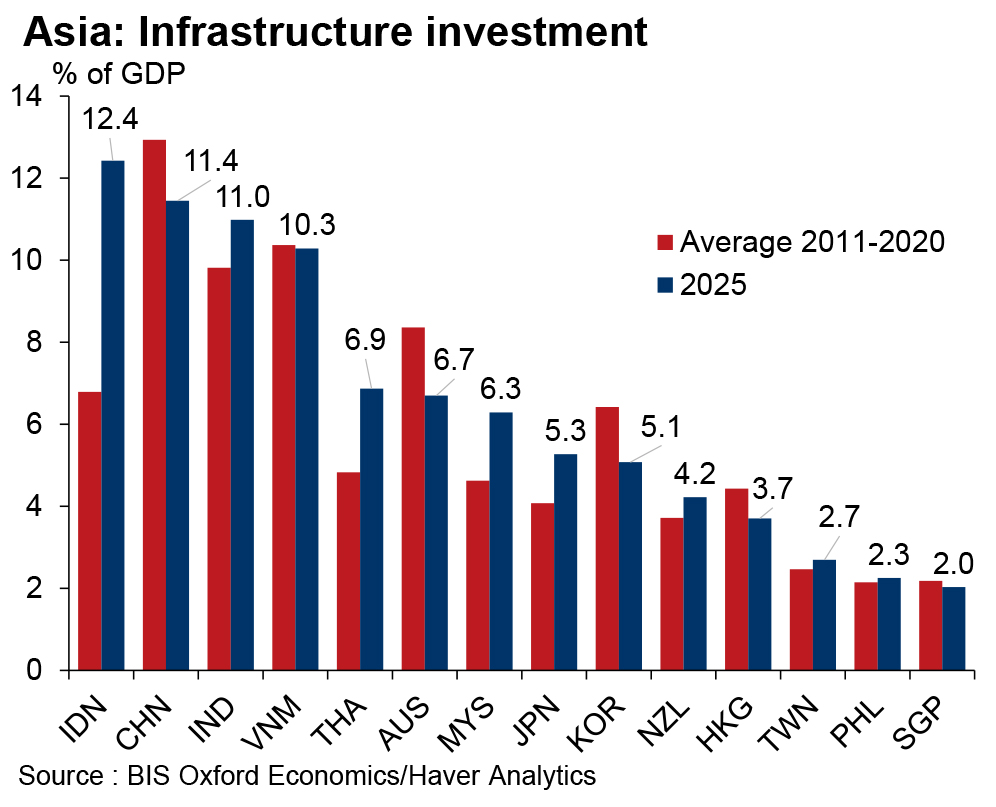 Southeast Asian economies are also pursuing policies to attract more FDI. The Philippines lowered the corporate tax rate to 20% from 30% at the start of 2021 and plans to ease mandatory local employment requirements for foreign investors. Thailand has introduced new tax incentives to attract FDI, and Indonesia has simplified its tax and labour market laws.

India shares several characteristics with Southeast Asian economies, notably very favourable labour supply dynamics, with its labour supply set to expand 47 million over the next decade. However, it has one of the lowest urbanisation rates in the region and it has a relatively poor infrastructure and business climate.

The government has renewed its focus on structural reforms, including simplifying labour laws and launching the Production Linked Incentive and the Promotion of Manufacturing of Electronic Components and Semiconductors schemes. These could provide a significant boost to manufacturing and foreign investment in principle.

But supply bottlenecks, financing issues and local content regulations will remain constraints for now. That said, we rank India as the fourth most attractive destination for FDI inflows over the next decade given the need to meet the demands of its growing middle class.

Unsurprisingly, advanced economies rank high in terms of education levels, quality of infrastructure, and business and political climate. However, our scorecard still places them relatively low overall in terms of FDI attractiveness, due to their high wages and challenging demographic outlook.

These economies are the least likely to benefit, at least directly, from any adjustments to regional manufacturing supply chains. The exception is Taiwan, where the pandemic and US-China tensions have led to some reshoring of manufacturing by Taiwanese multinationals.

The FDI environment has also become more restrictive since the pandemic. Japan, South Korea and Australia have all introduced tighter screening regulations, which will dampen future FDI somewhat.

However, while the advanced economies may not be as attractive destinations for FDI, we do expect them to remain important sources of regional FDI, with the RCEP agreement further boosting intra-regional inflows as the trade bloc becomes more economically integrated.