The CLMV bloc has been relatively more successful in containing the spread of COVID-19 as compared to the rest of ASEAN, but its recovery will be dependent on a rebound in exports, tourism and domestic demand
11.09.2020
Sian FennerLead Asia Economist at Oxford Economics

Ho Chi Minh City in Vietnam. CLMV countries have been relatively successful in containing the spread of COVID-19. Image by Quang Nguyen vinh from Pixabay.

The CLMV bloc (comprising Cambodia, Laos, Myanmar and Vietnam)—which is home to 174 million people—has been the fastest growing sub-region in ASEAN in the past decade, recording on average 6.7% GDP growth annually.

Favourable labour dynamics and an improving investment environment have also seen the group, led by Vietnam, become an increasing destination for FDI inflows.

However, the impressive growth of the past decade is set to be derailed this year as the global pandemic has crushed tourist arrivals, disrupted supply chains and reduced external demand sharply (Figure 1). Household spending, particularly on service-related activities, has also taken a hit from domestic lockdowns.

Figure 1: Despite a sharp slowdown in economic activity this year, CLMV GDP growth is still set to outpace the ASEAN-5 economies 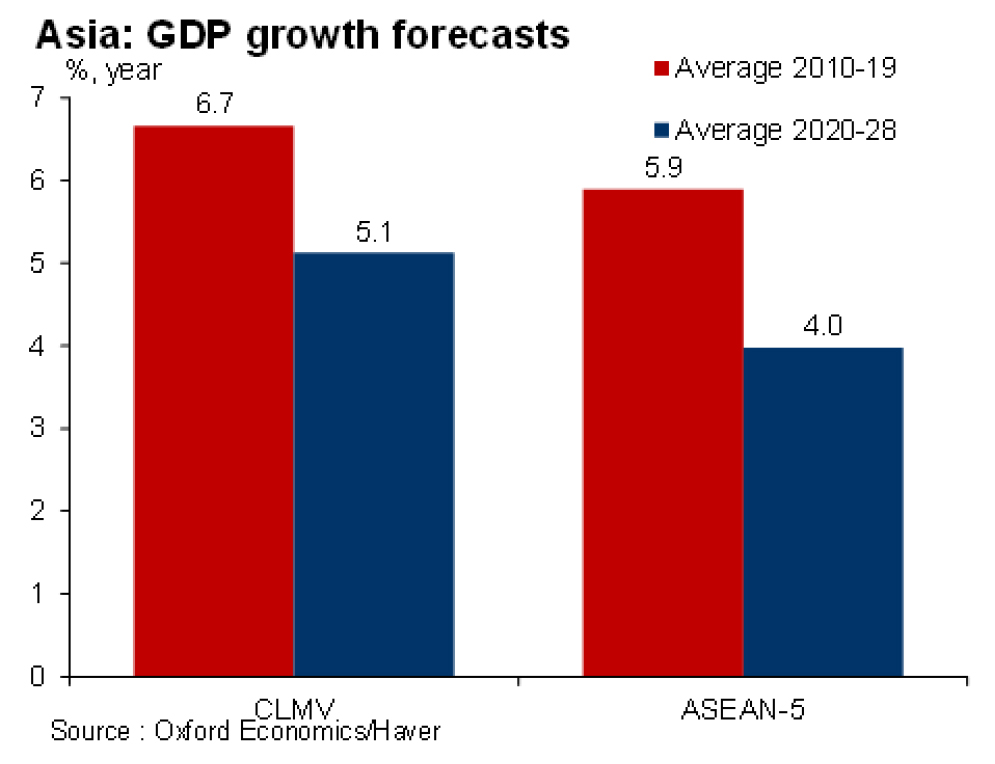 CLMV countries have been relatively successful in containing the spread of COVID-19. Despite some renewed outbreaks in Vietnam and Myanmar, the number of new and accumulative cases is still low compared to most in the region (Figure 2).

The bloc’s early health success allowed governments to ease restrictions after relatively short lockdowns in April and workplace mobility is returning to pre-crisis levels at a faster pace than in ASEAN-5 economies.

Still, the economic impact will be large, and will predominantly be felt through three channels: exports, tourism and domestic demand. 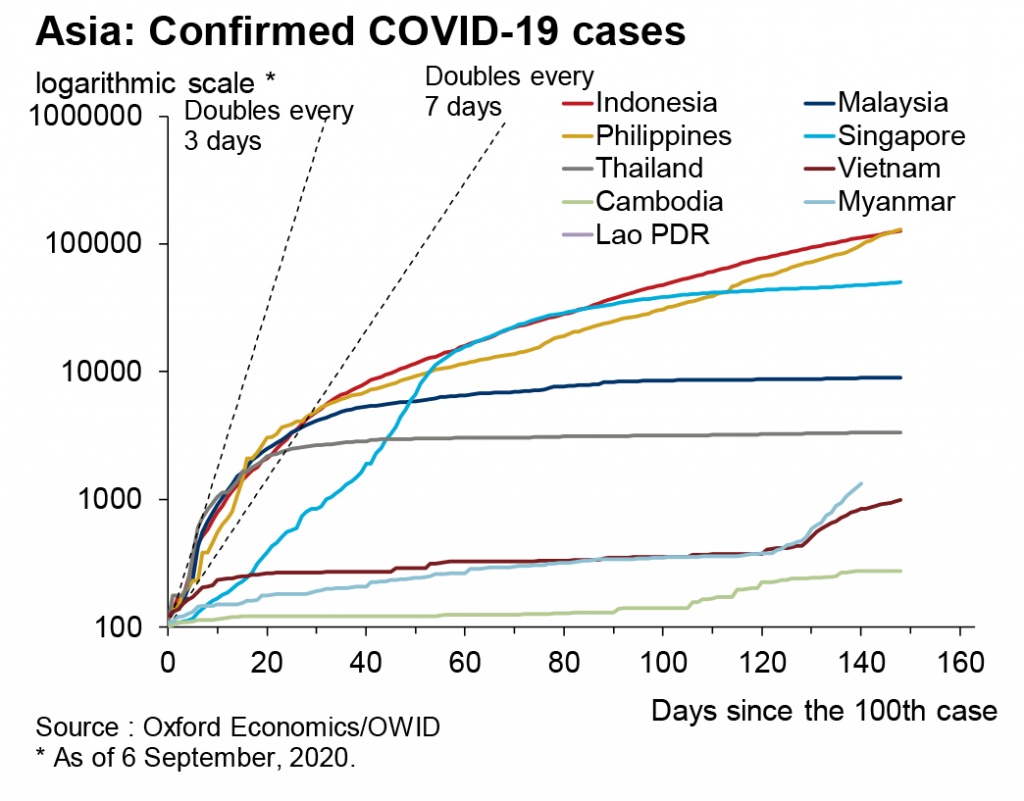 Activity was hit hard, but recovery is underway

At the peak of lockdown restrictions in April, daily Google workplace mobility data—an indicator of economic activity—fell by 30%-70% below baselines across the bloc, signalling that economic activity came to a virtual standstill (Figure 3).

Timely GDP data is not widely available across CLMV countries, but data for Vietnam showed GDP growth slowed to only 0.4% in the second quarter, down from 3.7% year-on-year in the first quarter, as measures to contain COVID-19 led to a contraction in the service sector.

Activity is likely to have slowed even further in the more domestically-driven Laos and Myanmar, given sharper falls in mobility in the second quarter of the year. Since easing restrictions in late-April and May, workplace mobility has risen outside of holiday-related dips. That said, mobility data points to some variation in the pace of recovery across the bloc.

Figure 3: Mobility trends point to a pick-up in activity from April’s lows 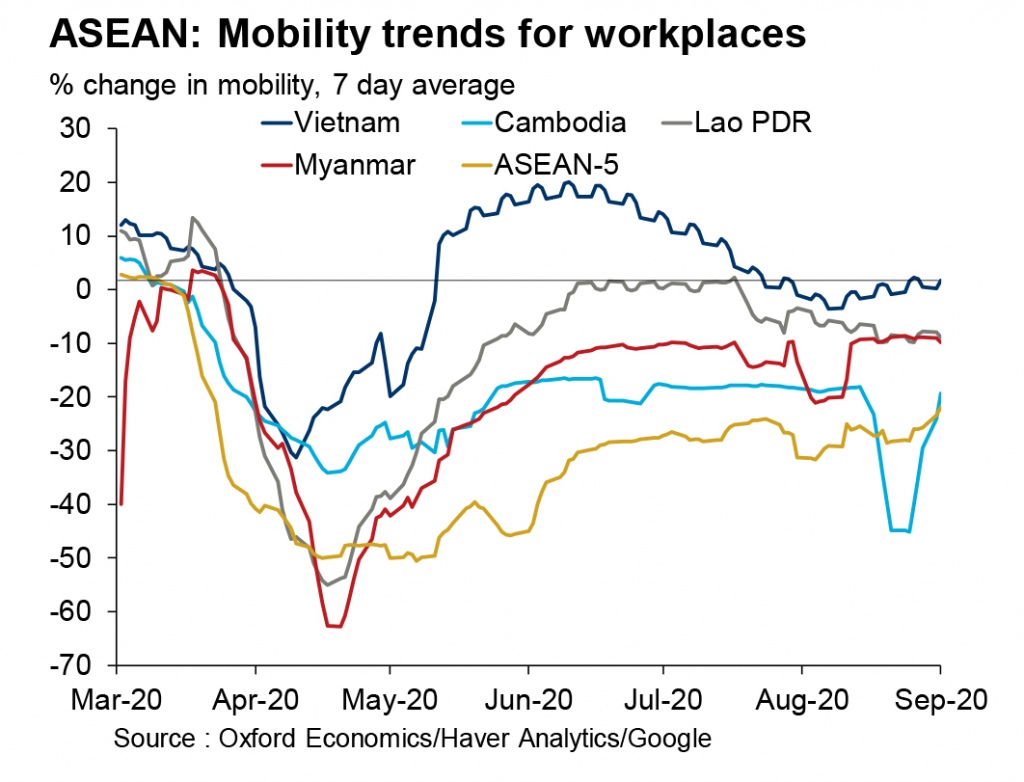 In Vietnam, the localised tightening of restrictions saw workplace mobility fall slightly in August, although it is still at around normal levels (Figure 4).

Mobility in Myanmar has also improved substantially. The manufacturing PMI rose to a fifteen-month high in August due to stronger activity and new orders, which bodes well for the recovery.

Laos, meanwhile, has seen a steady improvement in mobility trends too, but we remain cautious about the pace of recovery. Forced factory closures have led to a reported 60,000 job losses, around 2% of formal employment, with a plunge in tourists likely to have impacted a further 11%. While the government is providing some support, including compensating 60% of workers’ wages for those that participate in the social security scheme, this covers less than 3% of total employment. Household incomes will also be impacted by lower remittances following the return of an estimated 100,000 migrant workers.

Figure 4: Impact of localised restrictions on manufacturing to be limited 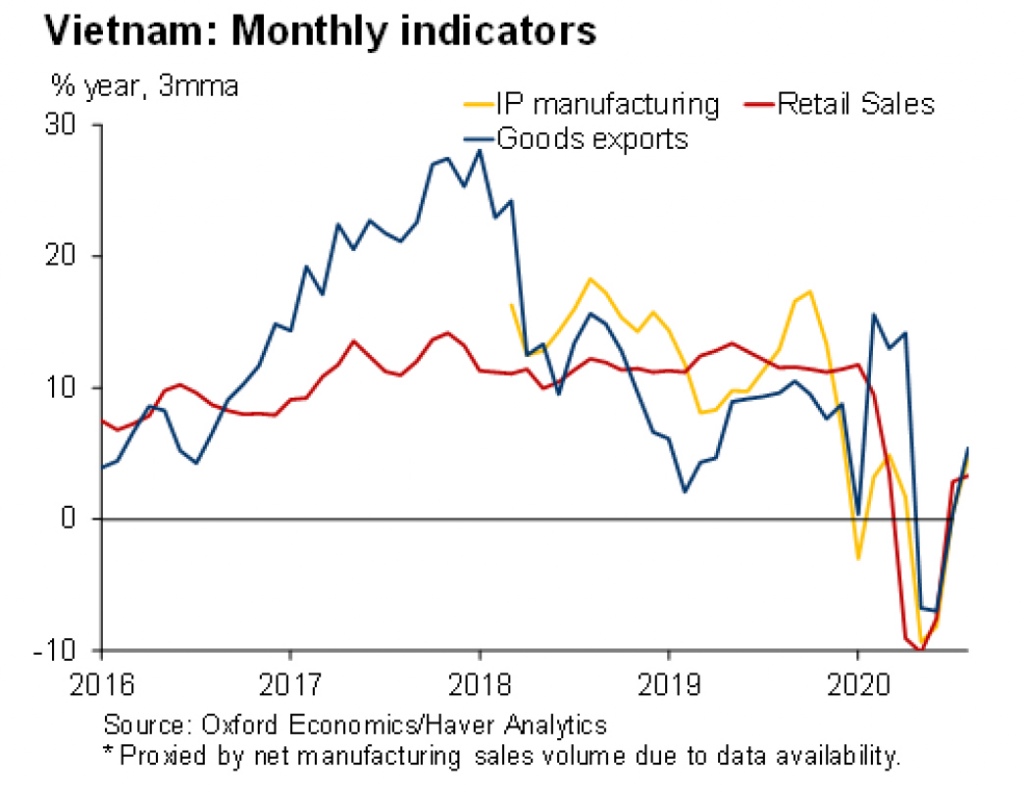 The improvement in mobility has been more subdued in Cambodia, likely due to the outsized impact of garment factory shutdowns and a plunge in foreign visitors. Indeed, tourism (directly and indirectly) accounts for around 26% of GDP, higher than in other countries in the group (Figure 5).

Figure 5: Cambodia to be the hardest hit from a plunge in tourist numbers 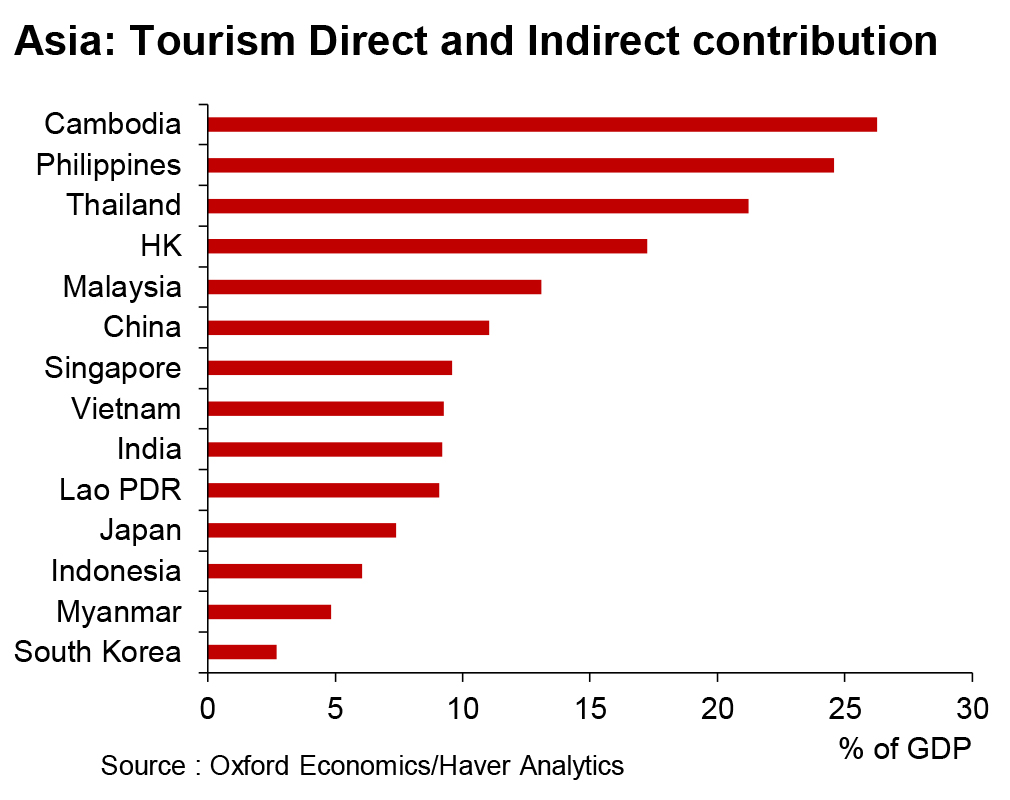 Investment under pressure in the short-term, but Vietnam expected to see a pick up soon

Investment is a key driver of growth among the CLMV countries with FDI inflows an increasing source of external financing. While central banks have eased monetary policy through a mix of interest rate and reserve ratio cuts and soft loans, we expect investment to come under severe pressure.

In Vietnam, FDI inflows fell 15% from January to June. However, we expect FDI inflows to pick up over the second half of the year due to the successful containment of the virus, in addition to its favourable labour dynamics and proximity to China.

Renewed US-China tensions and the ratification of the EU-Vietnam Free Trade Agreement are also boosting Vietnam’s attractiveness as an FDI destination in the short and medium term. While other CLMV countries are also likely to benefit from production relocating out of China, we see some headwinds in the short-term.

In Cambodia, the textile industry has been a key beneficiary of strong FDI inflows over recent years. But after reaching record levels in 2019, we expect FDI inflows to fall sharply this year and the recovery into 2021 to be muted amid weak global demand for apparel and the partial withdrawal from the “Everything but Arms” scheme with the EU.

For Laos, meanwhile, China has been a key source of investment for infrastructure projects. But given its own fiscal constraints, a China slowdown could see new projects delayed or cancelled. The risk of sovereign default has also risen amid falling foreign reserves, dimming the investment outlook.

In Myanmar, the opening up of sectors to increased foreign ownership has improved the investment environment. However, political risks ahead of the November elections and possible US and EU sanctions are likely to dampen FDI inflows.

Lockdowns in China and globally have had a severe impact on manufacturing and exports among the CLMV countries. The textile industry has been particularly hard hit. Factory closures in China in the first quarter severely affected the supply of apparel material as more than 55% of inputs for garments made in Cambodia, Myanmar and Vietnam are from China.

The slump in external demand has also led to cancelled orders. We expect this to have a larger impact on Cambodia given its high dependency on exports, 66% of which are generated by apparel

Vietnam is also heavily dependent on exports and disruptions to Chinese intermediate goods production in the first quarter did take a toll. However, given the relatively quick restart of activity, easing in supply chain disruptions, and relatively solid demand for electronics that will mitigate weaker demand for apparel goods, we expect exports to recover over the second half of 2020 and into 2021.

Still, the external outlook remains challenging. After an initial post-lockdown bounce in the third quarter, demand may lose momentum as fiscal support measures in countries such as the US and the EU fade.

Moreover, we expect services exports to remain a drag on recovery across all countries as travel restrictions and border closures are likely to remain in place for the foreseeable future.

Data trends signal that activity is normalising across the CLMV bloc, although we expect the path of recovery to vary. Despite the re-introduction of some restrictions we expect Vietnam to outperform‑growing 2.3% this year—with exports and investment both expected to surpass other CLMV economies.

We forecast Myanmar, which is more reliant on domestic demand and less exposed to tourism, to grow 1.9%. However, November’s general election is a risk to our projected recovery in investment.

We expect GDP in Laos and Cambodia to contract this year. Cambodia, in particular, is likely to be the worst hit given its high dependence on tourism and the partial withdrawal of EBA trade privileges.

For the group, we expect GDP growth to bounce back to 7.8% in 2021 in our baseline scenario.

A key risk to this baseline forecast is a second wave of infections, which can adversely impact growth. Based on our latest Global Scenarios, if there is a second wave of infections in the fourth quarter of 2020 and first quarter of 2021 we would expect the global economic recovery to falter amid renewed global lockdowns and financial market weakness. Lower global trade would stunt our projected recovery in exports across the group and could see CLMV GDP growth fall on average 0.1% in 2020 and 1.9% in 2021, versus our baseline forecasts of 1.9% and 7.8% respectively.

Overall, the pandemic will cause a sharp slowdown in growth across the CLMV group. However, in the absence of a second wave of infections, growth is expected to improve over the second half of this year and into 2021 as global economic activity normalises and investment picks up.