Home People & Planet Obesity: The unfolding of an epidemic

The share of obese people has been increasing markedly, even in poorer countries, a trend likely amplified by the pandemic-led lockdowns. Combined efforts are needed to support healthier lifestyles
02.08.2022
Michaela GrimmSenior Economist at Allianz Group
Arne HolzhausenHead of Wealth, Insurance and Trend Research at Allianz SE

The prevalence of obesity could further rise in the future. Photo by AllGo on Unsplash.

The combination of increasingly sedentary lifestyles and the increased consumption of high-calorie food has led to a rising share of overweight and obese people worldwide. The World Health Organization (WHO) estimates that more than 650 million adults are obese. The differences between and within the regions are, however, very pronounced. In North America, North Africa and the Middle East, as well as in Mexico, Argentina, Australia and New Zealand, between 30% and 40% of the population are obese. In Western Europe, the shares range between 20% and 25%, while in most Asian and African countries they are still below 10% (see Exhibit 1).

Exhibit 1: Marked differences in the prevalence of obesity 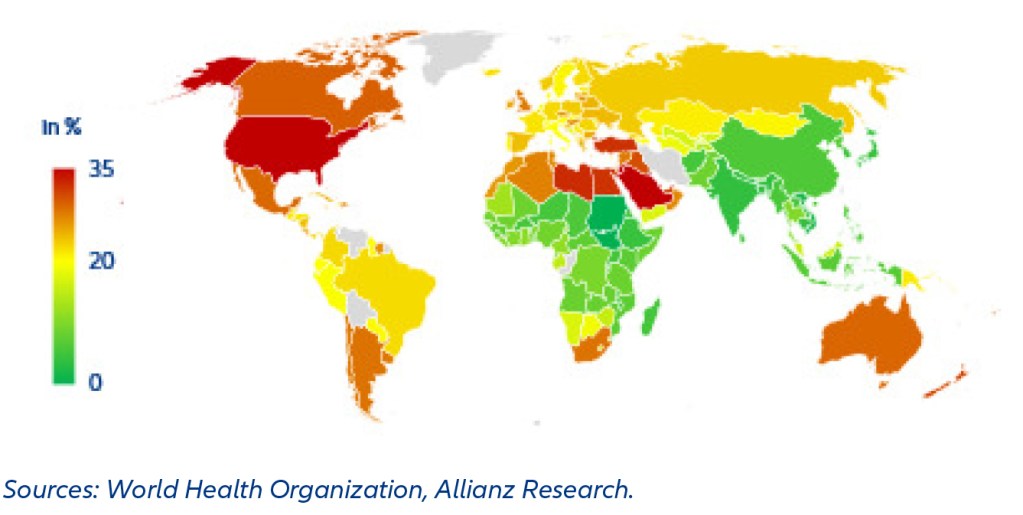 Current trends in the prevalence of obesity point towards a rising trend. The available data suggest that COVID-19 amplified the trend as the lockdowns reduced the possibilities for physical activity, leading to an increase in the average weight and thus the average BMI in most countries. The highest weight gain was reported among people younger than 40 years. In Germany, for example, an average weight gain of 1kg was reported, implying an increase of the average BMI from 25.9 to 26.4.

Climate change and urbanisation could also drive up the prevalence of obesity in the future, as higher outside temperatures caused by climate change tend to prevent outdoor physical activities, while extreme weather conditions could lead to higher prices of fruits and vegetables, making a healthy diet unaffordable for an increasing share of the population. The current food price inflation gives a foretaste of the expected future developments. The urbanisation trend could amplify the epidemic, as the average BMI of populations living in urban areas is in general higher than that of the rural population, likely due to lower physical activity levels and less healthy diets due to the availability of take-away food for example.

Social factors and traditions might add to the prevalence of obesity as well since there are also striking differences by gender between regions. While in most western societies the prevalence of obesity is higher in the male population than in the female population, the opposite pattern is observed in most African and Muslim countries, where physical activity for girls could be limited by social traditions.

However, the most alarming factor is the increasing prevalence of obesity among children and adolescents. In 2016, 10% of all 10-year-old boys were obese, up from 6% in 2000, and 7% of all girls, compared to 4% at the turn of the century. The prevalence of children who are overweight has also increased markedly: 24% of all 10-year-old boys and 20% of girls in this age were overweight, compared to 17% and 14% in 2000. In our analysed countries, the number of overweight children and adolescents increased from 42.8 million to 100.4 million in this time period (see Exhibit 2).

Exhibit 2: Marked increase in the prevalence of overweight and obesity among children and adolescents 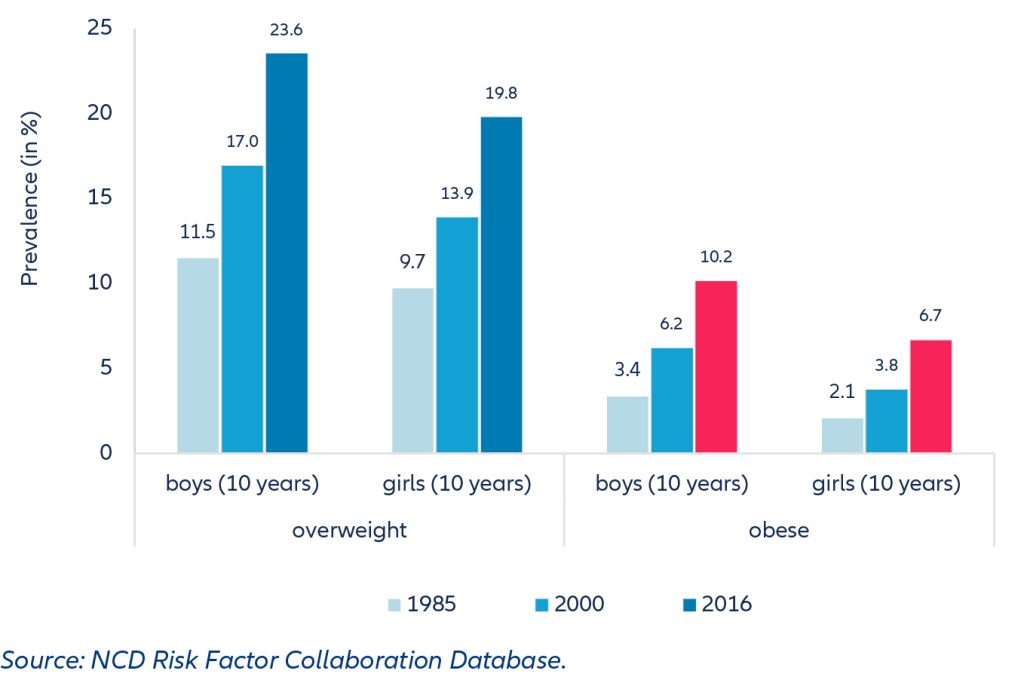 Obesity is related to severe health risks. Obese people have up to 80 times higher risk of developing type 2 diabetes and a markedly higher risk for suffering from coronary heart disease, strokes, certain forms of cancer and osteoarthritis compared to normal-weight peers for example. COVID-19 put this fact into the spotlight as patients with a Body Mass Index (BMI) of 30 and higher had a markedly higher risk of hospitalisation, serious illness and death than normal-weight COVID-19 patients.

This implies not only a restriction of the quality of life of people suffering from obesity, but also higher direct health expenditures and indirect costs due to losses in economic productivity due to related illnesses. It is estimated that these costs add up to €1.8 trillion per year or 2.8% of global GDP. If there is no reversal of the obesity trend, health systems will not only have to cope with additional costs due to aging societies but also with a heavy additional financial burden stemming from obesity.

Obesity could account for 8.1% of total health expenditure by 2032, equivalent to €1.2 trillion

To calculate the additional health costs caused by obesity we added an obesity factor in our health expenditure model by assuming the average health costs for an obese person are 30% higher than for a non-obese and by developing three scenarios about the future development of the prevalence of obesity based on WHO, NCD and UN data as well as our GDP forecasts.

To calculate the future trajectory of health expenditure, we make two major assumptions: First, we assume that health costs per capita are driven by nominal GDP per capita, reflecting the close correlation of both factors (see Exhibit 3). 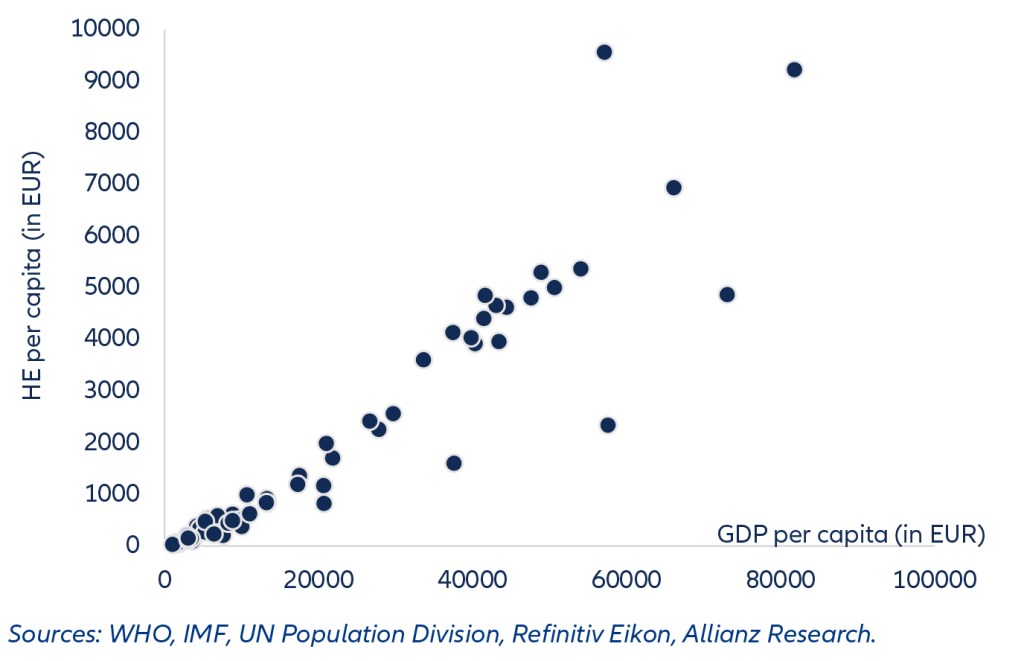 Exhibit 4: Marked differences in the development of the prevalence of obesity 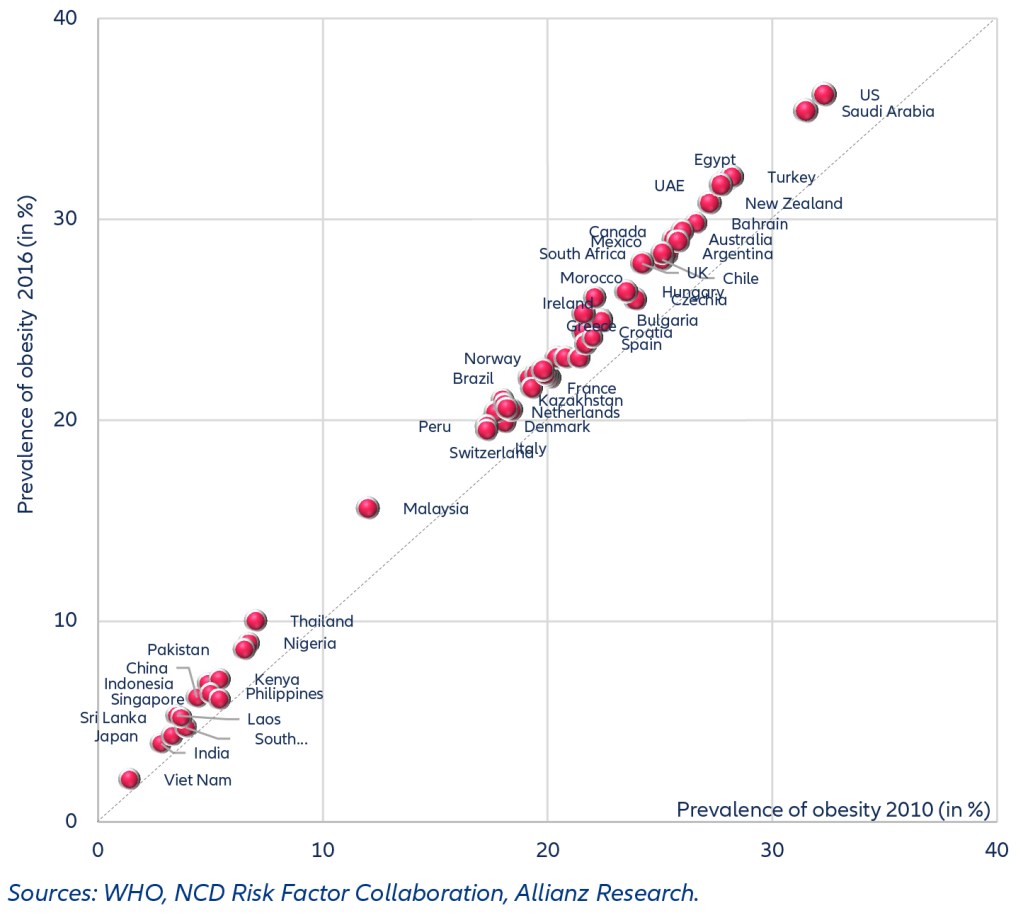 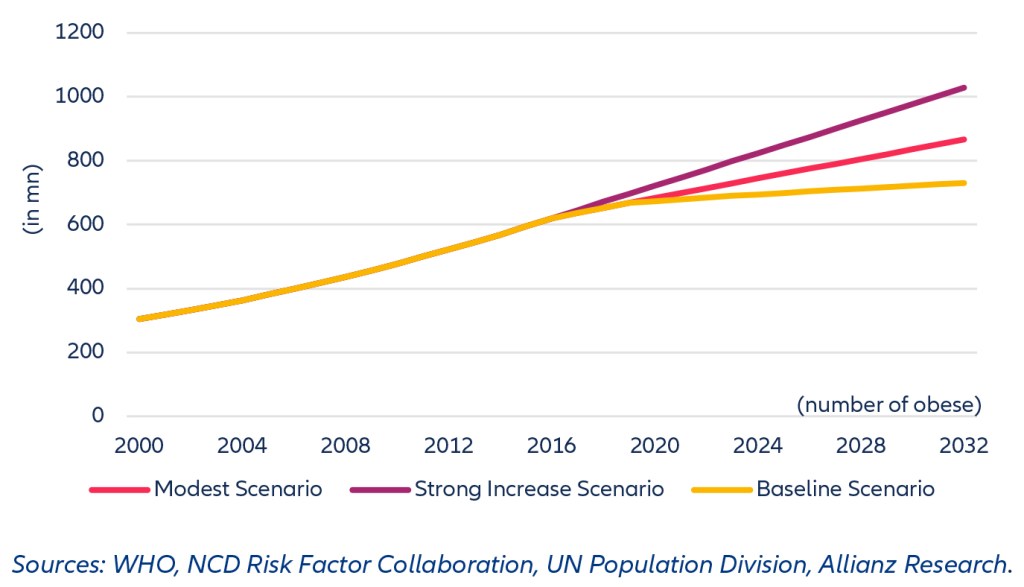 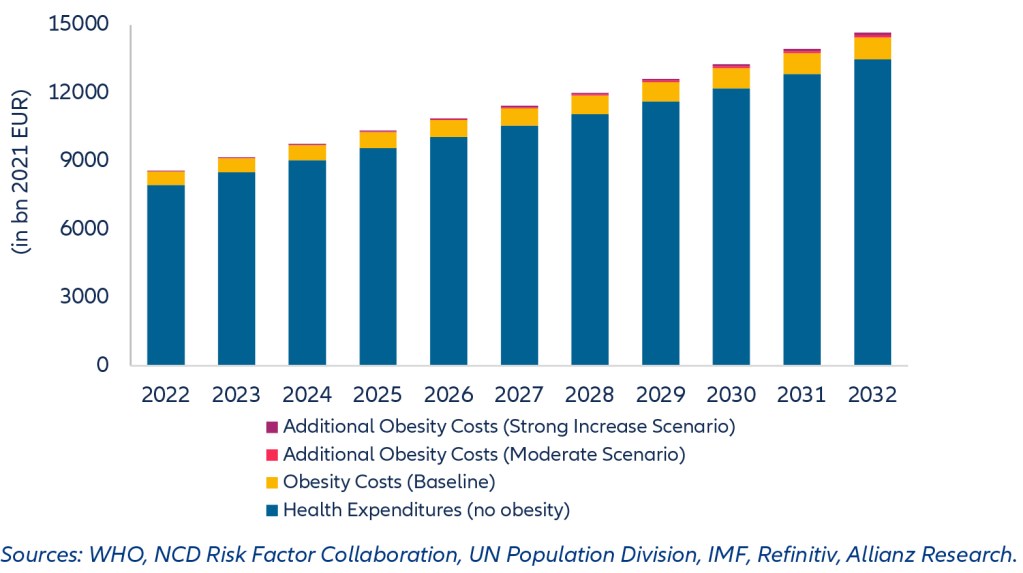 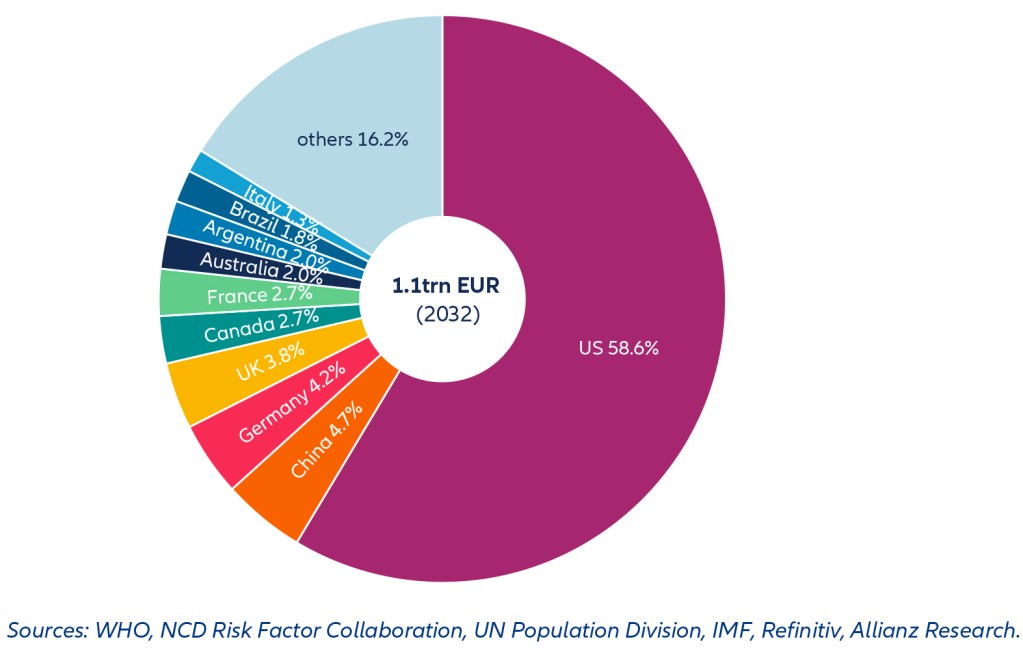 The aging effect will still be rather weak due to the still modest pace of aging in the next decade. Only in six countries, namely China, Lebanon, Saudi Arabia, South Korea and Thailand, will the average annual 10-year growth rate of health costs outpace average nominal GDP growth by more than 1 percentage point due to shifts in the age structure. However, the aging effect will be felt more markedly in the long run, especially if there is no further increase in the average number of healthy life years, which makes the fight against the obesity epidemic even more important.

What does this mean for policymakers?

Against this background, combined efforts are needed to support healthier lifestyles, create lasting behavioural change in diets and encourage regular exercise. The recommendations range from the taxation of sugary beverages and snacks to the use of health apps, insurance tariffs rewarding healthy behaviour and changes in investor behaviour.

In fact, more than 30 countries have already imposed taxes to reduce the consumption of sugary drinks, including Australia, Canada, Chile, Colombia, France, India, Italy, Malaysia, Mexico, Saudi Arabia, South Africa, Thailand, the UAE, UK, some regions in the US, French Polynesia and Nauru. However, according to the latest available data, these measures have had only a limited effect. In Mexico, for example, not only has the average BMI of adults increased but also the share of obese and overweight children and adults.

Considering that many households simply cannot afford to buy healthier food, the reduction of taxes on vegetables, legumes and fruit might be more promising, especially against the background of the current food price inflation and expected price increases due to climate change. Subsidies for canteen food in schools, kindergartens or nursing homes to provide higher quality food could have the same effect, taking into account that for many children these facilities provide their main meal of the day.

However, nutrition is only one side of the story; more exercise is the other. Many companies already encourage their employees to be more active by offering subsidies for fitness studios, bikes, yoga classes, to name a few. However, it is not enough to offer these measures; employees also have to take them up without feeling forced to do so. Another challenge is to encourage children and already overweight or obese adults to exercise more. Health apps and health insurance tariffs that reward a healthy lifestyle are also a means of choice to support a healthier lifestyle. However, recent studies suggest that health apps are not yet a stand-alone solution and cannot fully replace personal medical advice and support. This holds especially true, with respect to lasting changes in dietary habits. Furthermore, they still appeal especially to younger age groups and to people who already tend to have an active and health-conscious lifestyle.

So far, all these efforts have had only modest success, to put it mildly. The fight against obesity should therefore take a leaf out of the climate action book, harnessing the power of investors in driving change. In the future, alongside carbon footprints, food producers and processors might be encouraged to disclose their “sugar footprint”, too, with the clear intention to lower it over time. Investors could require such “sugar pathways to net-zero” and steer their investments accordingly. In the end, there is nothing else more sustainable and socially relevant than healthy food. 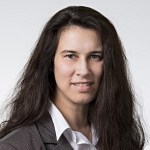 Michaela Grimm joined Allianz Group in 2000, where she held various research positions. Since 2009 she has been working in the Economic Research department, focusing on insurance market developments in emerging countries and the impact of demographic change on the private sector, social security systems and financial markets.

Head of Wealth, Insurance and Trend Research at Allianz SE

Arne Holzhausen is head of Economic Research’s Insurance, Wealth & ESG team at Allianz SE, Munich. He is responsible for analysing and forecasting global insurance and pension markets, monitoring worldwide private assets and liabilities and assessing the impact of ESG issues on economic and capital market outcomes. He regularly writes on economic trends impacting insurance including low yields, regulation, technology and demographics. Prior to joining Allianz in 2009, Arne spent almost eight years with Dresdner Bank’s Economic Research. From 1995 to 2000, he was Assistant Professor at the Centre for East Asian Studies of the Free University of Berlin.