The political implications aside, the coup could not have come at a worse time for an economy that was already struggling to cope with the impacts of the pandemic
16.02.2021
Sian FennerLead Asia Economist at Oxford Economics

NLD supporters in Bangkok protest outside the Myanmar Embassy against the military coup in Myanmar. Photo by Shutterstock.

After a decade of democracy, Myanmar’s military staged a coup on 1 February, ousting the newly re-elected National League for Democracy (NDL) party and announcing a one-year state of emergency and the replacement of democratically elected President Win Myint with Myint Swe, a former general.

The coup follows rising tension between the government and the military over claims by the military that the NDL’s landslide win during the November election was marred by fraud. These claims have been rejected by the Election Commission and diplomatic agencies monitoring the election process.

We expect the increase in political risk and business uncertainty to lead to a slower recovery in investment and FDI inflows, with the possibility of US sanctions also a risk.

Using two episodes of elevated political risks as benchmarks—Myanmar’s transition from the quasi-military government in 2016, and Thailand’s military coup in 2014—we estimate that the coup could lead to a 2 percentage point drop in FDI inflows as a share of GDP and a delay in the investment recovery until 2022. All else being equal, this could lower GDP growth this year to around 2% versus our pre-coup forecast of 4.1%, and significantly lower than the 7.6% per annum average of the past decade.

A key economic risk looking ahead is that the military postpones the elected government’s reform agenda as this would hinder Myanmar’s ability to fully reap the benefits of its low-wage advantage. It will also result in potential GDP growth falling short of our projected 6.2% per annum growth over the next decade. 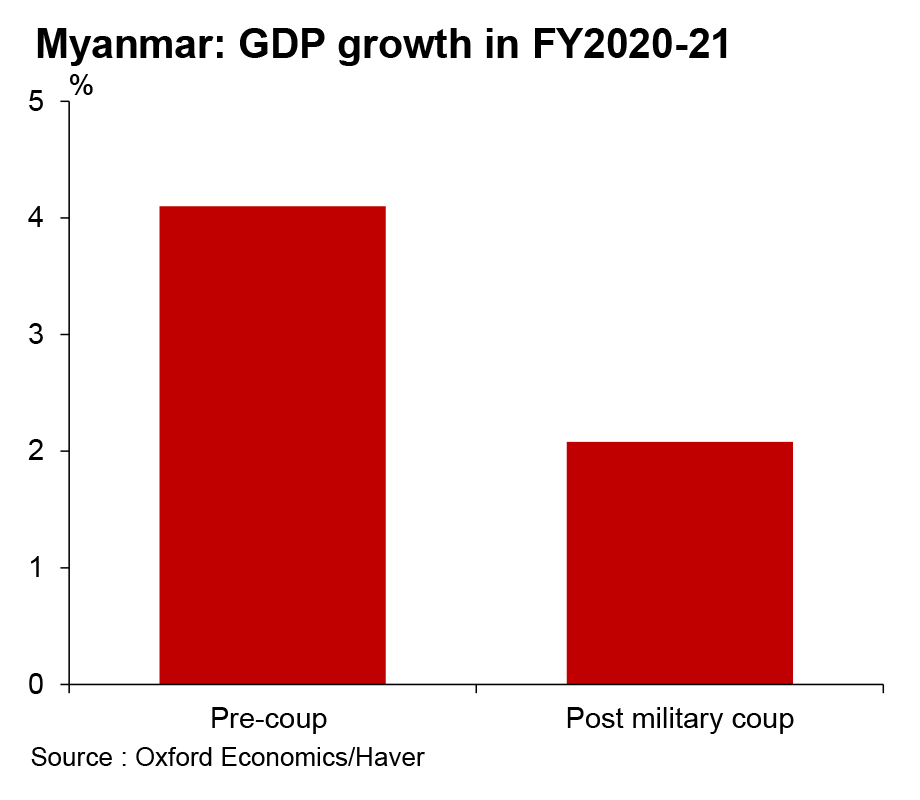 At the time of writing, the coup has been peaceful and we do not expect it to lead to large social unrest or protests, given concerns over COVID-19. However, we do expect it to weaken consumer and business confidence, with heightened political uncertainty also set to dampen our projected recovery in investment and economic growth this year.

Indeed, investment has been a key driver of growth in Myanmar, accounting for around 34% of GDP in 2019, up from 23% a decade ago. Moreover, FDI inflows as a source of investment have been rising, particularly in mining and manufacturing (Exhibit 2).

Exhibit 2: FDI inflows have been rising 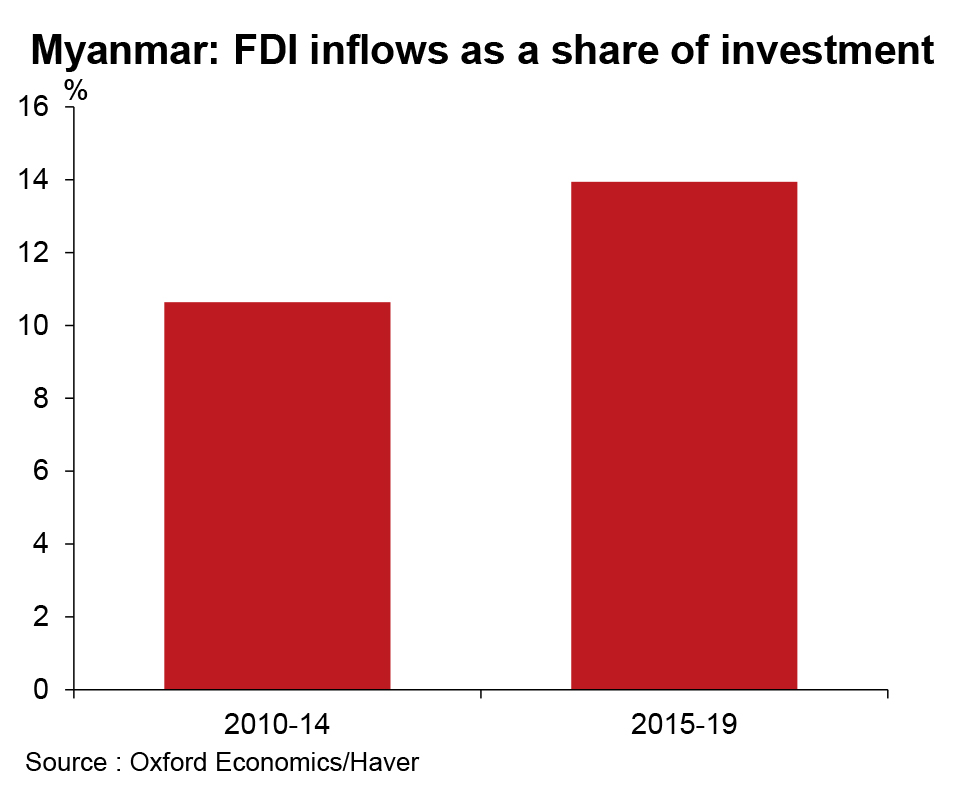 Investment and FDI inflows into the country have already been hit hard by the global pandemic. In October and November, the first two months of FY2020-2021, approved FDI inflows were around 20% lower than a year ago.

According to the Directorate of Investment and Company Administration (DICA), a further 23 investment proposals worth $3.5 billion (or around 60% of the total in FY2019-2020), primarily in the manufacturing sector, were in the pipeline for approval. These are now in doubt, with projects likely to be delayed at best, or possibly cancelled.

The weaker outlook for FDI inflows and investment comes at a time when Myanmar’s economic recovery already faces headwinds from an outbreak in COVID-19 infections, which is likely to lead to further social distancing measures. The transport of goods exports is also likely to be disrupted as borders are closed with its neighbours, notably Thailand and China, which accounted for over 50% of goods exports in 2019 (Exhibit 3). 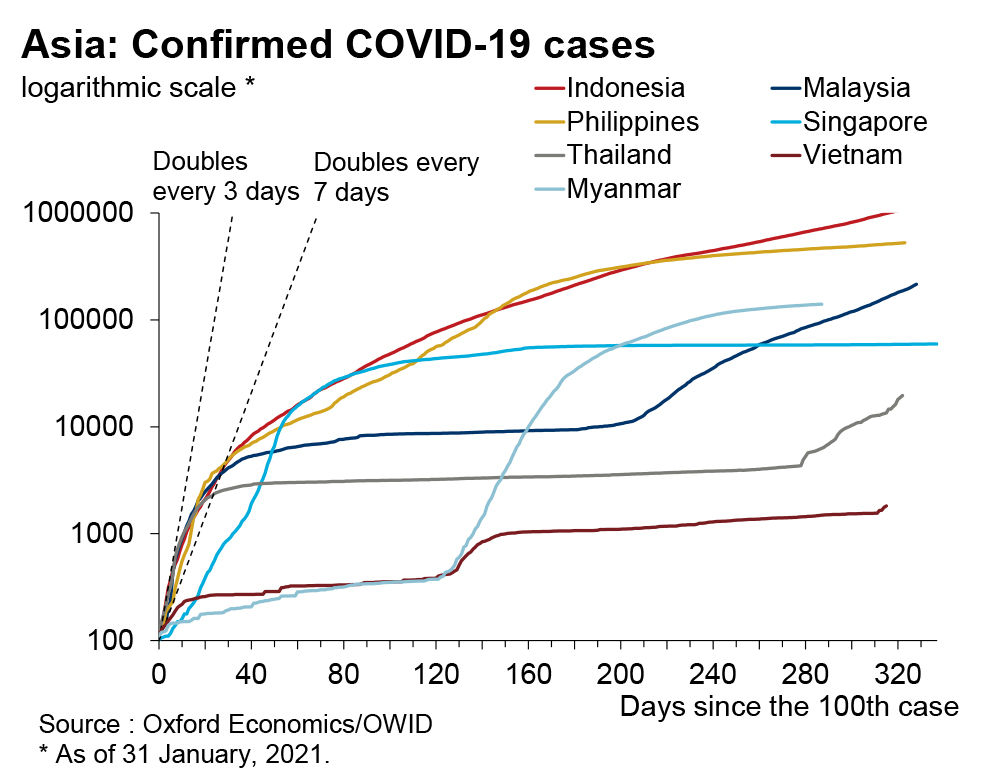 An added risk to Myanmar’s export outlook is that the military coup leads to US and EU sanctions. Indeed, the US has already stated that it opposes any “attempt to alter the outcome of recent elections or impede Myanmar’s democratic transition and will take action”.

The military coup does not only threaten the short-term outlook for investment and FDI inflows – it will also hamper medium-term potential growth, particularly if it results in the reform agenda being put on the back-burner.

As part of its second term, the NDL announced a series of reforms aimed at attracting more foreign investments in the next five years, including the liberalisation of the financial sector, lower corporate taxes and streamlining the investment approval process for “strategic infrastructure projects”.

As previously reported, our robust outlook for Myanmar’s medium-term growth prospects assumed investment would increase at a healthy pace, aided by relatively high domestic savings and FDI inflows. A slower reform agenda would hinder Myanmar’s ability to fully reap the benefits of its low-wage advantage and would see potential GDP growth fall short of our earlier projections.

The coup comes at a particularly challenging time for Myanmar, which is already grappling with a growing number of COVID-19 cases and poor infrastructure to deal with it. Particularly given its timing, it could have serious long-term implications on Myanmar’s socio-economy.