The pandemic has increased malnutrition rates in many parts of Asia and the Pacific. Direct food assistance to the poor and programmes that benefit farmers are being used to address the problem
12.07.2022
Stefan SchipperSenior Statistician, Economic Research and Regional Cooperation Department at the Asian Development Bank
Sean CrowleyFreelance writer
Karen FirshanStatistician

The pandemic pushed millions of people in Asia-Pacific into hunger and malnutrition. Photo by Jimmy Chan on Pexels.

The COVID-19 pandemic has had a devastating impact on the world’s economy, triggering a recession that has severely affected food security and nutrition for millions of people. The UN’s Food and Agricultural Organization (FAO) estimates that between 720 million and 811 million people faced hunger in 2020, as many as 161 million more than in 2019. The Asia and Pacific region has been particularly badly hit.

Since the start of the pandemic in early 2020, food prices have risen consistently in the region. According to the World Food Program (WFP), unlike the 2008 food crisis, which was driven by disruption in global markets, the COVID-19 food crisis was caused by soaring unemployment and reduced product markets.

The FAO estimates that the undernourished population in Asia increased from 361 million to 418 million between 2019 and 2020, raising the prevalence of undernourishment from 7.9% to 9.0%. South Asia has been most severely impacted, accounting for 89% of the increase. The rise in acute food insecurity will roll back much of the progress over the last few decades in women and children’s nutrition. Increased numbers of stunted children will compromise their future human capital and economic productivity.

Our research shows that while there has been a welcome decrease in undernourishment in some countries in Asia and the Pacific, there has been an increase from 2017-19 to 2018-20 in 11 developing countries. The highest increase was 2.2 percentage points in Afghanistan. Other countries in the region that saw notable increases in undernourishment in the same period included India, Sri Lanka, Pakistan, and Georgia.

While Georgia initially experienced low rates of COVID-19 infection, cases rose dramatically throughout the last quarter of 2020 and into early 2021. The pandemic had a significant impact on the Georgian economy, resulting in increased poverty and unemployment. There was a corresponding rise in malnutrition, with undernourishment rising from 8.1% of the population in 2017-19 to 8.7% in 2018-20.

Some lower income economies saw greater increases in undernourishment, the data show. Pakistan’s rate rose from 12.2% of the population in 2017-19 to 12.9% in 2018-20. Pakistan faced the dual challenge of responding to the COVID-19 health crisis while mitigating the widespread economic devastation that it caused. 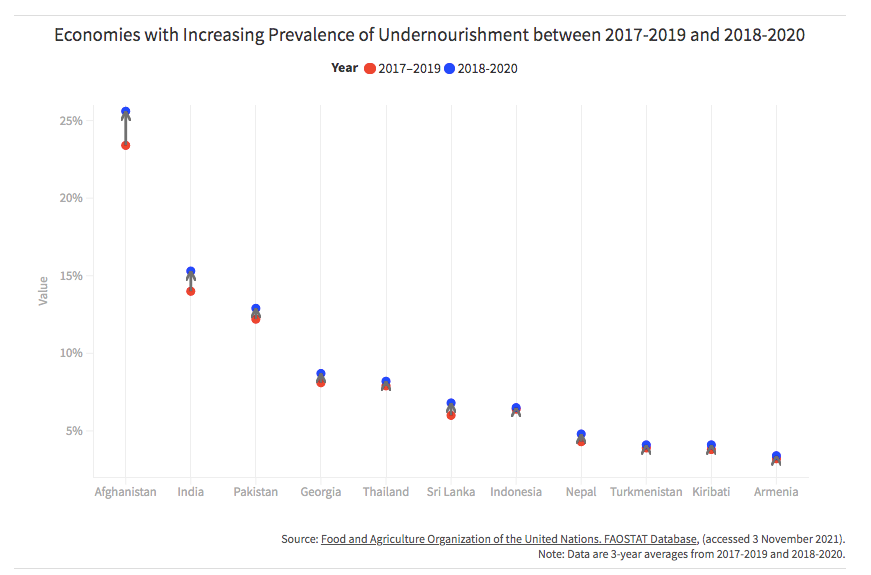 In May 2020 a survey of farmers in Pakistan’s Punjab Province showed 33% of respondents had experienced wage drops and reduced non-farm earnings because of COVID-19. Shrinking incomes and households swollen by returning relatives led to reduced non-food expenditure (11.0%) and lower food consumption (9.8%) among farmers, the survey found. COVID-19 only partially explains the malnutrition increase.

In 2020 the country battled to cope with extreme winter snowfall, locusts and monsoon flooding in a context where over a third of the population is already food insecure, according to the UN’s World Food Program.

The data suggest that countries that experienced significant increases in undernourishment in 2018-20 were already coping with complex food crises, of which the COVID-19 pandemic was a significant part, but clearly not the only factor. In some cases, natural disasters played a major role in driving up undernourishment.

To help alleviate the food crisis driven by COVID-19, many Asian economies implemented successful food assistance programmes in 2020 and beyond. In the Philippines, the Department of Social Welfare and Development distributed food packs as part of a programme aimed at the poor and vulnerable.

In the longer term, policy action to address rising food insecurity in Asia and the Pacific should focus on building resilient food systems. This can be achieved by helping farmers prevent, prepare for, and adapt to weather shocks. Investing in early warning systems such as spatial information technology and crop modelling, can help farmers anticipate extreme weather events and plan accordingly.

In 2019, timely information on floods in northern Bangladesh helped communities and the government prepare and secure necessary supplies, massively reducing economic losses. Food security issues are inexorably tied to agricultural policies. To provide nutritious food that is affordable for all, agriculture policy in the region will need to promote productivity growth while ensuring environmental sustainability.

The pandemic pushed millions of people in Asia and the Pacific into hunger and malnutrition, but there are examples of successful programmes and policies that can emulated to get more food onto tables in the region. 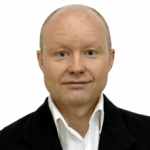 Stefan’s work includes building statistical capacity in ADB’s developing member economies and using new digital technologies to improve databases He also creates knowledge products, including statistical flagship publications. Prior to joining ADB, Stefan was a Statistical Officer at the EU’s Eurostat in Luxembourg. There he was responsible for business statistics and the preparation of reports. He was a Senior Economist and Statistician at the German Central Bank (Deutsche Bundesbank) in Germany responsible for general economic statistics. Stefan was a lecturer at the University of Applied Sciences Mainz in Germany. He started his career at HSBC Trinkaus and Burkhardt AG in Germany. 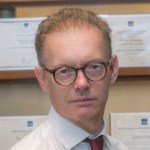 Sean was ADB's multimedia and web editor. Before joining ADB in 2010, he worked as communications specialist and multimedia journalist for UN-WIDER, IRIN, the BBC and the South African Broadcasting Corporation. 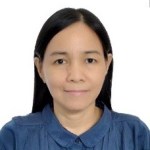 Karen is currently working as a consultant at the ADB’s Economic Research and Regional Cooperation Department. Prior to joining ADB, she worked as a statistician involved in production of official economic statistics at the Philippine Statistics Authority.