A man exits a subway in Tokyo. Several Asian governments have tightened restrictions recently amid a fresh spike in COVID-19. Photo by Dalelan Anderson on Unsplash.

A string of new COVID-19 outbreaks is weighing on the Asia-Pacific region’s economic recovery (Exhibit 1). Among Asia’s developed economies, the case load is low compared to other nations. But, amid low tolerance for the coronavirus, upsurges in Japan in April, Taiwan in May, and South Korea and Australia more recently have led to renewed anxiety and government restrictions.

Among Asian emerging market (EM) economies, following the crisis in India, there have recently been serious flare-ups in Thailand, Indonesia and, especially, Malaysia (Exhibit 2). In China, small outbreaks led to stringent lockdowns and restrictions, as well as dampened confidence amid low tolerance for the coronavirus. 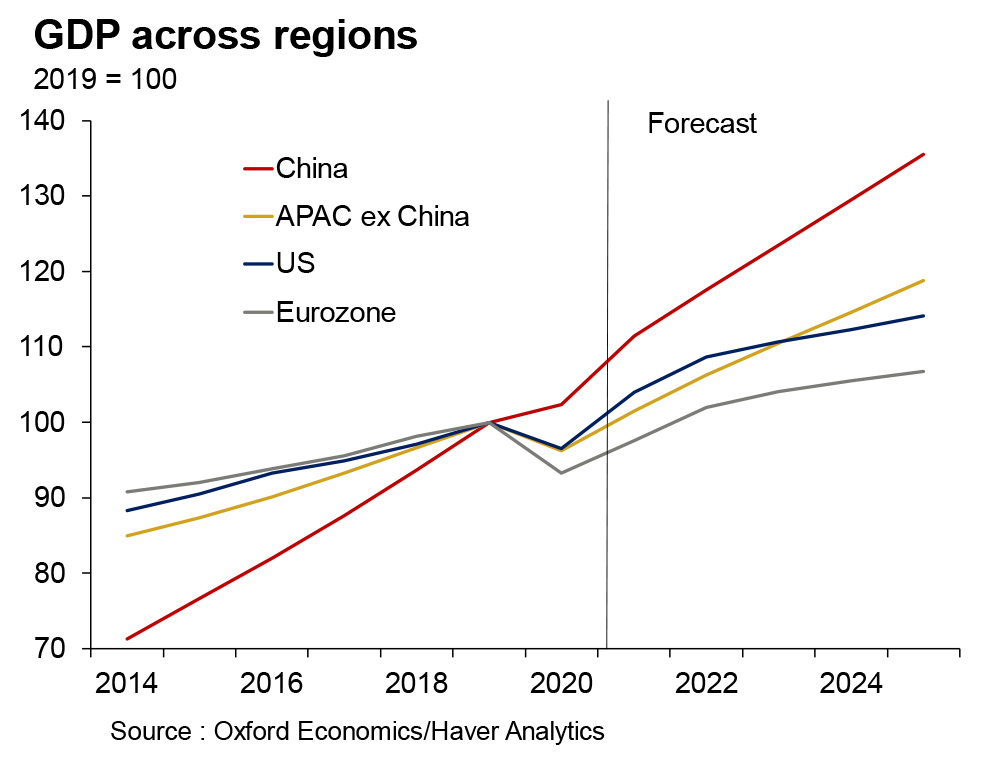 Low vaccination rates, combined with low tolerance to the virus in several places, leave many Asian economies vulnerable to COVID-19 setbacks. The US and Europe are now challenged by the especially contagious delta variant, first observed in India. Nonetheless, steady improvements in vaccination levels (Exhibit 3) have raised immunity in these countries. Governments there also tend to have a different approach to the coronavirus, generally aiming to contain the case load so that the health system can cope with it, rather than trying to supress it fully.

In all, numerous state governments in the US and countries in Europe have been easing restrictions and opening their economies recently amid improved confidence. As a result, while acknowledging the risks, we expect strong sequential growth in the second half of 2021 in the US and Europe. 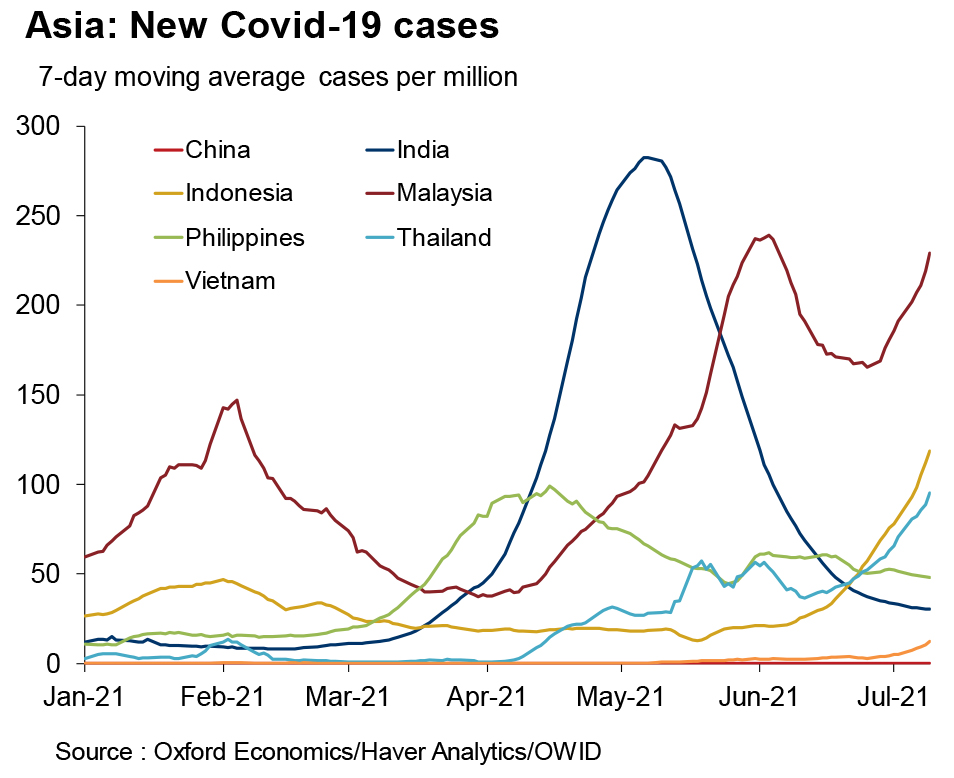 China and Singapore have also seen an impressive increase in vaccinations. The Singapore government now expects two-thirds of the population to be fully vaccinated by early August and intends to broadly continue easing restrictions and further opening up the economy accordingly. We project China to reach that level in late Q3 or early Q4. However, given China’s low tolerance to the virus, small outbreaks of COVID-19 have led to stringent local restrictions and lockdowns to fully eradicate it. In June, the Shenzhen port—the country’s third largest—was shut down temporarily. Indeed, China is not expected to open up its borders to non-citizens until sometime in 2022. 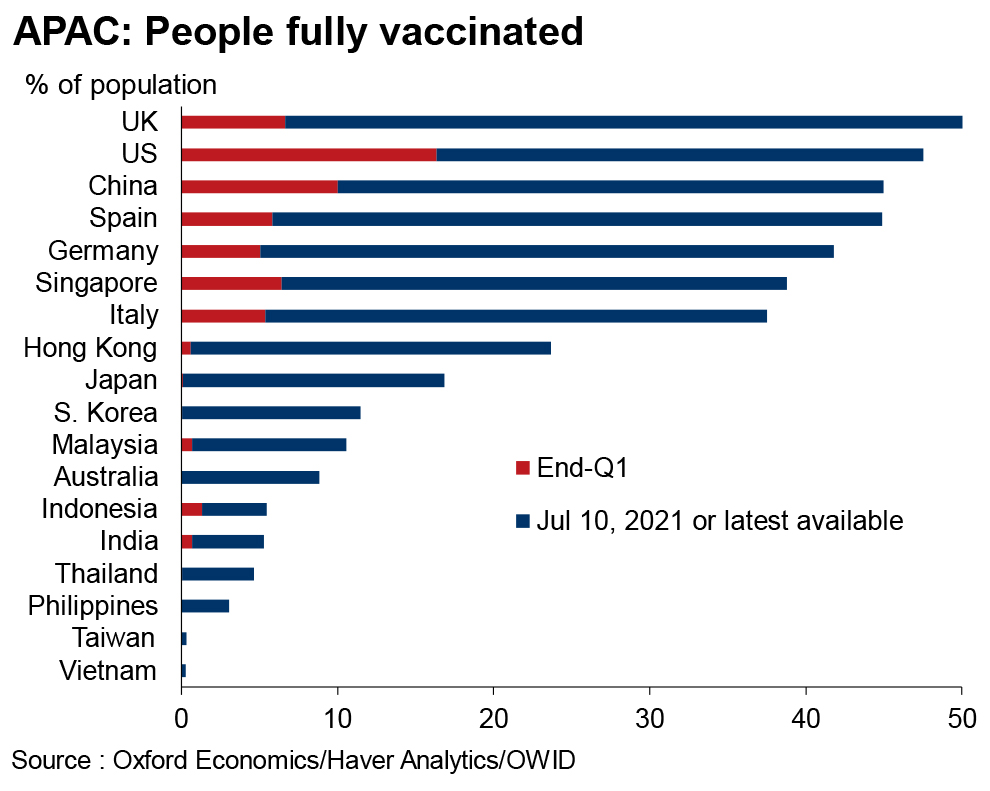 In most Asia-Pacific economies, significantly less than 20% of the population has been fully vaccinated, keeping them vulnerable to new COVID-19 outbreaks. Japan, South Korea, and, more recently, Malaysia and Australia have sped up inoculations (Exhibit 3). But they still have a long way to go.

Meanwhile, in India and the Southeast Asian countries other than Singapore and Malaysia, substantially less than 10% of the population has been vaccinated as of July 10.

Exhibit 4: Restrictions have been tightened, not eased 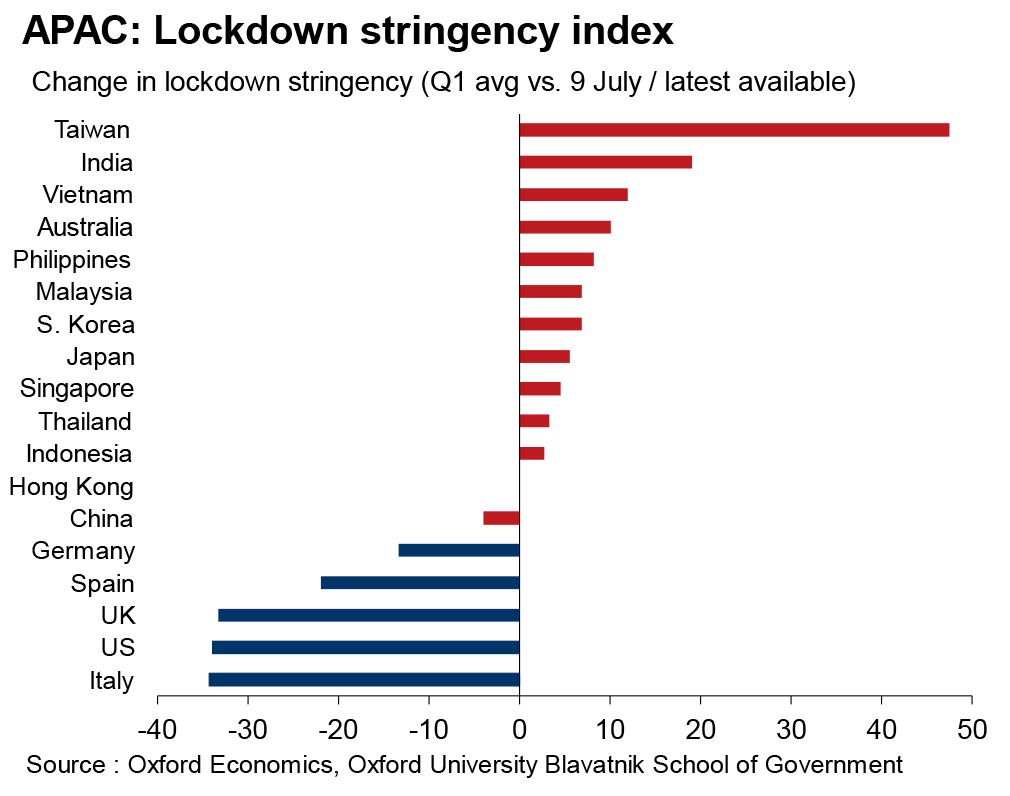 In this context, several Asian governments have tightened restrictions recently instead of opening the economy. While we have some concerns about the Oxford University Blavatnik School of Government lockdown stringency index, we think its evolution is generally useful in illustrating the direction of government restrictions. In the US and the European countries included here, restrictions have been eased since the end of Q1 (Exhibit 4). However, in Asia-Pacific economies they have generally been tightened in this period.

In Australia, Sydney is currently in the third week of a hard lockdown which we expect will be extended until at least August. In Japan, Tokyo re-entered a state of emergency on 12 July, which led to a decision to hold Olympic games without spectators. In South Korea, on 9 July, the government raised restrictions to the highest level for Seoul and its surroundings. Malaysia returned to a nationwide lockdown in June.

In Thailand, on 12 July, restrictions were tightened further in Bangkok and nine provinces with department stores closed and a curfew imposed. There is now serious doubt that the government will be able to meet its ambitious target of extending the ‘Phuket Sandbox’ quarantine free international travel arrangement to the rest of the country by October.

The Indonesian government recently tightened lockdown measures in areas including Java, the island with the largest population where the capital Jakarta is located, although the government is resisting a national lockdown.

One saving grace is that governments have generally learned from experiences in 2020, and the economic impact of recent restrictions and lockdowns has usually been not nearly as large as was the case last year. 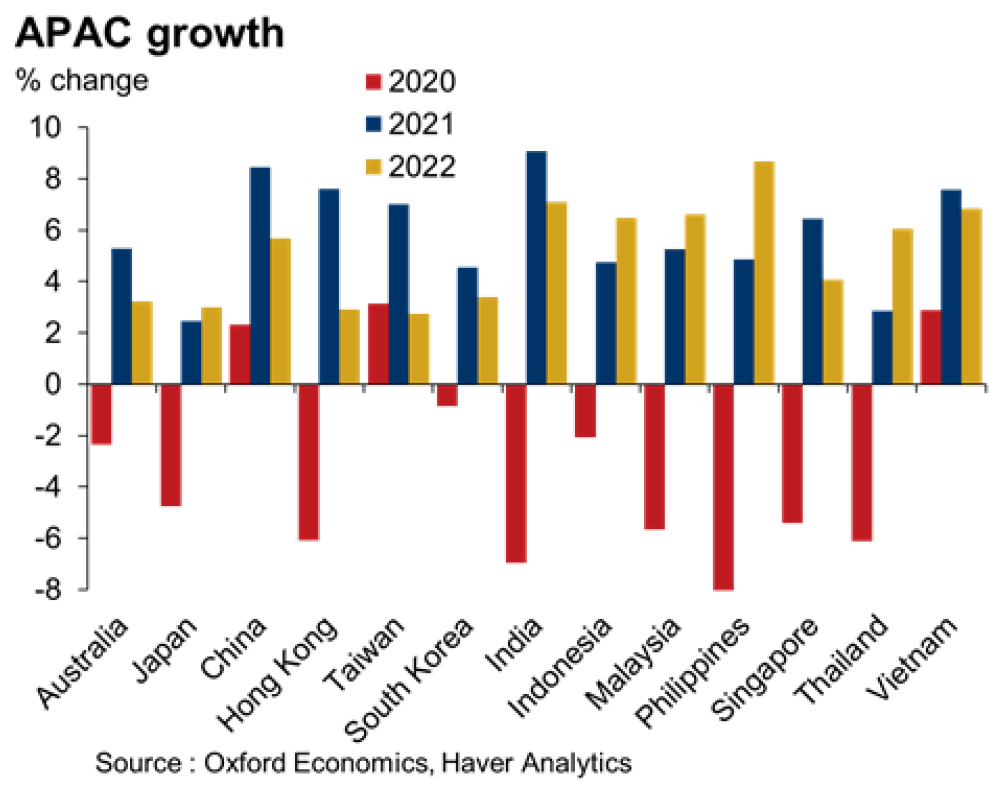 In any case, economic recoveries have often been bumpy and are being delayed. In the past three months we have scaled back our 2021 growth forecasts for China, India, Indonesia, Japan, Malaysia, Singapore, Thailand, the Philippines and Vietnam, even as we nudged up our expectation for global growth.

Indeed, we expect the Asia-Pacific region’s growth this year and in 2022 to be relatively subdued. Following the massive plunge in activity in most countries in the region in 2020, and with a strong global recovery in place, we forecast substantial growth in 2021 and 2022 in the region (Exhibit 5). However, our projection for growth in 2021 and 2022 for Asia-Pacific is relatively unimpressive. In 2018-19, Asia-Pacific ex-China grew 3% on average, 0.4 and 1.6 percentage points faster than the US and the Eurozone respectively. But we expect Asia-Pacific ex-China growth to average 5.1% in 2021-22, compared to 6.1% in the US and 4.5% in the Eurozone (Exhibit 1). 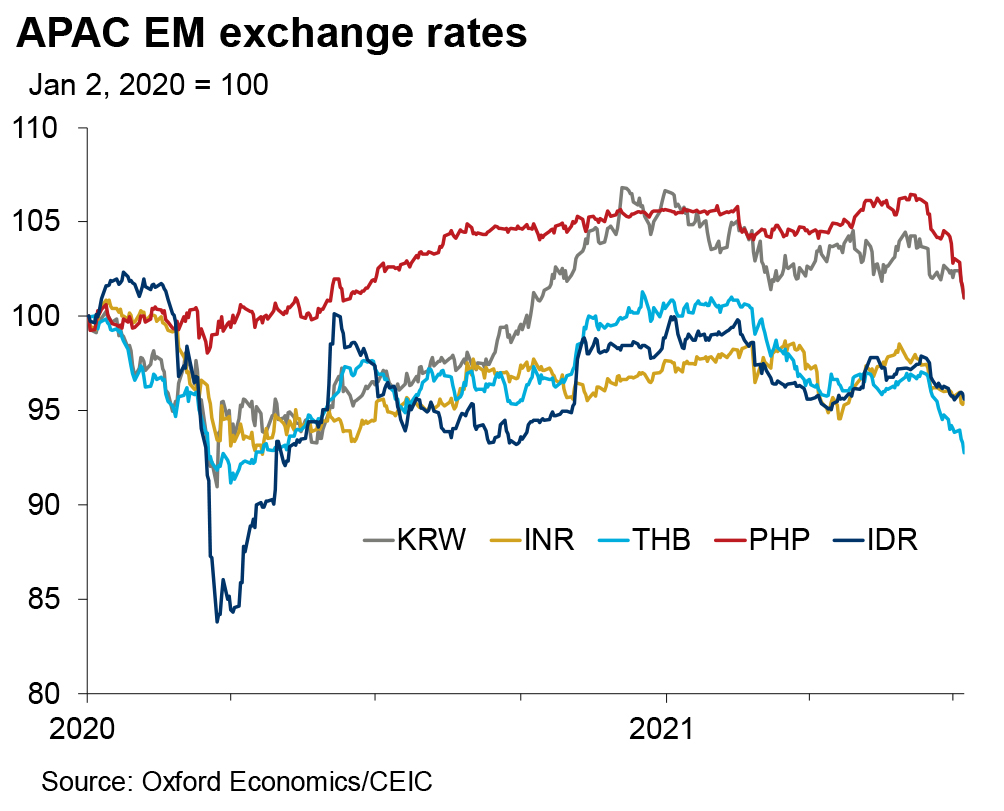 The COVID-19 setbacks and relatively unimpressive growth outlook in the Asia-Pacific, compared to the strong growth we forecast for the US, has also led to currency weakness, recently in the case of the Thai baht and the Philippine peso (Exhibit 6).

Exhibit 7: Light at the end of the tunnel 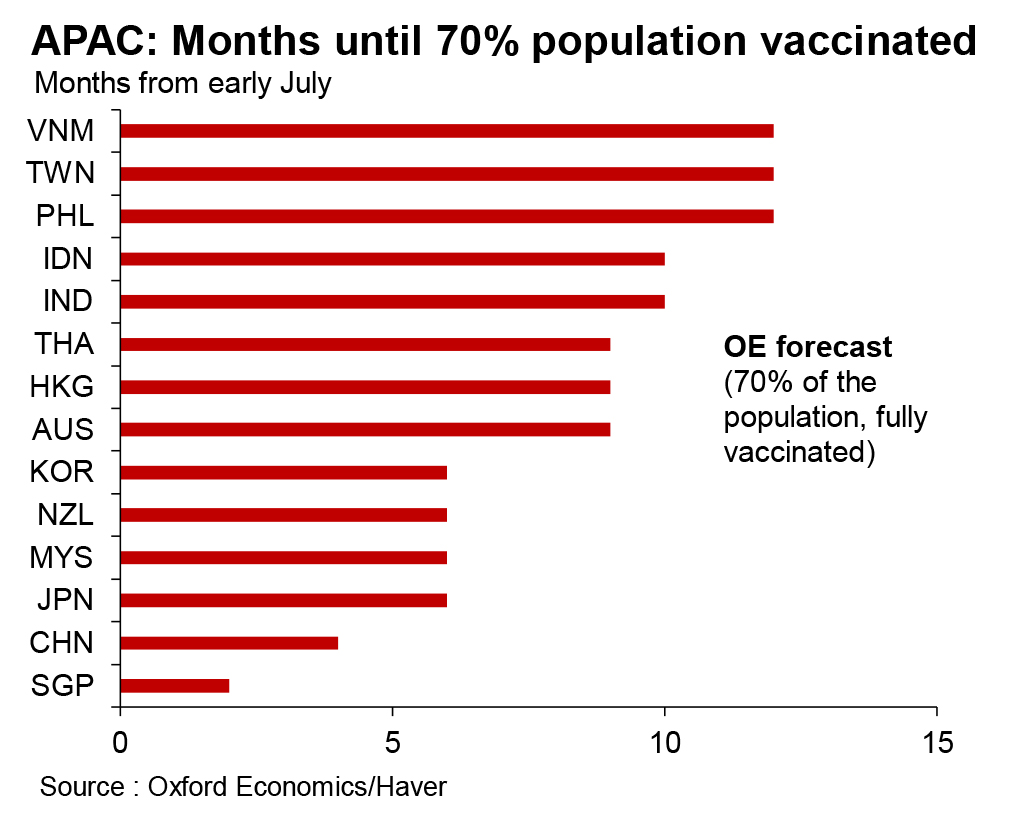 Fortunately, we project Asia-Pacific economies to eventually vaccinate 70% of the population—the level that the Singapore government sees as necessary to open up the domestic economy—and thereby become less susceptible to COVID-19 outbreaks (Exhibit 7).

We expect Singapore to reach that threshold in August, and Vietnam, Taiwan and the Philippines to follow by mid-2022. COVID-19 challenges and vulnerabilities notwithstanding, we remain relatively optimistic about medium-term growth in Asia.