Apart from investments, for Japan to reach carbon neutrality by 2050, it will need to transform its major sectors
14.09.2021
Unravel editorial team

Japan's major sectors will need a rethink to achieve its emissions targets for 2030 and 2050. Photo by Shutterstock.

Japan is among the top 10 largest greenhouse gas (GHG) emitters in the world. It ranks sixth after China, the US, the EU, India and Russia. To put this into perspective, Japan emitted 1,230 metric megatonnes of carbon dioxide equivalent (MtCO2e) in 2017.

And the situation has worsened each year post that. Japanese Prime Minister Yoshihide Suga recently announced the country will reduce its GHG emissions by 46% compared to 2013 levels by 2030. To this effect, McKinsey in its recent report recommends how Japan can choose an optimal cost-effective pathway in achieving its net-zero target by decarbonising its major power consuming sectors.

Here’s the catch – Japan’s geographic location poses one of the biggest hurdles to renewable transition. Its deep coastal waters make it impossible to install offshore wind turbines, while its mountainous terrain limits open space needed for onshore wind and solar farms. Additionally, its megacities such as Tokyo, Osaka and Nagoya are densely populated, presenting spatial challenges in developing infrastructure for electric and hydrogen-fuelled vehicles. This is why the country is heavily dependent on fossil fuels to fulfil its energy needs.

Nevertheless, using two of its proprietary models, McKinsey recommends a “societally cost-optimal” pathway that has a discount rate of 4% for all investments. This recommendation will further assist Japanese policymakers and business leaders in achieving its net-zero emission targets of 2050.

To achieve its 2030 target of 46% emission reduction, Japan will need to eliminate about 500 MtCO2e. Exhibit 1 shows the building sector to be the fastest to decarbonise, reducing emissions by 55%, at a cost savings of $57 per metric tonne of carbon dioxide equivalent (tCO2e). Meanwhile, the industry sector will be the hardest to decarbonise due to its heavy dependence on high-temperature processes and carbon-intensive feedstocks. 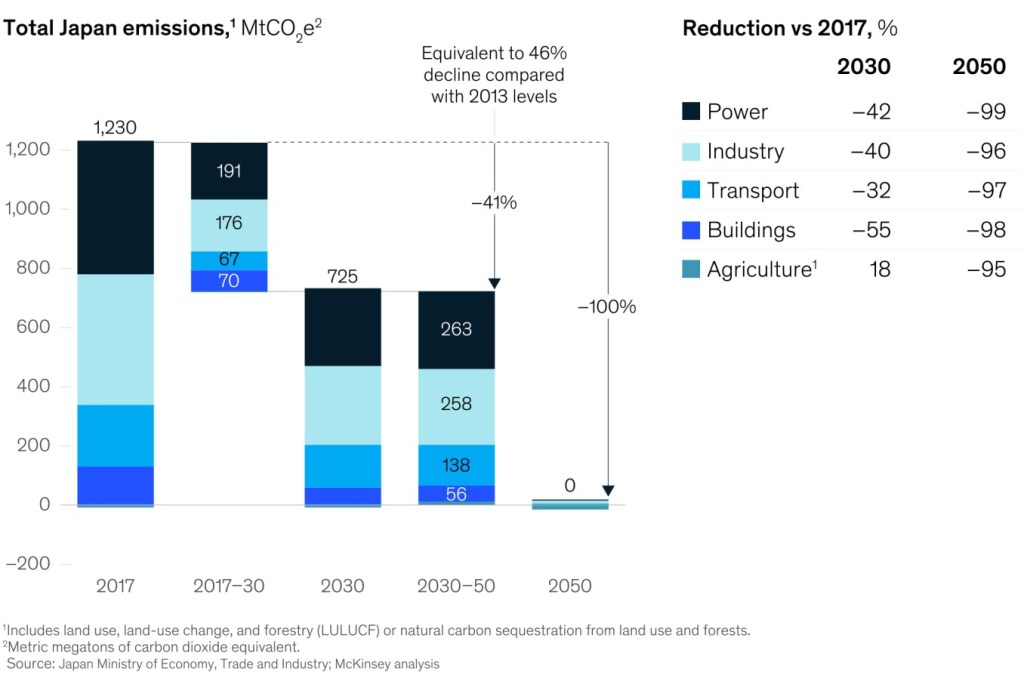 Reaching the 2050 goal of net-zero emissions is the hard part. Japan will need to adopt more expensive technologies. In the industrial sector, manufacturers will need to invest in deploying carbon capture, utilisation and storage (CCUS) technology or switch to hydrogen for mid- to high-temperature processes. If similar efforts are ensured by all other sectors, it will result in average abatement cost savings of $36 per tCO2e by 2050. Exhibit 2 shows how demand for oil and coal will subside, overtaken by renewables and clean hydrogen and ammonia.

Exhibit 2: Renewables and low-carbon hydrogen and ammonia will become the major primary energy supply, but natural gas will remain significant 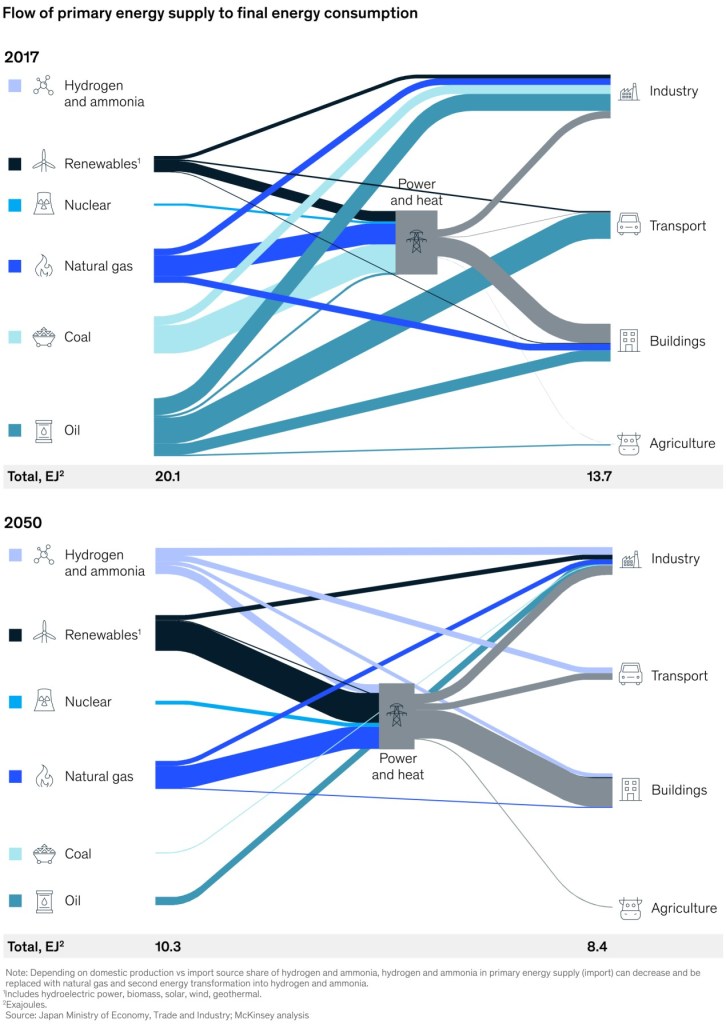 For Japan to meet its immediate 2030 reduction targets and successfully achieve carbon neutrality by 2050, it will need to take some immediate actions (Exhibit 3). 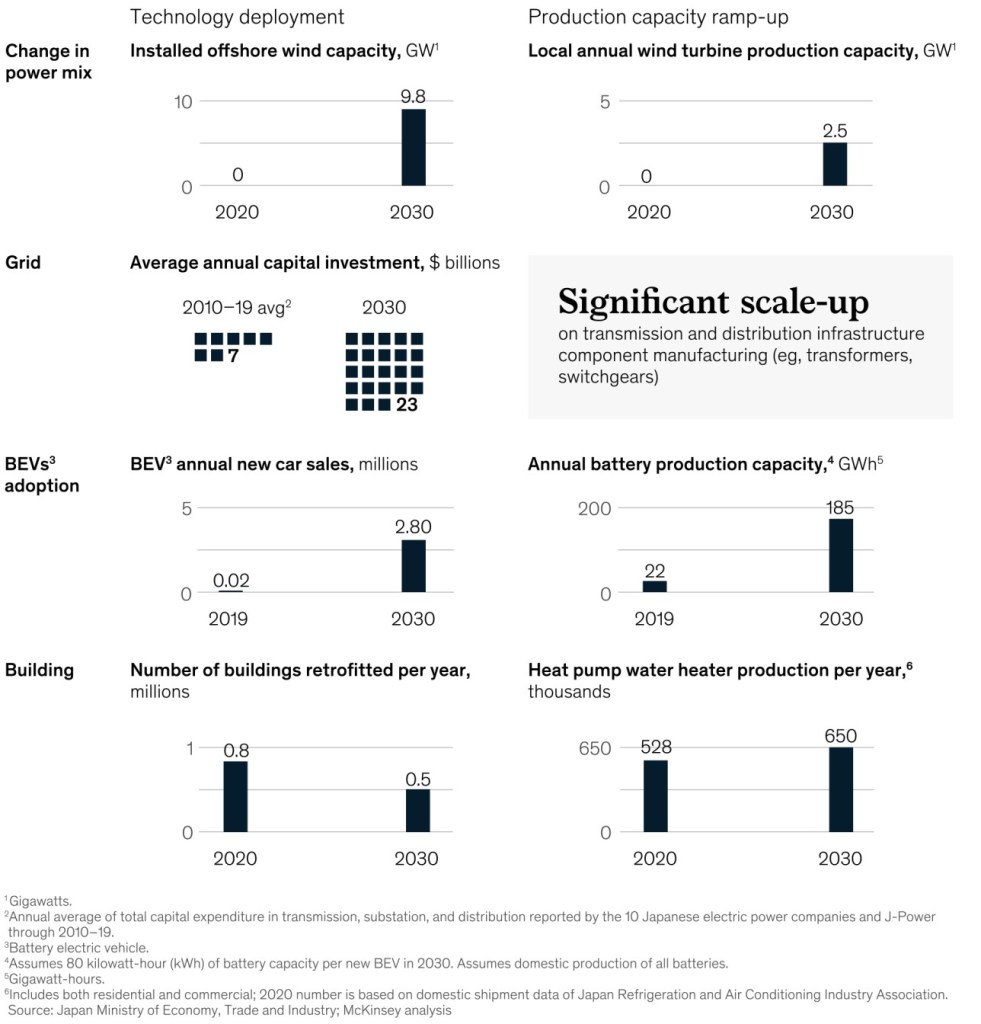 Exhibit 4 depicts what each sector will need to do to reach a collective net-zero emission goal of 2050.

Exhibit 4: Getting to net-zero will require dramatic steps in each sector 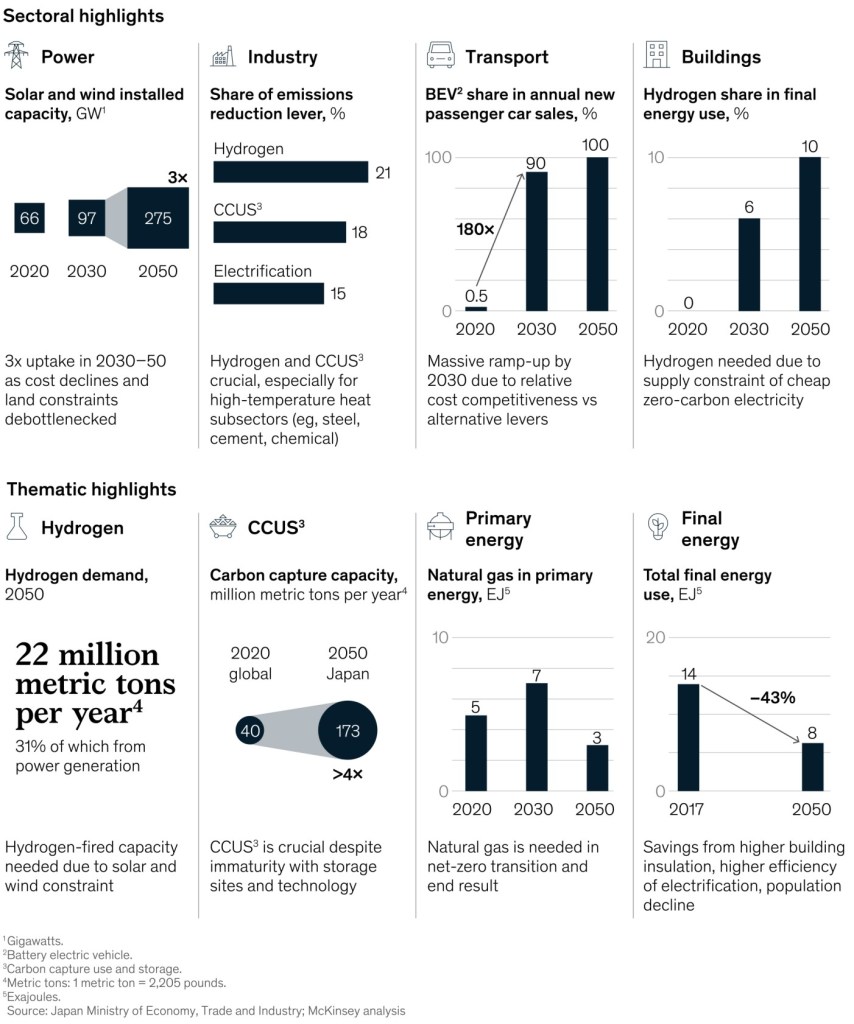 Transitioning to net-zero will require Japan to increase its hydrogen capacity by 22 million tonnes each year, and capture 173 million tonnes of CO2 by 2050. To achieve this, Japan needs a total investment of $10 trillion by 2050 or $330 billion annually.

Actions taken on time will set Japan among the ranks of green technology leaders, opening doors to business opportunities for companies and individuals, accompanied with rewards of a greener and cleaner future.