Online education has been thrust upon students, but in many countries around the world, there are teething problems that limit its efficacy
26.06.2020
Ankit GuptaDirector at Good Luck Publishers

It is important to assess the efficacy of online education, given the various challenges that come with taking learning online, particularly in the developing world. Photo by Baim Hanif on Unsplash.

Online education has been thrust upon students, but in many countries around the world, there are teething problems that limit its efficacy

As we get used to living with the coronavirus, we are having to deal with changes at an unprecedented scale – be it in terms of how we socialise, how we work, or how we keep ourselves entertained. The spate of changes has resulted in the now fashionable term – ‘new normal’.

Education is one of the areas that has been deeply impacted, given schools have been compelled to remain shut and large gatherings have been prohibited in most countries globally. One way to get around these obvious constraints has been to take education online.

There’s significant buzz around online education, with many believing—and suggesting—that this pandemic is going to result in a seismic shift in how children learn. Time will tell.

There is no doubt that online education has provided relief to students and ensured that learning continues through lockdowns. Children are now accessing more and more content than ever before – all with the click of a button.

But with more than one and a half billion children impacted by the closure of schools, it is important to assess the efficacy of online education, given the various challenges that come with taking learning online, particularly in the developing world.

There are enormous hurdles to overcome for online education to truly take root in the developing world. To begin with, it requires infrastructure that may be taken for granted in developed markets, but can be hard to come by elsewhere.

Power outages are a common phenomenon in developing economies. A nationwide survey (Mission Antyodaya) of villages conducted by India’s Ministry of Rural Development in 2017-18 showed that one in six households in the country received one to eight hours of electricity daily, 33% received 9-12 hours, and not even half (47%) received more than 12 hours a day.

Similarly, in Africa in 2018, more than half the sub-Saharan population or 600 million people, were living without electricity. This is a huge setback for online education and mostly impacts the poor, who comprise a sizeable chunk of the population.

Internet connectivity remains an issue across most of Africa, Asia and Latin America. Barring Singapore, Brunei and Malaysia, other Southeast Asian countries have poor internet penetration. In Indonesia, for instance, only 56% have access to the internet. This equates to only 150 million of its 268 million population having online access. Similarly, Thailand, Vietnam and Myanmar all have less than 60% penetration.

As China went into lockdown and schools shut down, several apps that facilitated remote learning were adopted by schools. However, in China, it is impossible for many parents to buy multiple devices for use by their children. Additionally, many cannot still access videos on phones because they are using outdated handsets that only allow phone calls.

Similarly, most Indian households do not have a laptop — and while mobile phones can be used to share content, they do not lend themselves well to attending live classes, screen sharing and long assignments. A recent survey found that only about 34% students in India had a decent internet connection and just 57% had the required hardware to attend online classes.

Education should not be a testing ground to check the viability of ideas, particularly if they mess with learning. Technology needs to support education, but unfortunately, many seem to think otherwise.

While educational institutions are meaning well in taking classes online, the required infrastructure on the part of the end users is often missing. Without access to devices, online learning is bound to leave entire social sections behind. It isn’t students alone who are faced with a lack of hardware; schools in rural areas too often lack the ICT infrastructure required to make remote learning possible.

Lack of training among teachers

The push for remote education has put many teachers in a quandary. Many teachers have never taught in virtual classrooms or used the ICT infrastructure at hand. Teaching a course online ideally requires preparation, such as designing a lesson plan and preparing teaching modules with audio-visual components. A new format poses new challenges. A retraining of the teacher pool is required before online classes can become a permanent part of the curriculum. In the context of education, teachers still remain the most valuable asset, and therefore, all systems, infrastructure, hardware and the like need to integrate finally with the person imparting knowledge. As a society, we must do more to make our teachers abreast of technological changes that could well stick beyond the COVID-19 crisis.

One could argue that these challenges will get resolved over time. But given that we are talking about the education of children, moving to a new format should only happen after these challenges are resolved. Education should not be a testing ground to check the viability of ideas, particularly if they mess with learning. Technology is not the end here; it is only the means to higher quality education (if possible). Technology needs to support education, but unfortunately, many seem to think otherwise.

The forced shift to online education has resulted in mixed views from the stakeholders involved. While parents are obviously relieved that schooling is being able to continue despite the lockdown, many are concerned about the health impacts of increased screen time, which studies show include effects on cognitive and language development. This has left parents impatient, many of whom have a negative opinion regarding online education.

Anecdotal evidence also indicates that parents are questioning the rationale of schools charging the usual fees for school terms, given that children are spending their days at home and parents are having to look after them through the day. This is placing undue financial stress on schools at a time when they need to be investing more in their ICT infrastructure.

This has also led to schools not paying teachers their salaries in full since they are unable to receive fees from parents. This is resulting in a vicious cycle of sorts, with no beneficiaries.

What really is education?

Education is not just about classrooms, exams and grades. It is a holistic experience of growing up in a system of camaraderie and learning things well beyond the classroom. It is about forming bonds that last a lifetime, and developing interests that cannot be taught in classrooms. “It takes a village to raise a child” is an old African proverb that captures the importance of social and communal interaction in the growth of children.

While virtual classrooms are providing respite in desperate times – they are far from providing a wholesome education experience. Even when all hard and soft infrastructure considerations are met, online learning will at best be one part of the education puzzle.

Education is not just about classrooms, exams and grades. It is a holistic experience of growing up in a system of camaraderie and learning things well beyond the classroom. It is about forming bonds that last a lifetime, and developing interests that cannot be taught in classrooms.

Technology does not make children smart. It is merely an enabler that, going forward, may solve an individual’s need for extra learning, but it would not be prudent to expect this to replace the concept of education as we know it – one with a valuable human touch. 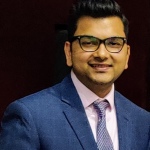 Ankit Gupta is an edupreneur with a decade and a half of experience working at the intersection of education, publishing and technology. In his key role, he provides affordable quality school books across South and Southeast Asia, and Africa. He is also actively involved in a teacher training and upliftment programme organised in various schools across India.