Fiscal policy is moving in the right direction, after the rapid consolidation witnessed in FY21. Slower fiscal consolidation and a focus on capex are supportive of growth, and measures to address the uneven post-pandemic recovery need to be next on the agenda
08.02.2022
Priyanka KishoreHead of India and South East Asia, Macro and Investor Services at Oxford Economics

A view of India's finance ministry on budget day earlier this month. Photo by Shutterstock.

India’s recent budget pegged the Fiscal Year (FY) (April 2022-March 2023) fiscal deficit at 6.4% of GDP, down from 6.9% in FY22. While both the deficits are higher than our expectations, they show a substantial slowdown in the pace of consolidation, as we had anticipated (Exhibit 1).

To recap, the FY21 deficit was boosted by accounting changes to reflect the entire financing of the food subsidy bill in the budget – as opposed to the earlier practice of keeping it partly off-balance sheet. But we estimate that even after adjusting for this accounting change, the fiscal deficit has narrowed by more than 1ppt of GDP between FY21 and FY22. This contrasts with most other emerging economies, where consolidation is progressing at a more measured pace to support post-pandemic economic recovery.

Exhibit 1: A slower pace of fiscal consolidation augurs well for the growth outlook 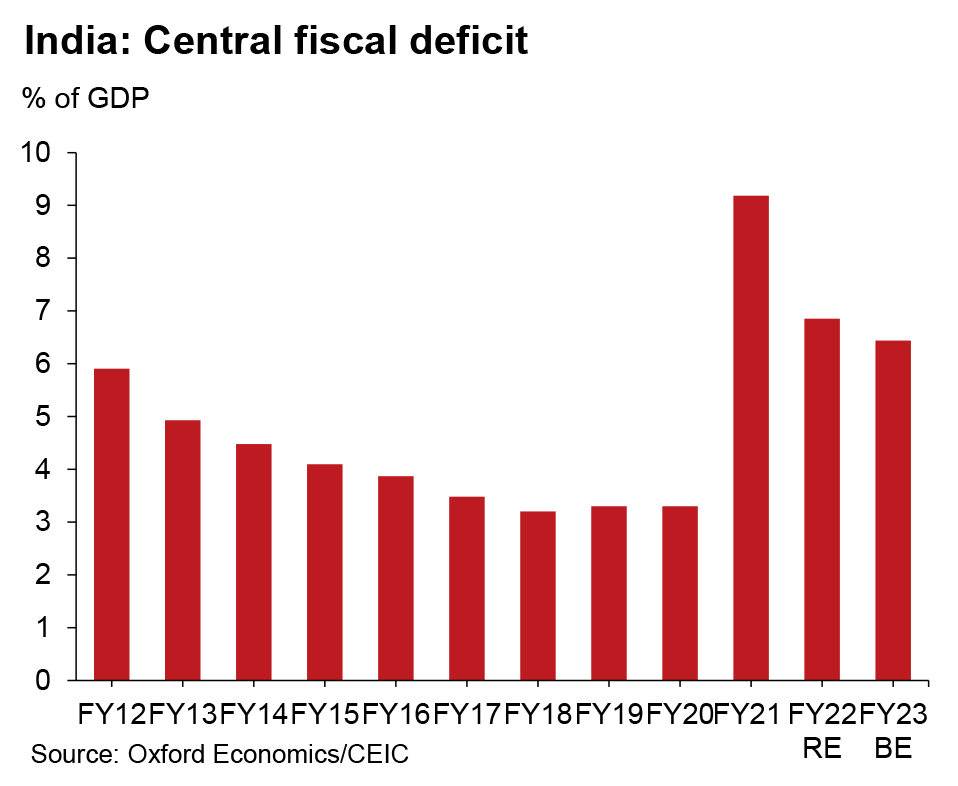 We have been of the view that India needs a slower pace of fiscal withdrawal, given the severe economic damage that it has suffered from recurring COVID waves. As a result, we welcome the smaller consolidation projected for the centre in FY23 and the higher fiscal deficit of 4% allowed for state governments. We also note that the centre’s FY22 capital spending and budget deficit estimates have been boosted by a one-off capital infusion into Air India. Excluding this lowers the FY22 deficit to 6.6% of GDP from 6.9% and implies just 0.2ppt narrowing of the deficit in FY23 (vs. the 0.5ppt budgeted).

Deficit to widen into the end of FY22

On the face of it, the fiscal trends indicate a big spending boost in the final quarter of FY22, with the overall deficit at less than 50% of the budgeted target as of December 2021 (Exhibit 2). However, the projections need to be treated with caution.

The deficit is wider than expected but don’t bank on a ‘big bang’ fiscal boost in Q1 2022.

As per the revised estimate, ex-Air India, capital expenditure is 0.6% lower in FY22 than the initially budgeted amount. Meanwhile, the upward revision in revenue expenditure is primarily due to the bigger subsidy bill, which reflects a significant jump in fertiliser subsidy and a higher food subsidy bill due to fiscal support announced during the second wave of the pandemic in Q2 2021.

So, while the deficit will widen substantially in Q1 2022, the economic impact is unlikely to be commensurately large. As we had expected, the budget has not made any explicit fiscal provisions to buffer the economy from the ongoing third COVID wave and we maintain our view that GDP growth will almost halve sequentially in Q1. 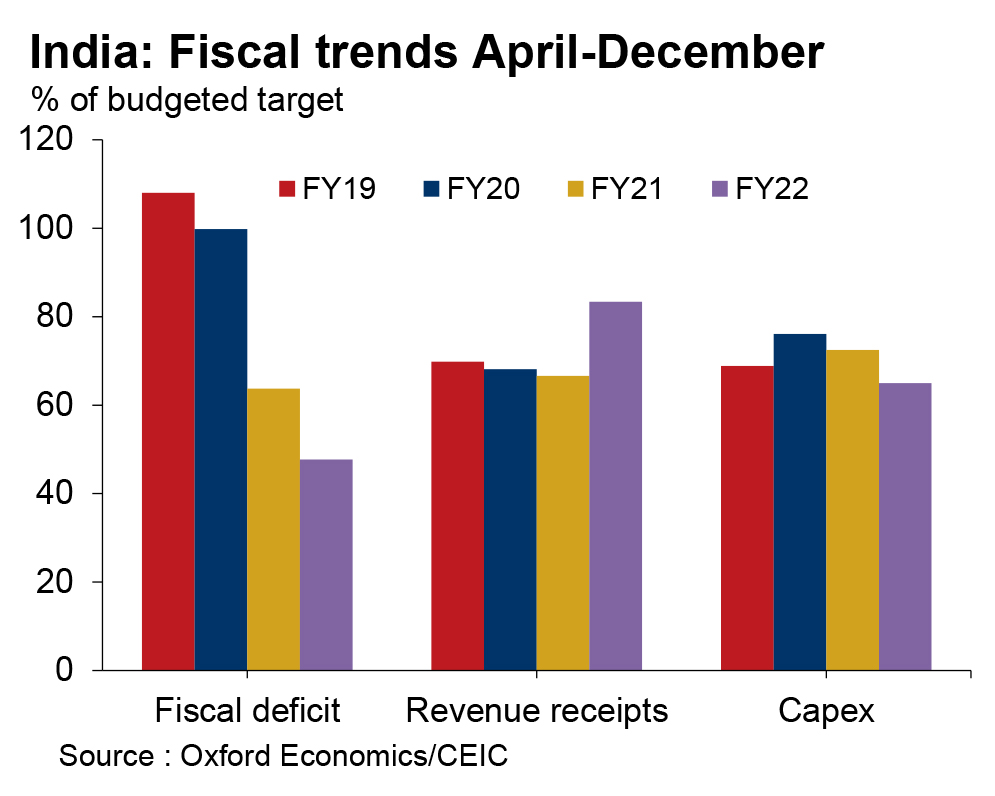 On the whole, the budget stays with the theme of pursuing fiscal consolidation, while creating positive externalities for the private sector to foster the economic recovery. A key pillar of this approach has been the focus on infrastructure spending and the FY23 projections pencil in a 36% jump in capital expenditure over FY22 (ex-Air India), pushing its share in GDP to 2.9% from 2.4% (Exhibit 3).

The capex allocations are broad-based with the government not only focusing on the traditional infrastructure sectors, but also new economy imperatives such as climate and digital investments. While we still think India’s climate investment challenge is massive, continued fiscal support is required to narrow the funding gap. In line with this, the initiative to issue sovereign green bonds is also a step in the right direction. 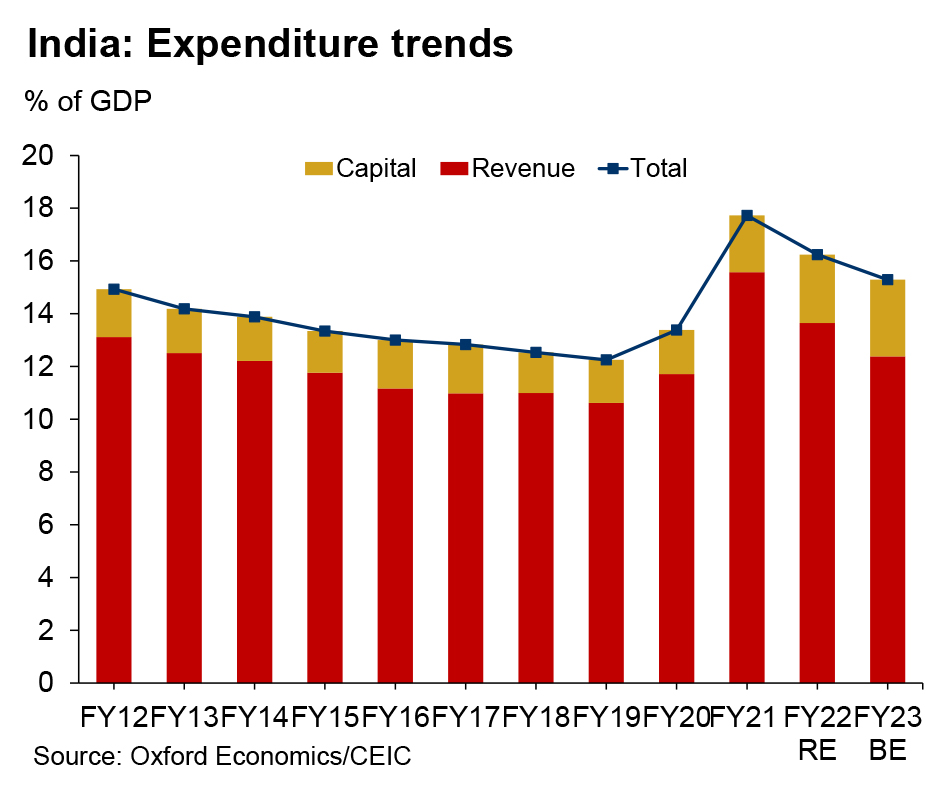 But those looking for a greater policy thrust on social expenditure and direct support for job creation are likely to be disappointed, as the continued emphasis on capex relies on both more modest revenue expenditure trends and a pick-up in fiscal receipts. The projected shares of both education and health in overall expenditure remain below pre-pandemic levels for the third consecutive year and hopes of an urban employment scheme similar to the MNREGA (a rural employment scheme that played a crucial role in buffering the rural economy from the worst of the pandemic) have not materialised. As has been the current government’s position, the Finance Minister highlighted the potential for job creation via higher investment spending and manufacturing schemes in her speech.

On revenues, we think that the math is credible and may have even erred on the side of caution. Gross tax revenue growth is projected at 9.6%, following the stellar 24% increase in the current fiscal year. This implies a modest gross tax buoyancy of less than 1. More importantly, the disinvestment target is lower than FY22 at INR650 ($8.7) billion. In our view, this considerably raises the possibility of an upside surprise on the government’s asset sales revenues for the first time.

However, we still forecast substantial economic scarring from the pandemic and the GDP level to be 10% below the pre-pandemic baseline even in 2025. This reflects legacy issues hampering private investment and labour market weakness, which has been amplified by the pandemic.

With the unevenness of India’s post-pandemic recovery well documented now, there is also a need to re-evaluate the requirement for more targeted support in the short term to facilitate a more inclusive and robust medium-term recovery.