Impact of COVID-19 on SDG implementation in Asia-Pacific

Street side vendors selling food in Ueno, Taitō, Japan during the pandemic. It is estimated that 124 million people could slip back into extreme poverty and the Asia-Pacific region could be among the worst affected. Photo by Jérémy Stenuit on Unsplash. 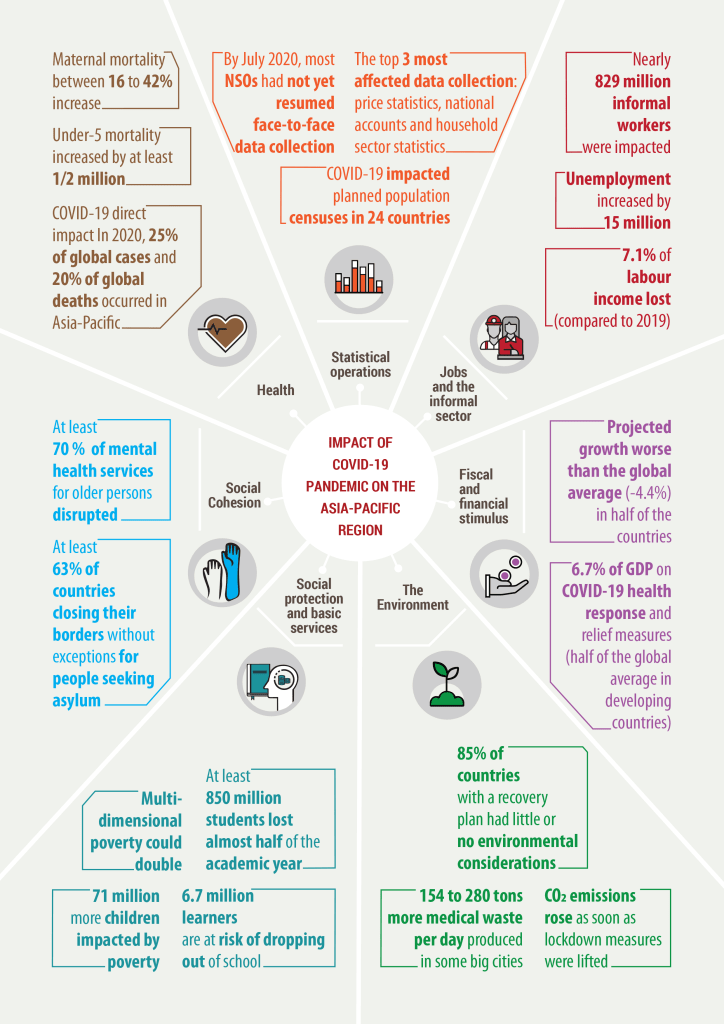 The pandemic’s impact on meeting SDG Goal 3 (ensuring well-being and good health of people) targets was most severe in the Asia-Pacific. In addition, the availability and accessibility of healthcare services was also affected. In a region that is home to 60% of the world’s population, it has accounted for about 25% of all cases so far. Of the total deaths reported in the world, an estimated 20% were from Asia-Pacific.

The vulnerable sections of society were hardest hit. From a worst-case scenario standpoint, a 40% increase—from an earlier 18-26%—was projected in terms of inaccessibility to family planning aids in 2020 alone. This could pose a significant hurdle to the successful accomplishment of SDGs.

The report also highlighted an increased disruption in availing essential healthcare services across 14 high-burden regional economies. This could well push the maternal mortality ratio to as high as 263 per 100,000 from an otherwise estimated figure of 184. Critical child care factors such as antenatal care, care during childbirth, postnatal care and vaccinations, have been seriously impacted due to COVID-19. It could result in over 500,000 additional deaths in children below five years of age. Over a 12-month term, this figure could double to account for over a million child mortalities.

Recent World Bank estimates suggest that between 119 and 124 million people could once again be pushed back into extreme poverty, the first such significant increase since 1999. And the Asia-Pacific region will be the worst affected. South Asia alone will house as much as 60% of this new poor. Furthermore, around 228 million of this demographic will need to survive on less than $3.20 per day, as a direct consequence of COVID-19.

Asia-Pacific is home to 640 million people that live in multidimensional poverty, with 530 million of them living in the South and South-West Asia sub-region. The pandemic has severely impacted the countries from these sub-regions in realising the SDG Goal 1 (no poverty) and SDG Goal 2 (zero hunger). The impact of COVID-19 on child poverty has both direct and indirect consequences. It is expected to push an additional 71 million children into monetary poverty by end 2020. In sum, an estimated 300 million children could be living in monetary poor households in Asia-Pacific.

From an academic standpoint, approximately 850 million students lost half their 2020 academic year. This greatly disrupted the region’s ability in realising SDG Goal 4 – of meeting literacy targets. Although the region was quick to adopt remote learning capabilities, an estimated 6.7 million learners stood at risk of dropping out of school due to their inability to access such technologies. By April 2020, 43 million teachers were affected by school closures in the region. Although this number has somewhat declined, it still remains high.

The region’s ability in meeting its target of SDG Goal 8 (decent work and economic growth) stands severely affected. The unemployment rate rose by 0.8 percentage points, leaving an additional 15 million people without jobs in the region. Working hour losses amounted to 8.1% – translating to an approximate total working hour loss of 150 million full-time workers. South and South-West Asia (at 12.8%) and North and Central Asia (at 9%) recorded the highest working hour losses in 2020. Meanwhile, income losses in Asia-Pacific due to unemployment and underemployment amounted to $1 trillion in 2020.

Informal workers make up a large subset of workers in the region. They were also the worst affected during the pandemic. As many as 829 million informal workers within the region lived in countries that had announced full or partial lockdowns during the height of the pandemic. These subsets of workers are mostly employed by SMEs, who often lack access to sufficient resources.

The International Monetary Fund (IMF) estimated that nearly half of Asia-Pacific countries witnessed negative economic growth rates, worse than the global average of negative 4.4% in 2020. It also seems unlikely that the projected global growth average of 5.2% in 2021 will be met. 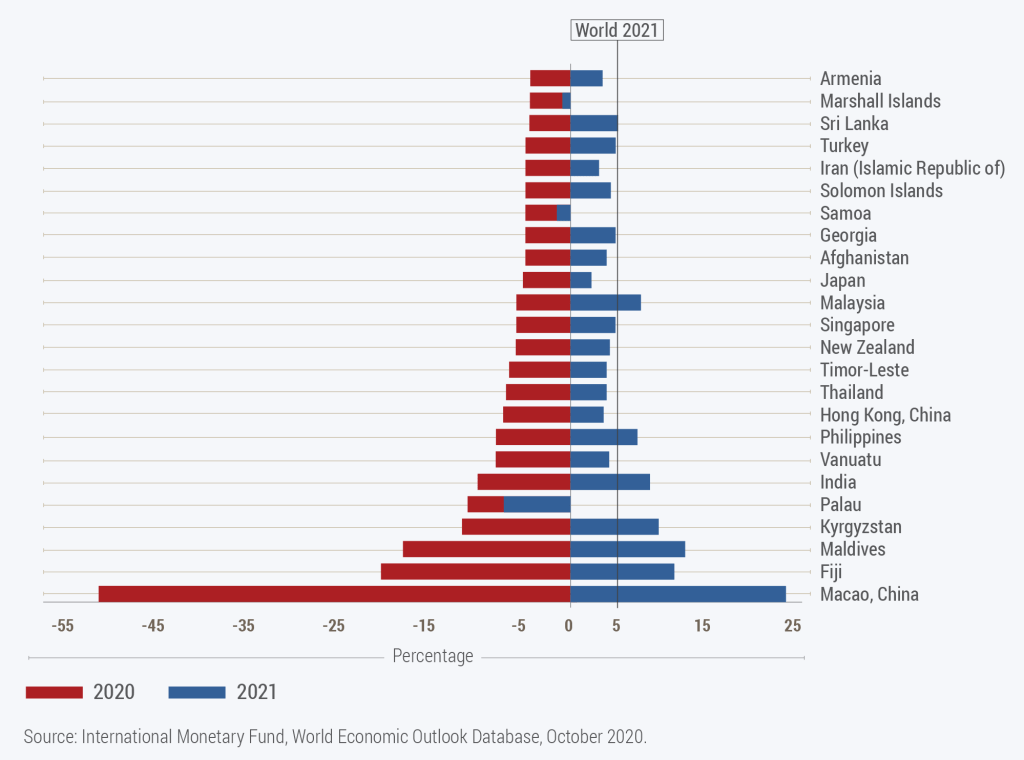 In response to the crisis, developing countries in the region announced an estimated $1.8 trillion—or 6.7% of their GDP—to provide relief measures to businesses and families. The IMF and multilateral development banks came forward to assist the region with a loan of $38 billion. The fiscal deficit of the region is expected to increase from 1.5% of GDP in 2019 to 6.8% in 2020.

Exhibit 3: Fiscal support in response to COVID-19 in Asia-Pacific 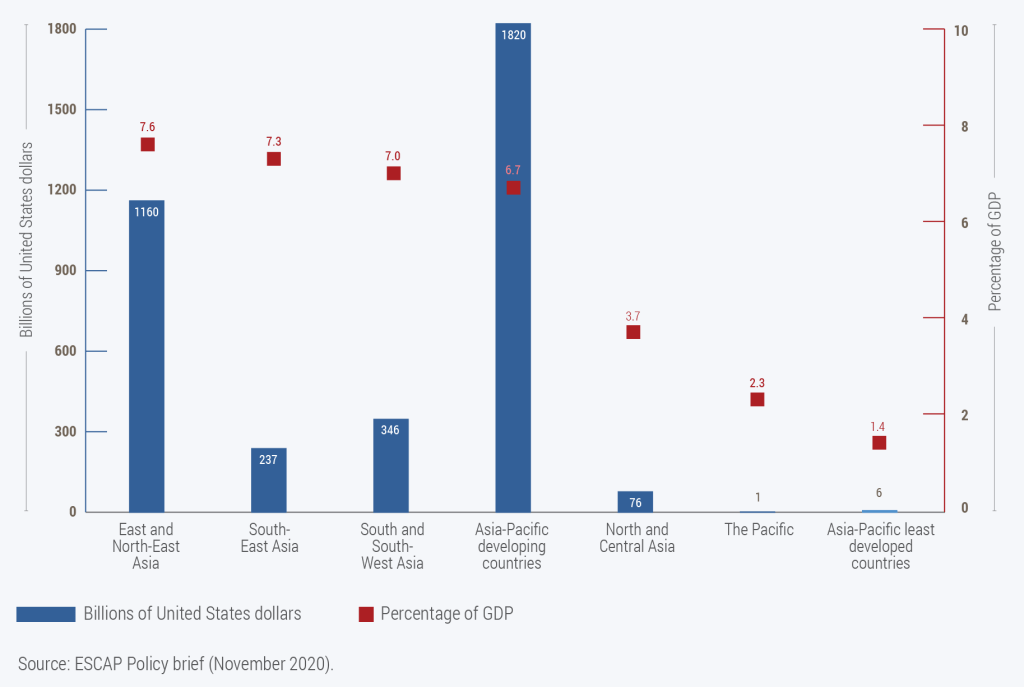 Older people remained the most vulnerable amid the pandemic. They were more prone to a higher mortality rate. And between June and August 2020, at least 70% of mental health services for older people were disrupted. There is an existing gap in long-term care systems for seniors in the region.

Child marriages typically register increases during humanitarian crises. And it was no different with the pandemic’s outbreak. This issue has witnessed the highest incidences in Bangladesh and Nepal. The pandemic may also result in an additional 13 million child marriages globally in the coming decade – a negative trend that could have otherwise been considerably slowed.

The announcement in border closures to control the virus’ spread also affected asylum seekers. Around 63% of Asia-Pacific countries closed their borders, making no exceptions for asylum seekers.

There have been mixed outcomes for the region’s environment. Lockdowns led to short-term environmental recovery, with less pollution levels due to reduced economic activity. However, the negative impacts quickly came to the fore. There were marked increases in medical waste generation and concerns that loss of livelihoods may inversely heighten environmental degradation.

CO2 emissions fell by 17% in April 2020 in comparison to April 2019. This pattern was common to China, India, Japan and Russia. This progress was short-lived though, as emissions spiked as soon as lockdowns were lifted. There was a 50% reduction in harmful air particulate matter in India’s capital of New Delhi – recognised otherwise as among the world’s most polluted cities. In China, there was significant reduction in emissions between January and March 2020. However, in the months that followed, emissions were at par, or even higher, than 2019 levels.

“Thus, despite a brief dip in carbon dioxide emissions caused by the COVID-19 pandemic, the planet is still heading for a temperature rise in excess of 3°C in this century – far beyond the Paris Agreement targets,” the report highlighted.

What is clear is that SDG target roadmaps are well off the mark. Earlier advances made on this front have been severely impacted and policymakers must prioritise on meeting the SDGs with renewed focus. Countries must consider adopting a One Health framework that ensures people’s well-being and environmental integrity are central to decision making. Unfortunately, recovery measures announced by 11 out of 13 APAC countries had little to no environmental safeguard considerations in their plans.

Armida Salsiah Alisjahbana, Under-Secretary-General of the UN and Executive Secretary of ESCAP put it succinctly when she said, “to build back better, it is critical for every country to renew its commitment to the monitoring framework of the Goals and targets, so recovery can accelerate a global transformation as promised by the 2030 Agenda for Sustainable Development.”