We speak with a digitalisation expert about digital trends that will define 2023 in Asia
10.01.2023
An interview with
Darren ThayreHead of Innovation, Global Strategic Initiatives at Google

What are some digital trends to watch out for in 2023 in Asia. Illustration by Shutterstock.

A lot happened in the year just gone by. From a full-scale military invasion that continues to spiralling inflation and a successful (although sometimes controversial) football world cup – to name a few. Amidst the news that mostly occupied headlines round the year, the call for businesses to digitalise remained strong and for good reasons.

We speak with Darren Thayre, head of Innovation, Global Strategic Initiatives at Google, about digital trends expected to play out in Asia in 2023, how digital banks are giving traditional banks a run for their money, the future of CBDCs in Asia and what companies should prioritise on the digital front.

Unravel: What are some key digitalisation trends you expect to see in Asia in 2023?

Darren Thayre: Obviously, the hot topic of the moment is generative AI. I think it is great that it’s been getting so much widespread press. Even your everyday person outside of technology has experimented with generative AI lately.

Like most emerging technologies, the distinction between lasting impact and a gimmick is determined by the practical use cases, which tend to take time to evolve. We will see the same here.

At Google, we have been working on generative AI for a long time, in five areas: text, source code, audio, image and video. We now have a small percentage of our code not written by humans, but given our scale that translates into the work of hundreds of engineers.

I want to stress though that our vision for generative AI is not to replace humans or human creativity, but instead to supplement it and spark new creative opportunities.

In Asia, most firms are still just dipping their toe in the water with AI, but I think the advent of generative AI will speed up that adoption and we will see some leaders emerge in 2023/24.

Unravel: Will we see digital banks in the region successfully take on incumbents?

Mr Thayre: The jury is out on this one.

Generally speaking, if I look at the west or China, the better banking experience definitely sits with the digital banks in my opinion.

Thus far what we’ve seen in Asia is incumbent banks trying to launch digital capabilities and for the most part doing a fairly mediocre job of transforming the customer experience. I think they are still doing it because they want to cling on to customers, rather than delight them.

However, standalone digital banks in the region are very new. The jury is still out on their offerings and the ability to provide a customer experience like we’ve seen in the west or in China.

I think there’s a scale challenge. Yes, Asia is very big, but it’s not one market and many players need to find a way to achieve scale across many markets while providing a consistent and frictionless experience. That’s quite difficult to do.

There’s still time for incumbents to act, but they need to move at a far quicker pace and more disruptively than they have so far.

Unravel: Do you expect to see any big moves in the area of central bank digital currencies (CBDCs) in Asia in the new year?

Mr Thayre: 2022 was a big year for CBDC’s, with more than 80% of the world’s central banks already considering launching a CBDC. 2022 was also the year of trials and testing. However, I see nations picking up pace to make CBDCs a reality and I believe this will become a major priority in 2023 – countries are racing to see who sets the bar in terms of standards.

China is far ahead in this space. The Bank of Japan is planning a soft launch early in 2023 with a few banks and I expect other Asian nations to follow in late 2023 or early 2024.

Unravel: In your view, what should be the priority for companies in Asia from a digitalisation perspective?

Mr Thayre: We saw a spike in companies pivoting to digital during COVID, as everybody rushed to get online and collaborate remotely. However, I feel for the most part that was putting a band aid on the situation and that most firms still have to go through the much-needed transformation.

By and large business models are still not natively digital, there’s talent gaps and these firms are ripe for disruption. Having said all of that, it’s really hard to transform a large incumbent firm. As McKinsey tell us, 70% of transformations fail, so what should we do?

My view is CEO’s should create a corporate venture capital arm, as a hedge against the transformation efforts not being successful. Use this arm as a vehicle for external investments, digital product builds, creating ecosystem partnerships and to accelerate new ways of working.

This is still a relatively untapped concept in Asia. I believe we will see a lot more of that in 2023. 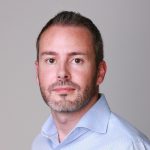 Darren is a digital transformation subject matter expert. He has worked with large enterprises all over the world on their digital plans and change programmes. He heads up Digital Transformation and Digital Ventures for Google across Asia-Pacific, Japan and China. Darren can now call upon the vast Google and Alphabet resources to help customers with their transformation journey. Previously Darren led a consulting transformation team in Amazon Web Services, where he was responsible for some of their largest digital transformations globally.