Home Globalisation & Geopolitics How to tax in Asia’s digital age

How to tax in Asia’s digital age

A woman enters her bank details while shopping online. Photo by Pickawood on Unsplash.

Digitalisation—the technology that powers fintech, e-commerce and online services—enables us to make mobile money transfers, purchase goods and services online and interact with people across the globe. It has created some of the largest global businesses, such as online platforms and marketplaces connecting producers and consumers across the world. 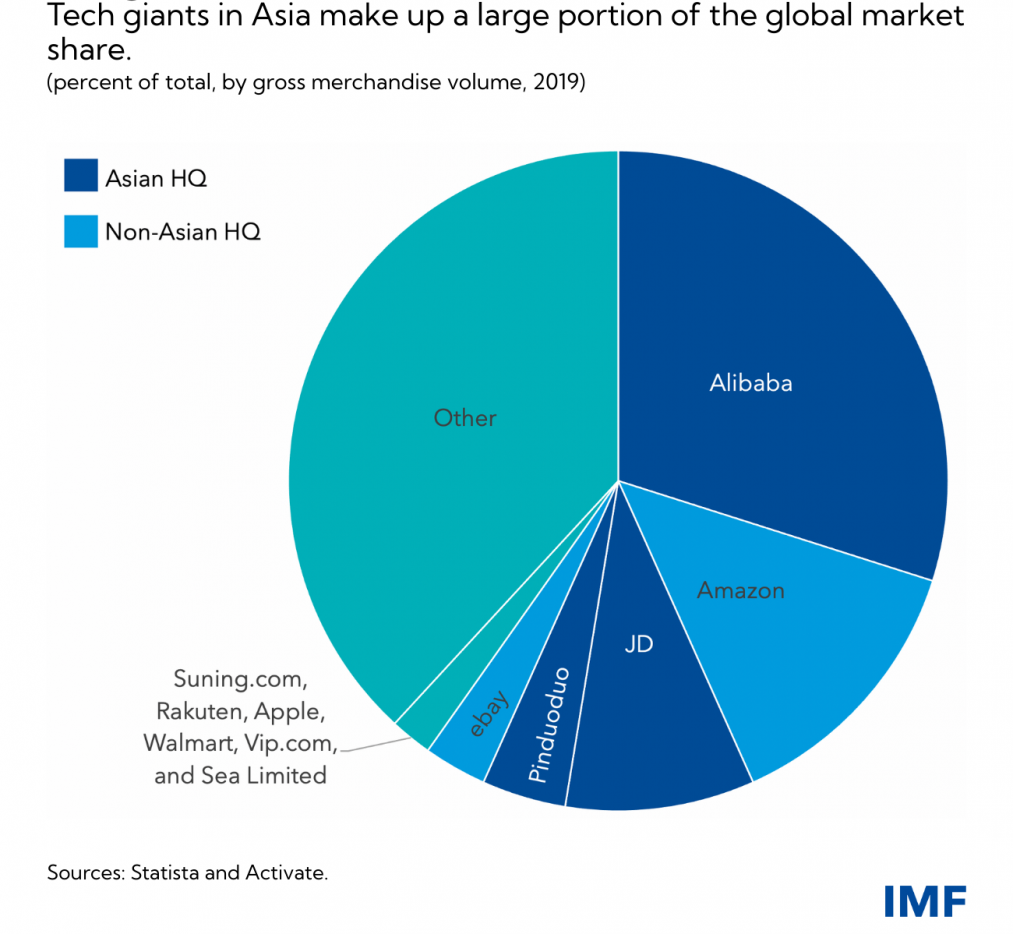 Thus far, it’s been challenging for many Asian countries to tax tech giants especially because many are not physically but rather only digitally present in a country. Existing international norms for taxing profits, which many people consider to be outdated and unfair, haven’t kept up. Collecting taxes on cross-border digital services and small parcel e-commerce deliveries is also a challenge.

Some Asian countries have started to introduce digital services taxes—withholding taxes on payments for cross-border digital services or user-based turnover taxes on digital activities. These, however, may become redundant if a new global system for profit taxation is adopted.

As of August 2021, the United States and most major Asian economies were among the 134 members of the Inclusive Framework led by the Organisation for Economic Co-operation and Development (OECD-IF), agreeing to allocate taxing rights on profits to countries where consumers and users are located, reflecting the digital presence. Details are still under discussion, but under the agreed global reforms, a portion of profits from multinationals with global sales above EUR20 billion (roughly the 100 largest global companies) will be allocated across countries in proportion to local sales and taxed under local laws.

In a new IMF staff paper, we survey the digital landscape in Asia and the effect of proposals, such as that from the OECD-IF, on corporate tax revenue across Asian countries. We also outline the pros and cons of digital services taxes and estimate their revenue potential. Finally, we calculate the potential additional revenue gains from collecting value-added tax on digital services and cross-border e‑commerce sales of goods.

Investment hubs such as Singapore and Hong Kong SAR could lose up to 0.15% of GDP in corporate tax revenue because the profits currently declared in these countries by multinationals exceed the local share of total sales. Whereas high-income countries with large domestic markets—Australia, China, Japan, Korea—would gain revenue, developing countries such as Vietnam could lose revenue.

The agreed changes could spur more comprehensive reforms applied to all companies and to a larger share of profits. That would cause a much larger reallocation of tax revenue across countries, with the largest losses expected for investment hubs in Asia and expected gains for several developing economies.

Exhibit 2: Some gain, others lose 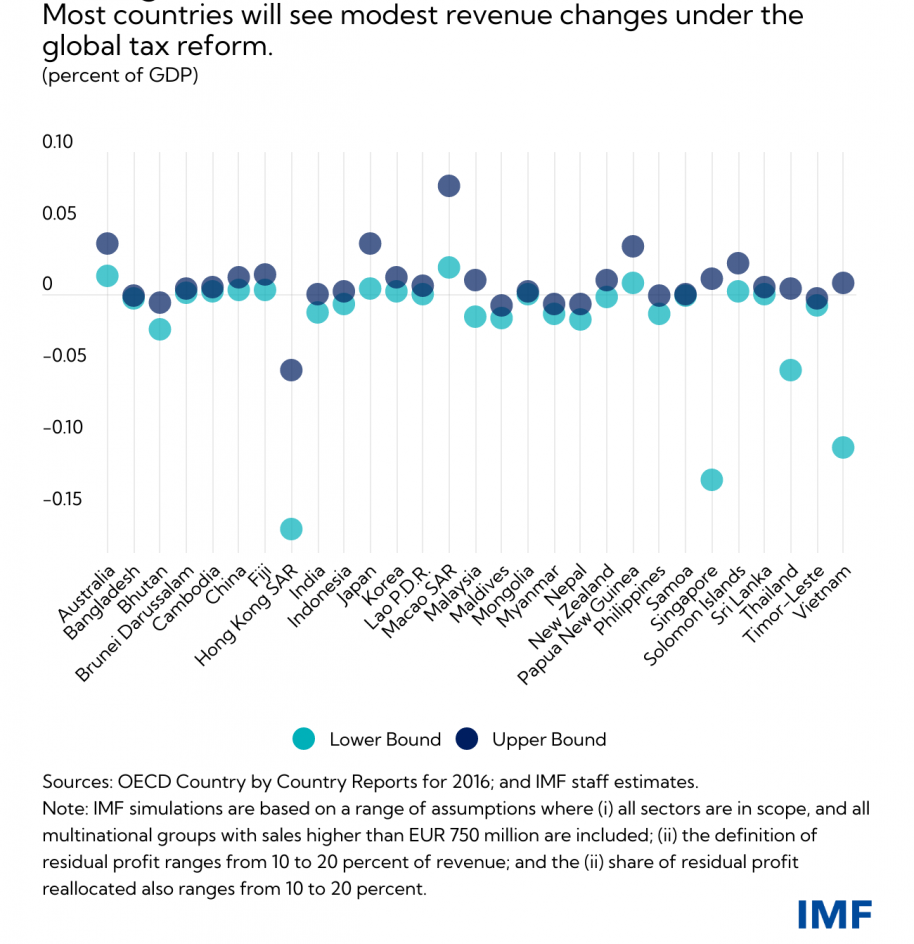 Digital services taxes—although easier to implement—don’t raise much revenue and have other drawbacks. A digital services tax similar to India’s Equalisation Levy would have yielded only 0.02% of GDP in 2019 for Bangladesh, Indonesia, the Philippines and Vietnam. Digital services taxes can also distort business decisions and still be vulnerable to tax avoidance. Moreover, they can complicate trade relations, because they are usually applied only to large firms headquartered abroad.

Resolving these challenges pays off. Requiring non-resident suppliers of digital services and e‑commerce marketplaces to register with local tax authorities and remit value-added taxes on their sales could raise revenue between 0.04 and 0.11% of GDP in some countries in Asia, translating to an additional $166 million in Bangladesh, $4.8 billion in India, $1.1 billion in Indonesia, $365 million in the Philippines and $264 million in Vietnam.

As Asian consumers and businesses increase their online activity in the coming years, tech giants will expand further into Asian countries, making taxation in a digitalising economy even more important. Countries in Asia, in particular, can invest in ways to harness digitalisation for tax administration helping to reduce tax evasion, boost revenue mobilisation and make tax collection more efficient. With countries further shaping the agreement in the OECD-led Inclusive Framework, the fundamental reforms that lie ahead may make the international tax system more robust for the digital age.

This piece was first published on the IMF Blog and can be read here. 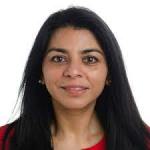 Era Dabla-Norris is a Division Chief of the Asian I Division in the IMF’s Asia Pacific Department and mission chief for Vietnam. Previously, she was a Division Chief in the IMF’s Fiscal Affairs Department, working on structural reforms and productivity, income inequality, fiscal spillovers, debt and demographics. Since joining the IMF, she has worked on a range of advanced, emerging market, and low-income countries and published widely on a variety of topics, and has been a contributing member of the World Economic Council. 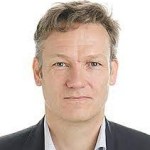 Ruud De Mooij is an advisor in the International Monetary Fund’s Fiscal Affairs Department, where he previously headed the Tax Policy Division. He has extensive experience in providing capacity development on tax policy issues in over 25 countries. Before joining the International Monetary Fund, De Mooij was a Professor of Public Economics at Erasmus University in Rotterdam, the Netherlands. He has published extensively on tax issues, including in the American Economic Review and the Journal of Public Economics. De Mooij is also a research fellow at the University of Oxford, the University of Bergen, ZEW in Mannheim, and member of the CESifo network in Munich.

Andrew Hodge is an economist in the IMF’s Western Hemisphere Department. He previously served in the Asia Pacific and Fiscal Affairs Departments, working on advanced, emerging-market and low-income economies. His main areas of research concern optimal fiscal and monetary policy, long-run economic growth and the economic implications of population ageing. Prior to joining the IMF, he served as economist at the Reserve Bank of Australia.

Dinar Prihardini is an economist working in the Tax Policy Division in the Fiscal Affairs Department of the International Monetary Fund. Prior to joining the IMF, Ms. Prihardini worked at the World Bank and Australian Treasury, where she focused on analysing fiscal and labour market policies using general equilibrium models. At the IMF, she provides technical assistance to member countries and conducts research on a broad range of tax policy related issues.

2022 Outlook: The future of globalisation

Fintech in ASEAN both resilient and booming