Due to the economic importance of coastal areas, the insurance industry can contribute significantly to their protection
20.12.2022
Brigitte M. BalthasarSenior Disaster and Climate Risk Financing Specialist, Sustainable Development and Climate Change Department at the Asian Development Bank

Fishing boats in Ko Samui, Thailand. Millions of people in Asia-Pacific make their livelihoods in coastal areas. Photo by Samule Sun on Unsplash.

Under current greenhouse gas emissions scenarios, mean sea level could rise by more than one meter by 2100, resulting in flooding of coastal areas that are critical to human life and the planet. These areas are trade and communication routes, provide resources and livelihoods, and are often centres of economic growth through industries such as tourism, shipping, fishing, and mineral extraction.

Half of the world’s population lives within 60 kilometres of a coastline. Many of these people are in Asia and the Pacific. The marine economy, which includes broad categories of jobs and ecosystem services, is estimated to be worth $3-6 trillion per year. Thus, these are not only population centres, but also important economic centres.

Hence, such a sea level rise could flood entire coastal cities and communities in atolls, expose hundreds of millions of people to the risks of more severe and frequent flooding, and increase coastal erosion, land loss and salinisation.

According to the World Bank, mangroves are estimated to protect more than 6 million people from annual flooding and prevent additional annual losses of $24 billion in productive assets. Taking into account all of their benefits, such as protection against coastal erosion and floods, job and livelihood creation for fisheries, and hosting a rich biodiversity, global mangrove wealth is now valued at over $547 billion.

However, the health of these ecosystems is rapidly declining due to direct man-made impact such as clearance of mangroves, drainage of wetlands for agriculture, destructive fishing, or urban expansion as well as exaggerated impact by climate change such as ocean warming, acidification, loss of oxygen or salinity intrusion.

Investments in resilience and adaptation can be highly cost-effective in reducing these vulnerabilities.

Government funding has not kept pace with the growing need to both reduce risks and build resilience to disasters caused by natural hazards such as tropical storms or floods. Public budgets are unable to fully fund post-disaster clean-up and reconstruction and more importantly, planning and implementation of preventive measures. Due to the economic importance of coasts and reefs, the insurance industry can contribute significantly.

Half of the world's population lives within 60 kilometres of a coastline.

Their contribution to protection of ecosystems and improving coastal resilience is manifold:

Parametric insurance covers the probability of an event occurring and not the actual loss. Instead of paying out based on the loss incurred, parametric insurance pays out based on a qualifying event occurring with, usually, the intensity of that event acting as a scalar for the pay-out amount. This allows the product greater flexibility with regards to design and function.

Additionally, the payout is typically faster as there is no need to go through a long claims process. Hence, parametric insurance provides immediate funding, for example to restore coral reefs and the services they provide after a storm.

Kickstarting the reef recovery process in this way helps to minimize the impact of damaging storms and enhances the climate resilience. According to research by the InsuResilience Solution Fund the cost/benefit ratio of such actions has been calculated at close to 1:10 compared to no intervention.

Through regional catastrophe risk pools, countries or local communities can pool risks in a diversified portfolio, retain some of the risk through joint reserves and capital, and transfer excess risk to the reinsurance and capital markets. Through the pooling effect which creates a more stable and less capital-intensive portfolio through diversification the cost for each member can be reduced by as much as half. The scope of insurance which is currently concentrated around reefs could be expanded to include other sectors such as fisheries and utilities.

Green and blue bonds provide upfront capital for coastal resilience investments and contingent on cash flows for repayment and hence creates a pathway to greatly reduce debt burden while funding investments in marine conservation. These bonds represent tremendous growth potential as the latest discussion at COP27 have shown and the insurance industry can use parametric solutions to reduce the risk of default in the event of extreme natural events such as the world’s first sovereign debt “catastrophe wrapper” covering Belize’s loan repayments after a tropical cyclone extreme event.

By considering the value of ecosystems in relation to other investments, banks and insurance companies can be actors and potential investors. Scaling these solutions requires mobilizing private investment and matching investment needs with the most effective financing sources – a challenge which we need to address today. A combination of community engagement, planning, and investment is critical to success. 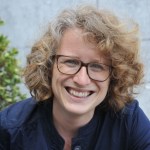 Brigitte is tasked to contribute to the financial management of disaster and climate risk across ADB’s developing member countries by working with ADB’s operational departments to prepare and implement respective solutions. Her primary responsibilities include developing disaster and climate risk financing approaches, conducting disaster risk assessments and providing policy advise.