How has Singapore’s logistics sector weathered the pandemic?

Singapore has strengthened its status as a global logistics hub despite COVID-19, thanks to technology, its strong network of trade agreements and unparalleled global connectivity
13.07.2021
Christopher OngManaging Director at DHL Express Singapore

An aerial view of the Singapore port. Singapore has Asia’s most extensive network of FTAs, and despite the pandemic it maintained its position as a global logistics hub. Photo by Chuttersnap on Unsplash.

On 7 April 2020, an unusual silence reverberated across the streets of Singapore as the country entered a nationwide partial lockdown to contain the spread of the COVID-19 outbreak. Roads and buildings emptied out as workplaces shuttered and schools closed.

Yet, at the Port of Singapore, it was all systems go. Container ships continued to dock while cranes loaded and unloaded containers around the clock, facilitating the flows of essential goods and cargo, not just for the country but also the world, even as the pandemic brought the global economy to a near halt.

Amid a global pandemic that has severely disrupted supply chains, Singapore’s strong maritime performance provides a clear indication of how it has built and defended its status as a global logistics hub.

The country ranked second out of 169 countries in DHL’s Global Connectedness Index 2020, which measures the development of trade, capital, information and people flows at the global, regional and national levels.

In addition to strong government focus on ensuring the free flow of goods and services, what are other factors that have been crucial to the city-state’s success?

Home to the world’s busiest transshipment seaport and one of Asia’s largest cargo airports, Changi Airport, Singapore’s infrastructure and connectivity have been critical enablers in global trade – even more so in this pandemic when freight capacity is scarce.

There are plans to double the annual cargo handling capacity at Changi Airport from 3 million to 5.4 million tons. Changi Airport also houses the 26-hectare Airport Logistics Park of Singapore, the country’s first logistics park with Free Trade Zone status when it opened in 2003.

In addition to being recognised for its infrastructure and connectivity, it is also known for its capabilities in handling time-sensitive cargo and cold-chain perishables.

Similarly, Singapore’s reputation as a cold-chain logistics expert paves the way for its ambitions to become a hub for vaccine transport.

Located at the crossroads of major shipping routes, Singapore’s seaport will also continue to facilitate trade connectivity by sea. The upcoming Tuas mega port will further enhance Singapore’s capability to serve as a transshipment hub for global trade flows.

Singapore has always leveraged technology to stay ahead. The Tuas mega port, for instance, which is slated to be fully operational by 2040, will be able to process 65 million TEUs as the world’s largest fully automated terminal.

The smart port will harness advanced technologies such as artificial intelligence and the Internet of Things to deliver green and sustainable solutions. These include driverless automated guided vehicles, smart sensors to detect shipping anomalies such as piracy, and data analytics to predict traffic congestion spots.

Earlier this year, the Singapore government also announced a S$15 billion ($11.1 billion) framework to attract tech-driven investments into the marine freight business. These include funding for startups in areas like environmental sustainability, data processing and cybersecurity.

The use of technology drills down to even small details that can make a big difference. And this is happening across companies. Last year, DHL Express Singapore launched a WhatsApp digital assistant to address customers’ international shipping queries instantly, allowing them to receive curated shipping information and track shipments on the go. Several other digital transformation projects were also implemented before the pandemic hit. These include robotic process automation to deliver better customer service by reducing waiting times.

A strong focus on global trade

Having a strong network of free trade agreements (FTAs) also makes Singapore attractive for multinational companies and startups hoping to establish their operations in the region.

Singapore has Asia’s most extensive network of FTAs, covering 60% of the world’s gross domestic product (GDP). The country’s 13 bilateral and 11 regional FTAs include some of the largest combined trade agreements – as part of the Association of Southeast Asian Nations (ASEAN). These include the ASEAN-China Free Trade Area, ASEAN-Japan Comprehensive Economic Partnership, the ASEAN-Korea Free Trade Area and ASEAN-India Free Trade Area, among others.

Exhibit: Singapore the world’s most connected country globally in terms of trade flows

In April this year, Singapore also became the first participating country to ratify the 15-member Regional Comprehensive Economic Partnership, which accounts for 30% of global GDP.

Singapore’s pursuit of FTAs—both bilateral as well as multilateral—ensures that it sits in the middle of the free flow of movement of goods through key partners around the region and beyond.

This provides Singapore-based businesses with preferential access to markets, little or no import tariffs, and intellectual property regulations to be better enforced in overseas markets.

A continuing focus on connectivity

While the COVID-19 pandemic has been a litmus test for the local logistics sector, Singapore has stepped up boldly to the challenge, with an eye on the future. This means ramping up training for logistics workers to prepare them for the post-pandemic economy. Logistics companies are also seen diversifying their business to remain agile and deepen market presence.

Going forward, Singapore will need to continue to invest in air connectivity for freighters to ensure that it maintains its status as among the most connected countries in the world. It will also need to invest in physical as well as digital networks to grow logistics. After all, the pandemic has shown that resilience, reliability and the ability to create buffers against supply chain shocks are important. With a strong foundation Singapore has built over the past few decades, and continued investment in digitalisation, the logistics sector has been able to survive the challenges and tests that the pandemic has thrown.

This is an adapted version of an article that was originally published here. 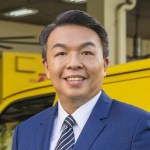 Christopher Ong heads up DHL Express in Singapore as Managing Director. He is responsible for driving profitable and sustainable business growth in the country. He is also a member of the DHL Express Asia Pacific Management Board. Prior to this appointment, Chris was Managing Director for DHL Express Malaysia and Brunei where he managed over 1,200 employees and 27 facilities, including 7 international gateways, spread across East and West Malaysia and Brunei. Prior to joining DHL in 2006, Chris spent about 10 years with Temasek Holdings.