How bad is Ukraine’s humanitarian crisis?

Russia’s assault on Ukraine could create as many as five million refugees. Experts say the war could soon become Europe’s largest humanitarian crisis since the 1990s
08.03.2022
Diana RoyAssistant Writer/Editor, Latin America at the Council on Foreign Relations

A child with the flag of Ukraine painted on his cheek cries, as many Ukranians flee the country due to Russia's invasion. Photo by Shutterstock.

Russian President Vladimir Putin’s invasion of Ukraine has created the largest humanitarian crisis Europe has seen in decades. With hundreds of thousands of people fleeing from the escalating conflict, neighbouring countries and international organisations are mobilising to condemn Russia’s war and provide relief for the growing number of refugees.

According to the UN refugee agency, at least 160,000 people have been displaced within Ukraine and more than one million people have fled to neighbouring countries, including Hungary, Moldova, and Poland. The United Nations is preparing for up to seven million internally displaced persons and as many as five million refugees, which would be the largest war-related mass migration since the Balkan Wars of the 1990s. As of March 2, at least 249 civilians have died and 553 have been injured, though the actual figures are likely to be much higher.

Many Russian attacks have hit highly populated areas, causing civilians to seek refuge in subway stations and leaving hundreds of thousands without electricity, water, or basic supplies. Experts also worry about Russia’s increasing reliance on artillery, cluster munitions, rockets, and other weapons that can devastate civilian areas, including in the major cities of Chernihiv, Kharkiv, Kyiv, and Mariupol. They say this escalation will likely lead to greater civilian casualties and infrastructure damage.

Meanwhile, COVID-19 transmission remains high in the country and only about 36% of Ukrainians are fully vaccinated against the disease. With the country’s health services already stretched thin, accessing treatment will be increasingly difficult.

How are European countries responding?

Europe has been quick to respond, and experts say it is the biggest show of European mobilisation in recent years. Poland, already home to an estimated 1.5 million Ukrainians (both naturalised citizens and temporary migrant workers), has welcomed more than half of all new refugees, at more than 547,000. The country is reportedly preparing to take in as many as one million people, having already set up temporary housing, hospitals, and reception centres that offer food, information, and medical supplies.

The remaining refugees have fled to Belarus, Hungary, Moldova, Romania, Slovakia, and other parts of Europe. About 5% of new refugees, or roughly 48,000 people, have headed east to Russia. Officials in Ireland announced that their country would waive all visa requirements for Ukrainians seeking refuge there, while the Czech Republic lifted its entry ban and COVID-19 restrictions for incoming refugees. At the European Union (EU) level, officials unanimously backed a plan to activate the bloc’s Temporary Protection Directive, a never-before-used law that would allow people fleeing Ukraine to enter EU states for up to three years without applying for asylum. Ukrainian nationals have been able to enter the EU without a visa since 2017, meaning that they can seek asylum in any member state. Separately, the United States has said its troops in Poland will be available to help with refugee evacuation. 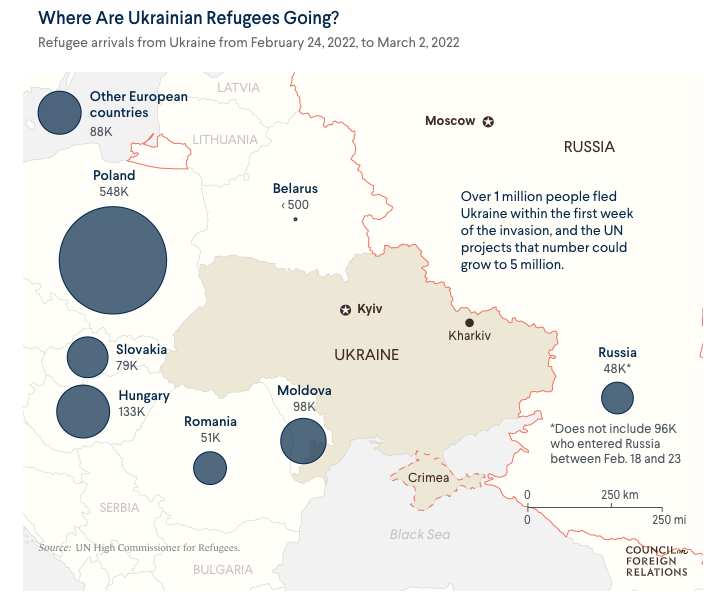 Some analysts note that this response stands in contrast to the refusal by many EU countries to grant blanket asylum to the more than one million refugees that began arriving from Africa and the Middle East in 2015, or to the tens of thousands of mostly Iraqi refugees who sought entry at the Belarus-Poland border beginning in mid-2021. Other critics point to the closed-door policy toward those fleeing the humanitarian situation in Yemen and the reports of some Africans and Asians living in Ukraine being refused transportation and entry into neighbouring EU countries.

What role is the United Nations playing?

Despite Russia’s permanent seat on the Security Council, the United Nations has expressed broad opposition to Moscow’s war.

On February 25, eleven of fifteen Security Council members voted in favour of a U.S.-led resolution strongly condemning the war and called on Russia to immediately withdraw its forces from Ukraine; Russia’s veto, however, blocked the measure. (China, India, and the United Arab Emirates abstained.) A week later, an emergency session of the full UN General Assembly—the first such session since 1997—voted 141-5 in favour of similar text denouncing the war.

At the same time, many UN agencies are taking action. Secretary-General Antonio Guterres swiftly appointed a crisis coordinator for Ukraine and announced $20 million in aid from the UN Central Emergency Response Fund. Likewise, the UN refugee agency is seeking to raise $1.7 billion for humanitarian assistance.

This piece was first published on Council on Foreign Relations and can be read here. 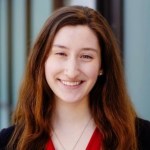 Assistant Writer/Editor, Latin America at the Council on Foreign Relations

Diana Roy covers Latin America and immigration for CFR.org. She has previously written on hemispheric affairs for the Center for International Policy and the Inter-American Dialogue.