In announcing subsidies, tax cuts and other measures to lessen the impact of global price shocks on consumers and foster growth, Asia-Pacific economies could see fiscal deficits increase through 2022
26.04.2022
Priyanka KishoreHead of India and South East Asia, Macro and Investor Services at Oxford Economics
Makoto TsuchiyaAssistant Economist at Oxford Economics

After fiscal deficits widened substantially in 2020, most Asian economies resorted to fiscal consolidation in 2021. Barring Taiwan, the consolidation was more rapid in the advanced Asian economies, as emergency COVID support measures were allowed to lapse, and robust GDP growth supported higher government revenues. The picture for emerging Asia was less impressive. With many of the economies under renewed pressure from the Delta variant, fiscal tightening proceeded at a slower pace. Notably, the fiscal impulse remained positive for India and the Philippines.

In 2022, we anticipate a widespread slowdown in fiscal consolidation (Exhibit 1), as policymakers tread the tricky path of containing upside inflation risks, while keeping an eye on downside growth risks.

Exhibit 1: Fiscal stance to turn less restrictive in most of APAC in 2022 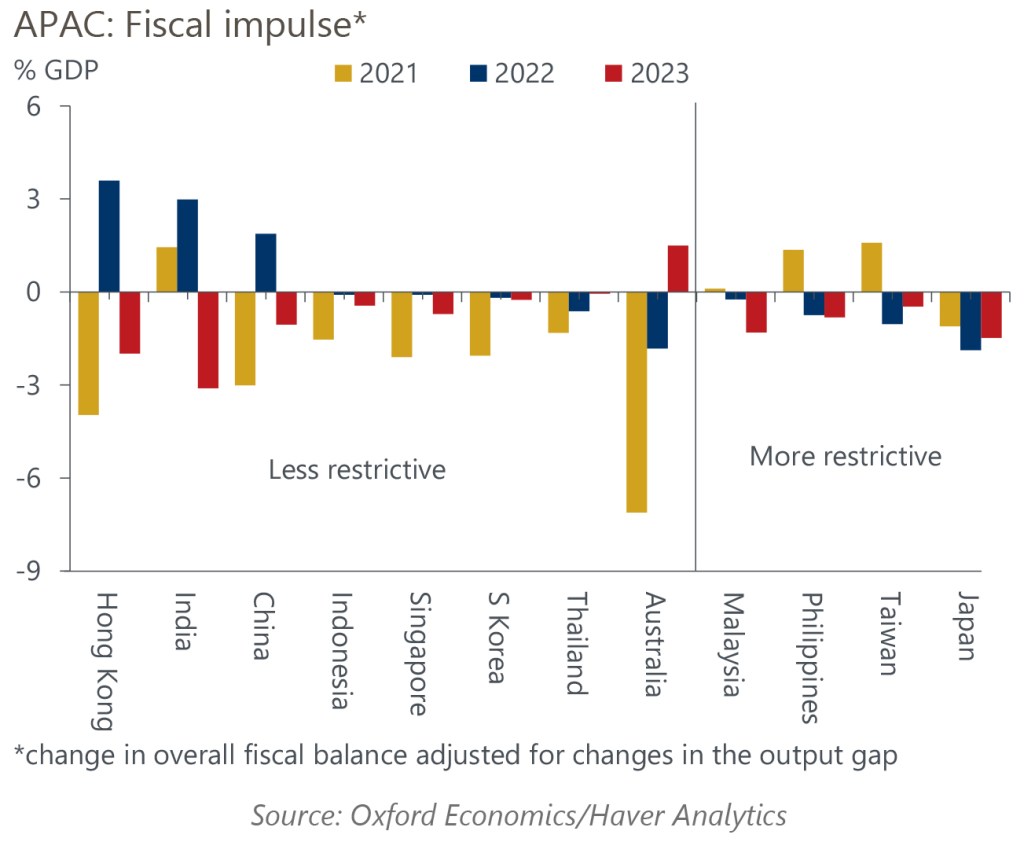 The Russia-Ukraine war has generated a global stagflation shock, the impact of which is being felt in the Asia-Pacific. The region has limited economic and financial ties with the warring countries. But it is an important importer of war-impacted commodities (Exhibit 2) – the prices of which are unlikely to fall back to pre-war levels anytime soon. This has important implications for the domestic economy and policymaking.

Exhibit 2: War-impacted commodities have an average 20% share in the Asia-Pacific import basket

To be sure, the risks are larger for the region’s commodity importers. But as we have analysed in recent research briefings, the commodity exporters are not necessarily immune. Some of them, such as Indonesia and Thailand (which is a net food exporter), depend heavily on imports of wheat and soybeans, for example, to meet their domestic requirements. Coming on the top of domestic price pressures from reopening borders and rebounding tourism, we expect higher import prices to keep Asia-Pacific’s food and consumer inflation trending upwards in the second quarter, and perhaps even in early part of the third quarter for some economies.

Asia-Pacific governments are no strangers to high inflation and its economic fallouts. Indeed, fuel, food and other agriculture subsidies are a common feature across the region (Exhibit 3). Rising inflation, particularly food inflation, is a politically sensitive issue, as food expenditure accounts for a large share of spending for the poorer segments of society and raises their cost of living. Hence, governments are quick to intervene via cash handouts, subsidies, tax cuts, and even trade bans if needed, to mitigate the impact of higher prices on consumers.

Exhibit 3: Subsidies in emerging Asia have averaged 0.9%-2% of GDP in recent years 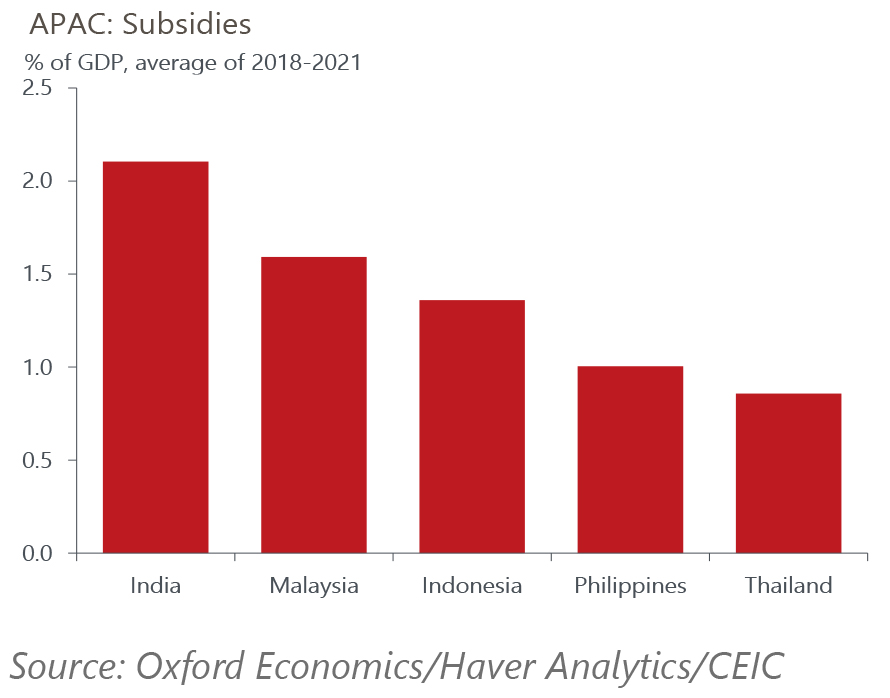 This has been the case this time. As Exhibit 4 summarises, governments have already announced a series of measures to shield consumers from the recent spike in energy and food costs.

Exhibit 4: Governments have moved to buffer their economies from high commodity prices 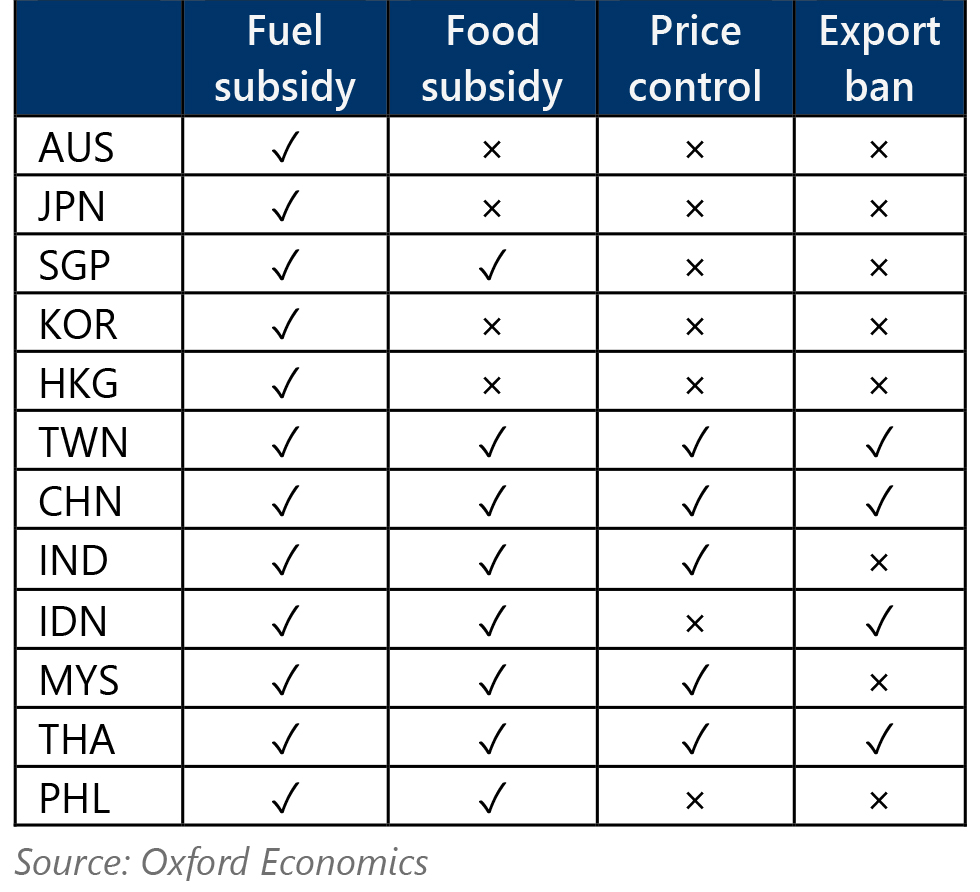 In particular, the Australian government has announced direct budgetary support amounting to 0.01% of GDP, targeting coal, electricity, natural gas and petroleum. Japan will spend around 0.07% of its GDP to subsidise gasoline distributers. South Korea has announced a fuel tax cut until July, with an estimated cost of around 0.19% of GDP. Meanwhile, Hong Kong and Singapore are subsidising utility bills for eligible households.

In emerging Asia, most governments have built in additional subsidy expenditure. We estimate fuel and food subsidies could exceed the budgeted amount by 0.5%-0.8% of GDP in India (1.2% of GDP budgeted), Indonesia (0.8% of GDP), the Philippines (0.2% of GDP), and Malaysia (1% of GDP), depending on how the geopolitical risks pan out and what that implies for global commodity prices.

Desperate times call for desperate measures, but the policy interventions to dampen inflation come with a fiscal cost. Not least because governments need to pursue prudent fiscal paths after the significant fiscal expansion to contain the economic and health impacts of the pandemic in 2020. It does not help that these developments have also coincided with rising government yields and prospects of higher debt servicing costs. As a result, since Russia’s invasion of Ukraine in late February, our forecast revisions have generally moved towards slower fiscal consolidation, except for Australia (Exhibit 5). This is also true for China, where the upward revision reflects a much lower than expected fiscal deficit in 2021 and not a faster narrowing in the deficit this year.

Exhibit 5: The Russia-Ukraine war has prompted downgrades to our fiscal forecast 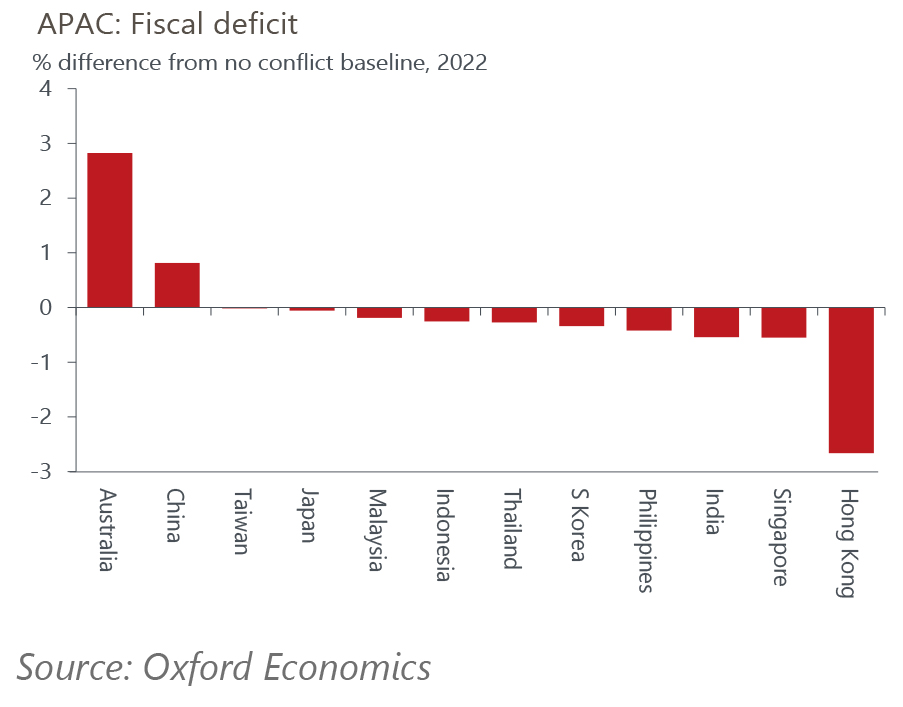 However, the range of impact varies substantially across the region. Higher commodity prices result in more expenditure, but also bolster revenues for some – especially the region’s fuel, minerals and grains exporters. This partly explains the sharp improvement in Australia’s 2022 fiscal forecast and why the fiscal impulse will still be less restrictive than in 2021. Muted downside revisions to Malaysia’s and Indonesia’s deficits also reflect the potential increase in their oil and gas revenues (Exhibit 6). 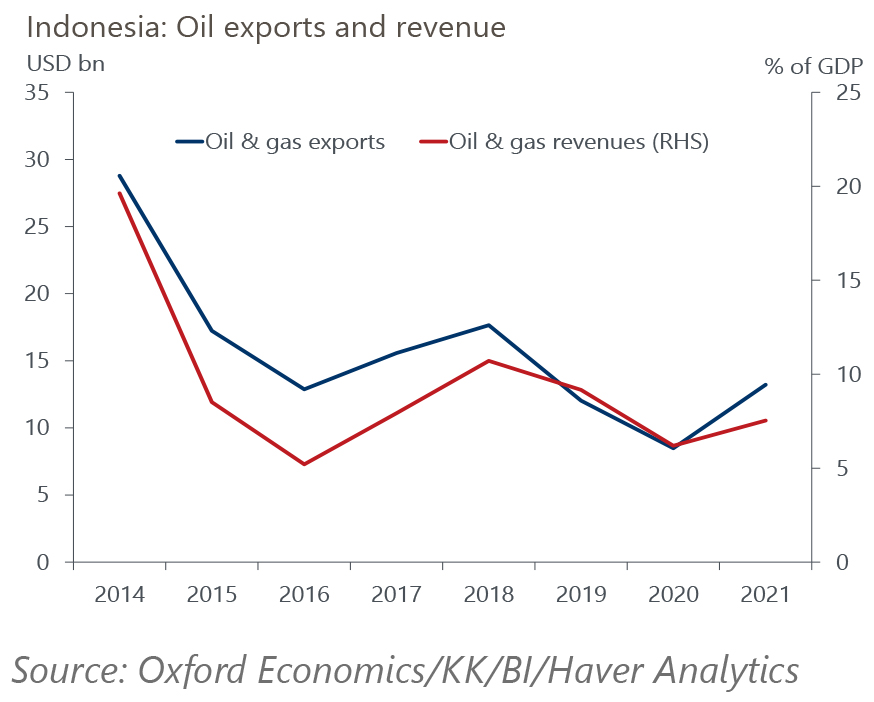 In fact, barring Hong Kong, China, and India, we still forecast fiscal deficits to be smaller in 2022 than in 2021 (Exhibit 7). Also, these economies’ widening deficits are mostly driven by country-specific factors and we expect them to narrow from 2023 onwards as external and domestic headwinds ease:

Exhibit 7: We forecast fiscal consolidation to progress in most of Asia, albeit gradually 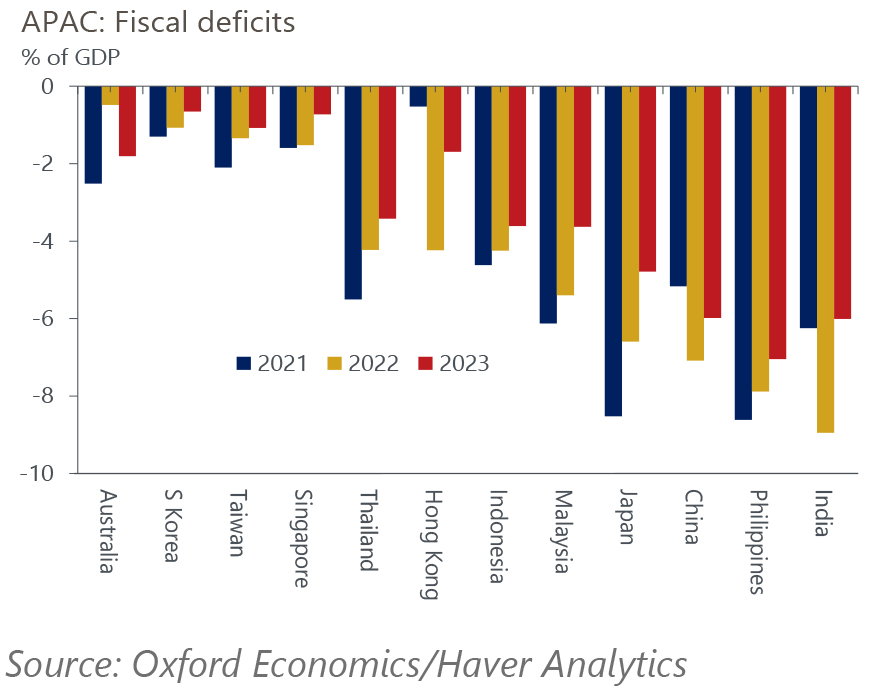 Public debt level bloated, but not yet alarming

Ultimately, we turn to the question of fiscal space. On average, Asia-Pacific’s debt-to-GDP ratio jumped by 10 percentage points in 2020. Within this, spending varied greatly. However, the slowdown in fiscal consolidation implies debt levels will keep rising across Asia in 2022. Only in Australia and Singapore do we see that public debt-to-GDP ratio has peaked.

However, with the exceptions of India and Japan, debt levels remain below or around the average of their peers for other economies (Exhibit 8). The interest-rate growth differential, which is a widely accepted fiscal sustainability measure, also shows the region has space to accommodate some slowdown in fiscal consolidation (Exhibit 9). 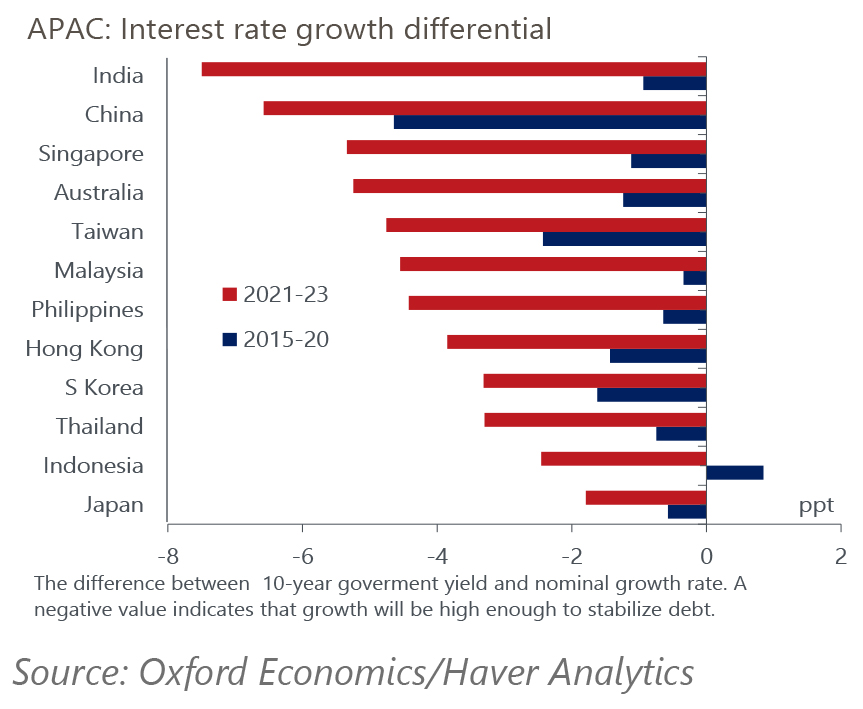 This is not to say Asia doesn’t need to pursue fiscal consolidation. While fiscal measures are necessary to dampen inflation and keep the economic recovery on track this year, it is important to keep sight of the growth and sovereign risks associated with prolonged periods of elevated debt levels.

Having a clear fiscal consolidation path is particularly important for the region’s twin deficit economies—namely, India, Thailand and the Philippines—to avoid financial market volatility and possible credit downgrades. We find India and Indonesia’s risk scores are broadly consistent with their ratings. But our tool shows that risks of a credit rating downgrade have increased for Thailand, the Philippines, and even Malaysia in the last couple of years.

We don’t think rating downgrades are imminent as growth prospects have improved with most Asian economies adjusting to ‘living with COVID’. Higher oil and other commodity prices also support a stable credit outlook for Malaysia and Indonesia. However, rating agencies have repeatedly noted their concerns about the lack of a clear fiscal consolidation roadmap for the twin deficit economies and could choose to move against our expectations if their medium-term growth projections turn less optimistic. 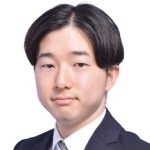 Makoto Tsuchiya is an Assistant Economist at Oxford Economics. He is responsible for forecasting and providing analysis on the Philippines. Makoto has a Bachelor's degree from Temple University Japan where he majored in Economics with a minor in Business Studies.