The Central Bank of Egypt in Cairo. Many emerging market central banks have eased monetary policy too much at a time of weaker economic fundamentals. Photo by Shutterstock.

Many emerging market economies have become more vulnerable to financial crises in the past year. Although we are in the midst of a pandemic, as compared to the time of the taper tantrum in 2013, current account deficits in emerging market economies are mostly smaller (or in surplus), FX reserves have been built up (Turkey being a notable exception) and there has been a smaller cumulative build-up of hot money inflows after the record portfolio flight seen in March 2020.

All is not necessary well, however.

Our analysis shows that COVID-19 has merely changed the character of emerging market weak spots. Many emerging market economies face some combination of chronically weak growth, rising inflation and a marked deterioration in fiscal finances, while still grappling with new waves of COVID-19 and limited access to vaccines.

Juxtaposed against these fragilities are emerging market central banks that, in a major departure from past global crises, loosened monetary policy—and drastically so—with real policy rates deeply negative and many starting quantitative easing for the first time. As Fed tapering looms on the radar screens of investors, we believe the danger is that many emerging market central banks have overreached—or eased monetary policy too much—at a time of weaker economic fundamentals.

Leaving Turkey aside (which arguably is already in crisis), we identified fragile eight markets last month—Brazil, Colombia, Mexico, South Africa, Hungary, Poland, India and Indonesia—that are most at risk of having loose monetary policy that is too loose.

Exceptionally loose monetary policy makes the fragile eight vulnerable in two respects: (1) having an interest rate risk premium that is not large enough to compensate investors for weakened economic fundamentals; and (2) falling into the trap of fiscal dominance (that is, losing some monetary policy independence).

The IMF found that, in a sample of 11 major emerging markets, aggregate foreign holdings of domestic government debt remain lower than they were in January 2020 (in USD terms), even as outstanding domestic debt increased by nearly $500 billion (Exhibit 1). 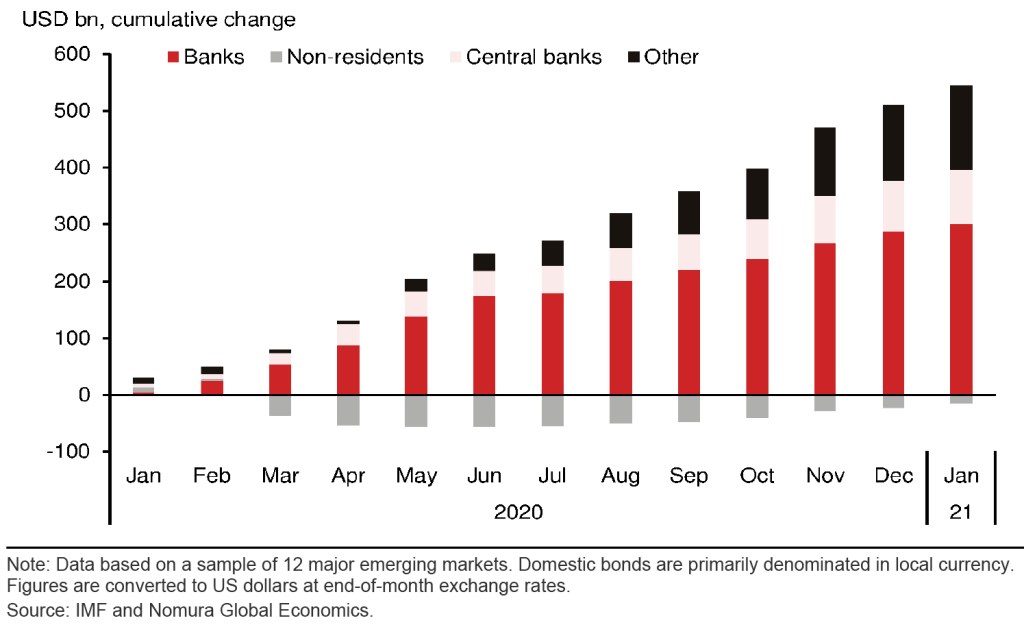 Based on the IMF’s International Financial Statistics, we examined commercial bank claims on the central government at a disaggregated level for 40 emerging and frontier markets. We found that there has indeed been a significant increase in bank holdings of sovereign debt since the onset of COVID-19, on average equal to 3.7% of GDP, and over 7% of GDP in Turkey, UAE, Pakistan, Brazil and Egypt (Exhibit 2).

For a single year, these are large increases in banks’ holdings of sovereign debt and, alarmingly for some emerging markets, they add to an already high banking sector exposure to sovereign debt, significantly higher than in developed markets.

Higher bank holdings of government debt are associated with lower growth of bank lending to the private sector. We find strong evidence of this relationship over the past year, with nearly all 40 emerging and frontier economies appearing to the right of the 45 degree line (Exhibit 3).

Exhibit 3: Latest growth in commercial banking sector claims on central government vs on the private sector

This negative correlation can be due to ‘crowding-out’ effects, as governments exert financial repression on banks to force or encourage them to purchase public debt securities, particularly when large budget deficits are exerting upward pressure on bond yields. If sovereign bond yields rise, they can also crowd out private investment and reduce the demand for bank loans by the private sector.

Alternatively, during large economic downturns, it seems reasonable to assume lower demand for bank loans from the private sector, along with higher public financing needs.

However, Bouis (2019) empirically tested these hypotheses on 80 emerging market economies over 2001-2016 and found that the negative correlation actually mainly reflects portfolio rebalancing by banks towards safer public assets during times of stress, and only limited evidence of the crowding-out effect.

The results of this study are worrisome, as COVID-19 clearly fits the bill as a major stress event, particularly for SMEs that tend to be more reliant on bank loans due to limited access to capital markets.

Tight bank lending conditions in emerging markets tend to have a more pronounced effect than in developed markets because borrowers have fewer alternative sources of credit. In fact, banks in emerging markets account for at least 70% of credit to non-financial borrowers, compared with only 36% in developed markets. Banks’ reluctance to lend to the private sector could indeed be prolonged if it reflects an anticipated rise in loan-loss provisions, once the temporary loan repayment moratoriums, government loan guarantees and other financial regulatory forbearance measures—all of which have greatly reduced loan defaults during the pandemic—start to be phased out.

So, one risk lurking in the shadows, particularly if the COVID-19 crisis persists into 2022, is a continued preference for banks to buy public debt securities than lend to the private sector. This can starve SMEs of bank credit, potentially result in a wave of corporate failures, and reduce private investment and result in lower potential growth rates for emerging market economies.

Another risk is the so-called bank-sovereign doom feedback loop, to which emerging market countries with already-weak fiscal finances and large bank holdings of sovereign debt are exposed. The ‘doom loop’ can be triggered if the government needs to raise debt to recapitalise banks, and the increase in government debt raises sovereign risk which in turn generates potential bank losses via their sovereign bond holdings.

The trigger could also happen in the opposite direction. That is, banks are negatively affected by rising sovereign credit risk through a fall in the value of their assets (government bonds); liquidity issues appear as the value of collateral used to obtain funding from the central bank declines; and banks’ credit ratings are then downgraded together with the sovereign.

The impact on the economy can be quickly amplified through these feedback loops, leading to a full-blown crisis in the worst case. This type of doom loop was at the heart of the 2009-2010 Eurozone debt crisis—with Portugal, Italy, Ireland, Greece and Spain at the epicentre—when banks had huge holdings of their own governments’ debt. As these bond holdings tumbled in value, the banks needed bailouts, which worsened the governments’ debt problems even further.

Some believe a doom loop is less likely now, as the very low interest rate environment has resulted in a negative interest rate-GDP growth differential, making it less likely that public debt will become unsustainable. However, IMF research warns that this may not last long if public debt is already high (and growing).

We assess the risk of a doom loop in our sample of 40 emerging and frontier economies by plotting the IMF’s latest projections of 2021 gross public debt (as a percentage of GDP) against commercial banks’ latest claims on the central government (as a percentage of total banking sector assets). Since COVID-19, the scatter plot dots have mostly been moving towards the northeast, and we would highlight seven countries that are in the danger zone of a doom loop: Pakistan, Angola, Egypt, Ghana, Brazil, Zambia and India (Exhibit 4). Ominously, Brazil and India already feature in the fragile eight emerging market economies that we had previously identified as being most at risk of having too loose monetary policy in the face of worsening economic fundamentals.

No light at the end of the tunnel, yet

Emerging market economies are more vulnerable to financial crises than they were last year. Some emerging economies have overreached and their loose monetary policies, particularly in the context of weaker economic fundamentals, are not sustainable.

And if that isn’t enough cause for concern, many emerging markets could face growing vulnerabilities from their commercial banks financing public deficits.

With the Federal Reserve experimenting on how hot it can run the US economy before inflation becomes a problem, emerging market central banks need to be extra careful to not fall too far behind the curve; they will need to lead, rather than follow the Fed in the next rate hiking cycle. A few emerging market central banks—such as those in Brazil and Russia—have started to raise rates, but the majority have not moved yet.