Within emerging markets, Asia has remained quite resilient to COVID-19 due to various reasons including greater preparedness (thanks to the SARS experience), faster government responses, a more compliant culture, greater use of face masks and greater deployment of digital technology for tracking and tracing. Photo by James Coleman on Unsplash.

Emerging markets in Asia stand a better chance at economic recovery than others, given growth in China, low oil prices and strong global tech demand

Emerging market economies globally have entered their deepest recession in at least 60 years. However, Asia—particularly China and Northeast Asia—stands out as the best in a bad bunch in terms of prospects for a strong recovery.

In addition to policy stimulus, Asia has in its favour the growth pole of China, low oil prices and solid global tech demand – and the scope to attract a bonanza of capital inflows as the global hunt for yield gains momentum.

To assess how well countries have handled the global health crisis, we have calculated a COVID-19 resiliency scorecard. It is the sum of Z-scores for the following four indicators: the number of COVID-19 confirmed cases per million (higher = less resilient), number of tests per million (higher = more resilient), case fatality rate (higher = less resilient) and recovery rate (higher = more resilient). Our scorecard is calculated using daily data for 62 major developing market and emerging market economies – the higher the total score, the greater a country’s resiliency to COVID-19. Figure 1 shows the full details at two time points, 12 May and 30 June.

In addition to policy stimulus, Asia has in its favour the growth pole of China, low oil prices and solid global tech demand – and the scope to attract a bonanza of capital inflows as the global hunt for yield gains momentum.

What is striking over this period is how the relative rankings have changed. Many emerging market countries have slipped down the rankings (become less resilient to COVID-19), most notably those in Latin America. 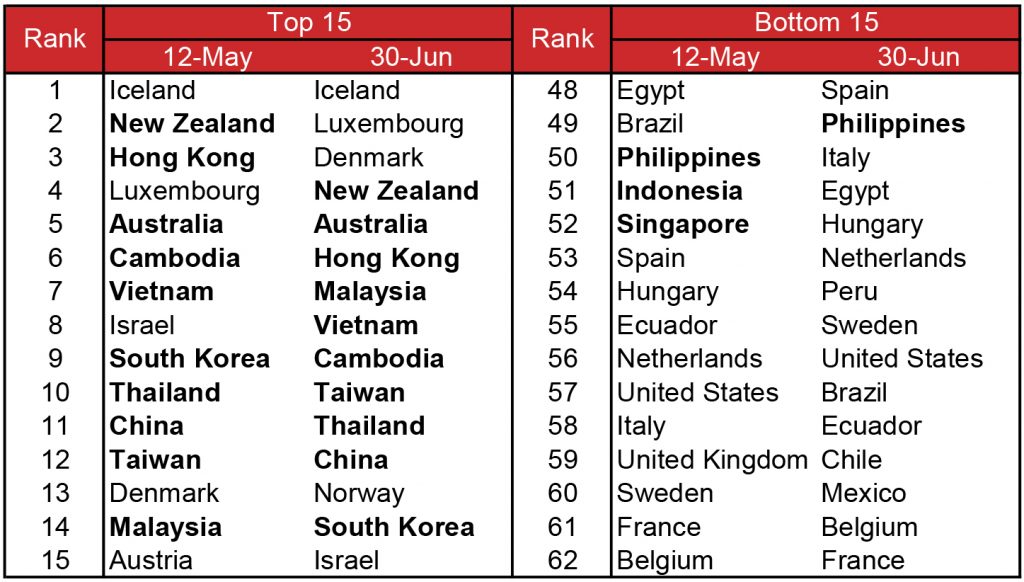 However, within emerging markets, Asia has remained quite resilient. On 12 May and 30 June, out of our sample of 62 countries, 10 of the top 15 countries most resilient to COVID-19 were in Asia-Pacific. By contrast, on 30 June, 8 of the 15 least-resilient countries are in emerging markets, but only one is in Asia. Various reasons have been offered for Asia’s relative resilience to COVID-19, including greater preparedness (thanks to the SARS experience), faster government responses, a more compliant culture, greater use of face masks and greater deployment of digital technology for tracking and tracing.

At the global level, the epidemic curve was flatter in June than in May and April, but the daily growth in the number of confirmed COVID-19 cases has recently stayed stubbornly in the 1-2% range, and there is growing dispersion across countries. This is likely related to the precautions taken and the speed at which economies are reopening. Rather than tracking official announcements of lockdown relaxation measures, we believe that a measure of people mobility is a better ‘on the ground’ gauge of how fast economies are reopening. To be sure, if lockdowns are relaxed when infections are still high, the fear factor among the public could remain elevated with little increase in people mobility.

For example, in Brazil, a survey in June by pollster Datafolha showed that 65% people believed the COVID-19 outbreak was worsening and 52% disagreed with the easing of social distancing measures by some state governors and mayors, while 42% agreed. Conversely, in some countries, an overzealous public may front-run the official lockdown relaxation. 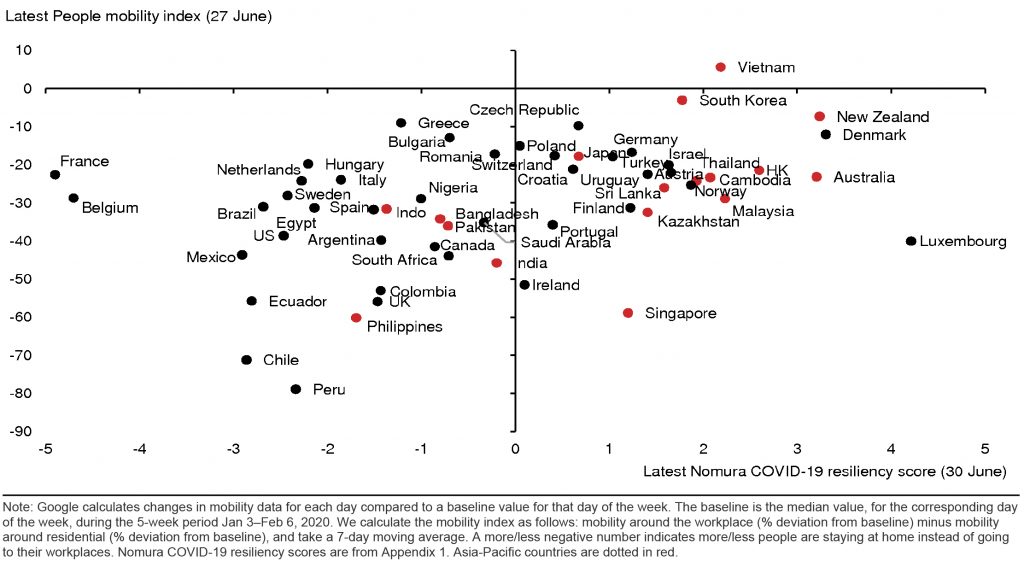 Various reasons have been offered for Asia’s relative resilience to COVID-19, including greater preparedness (thanks to the SARS experience), faster government responses, a more compliant culture, greater use of face masks and greater deployment of digital technology for tracking and tracing.

China’s policy stimulus is more than meets the eye

China’s initial fiscal and monetary policy response to COVID-19 was more measured than most countries over fears of stoking another debt-fuelled, property price bubble. Beijing also understood that deploying demand-side policy stimulus in the first quarter would have had little impact amid closed factories and shopping malls; it would be like pushing on a string. However, we believe that China has more recently started to ramp up policy stimulus, and we expect a further acceleration in the third quarter.

China’s National People’s Congress held in late May was an important marker for this policy pivot. The media focused on the government abandoning its GDP growth target for the first time, but more interesting to us was the government subtly adopting—also for the first time—an open-ended budget deficit target for 2020 of “at least” 3.6% of GDP, and aiming for “significantly higher growth of M2 and outstanding aggregate financing this year” than the respective growth rates of 8.7% and 10.7% in 2019.

People mobility was increasing in May, so the time was ripe to focus more on rebooting demand.

China has among the world’s most opaque economic policies. Interest rates are only one of many policy levers used for monetary easing and, on the fiscal side, the reported budget deficit is only the tip of the iceberg. For example, this year most economists expect that, once special government bond issuance is included, the budget deficit will be 6-7% of GDP and, if local government financing vehicles and other off-balance sheet items are included, the final size could be double that.

Furthermore, we believe Beijing could accelerate its policy stimulus even further; indeed, the People’s Bank of China cut its relending and re-discounting rates by 25 basis points on 1 July. China’s production and infrastructure spending are recovering, but domestic consumption—the largest component of GDP—has lagged.

China’s economy started reopening two months earlier than the US, yet Chinese consumption has not rebounded as strongly as in the US. China has a weak social safety net (such as unemployment insurance benefits, public health and pensions) which, together with high unemployment (including uncounted migrant workers who have not returned to work) and the fact that Beijing so far appears unwilling to make a headline-grabbing announcement on major policy stimulus, explains why households have become more cautious.

A survey by the National Bureau of Statistics shows China’s consumer confidence has yet to rebound (again, unlike the US), and Beijing was recently forced to lockdown parts of the capital again due to risks of a second wave, which cannot be good for already-fragile confidence.

China cannot count on a strong rebound in foreign demand—indeed, we expect China’s export growth to weaken in coming months—and it is conceivable that consumer demand is even weaker in underlying terms if recent data were flattered by an unsustainable burst of pent-up demand.

Against this backdrop, we believe that policymakers will soon revert to the traditional model of emphasising economic growth over financial stability risks, resulting in an acceleration in policy stimulus in the third quarter. A stronger domestic demand-led recovery in China’s economy in the second half of 2020 would be a shot in the arm for the rest of Asia.

A silver lining for Asia

Asia is facing a more favourable terms of trade than other emerging market regions, thanks to resilient global electronics demand and low oil prices. Working from home has buoyed the global demand for digital communication equipment, software and data storage. Preparations for 5G networks are also accelerating, including the production of new 5G-enabled smart phones. Electronic components and products are the mainstay export of many Asian countries and they have been an important buffer for the region amid COVID-19. With 5G, the outlook remains bright.

Meanwhile, low oil prices are a boon for Asia’s predominantly net oil importing countries, as opposed to the large oil exporters in the Middle East, Russia and parts of Latin America. Similar to policy stimulus, the impetus to Asia’s economies from lower energy costs—it can be thought of as a tax cut for the region—will kick-in more strongly as the public fear factor fades and economies reopen.

Additionally, capital inflows to Asia have significant scope to intensify. In response to the pandemic, the G4 central banks – the Fed, ECB, BOE and BOJ – quickly restarted quantitative easing on a much larger scale than during the global financial crisis. From September 2008, it took over six years for total assets of the US Fed to increase by $3.6 trillion, whereas in just the past four months total assets increased by $2.9 trillion, 16x faster. Also, this time the major central banks are not only purchasing government bonds; they have moved further out on the risk curve. A likely sustained period of ultra-loose monetary policies in the US, Europe and Japan—home to bulk of the world’s financial wealth—should push investors into riskier assets and, if the last experience of quantitative easing is any guide, it will include a hunt for yield into emerging markets’ higher-yielding assets.

In addition to the quantitative easing-push factor, Asia is well placed to attract a disproportionate share of EM inflows because of a pull factor: on a risk-adjusted return basis, Asia stands out thanks to its better (or probably better described as less ugly) economic fundamentals. In the face of robust capital inflows, we would expect some FX intervention by Asian central banks to slow the pace of currency appreciation and build-up precautionary FX reserves. Moreover, Asia’s central banks could opt for unsterilised FX intervention in order to free-up liquidity, given the massive government bond supply that lies ahead.

A stronger domestic demand-led recovery in China’s economy in the second half of 2020 would be a shot in the arm for the rest of Asia.

Furthermore, a growing number of emerging market central banks have embarked on unconventional monetary policy for the first time by purchasing government bonds, signalling that they are willing to take the role of a buyer of the last resort. The rationale is clear. Fiscal deficits are ballooning and, in the face of massive government bond supply, central banks can help contain the rise in sovereign bond yields.