There is more to ambiguous central bank communication than meets the eye
25.05.2021
Robert SubbaramanManaging Director, Head of Global Macro Research at Nomura

The Federal Reserve building in Washington DC. Photo by Shutterstock.

“Since I’ve become a central banker, I’ve learnt to mumble with great incoherence. If I seem unduly clear to you, you must have misunderstood what I said” – Alan Greenspan in address to Congress, September 1987.

Central bank communication can be intentionally ambiguous to allow it more flexibility, especially in times of high economic uncertainty. Delphic Fedspeak was in full display in the minutes from the April Federal Open Market Committee (FOMC) meeting: “A number of participants suggested that if the economy continued to make rapid progress toward the Committee’s goals, it might be appropriate at some point in upcoming meetings to begin discussing a plan for adjusting the pace of asset purchases.” How many is ‘a number’ – is it 2, 3, 5 or more? What exactly does ‘rapid progress’ mean? And does ‘upcoming meetings’ mean the ones in June and July, or does it include September too?

It is in times like this when it can pay to dig deeper into past speeches of FOMC members, Fed transcripts and other information material in search of any clues on the Fed’s reaction function. In doing so, I came across some gold nuggets in the past speeches of Fed Vice Chair Richard Clarida that take some of the ambiguity out of Fedspeak, at least with respect to the Fed Vice Chair, a core member of the FOMC.

Consider these three exhibits to help decipher the Fed.

“Another factor I will consider in calibrating the pace of policy normalisation post-liftoff is the average rate of personal consumption expenditures (PCE) inflation since the new framework was adopted in August 2020” – Richard Clarida, 13 January 2021.

As inflation has run persistently below 2%, the Fed’s new monetary policy framework allows inflation to rise moderately above 2% for some time, so as to achieve its revised goal of inflation averaging 2% over time.

It will be interesting to repeat this exercise once the results of the June Bluechip survey are released, but it would seem that average 2% inflation, on Clarida’s measure, could be met in the second half of 2021. 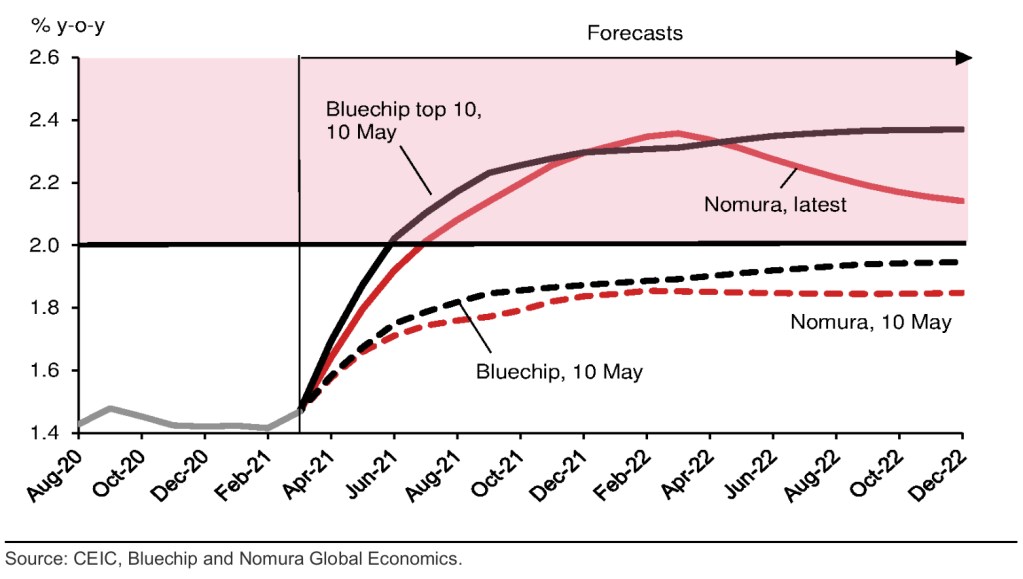 “In the case of the Federal Reserve, we have highlighted that making sure that inflation expectations remain anchored at our 2% objective is just such a consideration. Speaking for myself, I follow closely the Fed staff’s index of common inflation expectations as a relevant indicator that this goal is being met” – Richard Clarida, 13 January 2021.

The Fed staff’s index of common inflation expectations (CIE) is constructed using 21 inflation expectation indicators derived from surveys of households, firms, professional forecasters, as well as Treasury Inflation-Protected Securities (TIPS) financial market data. The Fed’s CIE is available only on a quarterly basis, and the latest reading was 2.01% for the first quarter of 2021, the highest level since the fourth quarter of 2014. Many of the higher frequency inputs to CIE have risen in recent months, suggesting that CIE could jump quite sharply in the second quarter (due 16 July), perhaps back up to the 2.1% level it sustained over 2002-13 (Exhibit 2). This would presumably be a positive sign to Clarida that inflation expectations are adjusting upward to the Fed’s longer-run goal of 2% inflation. 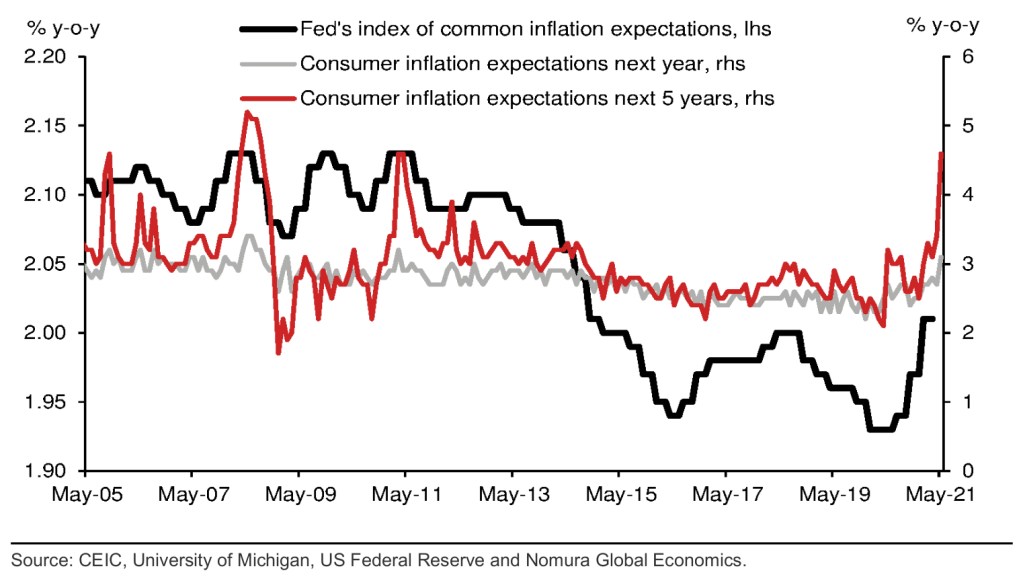 “In addition, in our December 2020 FOMC statement, the Committee combined our forward guidance for the federal funds rate with enhanced, outcome-based guidance about our asset purchases. We indicated that we will continue to increase our holdings of Treasury securities by at least $80 billion per month and our holdings of agency mortgage-backed securities by at least $40 billion per month until substantial further progress, measured relative to the December 2020 announcement [emphasis added], has been made toward our maximum-employment and price-stability goals” – Richard Clarida, 13 January 2021.

The Fed has provided consistent guidance that tapering of its asset purchases would only begin when ‘substantial further progress’ has been made toward its dual goals, and it is the employment shortfall—8.2 million jobs yet to be recovered from the COVID-19 shock—that is most pressing.

As discussed earlier, this is intentionally vague: substantial further progress from when? How much is substantial?

Clarida has helped clear the first question by referencing substantial further progress from December 2020. In an attempt to measure substantial further progress, we focus simply on non-farm payrolls. The outbreak of COVID-19 resulted in job losses of 22.4 million by April 2020. This shortfall had narrowed to 10 million by December 2020, the reference date mentioned by Clarida. If we assume that ‘substantial progress’ means reducing the shortfall by at least half and if we plug in the Bloomberg Consensus forecast of non-farm payrolls, then the achievement of substantially reducing the shortfall to five million job losses is not reached until September 2021 at the earliest (Exhibit 3).

The big caveat is that the US labour market has become very unpredictable—the Bloomberg consensus over-predicted job gains by 0.7 million in April—and so it will be more interesting to observe how this job shortfall path evolves with actual data.

Exhibit 3: Nonfarm payrolls job shortfall since the outbreak of COVID-19 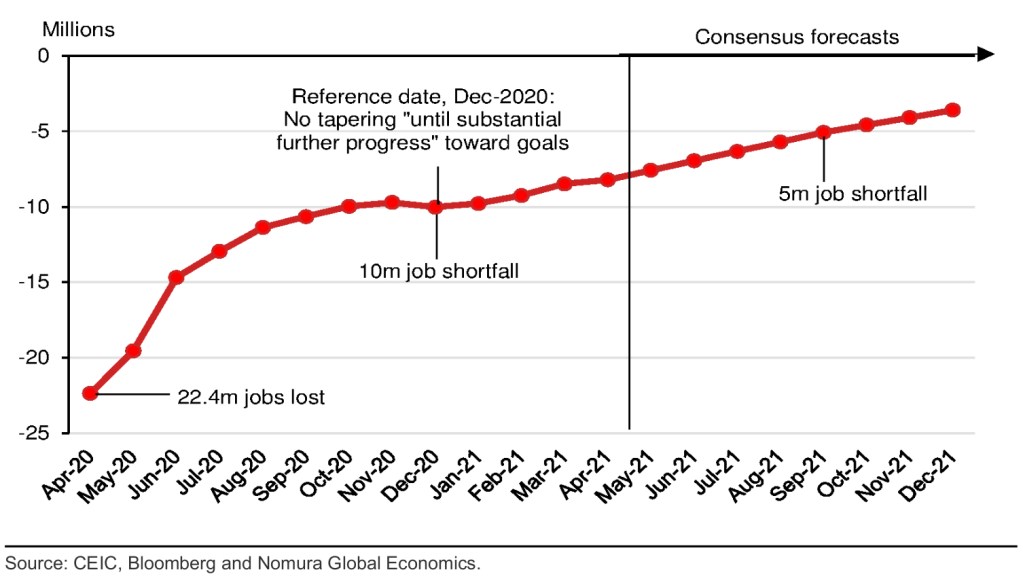 Fed guidance has been intentionally vague to buy it time and flexibility amid a very uncertain economic outlook. Still, Vice Chair Richard Clarida has provided three useful clues in how to interpret the Fed’s Delphic tones.

But even armed with these clues, it is difficult to pinpoint when the core FOMC members will shift to thinking about tapering, as so much still depends on actual data outcomes in coming months. Exhibit 1 on ‘average inflation targeting’ suggests it could happen as soon as the June FOMC, while Exhibit 2 on ‘inflation expectations’ points to the July FOMC, and Exhibit 3 on ‘substantial further progress’ suggests perhaps not until late August.

Ultimately, the timing and pace of Fed policy normalisation will depend on actual data outcomes, and not forecasts. The Fed is banking on a temporary surge in inflation but if it turns out to be persistent then, at some point, US monetary policy normalisation will probably need to be fast tracked which in all likelihood will be destabilising for markets. In this respect, when thinking about the Fed’s reaction, markets should pay heed to a quote often attributed to the late John Maynard Keynes, “when the facts change, I change my mind. What do you do, sir?” Central banks elsewhere can only hope that the Fed has got it right but they should also prepare for the worst. For central banks in emerging markets that means building up sufficient foreign exchange reserves in case there is a sudden stop in capital inflows as US bond yields rise.