COVID management, antimicrobial resistance and the pressures on healthcare systems

Elanco Animal Health’s chief medical officer speaks about the economics of an antibiotic, the impact of COVID-19 on antimicrobial resistance and how getting a vaccine does not mean a return to normalcy
28.07.2020
An interview with
Professor Shabbir SimjeeChief Medical Officer at Elanco Animal Health

A scientist works at a medical lab in Thailand. It takes 10 years for drug development. That means a decade is spent getting a drug from the bench to the market. Photo by Chokniti Khongchum on Pexels.

Elanco Animal Health’s chief medical officer speaks about the economics of an antibiotic, the impact of COVID-19 on antimicrobial resistance and how getting a vaccine does not mean a return to normalcy

In the first part of this interview, antimicrobial resistance (AMR) expert and Chief Medical Officer at Elanco Animal Health Shabbir Simjee talked about the reasons behind the high level of AMR in Asia, and the role of generics and poor regulation in aggravating this health problem.

In this second part, Dr Simjee speaks with Unravel’s Siddharth Poddar and Shivaji Bagchi about the impacts of increasing AMR on healthcare ecosystems, and how COVID-19 could exacerbate the problem.

Unravel: We’ve talked about the impacts of AMR on human health and wellbeing. What are its impacts on healthcare systems more broadly?

Shabbir Simjee: It’s putting a lot of pressure in terms of treatment options for patients. We’ve gone from mono therapy into combination therapies now. For a number of infections, especially in ICU settings, we often don’t go with one antibiotic – instead, we’re going with two or three at the same time to cover our bases. For example, if you have a patient with septicemia, it could take four to seven days to get blood results; and we don’t have that much time to wait till we start treatment. So we take a best guess as to which bacteria are likely to have caused septicemia, and go with the most likely drug that we know will work. And it’s usually not just one drug – it’s usually two or three drugs, in the hope that one of them will work. Now the more drugs we are using, we are actually putting greater selective pressure on the bacteria.

We’ve got resistance obviously because of all the drug usage, especially in the hospital setting. As bacteria become increasingly resistant, physicians don’t have an option but to use more potent or multiple drugs for the same infection, given that we have to make do with what is available, and frankly, we are using the same antibiotics for a number of decades now. One could ask why we don’t just develop more antibiotics? To be brutally truthful, it is all around drug development and return on investment (ROI).

A drug company basically has 10 years to recuperate about $350 million just in costs, and of course it needs an ROI for its shareholders. And it must do this in 10 years with an average patient who is going to use the product for five to seven days in a year at most.

Unravel: Can you explain the economics behind a drug reaching the market?

Dr Simjee: If we look at the process from bench to the market, a new antibiotic will set you back by roughly $350 million to $400 million. That’s a realistic cost. The day you discover your molecule, the first thing you want to do is patent it, so that no one else gets it. Your patent life is 19 to 20 years. Let’s say it’s a 20-year patent. Your first 10 years go in drug development. That means from getting that drug from the bench to the market we’ve spent 10 years, which means 10 years of the drug’s patent life are lost, and that leaves 10 years of drug saleability. Now, most people take antibiotics once a year for five to seven days. So, a drug company basically has 10 years to recuperate about $350 million just in costs, and of course it needs an ROI for its shareholders. And it must do this in 10 years with an average patient who is going to use the product for five to seven days in a year at most. If a drug company has that much money to invest, would it be logical to invest it in antibiotics or would it be logical to invest it in the making of a drug that a patient is going to use every day for a longer period of time – for example, for diabetes, hypertension, high cholesterol and the like?

If we look at the last three or four years, there have been at least two companies (Achaogen and Melinta) that launched a new antibiotic. However, both companies filed for bankruptcy. Because although they got the drug to market, there wasn’t enough use of the drug for them to keep their business sustainable.

It simply just boils down to ROI.

Unravel: Are you suggesting that as a result of this we are seeing many more generics in the market?

What happens is once you’ve lost the patent for your drug, smaller companies will start manufacturing the drug, bringing costs down. That’s what we are seeing a lot across Asia, resulting in too many generics. Where generic antibiotics are manufactured by multinationals, you will at least have consistency in terms of being bio-equivalent, but there are smaller local companies that seem to pop up in many Asian countries and their bio-equivalence is very, very questionable.

Unravel: It is said that COVID-19 is increasing the threat of antibiotic resistance, through the increased use of antibiotics. Can you explain in simple terms what is happening?

Dr Simjee: About 15% COVID-19 patients are ending up in hospital settings. Some may need only a respirator for a short period of time, and recover. But for some the infection is more severe and they end up in the ICU, requiring a ventilator. Due to weakening lungs, these patients are more prone to secondary infections which will typically be bacterial infections. To prevent these potential secondary bacterial infections, these patients will be put on antibiotics. To cover all bases, a range of antibiotics maybe given, putting more selective pressure on resistance development.

Due to this, there has been a lot of discussion about whether we are going to see a sudden increase in resistance post COVID-19. It’s too early to say, in my view. I suspect we may see a spike in resistance and that spike may or may not last, depending on what’s driving the resistance beyond just selective pressure.

Unravel: It seems clear that the increased use of potent antibiotics for COVID-19 patients could result in more resistance being formed. In this context, is it realistic to expect some change in approach at the moment, or not really?

Dr Simjee: No, it’s very difficult. I will give you an example purely from a European perspective. When we had hospitals that were inundated with COVID-19 patients at the height of the pandemic, the laboratory staff were almost entirely focused on COVID-19 identification and the labs were working at full capacity purely for COVID-19. The labs were so overwhelmed with the workload that they just couldn’t look into anything else. It comes back to manpower, the hospital capacity and so on.

The normal process would be that when a patient presents with serious and/ or complicated infections, we would take samples from the patient and send to the lab for bacterial identification and also do some testing to see which antibiotics are likely to work. Given that the labs were working at full capacity to identify COVID-positive cases, we had very little support to do bacterial identification and see which antibiotics were likely to work. Therefore, to a greater extent, doctors were flying blind and taking best educated guesses as to what bacteria where likely causing the infection and then what antibiotics were likely to work. And to cover our bases, we then would go in with the most potent antibiotic, thus adding selective pressure for resistance development to these potent antibiotics.

This is where early investment into resistance monitoring would be useful, as that would allow us to have baseline data to guide treatment rather than take an educated, yet blind, guess.

Unravel: In the past when we’ve had a health crisis such as SARS, a lot of the responses by the governments were dictated by science. In this case have governments relied enough on science? Or is our response being dictated simply by economic underpinnings?

Dr Simjee: Governments are listening to the science, but listening to it and acting upon it are two different things. They will take the science into consideration, definitely, but I think the level of risk a scientist is willing to take and the level of risk a government is willing to take are two different things. The science definitely pushes you to edge on caution. Science may say “we need a lockdown for two more weeks”, but from a government’s economic perspective, two weeks is a very long time.

I think we do understand that every government wants to open up. But there's a huge gamble you are taking there by even opening up two weeks earlier as you risk a major second peak or a second wave. It's a very fine line between when to and when not to.

From that perspective, I think we do understand that every government wants to open up. But there’s a huge gamble you are taking there by even opening up two weeks earlier as you risk a major second peak or a second wave. It’s a very fine line between when to and when not to. And to be honest with you, there’s just no right or wrong answer to this. It’s going to be trial and error, and my gut feeling is we’re just going to go down a path where we witness a series of openings and closings.

Unravel: Do you expect to see a vaccine developed for COVID-19?

Dr Simjee: I have faith that we will get a vaccine, but I think people are being misled or they don’t understand. People are assuming that the day we have a vaccine, everything’s going to go back to normal. I keep telling everyone that even if you vaccinate the whole world against coronavirus today, this is a virus and it will mutate. I don’t think this will be a one-time vaccination. We will probably need a vaccination programme requiring vaccination every few years.

So, as the proteins mutate, we have to create vaccines targeting new proteins on the coronavirus. This will be an ongoing battle now, similar to what we currently have with the influenza vaccine.

The first part of this interview can be read here. 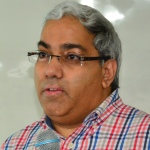 Professor Shabbir Simjee is chief medical officer at Elanco Animal Health and holds global responsibilities for its antimicrobial portfolio, from discovery through to post approval. Prior to this, he worked at the US FDA for three years at the Center for Veterinary Medicine, specifically looking at gene transfers between animal and human pathogens. Dr Simjee is past-chair of the VetPath program, a pan-European AMR monitoring programme, and past co-chair of the CLSI veterinary antimicrobial susceptibility testing sub-committee.