After two decades of strong gains, COVID-19 could plunge millions back into poverty
21.09.2021
Unravel editorial team

Poor children in masks during a covid awareness campaign at a slum in New Delhi. Globally, over 30% of extremely poor children live in India alone. Photo by Shutterstock.

COVID-19 disrupted businesses and upended livelihoods. The socio-economic impacts of the pandemic had a devastating result on the progress to achieve sustainable development goals (SDGs) in many economies. Until the pandemic, the progress had been mixed across economies in terms of implementing the SDGs. What is more worrying is that the pandemic threatens to reverse the good progress made in overcoming poverty, inequality and unemployment.

The full extent of the socio-economic impact of COVID-19 on developing Asian economies will not be known for a long time, but a dismal picture is starting to form. Across developing Asia, between 75 and 80 million people were pushed into extreme poverty in 2020 as a result of COVID-19, according to a recently released report by the Asian Development Bank (ADB).

Developing Asia was clearly making solid socio-economic progress. In the decades since 1990, its contribution to global poverty decreased steadily, as can be seen in Exhibit 1. Remarkably, since the introduction of the SDGs in 2015, the region was successful in reducing its share of global extreme poverty to 29.1% or 203 million people by 2017.

And quite commendable is China’s role in reducing overall poverty levels in emerging Asia. Between 1990 and 2016, China with its manufacturing prowess registered a substantial decline in poverty levels. From a high of 32% in 1990, it was below 1% in 2016.

Things were going well for developing Asia and then, the pandemic struck.

To put simply, under a baseline scenario conducted by the ADB, without COVID-19, there would have been an estimated 104 million people living in extreme poverty in Asia in 2020 – a large reduction of 51.2% from the 2017 numbers.

What the pandemic also resulted in was the surge in worldwide unemployment rates in 2020. In Asia, unemployment increased by as much as 20% in over a third of the 23 surveyed economies. Meanwhile, informal employment exceeded 50% in 14 of these economies, with millions remaining underemployed.

In certain emerging Asian economies, rural poverty rates were five to eight times higher than urban poverty rates. It was also higher among those who were unable to enrol for higher education.

Exhibit 2: Unemployment rates in economies of Asia and the Pacific 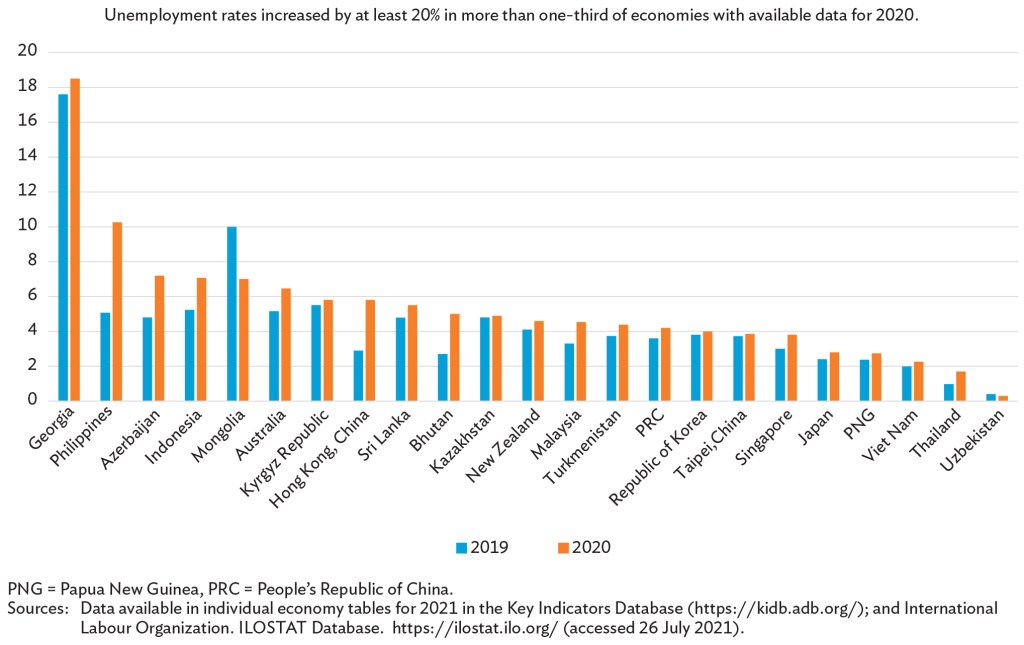 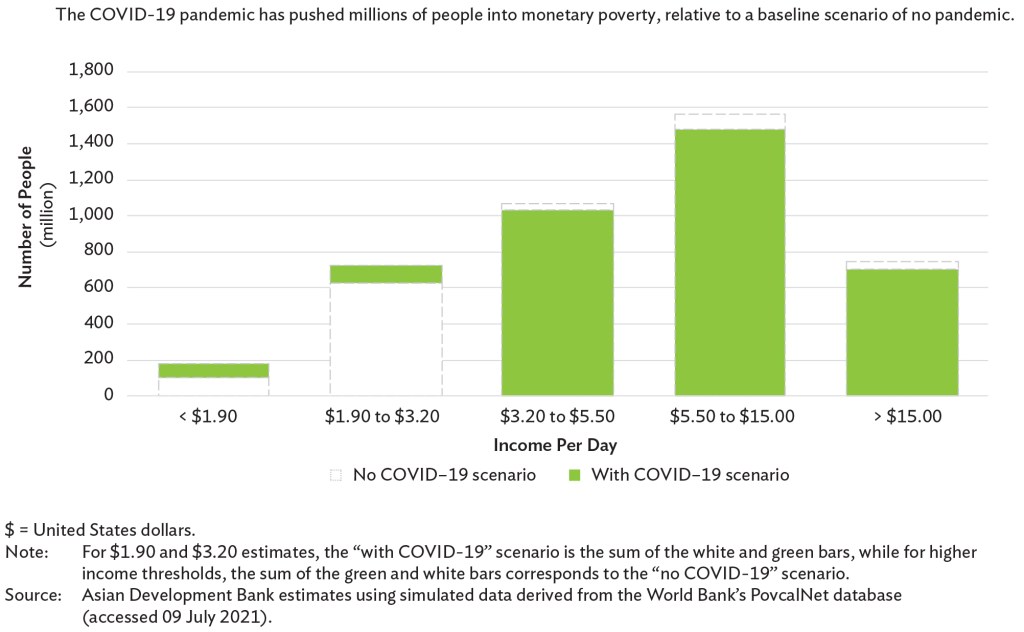 Higher incidences of extreme poverty occurred in rural areas, almost eight-fold higher than in urban zones. This trend was most pronounced in the Solomon Islands and Myanmar. The ADB’s Chief Economist Yasuyuki Sawada said, “Asia and the Pacific has made impressive strides, but COVID-19 has revealed social and economic fault lines that may weaken the region’s sustainable and inclusive development.”

The pandemic has catalysed and further widened inequalities. Inequalities had persisted for considerable time for millions even before the pandemic. The pandemic further heightened the income inequalities within the region. People living on less than $1.90-$3.20 a day have increased as compared to the reduction in the proportion of people earning higher incomes.

These wide differences in income inequalities were mainly driven by two major economies in Asia, China and India. Major economic disruption coupled with mishandling of the virus situation, particularly in India, led to further widening of income inequality across developing Asia in 2020.

Low-income households bore the maximum brunt of the pandemic. Considering the pre-notion of large-scale job destruction in the aftermath of economic catastrophes, developing Asia’s poverty position further worsened exposing many to the dangers of greater inequality.

Reduced incomes resulted in significant proportion of households experiencing financial difficulty, with reduced food intake or selling/pawning possessions to cope with the impact. In developing Asia, this proportion of population is evidently higher in the Philippines, reaching more than 60% of the population. Meanwhile, this proportion of households seem lesser in Myanmar, even though the country has low economic growth as compared with other developing Asian economies. 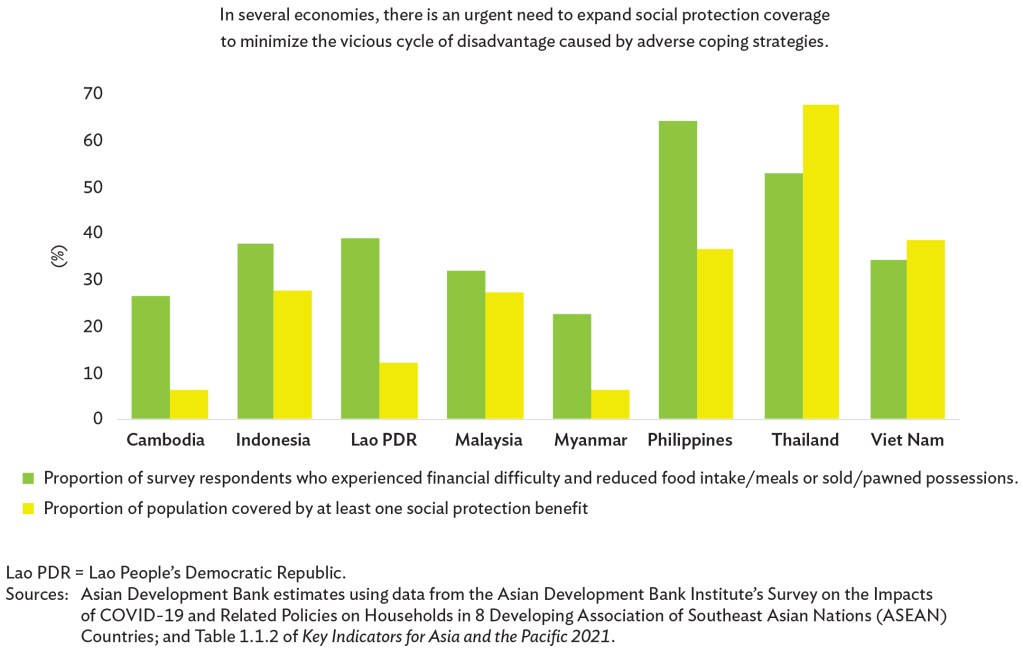 The situation in developing Asia is dire and is summed up aptly by Masatsugu Asakawa, President of the Asian Development Bank. He writes: “While progress before the pandemic varied across developing member economies, the pandemic has further widened these differences. Thus, the challenge of meeting development targets, which needed urgent attention even before the global health crisis began, has intensified…In the long run, disruptions caused by the pandemic are likely to have considerable adverse effects on human capital and productivity. Our region needs a people-centred development approach to recovery that ensures nobody is left behind.”