Corruption levels stagnate – much to overcome

While corruption takes vastly different forms across countries, this year’s scores reveal that all regions of the globe are at a standstill when it comes to fighting public sector corruption. Photo by Karolina Grabowska from Pexels.

Corruption levels have remained unchanged for the last 10 years, hovering at a 43% global average, finds the most recent edition of Transparency International’s annual Corruption Perceptions Index.

According to the report, 86% of countries have failed to make little to any progress in the fight against corruption—despite making commitments on paper—demonstrating a “complacency” that has helped undermine democracies and bolster the rise of authoritarianism.

The Corruption Perceptions Index is an annual index that ranks 180 countries and territories based on their perceived levels of public sector corruption. Each country receives a score on a scale of 0 to 100—where 0 is highly corrupt and 100 is very clean—based on aggregated data from a range of sources, including interviews with business people and country experts.

The CPI is then created by ranking each country based on their comprehensive scores. 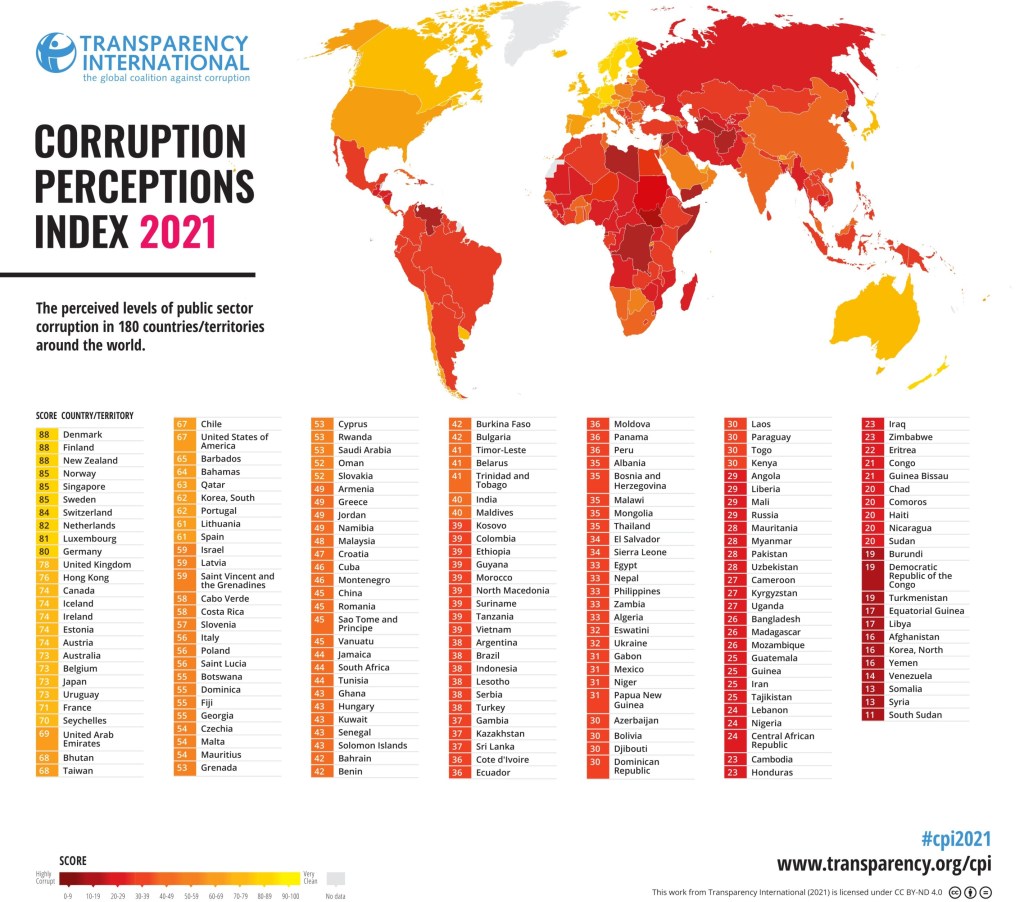 The landscape stays the same

Overall, much of the global landscape in the war against corruption has remained the same: countries in Western Europe and the European Union have the highest average scores (66 points) but more than two-thirds of countries (68%) scored below 50 points.

However, corruption isn’t just at a standstill, but is actively deteriorating in several democracies, driven by the slow erosion of civil liberties. The report also notes that even countries that score highly are not exempt, and have, in some cases, become safe havens for corrupt individuals. 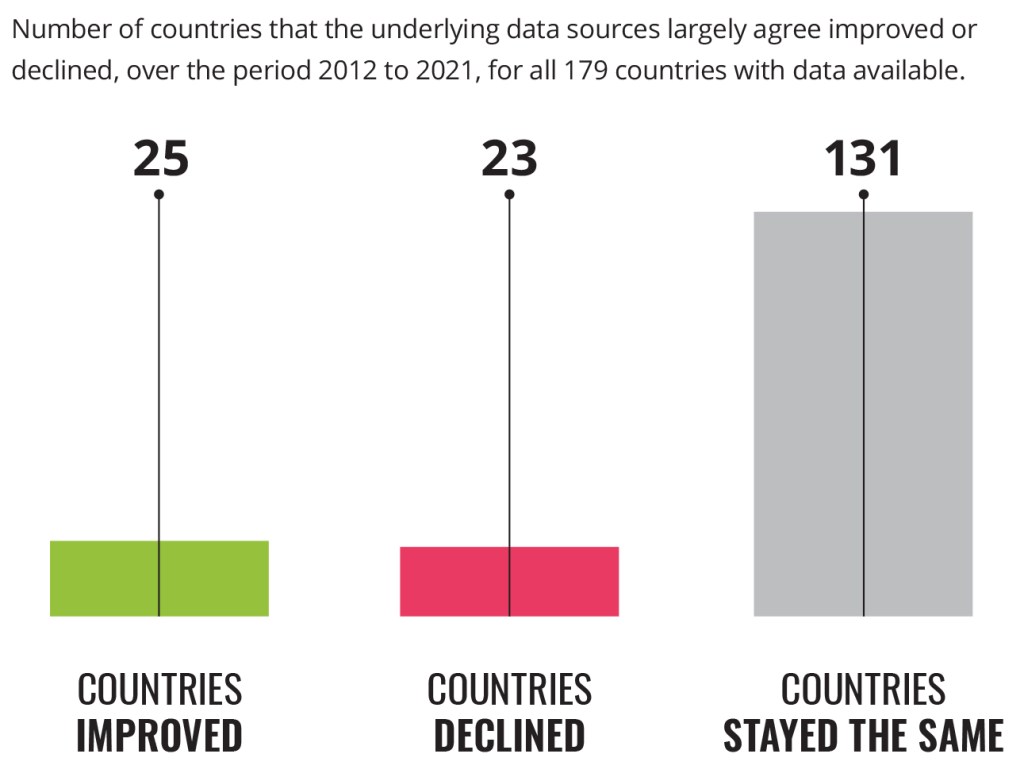 The most impressive progress has been made by Armenia, which has increased its score from 35 to 49 points over the last five years. Other significant movers include Angola (+10) and South Korea (+8).

On the other end of the spectrum, Canada has seen its score decline by 8 points since 2017, with some observers pointing to recent money laundering and tax evasion scandals as contributing to their poor showing. 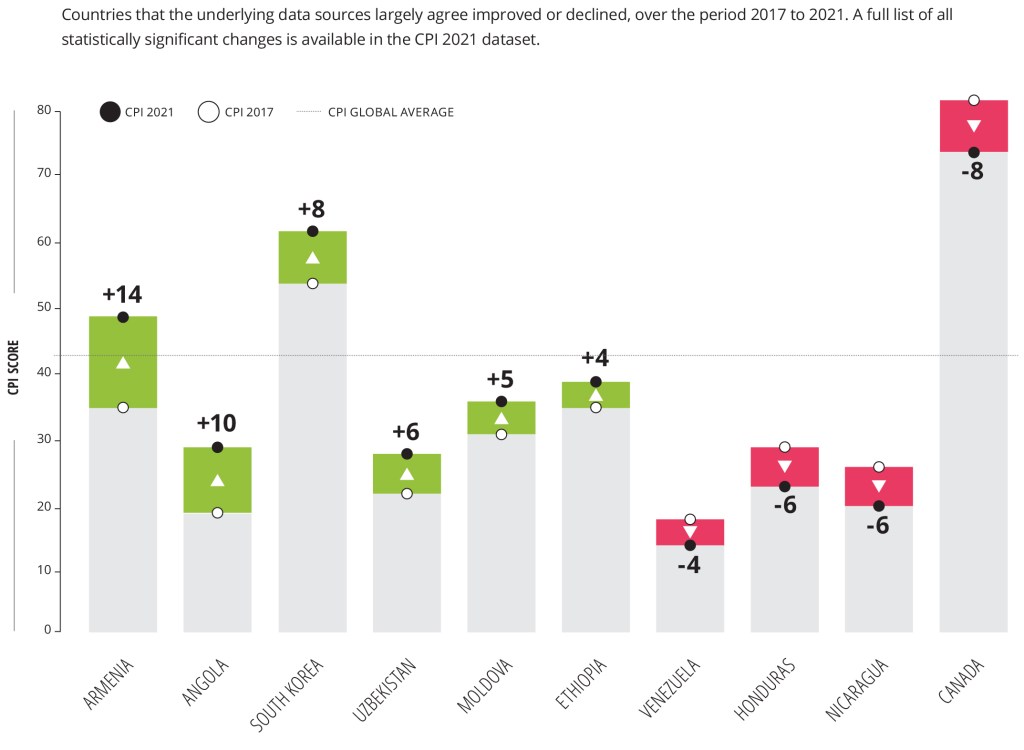 Transparency International’s report draws a direct connection between rising levels of corruption and the decline of human rights. Since 2012, the not-for-profit has kept track as civil liberties in 90% of countries have either stagnated or declined, fuelling an environment for corruption to flourish.

“Human rights are not simply a nice-to-have in the fight against corruption,” said Delia Ferreira Rubio, the head of Transparency International. “Authoritarian approaches destroy independent checks and balances and make anti-corruption efforts dependent on the whims of an elite. Ensuring that civil society and the media can speak freely and hold power to account is the only sustainable route to a corruption-free society.”

Furthermore, according to the Index, “Complacency in fighting corruption exacerbates human rights abuses and undermines democracy, setting off a vicious spiral. As these rights and freedoms erode and democracy declines, authoritarianism takes its place, contributing to even higher levels of corruption.” 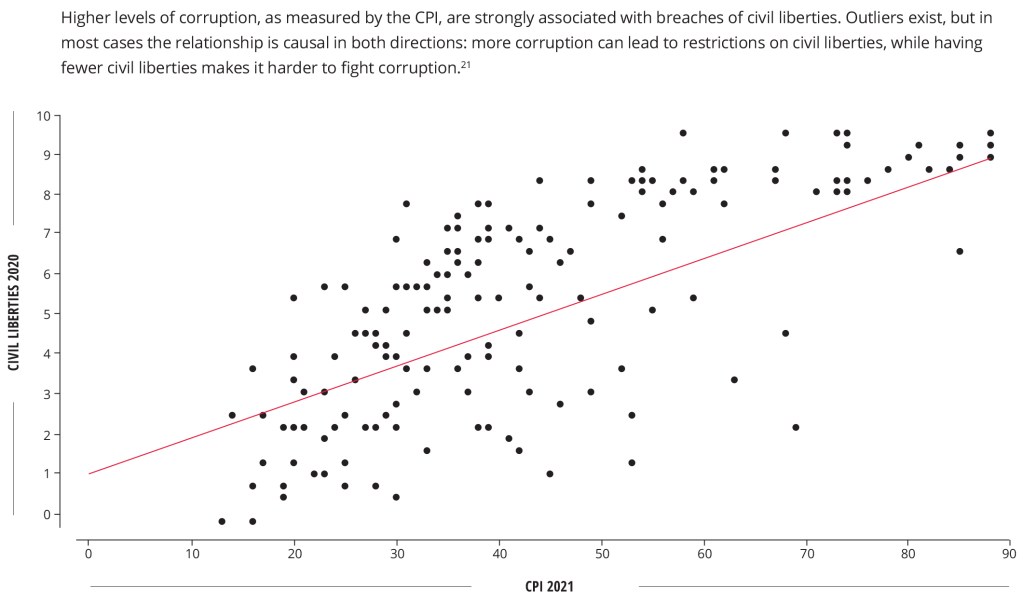 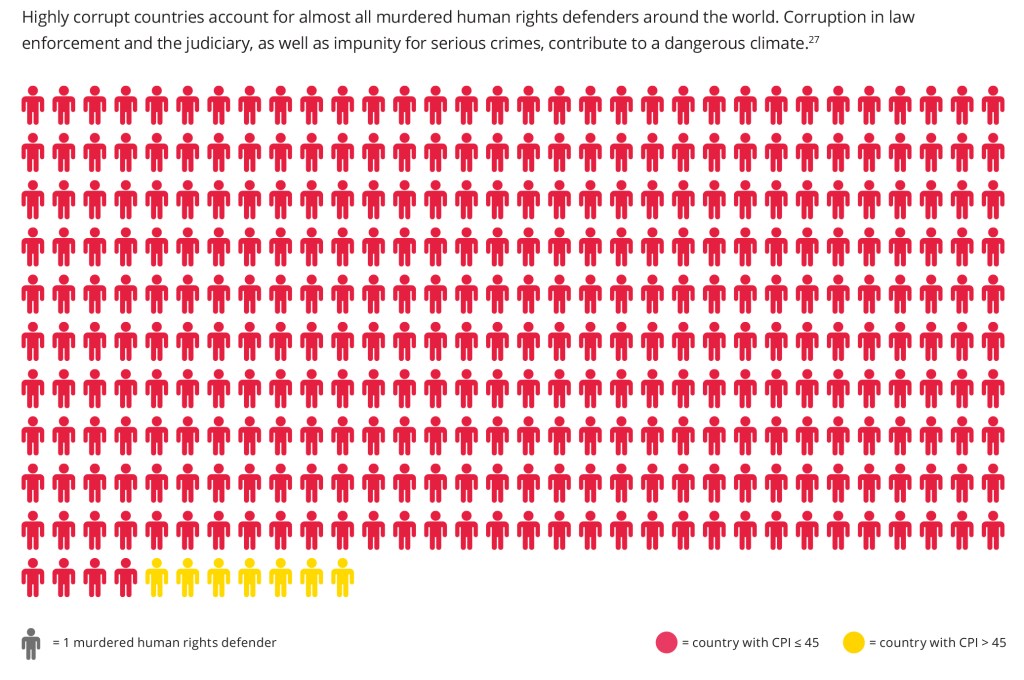 Though Western Europe & EU countries remain at the top of the index, they are struggling with the need for transparency and accountability in their pandemic response. Various reports have shed light on how COVID-19 and the scramble for resources has led to rising corruption risks in Europe. Notably, a fifth of UK pandemic-related contracts were said to have raised red flags for corruption.

That being said, Sub-Saharan Africa remains the global hotbed for corruption, as COVID-19 roils a region flooded with armed conflicts and terrorist threats that prevent anti-corruption efforts from taking hold. 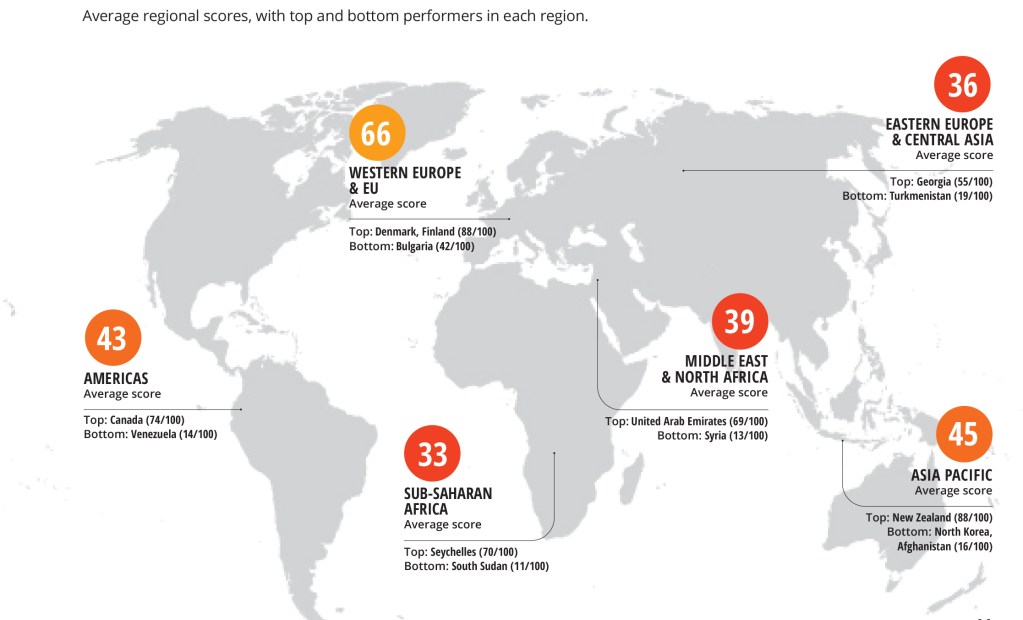 The region of Western Europe and European Union scored an average of 66 points. Denmark and Finland were the top scorers with 88 points and also globally, while Bulgaria was the least ranked country with 42 points, which was near to the global average.

In most regions, such as the Americas and Asia-Pacific, there is a significant gap between countries’ scores, leading to a middling average on the whole. For instance, the difference between Canada—the top scorer in the Americas—and Venezuela is 60 points. In Asia-Pacific, the gap is even bigger as Afghanistan and North Korea trail pack leader New Zealand by 72 points. 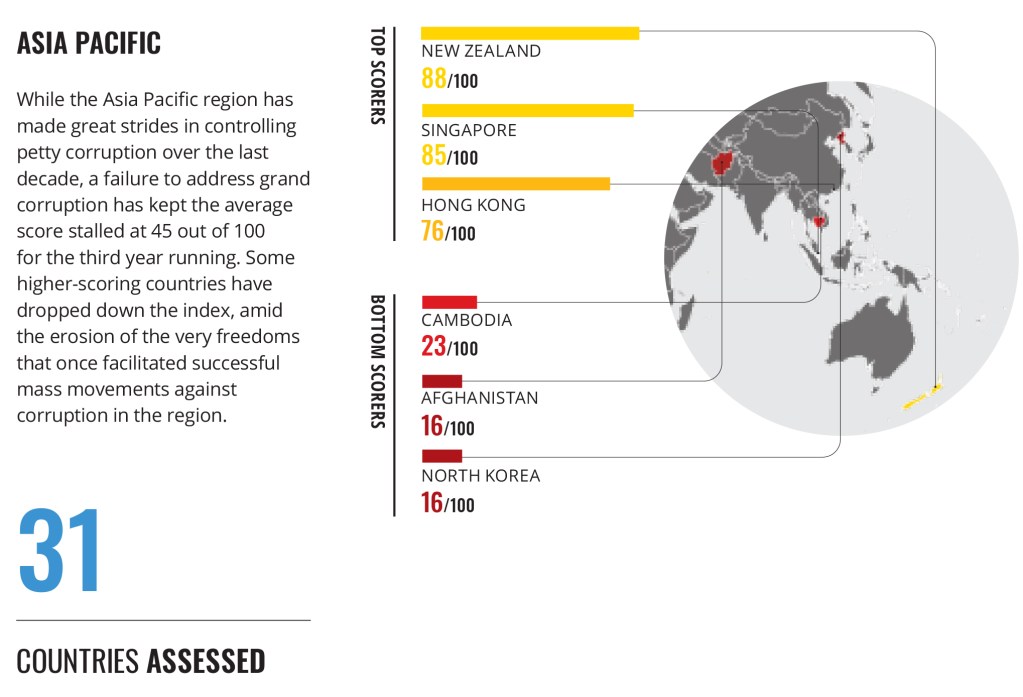 The gap is significantly smaller in Eastern Europe and Central Asia, and the Middle East and North Africa, where the average hovers between 35-40 points. The United Arab Emirates leads with 69 points, but these regions as a whole have low averages because of countries like Turkmenistan (19 points) and Syria (13 points).

Transparency International makes several recommendations as a remedy to the current state of affairs, but core to each one is a significant investment in the power of ordinary people.

“In authoritarian contexts where control rests with a few, social movements are the last remaining check on power,” said Daniel Eriksson, Transparency International’s chief executive. “It is the collective power held by ordinary people from all walks of life that will ultimately deliver accountability.”

These might look like laws that back up peoples’ right to assemble, more protections for freedom of expression, and more transparency into government spending.